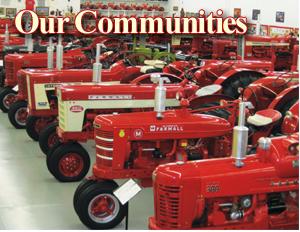 Staff photos/Mike Brownlee - A look from above at a row of tractors at Farmall-Land U.S.A. museum in Avoca. 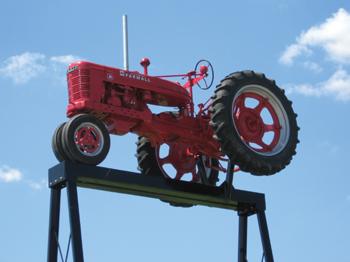 Staff photo/Mike Brownlee - An International Harvester Farmall tractor sits high above the sky outside the Farmall-Land U.S.A. museum in Avoca. 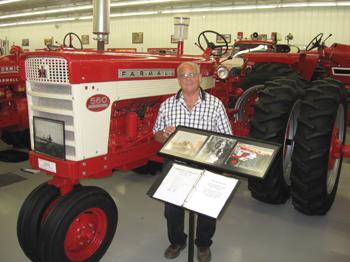 Staff photo/Mike Brownlee - Farmall-Land U.S.A. museum owner Jerry Mez stands with an International Harvester Farmall tractor that was owned by the father of Rebecca King, a Hancock native who won the Miss America crown in 1974.


AVOCA – The sign is red, with small print unreadable from most distances, especially to people passing by on Interstate 80. But for those drivers and anyone else who might spot it, the billboard does it by trumpeting the business it stands in front of.

The red International Harvester tractor sits on top of a platform, encouraging all who see it to stop by Farmall-Land U.S.A. museum.

“It’s something I’ve wanted to do from the beginning,” Jerry Mez, the 70-year-old owner of the museum, said of his brand new sign.

The Farmall-Land U.S.A. museum, 2101 N. Lavista Heights Road, is situated at the intersection of Interstate 80 and Highway 59, just off of interstate exit 40. Mez and his wife, Joyce, opened the museum in 2005 and have had two additions constructed since, to bring it to its current 26,500 square feet of tractor “worship.”

Narrow front wheels identify Farmall tractors, which are used for row crops. They make up the majority of the museum’s tractors. The museum also features pedal tractors, toy tractors, pulling tractors and tractor literature and memorabilia.

“It’s my life,” Mez said of his love of tractors. “Since I was 3 years old, every thing I have is attributable to farm equipment.”

When Mez was 3, his father moved the family from Fall City on the southern tip of Nebraska to Avoca to open a tractor and farm equipment dealership, Avoca Implement. The business eventually expanded to Greenfield Implement and, for a time, Atlantic Implement.

The business stayed in the family until two years ago, when Mez sold Avoca and Greenfield Implement to Titan Machinery to focus full-time on the museum.

Though it opened five years ago, the museum has been in the works for much longer. Mez said he started his International Harvester collection in 1970. The museum idea followed shortly thereafter.

“It’s been my dream for 40 years to do this,” Mez said. “Since I started collecting.”

The museum has had patrons from 49 states, with Georgia the only one yet to be crossed off the list, Mez said. People from 16 foreign countries have stopped by, including England, France and a group from Sweden that left behind a pair of clogs for Mez, which are displayed.

Mez said that he is still fascinated by the things he collects.

Walking through Farmall-Land U.S.A. museum, Mez stops often to point out items or give background facts. He points out a humorous painting depicting a lost Budweiser deliveryman getting directions in 1933 farmland America. Mez shows off a 1927 International truck, the oldest passenger vehicle he has in the museum.

He also stops to point out a 1919 International Harvester Titan 10.20 tractor that has metal wheels – “Could you imagine riding on a hard surface in one of these? Those guys had to be tough.” An old wheat threshing machine, made entirely of wood, is something he stops by to marvel at.

“Which doesn’t seem possible,” said Jerry while rattling off his children’s ages. “That makes me older.”

Joyce’s stamp on the museum is the area where patrons can take a load off before hitting the next section of tractors. The “Tractor Widows Lounge” features a selection of dolls from Joyce’s collection and other collectables.

“We had a lady from Missouri stop by,” Joyce Mez said. “She said, ‘You need someplace to sit while the men look around.’ So we put it in.”

Added Jerry: “One of the best ideas I never had.”

On a quiet Tuesday afternoon people milling about at the museum take in the numerous wall paintings and pictures, in addition to three small-sized tractors used by Jerry and his sons to win several tractor-pull trophies.

Ron Christensen, 72, has stopped by on his way home to Manilla after a trip to Omaha. He said he’s known Jerry a few years.

“But I didn’t realize he had all this,” Christensen said. “It’s amazing, I tell you what. I think it’s quite a show.”

Staff photos/Mike Brownlee - A look from above at a row of tractors at Farmall-Land U.S.A. museum in Avoca.

Staff photo/Mike Brownlee - An International Harvester Farmall tractor sits high above the sky outside the Farmall-Land U.S.A. museum in Avoca.

Staff photo/Mike Brownlee - Farmall-Land U.S.A. museum owner Jerry Mez stands with an International Harvester Farmall tractor that was owned by the father of Rebecca King, a Hancock native who won the Miss America crown in 1974.