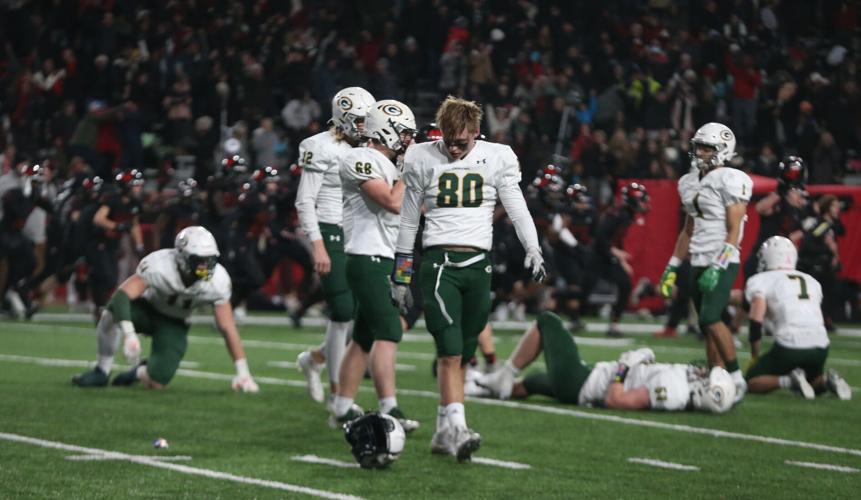 Gretna senior Ethan Stuhr (No. 80) drops his helmet as his teammates react to Omaha Westside senior Tristan Alvano's game-winning kick. The 45-yard field goal earned the Warriors a 43-41 win over the Dragons Monday night at Memorial Stadium in Lincoln. 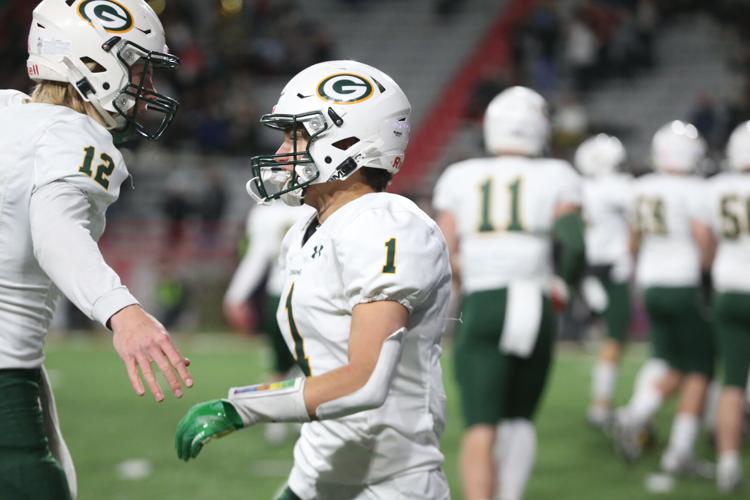 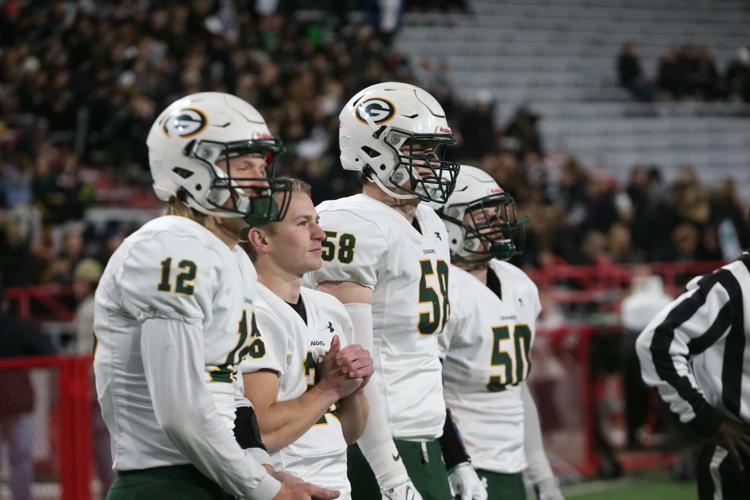 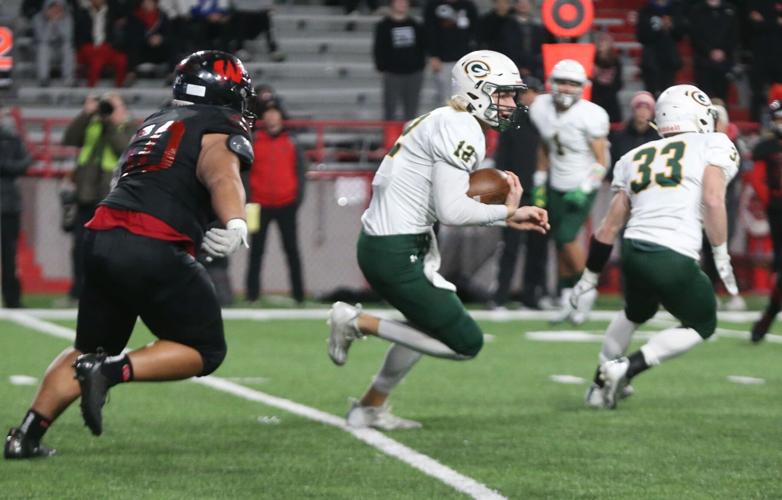 Gretna senior quarterback Zane Flores (No. 12) runs with the football during the Dragons 43-41 state championship defeat to Westside on Monday, Nov. 21 at Memorial Stadium in Lincoln.

LINCOLN – A game-winning 45-yard field goal sunk Gretna in the Class A State Championship Game at Memorial Stadium in a rematch against Omaha Westside.

Within three minutes of action, Monday night’s championship game already had more points than last year’s meeting between the Warriors and Dragons.

But the first interception by Caleb Benning -- back on the field after being out nine weeks with a broken collarbone -- set up the Warriors in plus territory after a five-yard score by Jahmez Ross. Anthony found his brother, Teddy Rezac, with a touchdown pass to put the Warriors up 21-7.

The next play from scrimmage, though, was a 80-yard bomb unleashed by Flores to Blayke Moore.

Before the end of the first, Rezac found Quinton Warren for a 64-yard passing touchdown to go ahead 28-14.

Another Benning INT on a wobbly pass by Flores once again set up Westside in good field position, but the Gretna defense finally held for a 44-yard field goal by Tristan Alvano.

“Benning is a really good defensive back,” Gretna head coach Mike Kayl said. “So they got him back and he just read the passes and jumped them and made some really nice plays there.”

Gretna trimmed the deficit to 31-21 at halftime with a short touchdown pass from Flores to Ethan Stuhr.

In between three field goals by Alvano, Flores ran in a seven-yard touchdown with a second effort to cut the deficit to 34-27.

Westside couldn’t capitalize after Flores’ third INT, and the Dragons narrowed the score again to 40-34 with a run by junior Isaiah Weber.

After a quick stop, Gretna got the ball back, and Flores was folded in half but somehow still made a 54-yard pass to Moore. The deep pass set up another Weber run, this time from 14, and a Cameron Bothwell extra point gave Gretna the lead with 1:55 left.

“No matter what situation this team is in, they’re always battling, persevering through whatever adversity strikes,” Flores said. “That's what makes this team so special. I mean, I grew up with all of these guys my entire life. So I'm super, super proud of them.”

Trailing 41-40, the Warriors began at their own 33 after a good return. Nine plays later, Alvano sent the game-winning field goal through the uprights, clinching their fourth Class A title and sending Gretna to defeat.

“It's tough because it's such a good group of kids and so much heart, to battle like that and put themselves into a chance to win the ballgame,” Kayl added. “But credit to them they got it down, they got a really good kicker and they made the plays at the end but very proud of our kids.”

With the final also being Gretna’s last as a one-team town, Kayl was grateful for the support

“It's a special community, and obviously then being the last game for the one school, the crowd showed out  time and time again,” the Dragons head coach said. So I can't say enough about the people of Gretna and how they support their kids and their school and I know that they're proud of the kids, even though we didn't quite get it done tonight.”

Kayl added that it will be tough to see seniors like Flores, Moore, Stuhr, Mason Goldman and Korver Demma go, but is excited for their futures and for the future of Gretna.

“Not only just such good football players, but they're such good kids and they've been just so good for our program on and off the field,” Kayl said. “We got to have other guys step up, we're looking forward to seeing what those guys (seniors) do at the next level. A lot of those guys are gonna go play college football and then the younger guys just have to learn from that and understand what it takes to get to that point.”

A Gretna family is opening up a gourmet cookie store the week after Thanksgiving.

Sarpy County continues a healthy pace of growth in spite of inflation, supply chain problems and potential labor shortages, according to the i…

Mayors share progress over past year in Sarpy County

Sarpy County’s five municipalities are going into 2023 on strong footing, along with two counterparts in Douglas and Cass Counties.

Lincoln Southeast’s defense was tough to break through, but Gretna senior Tyson Boganowski made big plays in all three phases as the Dragons a…

The elves at the Gretna Volunteer Fire and Rescue Department will host Santa at the new station on Saturday, Dec. 10.

FOOTBALL: High expectations for Gretna as they begin reclamation quest in playoffs

With expectations high to return to the Class A State Championship Game, No. 2 Gretna begins their playoff journey at home against Lincoln Southeast Friday night.

The Heartland of America Band will perform four free family friendly shows for the holidays.

Gretna senior Ethan Stuhr (No. 80) drops his helmet as his teammates react to Omaha Westside senior Tristan Alvano's game-winning kick. The 45-yard field goal earned the Warriors a 43-41 win over the Dragons Monday night at Memorial Stadium in Lincoln.

Gretna senior quarterback Zane Flores (No. 12) runs with the football during the Dragons 43-41 state championship defeat to Westside on Monday, Nov. 21 at Memorial Stadium in Lincoln.