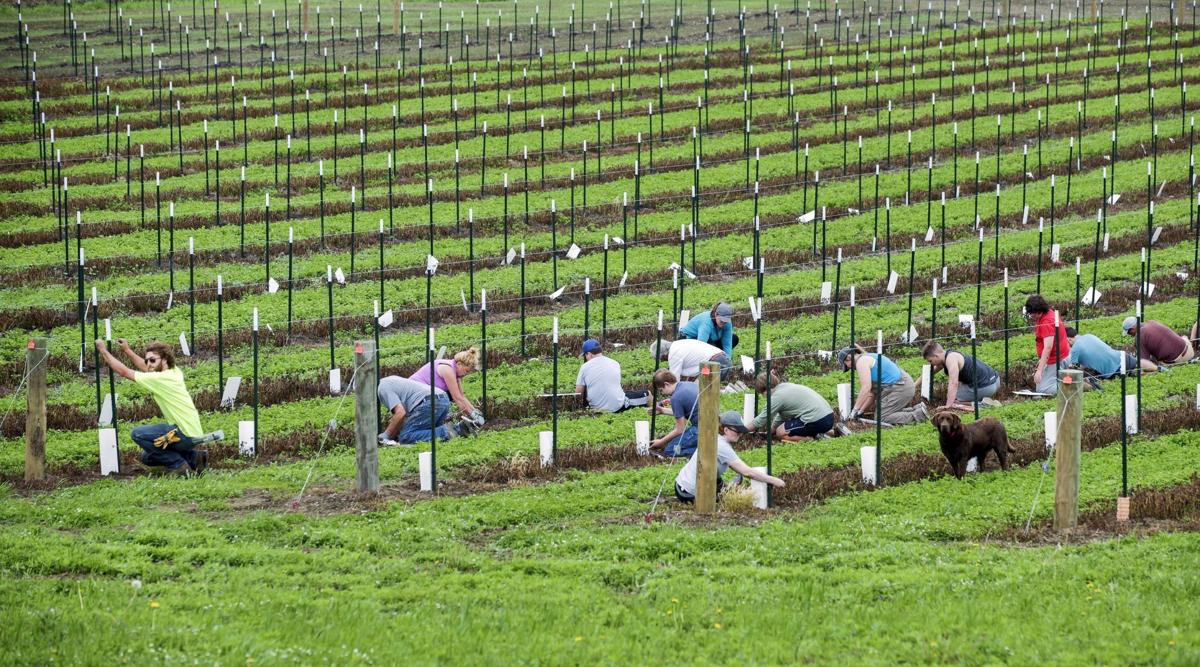 Workers plant grape vines at Fireside Winery’s five-acre expansion at the Brickyard Vineyard in Marengo, on May 25. 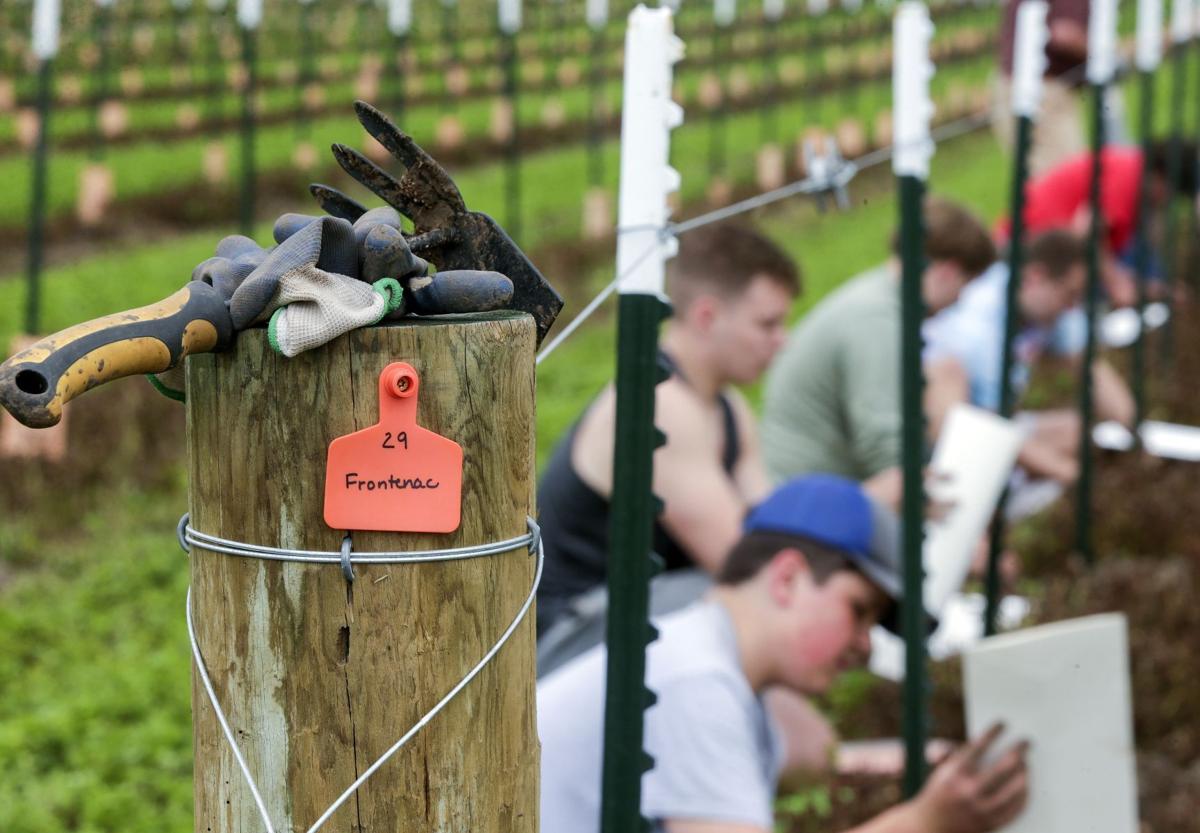 Workers plant a row of Frontenac grape vines at Fireside Winery’s five-acre vineyard expansion at the Brickyard Vineyard in Marengo, Iowa, on May 25, 2021.

Iowa wineries adapted in 2020 with home wine deliveries, virtual tastings and intimate outdoor gatherings, but many winery owners are gearing up for a rebound in large events — where most native wine sales occur.

“We’re expecting this to be a busy summer,” said Cassie Bott, operations manager for Fireside Winery in Marengo and Ackerman Winery in Amana.

“We started our live Sunday afternoon music a couple weekends ago and we’re hosting a lot of private events,” she said. “We’re already busy and then this adds to the complexity of things, but that’s good.”

By “this,” Bott was referring to 3,500 new grape plants they planted this month. The expansion, which involves row after row of tiny grapevines in protective tubes, will require watering, weeding and spraying for Asian beetles.

Once the plants are big enough, staff will train the vines along wires in anticipation of viable fruit in a few years.

The five-acre expansion costs about $50,000, partially funded with a local grant.

Although liquor sales in Iowa were up by 8.2% in fiscal 2020, to a record $367.3 million, beer and wine sales were down. Sales of native wines — the wines produced at about 100 Iowa wineries — were down 32% this past year, the Iowa Alcoholic Beverages Division reported in December.

The division issued 66 on-premise permits for native wines in fiscal 2020 compared to 96 in fiscal 2019.

After a “really hard” year, some Iowa winery owners are seeking to sell their operations, said Nicole Eilers, marketing director for the Iowa Wine Growers Association.

“I haven’t heard of any that had to close permanently because of COVID, but there are a few looking to find the next succession of winery owners,” she said.

Eilers said she was impressed by the tenacity of Iowa winery owners during the pandemic. Many sought forgivable loans through the federal Paycheck Protection Program to keep paying workers — who often are the owners themselves — and they sought new ways to serve Iowa customers, she said.

House File 766, signed by Gov. Kim Reynolds May 10, allows a third party, such as Grubhub or DoorDash, to deliver alcoholic beverages. Another bill, House File 768, permits Iowa wineries, breweries and distilleries to have a second retail location in addition to their winery.

“It’s a huge win for our industry,” Eilers said. “For us, the intent of it is because vineyards usually are in rural settings. It’s hard for wineries to draw people sometimes out in the middle of nowhere. This would allow, say, whatever winery to have a second location in Des Moines or Cedar Rapids or wherever.”

Many of Fireside’s grapes are planted off a gravel road a few miles from its retail location, where it hosts live music, weddings and other events. Bill and Rona Wyant, who opened the winery in 2007 to diversify their traditional corn and soybean farm, were advised to put the winery on a paved road.

“That was the right decision,” Rona said as she drove an all-terrain vehicle through the rows of mature grape plants with names such as Brianna, Frontenac, LaCrescent and LaCrosse. Cassie Bott, Wyant’s daughter, stepped off the vehicle for a moment to pull a stem of tiny Brianna grapes, still early in their seasonal development, to show a reporter how tightly they are clustered compared to other varieties.

The winery business is a family affair. Bill grows the grapes, Rona does the books, Cassie manages retail and Cassie’s husband, Zach Bott, is the winemaker.

Zach created a winner with Fireside’s Storyteller wine, which won the top prize at the Wine Growers Association’s commercial wine competition in March. Storyteller, a blend of Vignoles and St. Pepin grapes, won both the Governor’s Cup and the Best of Show award for white wines.

Iowa wineries submitted 186 wines for the competition, judged “blind” by a panel of seasoned wine retailers, sommeliers and industry experts, the association reported.

The Wyants and Botts have a new apprentice, Eben Senft, who is part of the Wine Growers Association registered apprenticeship program that allows people interested in working at an Iowa winery to earn certification as a cellar worker, winemaker or vineyard manager.

In 2015, the Wyants and Botts purchased Ackerman Winery, Iowa’s oldest winery, opened in 1956 by Harry and Louisa Ackerman. The winery’s focus always had been fruit wines made with dandelion, rhubarb, raspberries, blackberries and plums. The new owners did not change that, but just added some new fruits, including cranberries, mangoes and elderberry.

“The two wineries complement each other,” Rona said.

But Iowa wines have gone beyond dessert with more grape varieties that can withstand Iowa’s cold winters and short growing seasons. A new grape Fireside planted this spring is Frontenac blanc, which has durable vines that can hang tight through frost, according to Midwest Wine Press. The blanc grapes ripen earlier than other Frontenacs and can produce dry wines in addition to sweet.

“There are so many quality wines being produced here,” Eilers said of Iowa. “We want to get people out to try their local wines and see what they’ve been missing.”

Iowans can do that at the first Iowa Wine Festival series in June. That event will be June 13 at Park Farm Winery, west of Dubuque, and the second will be June 27 at Covered Bridges Winery, in Winterset.

Each event will feature wine tastings from more than two dozen wineries, live music, local food vendors and grape and wine education sessions. General admission tickets, available for purchase online, are $40 in advance and $50 the day of the events.

More than 40 types of cold-hardy grapes are grown in Iowa. Here are some of the most popular highlighted by the Iowa Wine Growers Association.

Catawba: This grape is technically a “red,” but its reddish-pink berries produce pale pink juice used in rosés or blends. LaCrescent: Produces a pale yellow wine similar to Riesling.

Frontenac: People who enjoy Merlot, will like rosé, red or port produced with Frontenac berries, which have a distinct cherry aroma.

LaCrosse: If you like Chardonnay, LaCrosse grapes produce a similar white wine that is often dry or semi-dry.

Vignoles: If you enjoy Moscato, Vignoles — pronounced “veen-yole” — is your grape. But they also can produce dry whites.

Rose Byrne explains why she and Bobby Cannavale have never married

Rose Byrne explains why she and Bobby Cannavale have never married

Iowan of the Day program returns for state fair

With the 2021 Iowa State Fair coming up, nominations for Iowan of the Day are now open.

Workers plant grape vines at Fireside Winery’s five-acre expansion at the Brickyard Vineyard in Marengo, on May 25.

Workers plant a row of Frontenac grape vines at Fireside Winery’s five-acre vineyard expansion at the Brickyard Vineyard in Marengo, Iowa, on May 25, 2021.