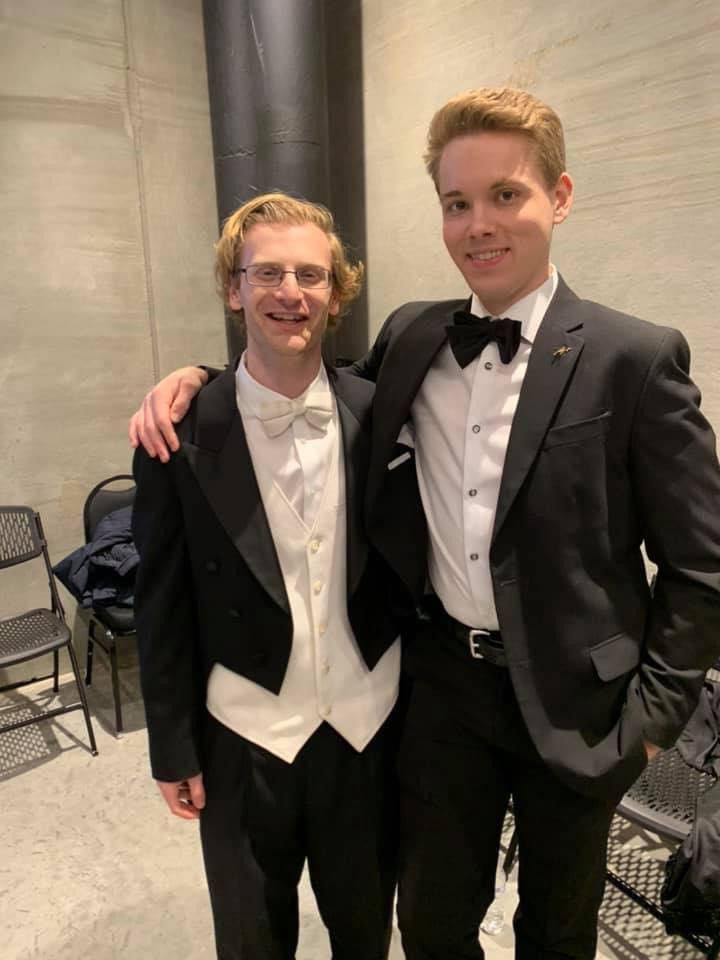 David Galant, left, and Alex Lunardi, right, before the opening night concert at the Hoff Family Arts and Culture Center. 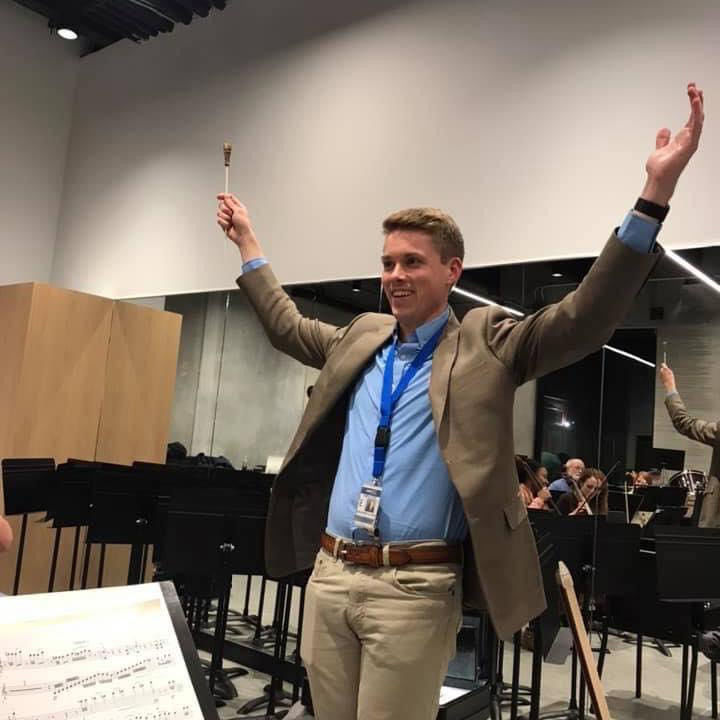 Alex Lunardi conducting the first rehersal in the new Hoff Family Arts and Culture Center in January of this year. 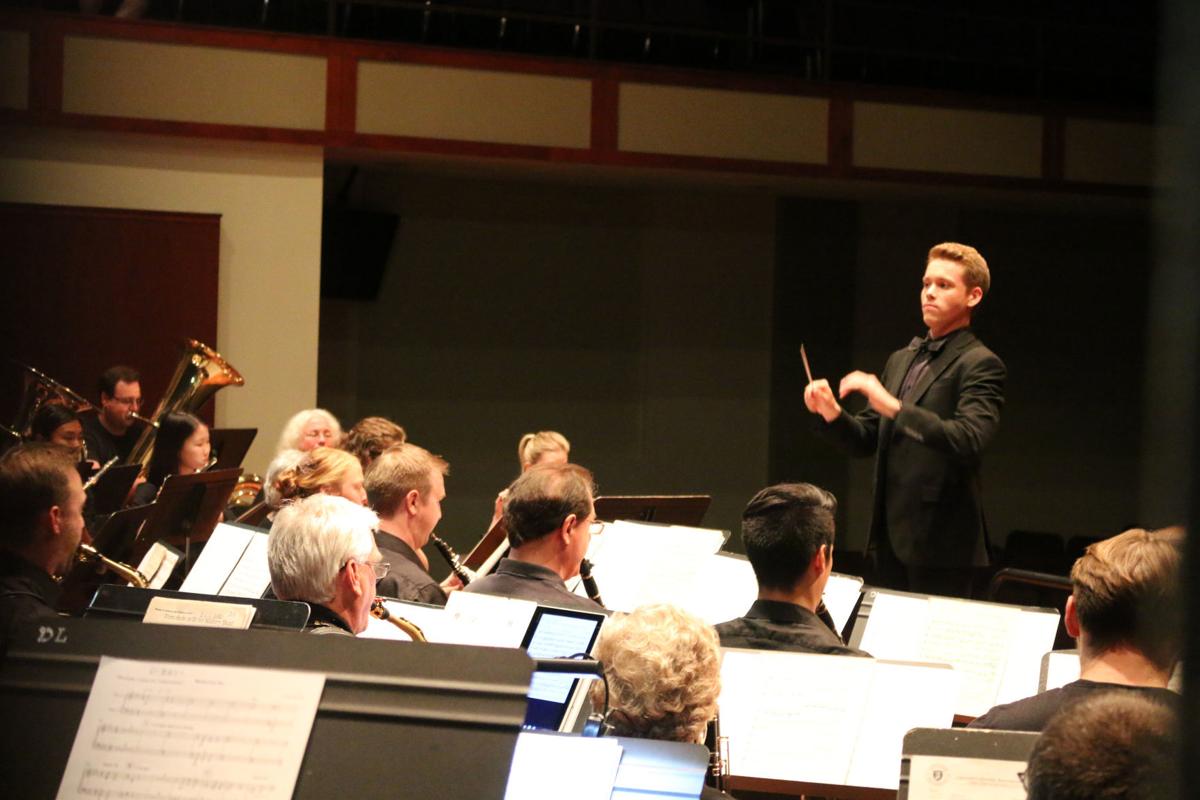 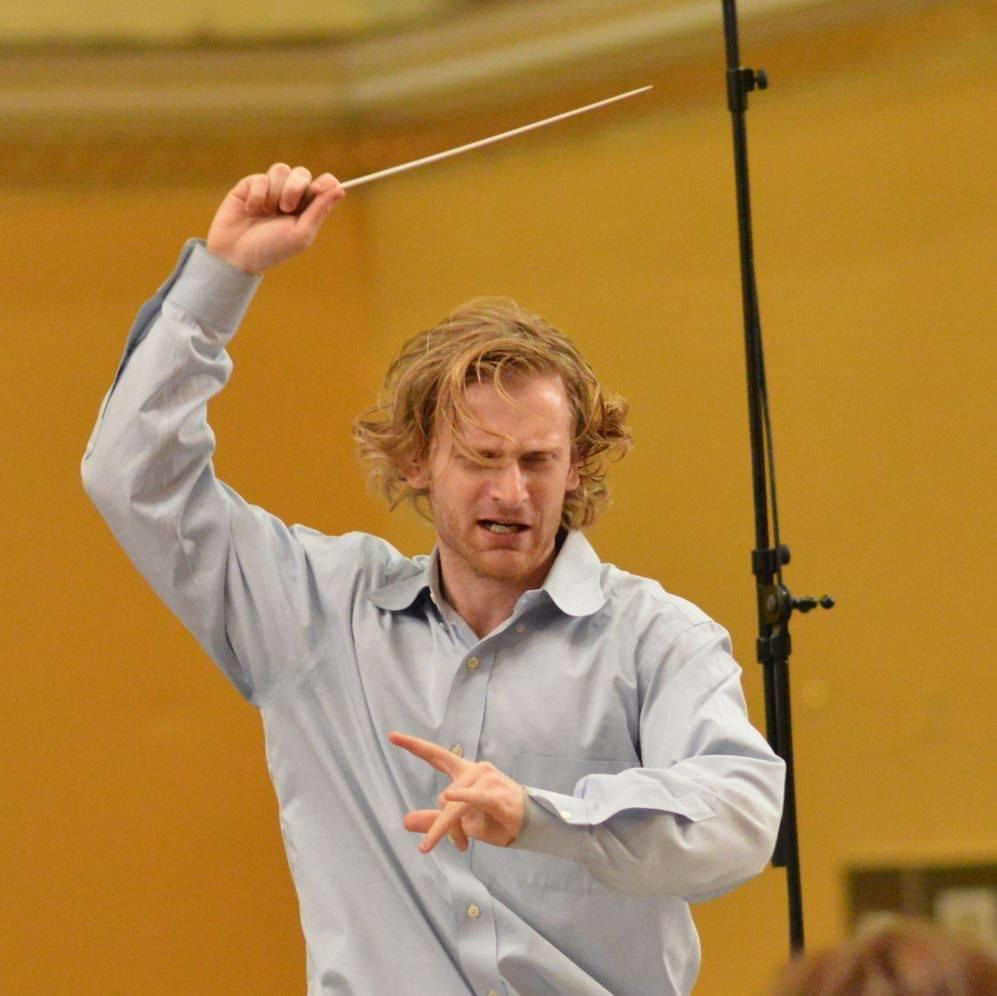 David Galant at the Dohnanyi Academy in Budapest, Hungary, conducting Antonín Dvořák Symphony No. 8 in July on 2016. 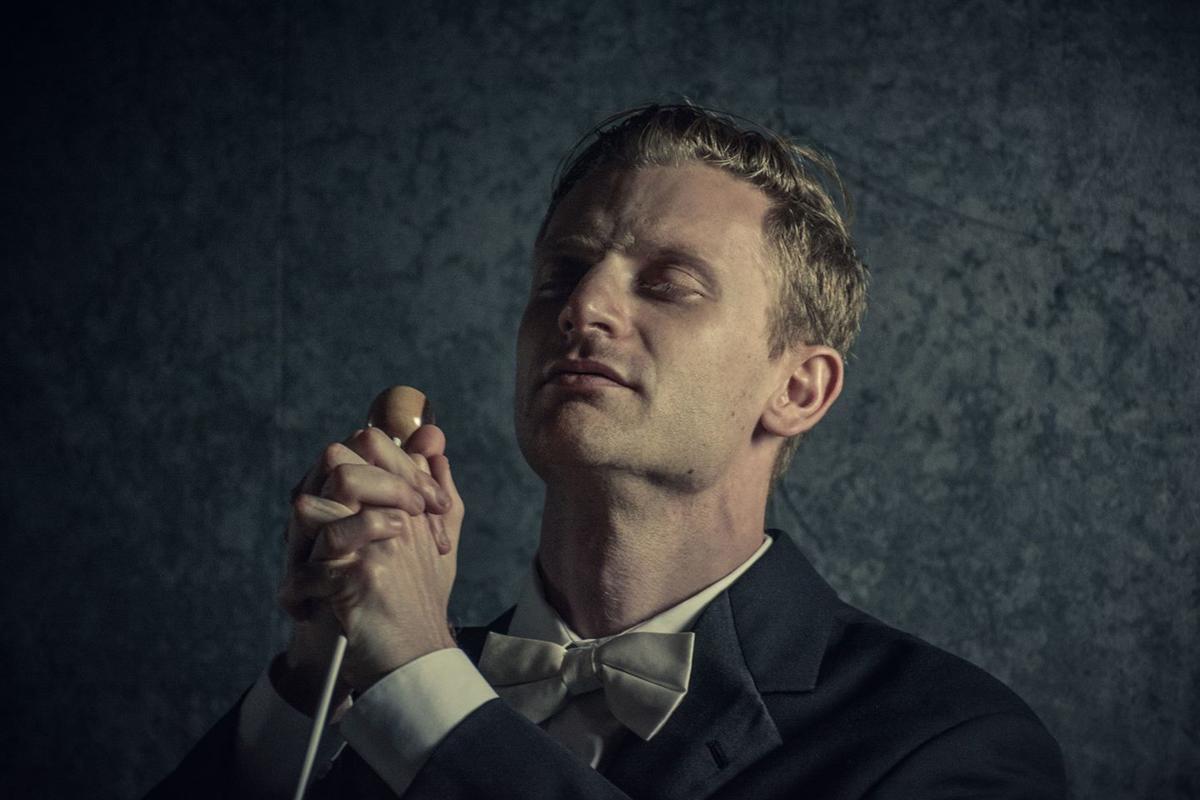 A visual depiction of contemplative prayer with David Galant as a means of expressive conducting.

As conductors, David Galant and Alex Lunardi continue to make sure the Kanesville Symphony Orchestra remains in tip top shape for their upcoming performances.

The orchestra was founded in 2014 and is an all-ages, community volunteer non-profit organization of musicians from the Council Bluffs-Omaha area.

Galant, who is originally from California, said he knew he wanted to obtain a masters degree in orchestra conducting.

“Music has always been an irrepressibly divine and spiritual experience for me,” said Galant. “It resonates throughout my body as if a religion and speaks to me passionately with no filter.”

Galant received a scholarship to come to the University of Nebraska-Lincoln, and while there, he conducted the Nebraska Christian Men’s Chorus.

“I also conducted the UNL Campus Orchestra, music theater productions and operas,” he said. When he graduated with his masters he traveled to Europe to conduct in Hungary, Chez Republic and Bulgaria.

“When I came back, I was asked to do a doctorate in music,” said Galant. “During that time, I learned about the symphony when they were created. I was their first conductor.”

When Galant arrived, to conduct they were a very small group and at the time they didn’t have the capacity to perform orchestra works. He left the orchestra, but three years later, they contacted Galant to come back and conduct.

Lunardi obtained his bachelor’s degree in piano performance at Creighton University in Omaha, and then his master’s degree in conducting at University of Nebraska at Omaha. Lunardi joined the Kanesville Symphony Orchestra about three years ago during their March St. Patrick’s Day concert. At the time they had about 15 members, and have gained 15 more over the years.

“Christine McCollum reached out to my conducting professor, and was looking for someone with conducting experience,” said Lunardi.

Galant was a conductor for the St. Louis opera and conducted at the Miami Music Festival. He has also been a guest conductor for symphonies all over the country.

“I was offered a job at Creighton University, where I conduct the orchestra and teach the chamber music ensemble and music history and appreciation,” said Galant.

The Creighton orchestra has combined with the Kanesville Orchestra for some performances.

“One of my favorite memories is when we performed for the opening gala at the PACE center,” Lunardi said. “Our opening performance was the march from the movie ‘1941’ by John Williams.”

When they are not conducting for the Kanesville Orchestra, they are still involved in music.

During the summers, Galant conducts the Muddy River Opera Company in Illinois, where he also spends a lot of time analyzing music, playing piano, violin or guitar. He was accepted and invited to do a Zoom meeting with Benjamin Zander, founder and conductor of the Boston Philharmonic.

Lunardi will play the clarinet, and has been learning to play the cello. He has played the trombone as well.

“I pride myself on being a jack of all trades,” said Lunardi. “I am well-rounded with the community ensemble.”

Kanesville is a group of “great people from all different backgrounds,” said Galant. Some are students, lawyers, people who have retired, and more.

“We are a group of musicians but we are also a family,” said Lunardi. “It’s difficult to gather with COVID-19, but the culture of the group is great and we’re not only colleagues but friends.”

Right now rehearsals are being held over Zoom due to COVID-19. They discuss composers and rehearse in sections with each family of instruments.

Kanesville’s next concert will be a John Williams tribute featuring music from “E.T.,” “Harry Potter,” “Jurassic Park” and “Star Wars.”

Film Review: 'Eurovision Song Contest: The Story of Fire Saga' good for a distraction from pandemic

In a time where the movie industry is at a standstill when it comes to original content, streaming services like Netflix are coming to the rescue.

LOS ANGELES (AP) — Authorities said Thursday that they believe “Glee” star Naya Rivera drowned in a Southern California lake but they are continuing the search for her a day after her 4-year-old son was found alone in a rented boat.

LONDON (AP) — Johnny Depp said in a London court on Friday that he was left embittered by ex-wife Amber Heard's claims he abused her, which turned him from “Cinderella to Quasimodo” in the public eye.

LONDON (AP) — Johnny Depp said Thursday that his relationship with Amber Heard was “a crime scene waiting to happen,” but denied assaulting her during a drug-fueled rampage in Australia while he was filming a “Pirates of the Caribbean” movie.

Movies in a Minute: 'Greyhound'

David Galant, left, and Alex Lunardi, right, before the opening night concert at the Hoff Family Arts and Culture Center.

Alex Lunardi conducting the first rehersal in the new Hoff Family Arts and Culture Center in January of this year.

David Galant at the Dohnanyi Academy in Budapest, Hungary, conducting Antonín Dvořák Symphony No. 8 in July on 2016.

A visual depiction of contemplative prayer with David Galant as a means of expressive conducting.