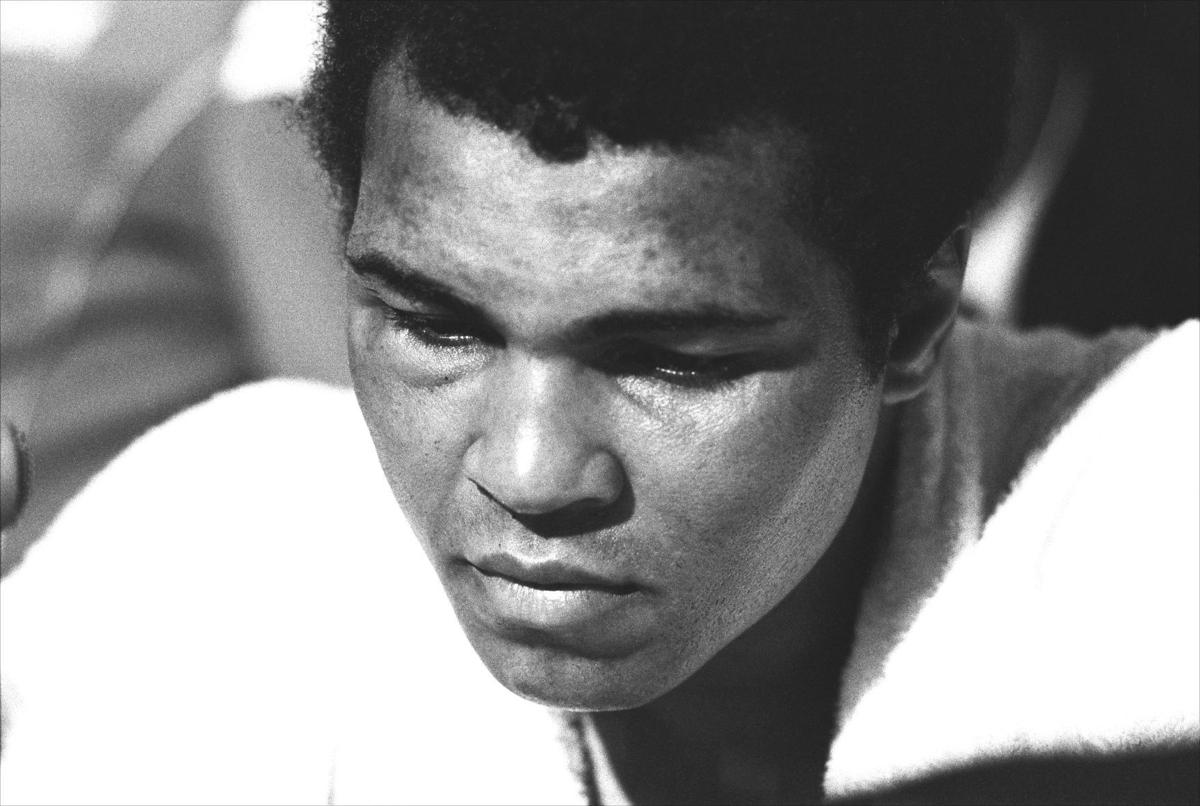 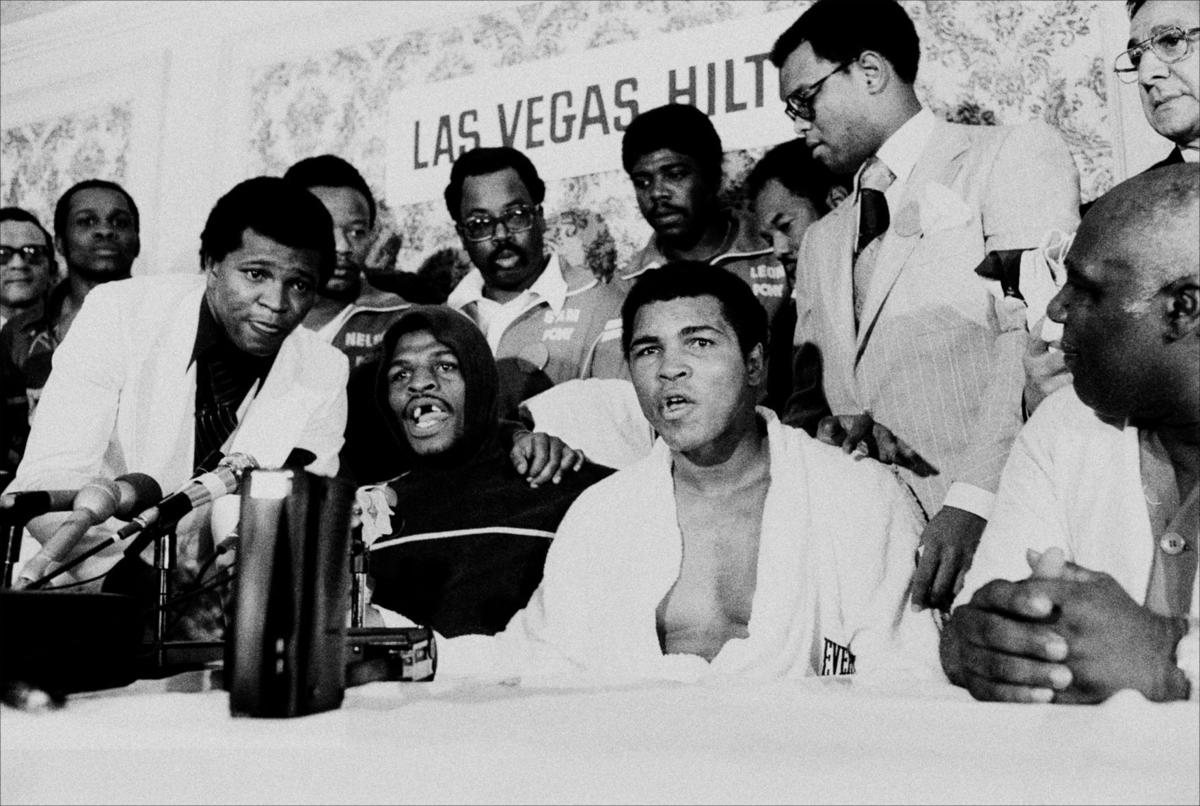 Muhammad Ali was also comfortable speaking to the media no matter what the situation — before or after a fight or in a social setting. 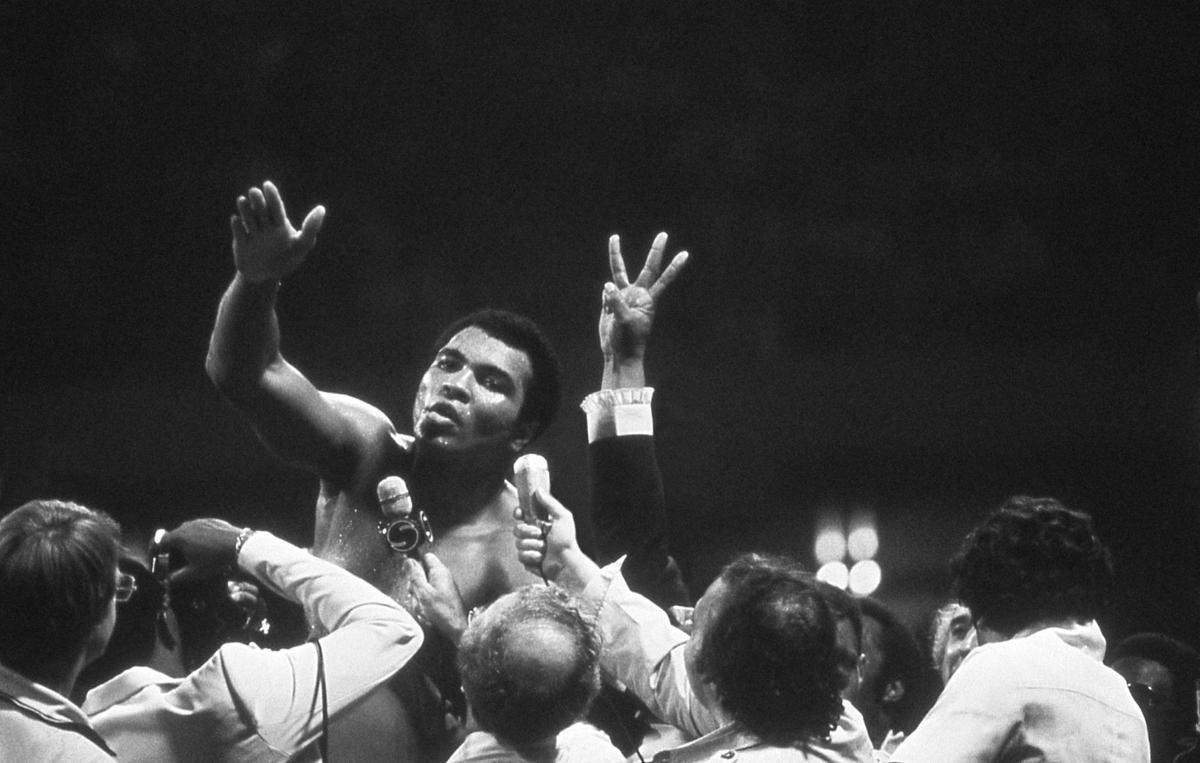 A confident Muhammad Ali was always on display when he was put in the spotlight. He’s featured in a Ken Burns documentary, “Muhammad Ali.” 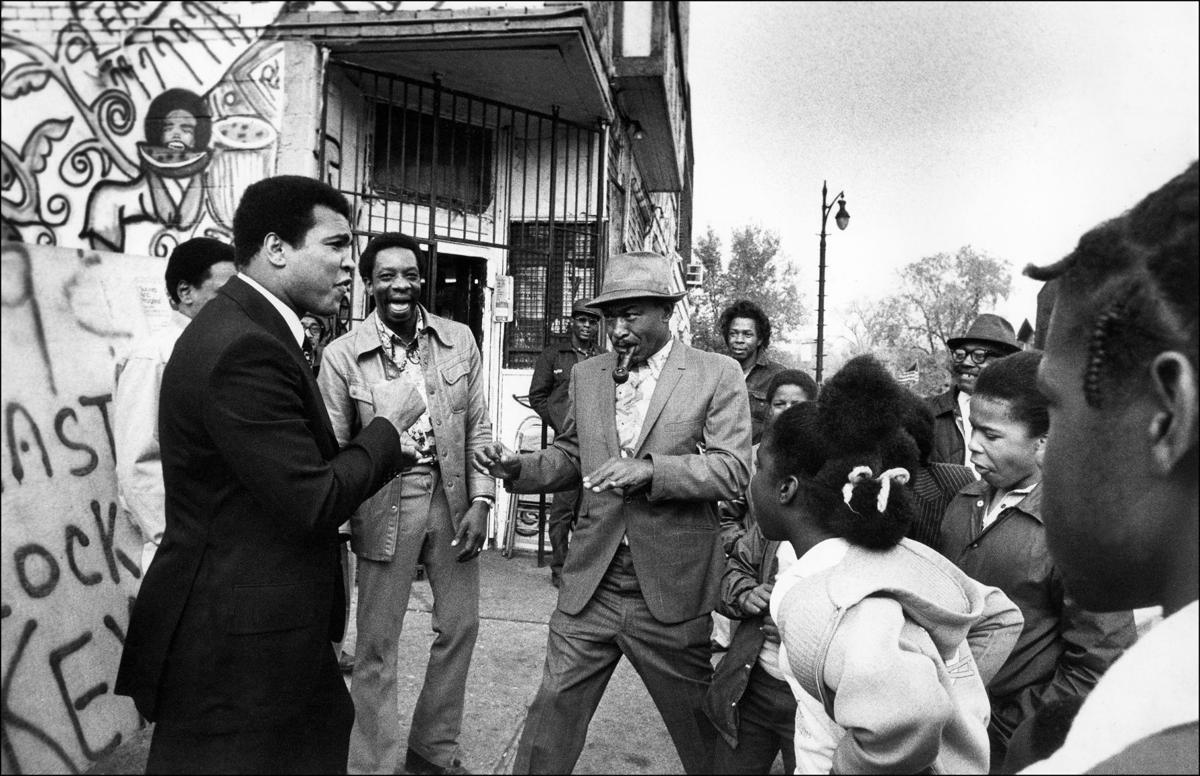 Thanks to his work with Malcolm X, Muhammad Ali was one who liked to mix it up with folks around the world. He’s featured in the Ken Burns documentary, “Muhammad Ali.” 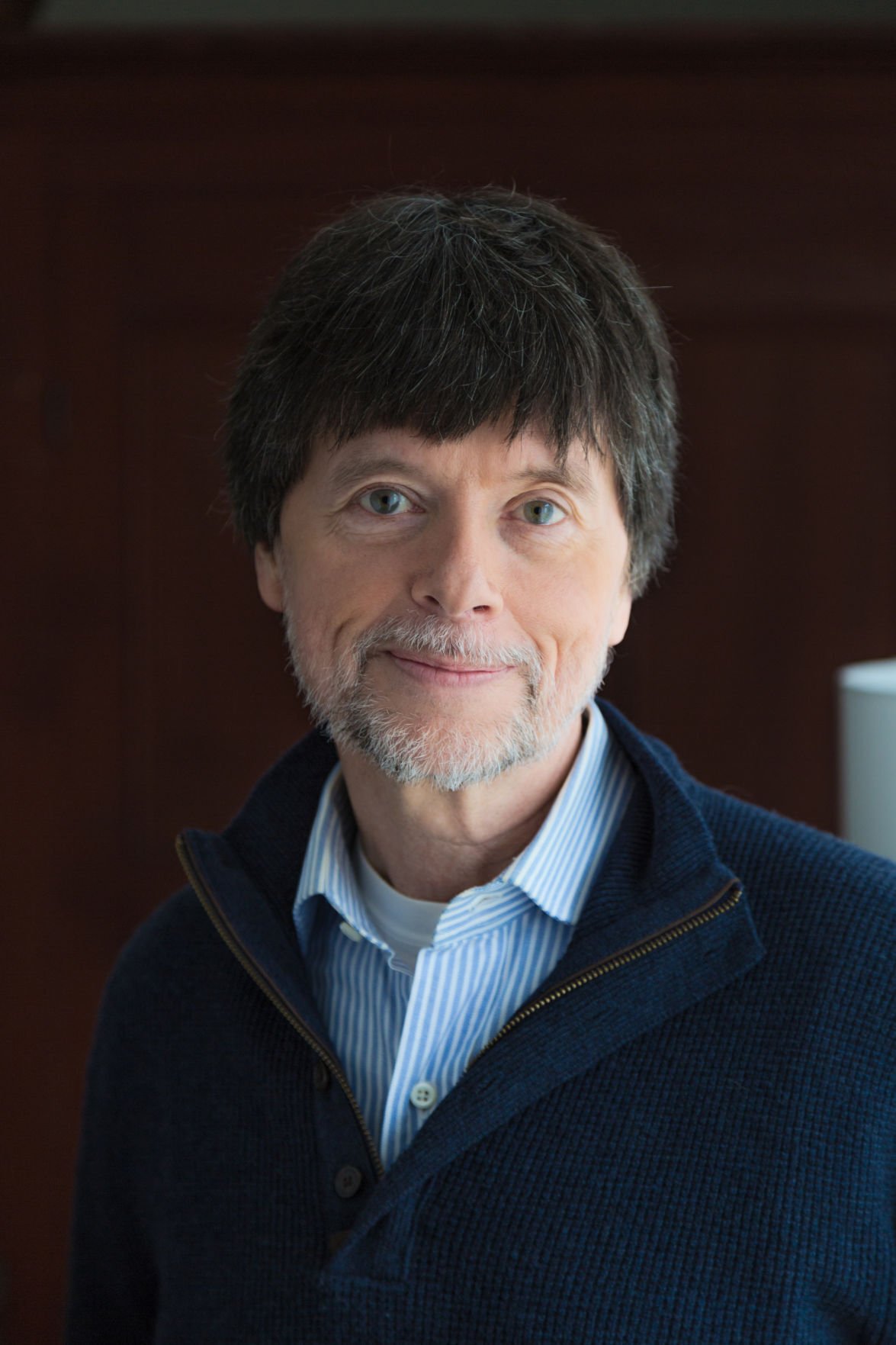 In the boxing ring, Muhammad Ali may have been a driven competitor, determined to win no matter what. At home, however, he was “sweet and cuddly,” according to daughter Rasheda Ali.

“I think a lot of that had to do with my grandmother, Momma Bird, who is the greatest person you want to meet. There wasn’t a mean bone in her body. You can’t take that sweet man out of the boxer.”

In the Ken Burns documentary, “Muhammad Ali,” viewers get to see another side to the man who could “float like a butterfly and sting like a bee.” “Daddy was a gentle giant, for sure,” Ali says. “He loved for us to play games with him and read the Qur’an to him. And he did shed a tear at home when we would read something that really resonated with him.”

Still, the boxer formerly known as Cassius Clay had a side that tested his reputation as “the greatest.” He refused to be drafted into the Army and was stripped of his title. He couldn’t box for more than three years, was found guilty of dodging the draft and became the subject of a Supreme Court case that said an appeal board did not give a reason for denying him conscientious objector status. The attention gave him an identity beyond sports.

Closer to home, family members were rocked by his infidelities, marriages and out of wedlock children.

“There were a lot of people around my father that weren’t good for him,” Rasheda Ali says. “Daddy was a good-spirited person but he made mistakes and he always owned up to them. Naturally, we were more forgiving and we kind of understood the circumstances that my dad was under were unique in nature.”

In the limited PBS series, Burns shows the boxer through the ups and downs of his life and career.

Michael Bentt, a former heavyweight champion, says Ali was surrounded by people “who live off other people. They kept him boxing because they wanted to make money off him.”

Rasheda Ali says her father probably would have boxed long after he did if he hadn’t been diagnosed with Parkinson’s. “He loved it so much. My dad couldn’t say goodbye to boxing. Boxing had to say goodbye to him.”

Like Bentt, she believes his supporters wanted him to continue “because he was basically their ATM.”

Because he started at such an early age (he was boxing at 12), Ali had the ability to play with the sport’s conventions. “What Muhammad Ali did in the ring you can’t teach,” Bentt says. “You are not taught to drop your hands and lean back. He crafted his own style.”

Ali also used lessons he learned from his friendship with Malcolm X, Bentt adds. “He expressed that in a physical way.”

Burns says Ali had a confidence that served him in and out of the ring. “He (was) always aware that he (was) guided by something bigger than himself. And that permitted him a kind of exhalation of the norms.”

Even though he was in a very masculine sport, Ali was able to spar with gender. “He really epitomizes a new thing,” Burns says. “Part of that is the audaciousness of being himself: ‘I have 182 amateur fights. I have 22 professional fights and I am pretty as a girl.’”

Rasheda Ali says it wasn’t always easy being his daughter because many were looking at every move she made. “I can’t make a mistake because I was not just Rasheda. I am Rasheda, Muhammad Ali’s daughter, who made the mistake. As I got older, I started to embrace the pressure but it wasn’t an easy thing to do.”

Now, as she sees his life in context, she understands how he was able to accomplish what he did.

Burns says he was one five men (the others: The Beatles) who understood the secret ingredient of the last half of the 20th century. “It’s the four-letter word that the FCC permits us to use but none of us knows how to use it very well or talk about,” Burns says. “And that’s love.”

What can you say about the Apple TV+ series, “Physical”? Created by Annie Weisman, it centers on a bulimic housewife, Sheila Rubin (Rose Byrne…

TV like this doesn’t come along very often, so watch it while you can.

When Michael Keaton read the script for “Dopesick,” a new Hulu series about the opioid crisis, the words just jumped off the page.

A field of 13 pros and self-taught bakers compete in challenges for the coveted golden rolling pin and cash prize.

Worth Watching: Kate Walsh Returns to ‘Grey’s,’ Back on the Runway, A ‘Kids Tonight Show,’ ‘B Positive’ Reinvents Itself

The pioneering fashion-design competition "Project Runway" launches its 19th season at Lincoln Center. Kids put on their own version of "The Tonight Show" in a new Peacock series.

FX debuted a new apocalyptic/drama TV series, “Y: The Last Man,” and if you have HULU, you can watch the first five episodes with new ones dro…

'Squid Game' is Netflix's 'biggest ever' series launch. Here's why.

The dystopian series, in which contestants who are deeply in need of money play deadly children's games to win cash prizes, has been viewed by 111 million accounts.

The killer is revealed in the uproarious season finale of Hulu’s hit comedy-mystery "Only Murders in the Building." ABC premieres the raucous hip-hop soap "Queens" about a reunited ’90s group.

Worth Watching: ‘Dopesick’ on Hulu, Harry Ambrose Back in ‘Sinner,’ a ‘Wonder’-filled ABC Lineup, Disney+ Goes ‘Beyond’

Hulu’s powerful limited-series docudrama "Dopesick" is a devastating look at how OxyContin was falsely marketed as a non-addictive pain treatment, fueling the opioid crisis.

Muhammad Ali was also comfortable speaking to the media no matter what the situation — before or after a fight or in a social setting.

A confident Muhammad Ali was always on display when he was put in the spotlight. He’s featured in a Ken Burns documentary, “Muhammad Ali.”

Thanks to his work with Malcolm X, Muhammad Ali was one who liked to mix it up with folks around the world. He’s featured in the Ken Burns documentary, “Muhammad Ali.”