Editor's note: CNN previously reported an obituary on Tony Dow, after receiving a statement from his management team confirming his death. That statement has since been rescinded and a family friend has confirmed to CNN that Dow is in hospice care.

After sharing a statement on his verified Facebook account Tuesday morning that Tony Dow, an actor and director best known for his role as older brother Wally Cleaver on "Leave It to Beaver," had died, Dow's management team has removed the statement.

According to Judy Twersky, a longtime friend of Dow's, he was still alive as of 3:30 p.m. ET, when she spoke to Dow's wife, Lauren Dow.

Lauren Dow told Twersky he is still breathing and receiving hospice care. Dow was unclear what happened with the statement from her husband's management team earlier today, Twersky told CNN.

Dow was thrust into stardom at age 12, when he was cast on the soon-to-be-smash sitcom "Leave It to Beaver." In the role, Dow helped create the archetype of a suburban nuclear family and became a household name to millions of viewers. The show ran from 1957 to 1963.

In a January interview with CBS Sunday Morning, Dow recalled learning over a hamburger and malt that he was offered the part after auditioning on a whim.

"There went my life," he said.

Wally Cleaver, the straight-arrow teenage son, star athlete and Boy Scout, became inextricably tied to Dow, who said he struggled to stand on his own.

"It's sad to be famous at 12 years old or something, and then you grow up and become a real person, and nothing's happened for you," he told CBS.

Dow, who said he experienced undiagnosed depression from age 20 to age 40, spoke out for decades about his mental health challenges, long before it was common for celebrities to disclose that information publicly. In 1993, he was an honorary speaker at a convention for the National Depressive and Manic-Depressive Association.

"I realize there's a perceived irony about this," he told the Baltimore Sun of his depression in 1993. "You know, the fact that I was in a TV program that epitomized the supposed ideal world of the '50s, and here I'm suffering from depression. But I'm just one of millions."

Dow told CBS that once he accepted his diagnosis and began treatment, he found hope. He channeled that hope into art, too, sculpting ornate pieces at his home studio.

"I think people should take the leap of faith that they can feel better," he said.

Dow continued to work in Hollywood, taking parts in TV series and even reprising his role in "The New Leave It to Beaver" in the 1980s. He also directed episodes of series like "Harry and the Hendersons," "Coach" and "Star Trek: Deep Space Nine."

Jerry Mathers, who starred opposite Dow as Beaver on their hit sitcom, told fans earlier this month that he'd been in contact with Dow, whose managers said had been "in and out of the hospital with various complications and treatments."

Tony Dow, who played Wally Cleaver on ‘Leave It to Beaver’, still alive despite earlier report of death

Dow’s representatives announced on his Facebook page that he had died, causing news outlets worldwide, including the Daily News, to report his death.

Jack Black used to think he was a bad actor

Lewis Hamilton turned down a role in 'Top Gun: Maverick'

Lewis Hamilton turned down a role in 'Top Gun: Maverick'

In this Thursday, Sept. 18, 2012 photo, Tony Dow, actor, director and artist, poses at his home and studio in the Topanga area of Los Angeles. 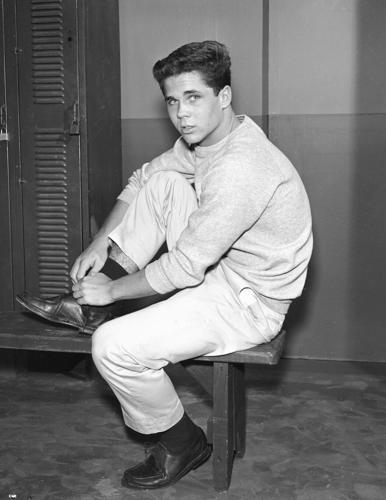 Tony Dow, an actor and director best known for his role as "The Beaver's" older brother Wally Cleaver on "Leave It to Beaver."

Members of the original cast of the "Leave It To Beaver" television series pause during filming of an upcoming TV special, "Still The Beaver," in Los Angeles on Dec. 10, 1982. From left to right are Ken Osmond, Tony Dow, Babara Billingsley and Jerry Mathers.

The cast of Leave It To Beaver poses for a photo as they are reunited in Santa Monica, Calif. Thursday, Sept. 27, 2007, to celebrate the 50th anniversary of the show. The cast was shooting a segment for Good Morning America. Seated (L to R): Jerry Mathers, Barbara Billingsley, Tony Dow and his wife Lauren Shulkind. Standing (L to R): Frank Bank and Ken Osmond.