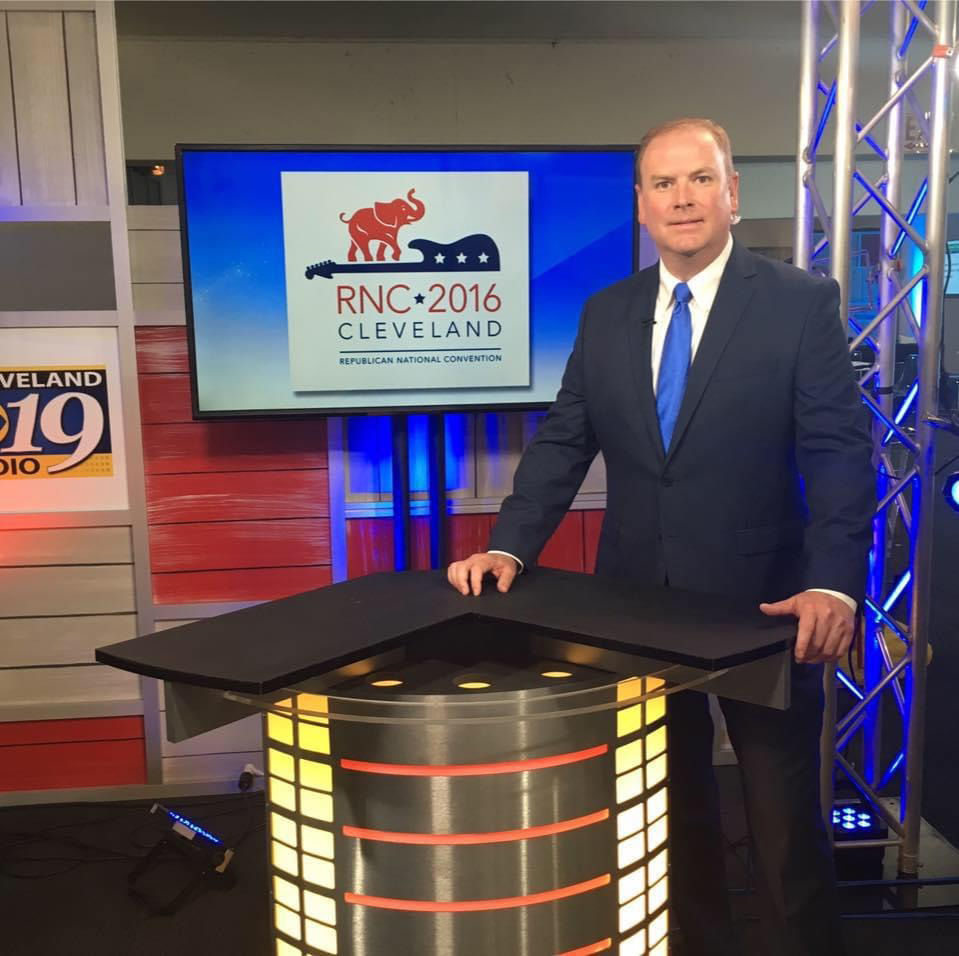 Dan DeRoos covering the Republican National Convention in 2016 for the Cleveland 19 News. 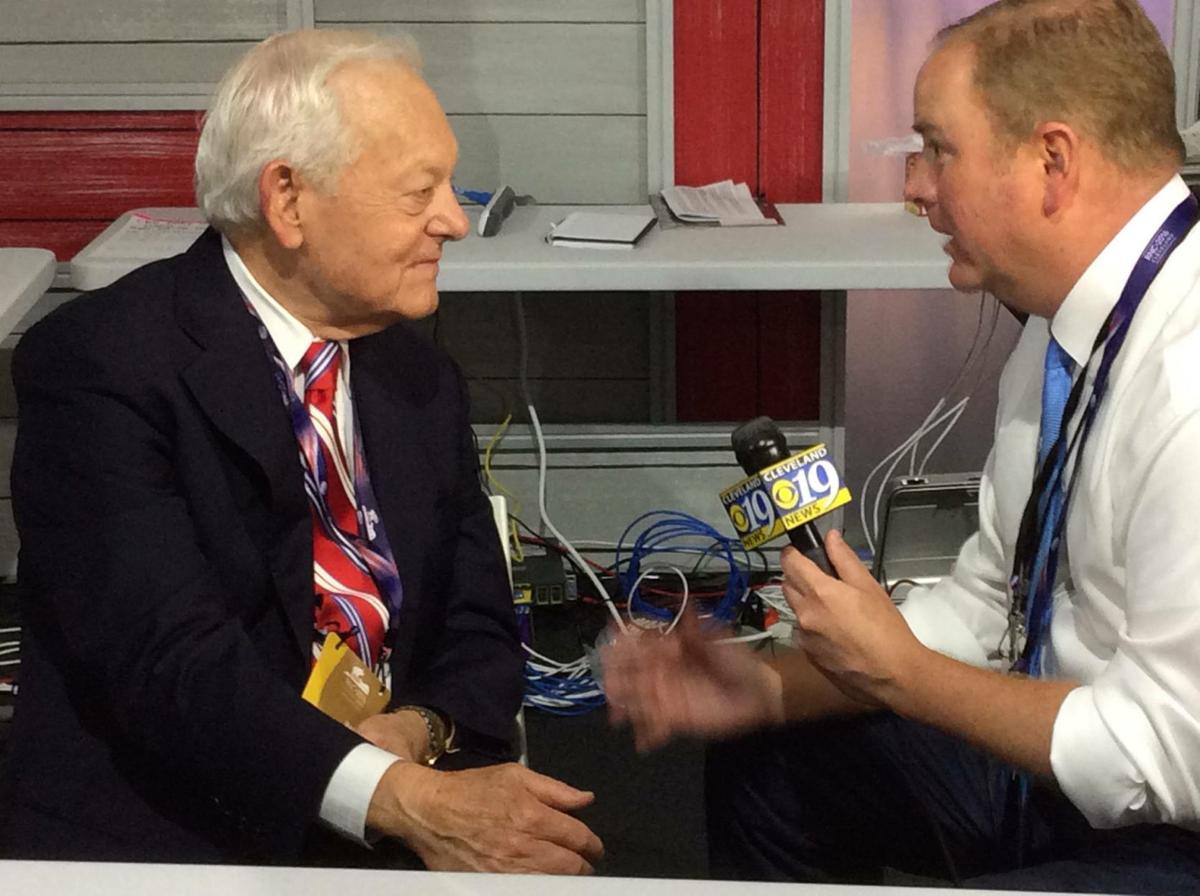 Dan DeRoos, at right, interviewing Bob Schieffer in the Republican National Convention in 2016.

In the midst of Michelle Knight, Amanda Berry and Georgina DeJesus’ escape from Ariel Castro’s Cleveland home, a 1994 Abraham Lincoln graduate had his microphone on as a live coverage reporter for the KVWBS news station.

Dan DeRoos, whose passion for journalism started within the walls of the Council Bluffs high school, was among Cleveland reporters dedicated to sharing the truth of the women’s captivity and captor, enveloping a “Cleveland factor” to the breaking news which he covers.

In high school, DeRoos was the host of the AL Insider, but wasn’t sure of his future until a meeting at the dinner table with his family.

“My brother was an engineering student at the time, he said, ‘What about journalism?’ I looked at him strange. It was the first time it occurred to me that I could turn what I did at A.L. into a profession.”

From there, DeRoos’ passion went onward — he studied journalism at the University of Iowa and landed his first job as a reporter for KWWL in Cedar Rapids.

“I knew that I wanted to go to college and spread my wings a bit,”’ DeRoos said. “Once you graduate with a journalism degree, it would have been tough to run back to Omaha and start in that market.”

After five years in Cedar Rapids, DeRoos spread his wings to Portland, Oregon, but that lasted only three years. His boss became the news director for Cleveland 19 News and asked DeRoos to come with.

“Once I got to Cleveland and became a journalist, I absolutely fell in love with the city and aside from Iowa, it’s now my new home,” he said.

DeRoos’ career in Cleveland has been award-winning — and for some of those most chilling stories.

Castro kidnapped and held captive three women for more than nine years, until the women escaped in 2013.

DeRoos was also the first reporter on scene at notorious serial killer Anthony Sowell’s home, where police found 11 women who were murdered in the home.

“From the first night we were there, we could tell the police were clearly disturbed by what they could see and how the bodies looked,” DeRoos said.

“Every city has shootings and murders, but there’s always a Cleveland factor that sends these crimes over the top, and it’s one of the things that kept being a journalist here interesting.”

DeRoos now serves on the Amber Alert committee alongside DeJesus, one of the three Castro survivors.

“It’s a tremendous that they’ve not only survived, they’ve now thrived. Those girls, the hell they went through, I don’t know if anyone can imagine,” DeRoos said.

Reporting on Cleveland’s COVID-19 pandemic, DeRoos said Cleveland’s mayor shut down the city earlier to prevent the spread of the disease to elderly populations.

As of June 16, Ohio’s deaths are listed at 2,508, according to the Ohio Department of Health, which is comparably low nationwide considering Ohio’s population of more than 11 million people.

“Everyday there was another restriction, closure, another part of life that you couldn’t do anymore. People adhered to the restrictions, but after a month or two worth of numbers came out, you started to get the question of why things were closed,” he said.

“For the people who have died in Ohio, those families are devastated and it’s tough to see,” he said.

Amid the COVID-19 pandemic, the death of Minneapolis’ George Floyd — who died under the knee of police officer Derek Chauvin on May 25 — has stirred nationwide protests against police brutality.

And like reopening a wound, Cleveland is still grieving the 2014 fatal shooting of Tamir Rice, a 12-year-old Black boy who was playing with a toy gun when a Cleveland police officer “made a snap decision in a second that he was reaching for his waistband,” DeRoos said.

At the time of Rice’s death, DeRoos said there were demonstrations and protests that were all peaceful, but that was not the case this time around.

“When protestors tried to vandalize the Cleveland Justice Center, they were met with tear gas, flash bags and riot police,” he said. “It pushed into our business area downtown, that’s when the violence, looting and damage began. It completely ripped downtown Cleveland apart.”

DeRoos was one of the few people allowed inside downtown Cleveland’s barrier amid citywide curfews, but had to go through checkpoints with the National Guard to get downtown.

“It was even more bizarre than the COVID-19 restrictions in place. A few essential workers, but (during the mandated curfews) there was no one,” he said.

“2020 has been unlike anything I’ve seen and we’ve still got the election to come, so who knows,” DeRoos said.

In the totality of his career, DeRoos has also been met with emotional stories that have made him forget that he was a journalist. In Cedar Rapids, a mother had lost her daughter to meningitis and she wanted other parents to know how quickly it moves through the body. Within an hour, a red spot on her daughter’s leg spread and inflicted immense pain.

In DeRoos’ interview with the mother, she revealed the moments leading up to her daughters death, and some of her last words.

“The daughter said, ‘Mama, I don’t want to hurt anymore,” and her mother said, ‘If you want to go, you can go,’ DeRoos said.

“You are listening to this mother give her daughter permission to die, and she died. I absolutely cried, that was one of the moments I forgot I was a journalist, I sat and listened,” DeRoos said.

Midlands Humane Society announced Monday it will participate in the two-day Empty the Shelters event, sponsored by the BISSELL Pet Foundation.

They scooped up the mud from the bottom of Lake Manawa, one plastic cup at a time.

It wasn’t just a wedding ring lost at the bottom of the lake. It had originally belonged to Steven’s father who has been battling stage 4 cholangiocarcinoma for months.

COUNCIL BLUFFS — Morris Sandoval, still weak and bearing the tracheostomy tube placed to help him breathe, was wheeled out of Jennie Edmundson…

Past and present, gardening increases in Council Bluffs

There’s been a dramatic increase in gardening during the past few months. It’s happened across the nation, throughout Iowa and locally in Coun…

Midlands Humane Society: Is adopting a senior pet right for you and your family?

So, you’re ready to bring a new pet into your home. You drive to your local animal shelter and get drawn in by the cute-as-a-button kitten jum…

Dodge Connection: The tick of a clock, the beat of a heart

A delicate, gold-trimmed clock with the Greek god of the sun painted on the clock’s glass base, draws the eyes of every visitor who ventures i…

Fourth of July: A look at police, fire calls with safety tips for humans, pets

The booms, cracks and sizzles of fireworks have filled the air in Council Bluffs for a few weeks now. But Thursday marked the first day firewo…

Pelosi: Trump's been a failure in every way from the start

Dan DeRoos covering the Republican National Convention in 2016 for the Cleveland 19 News.

Dan DeRoos, at right, interviewing Bob Schieffer in the Republican National Convention in 2016.