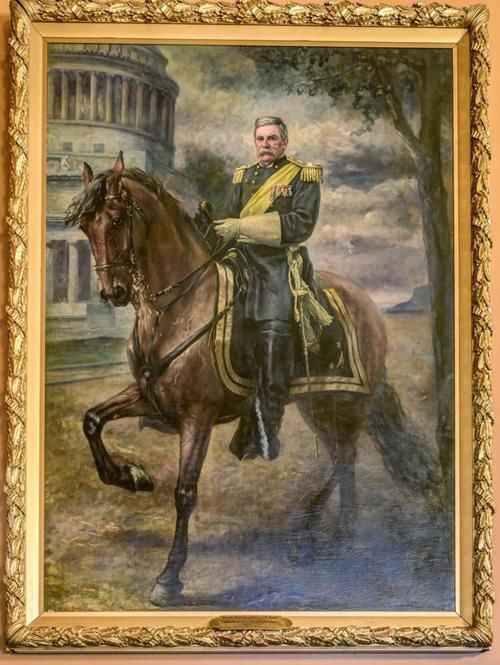 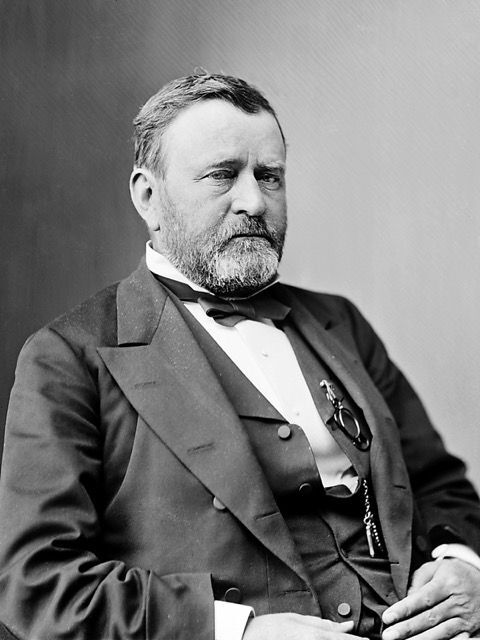 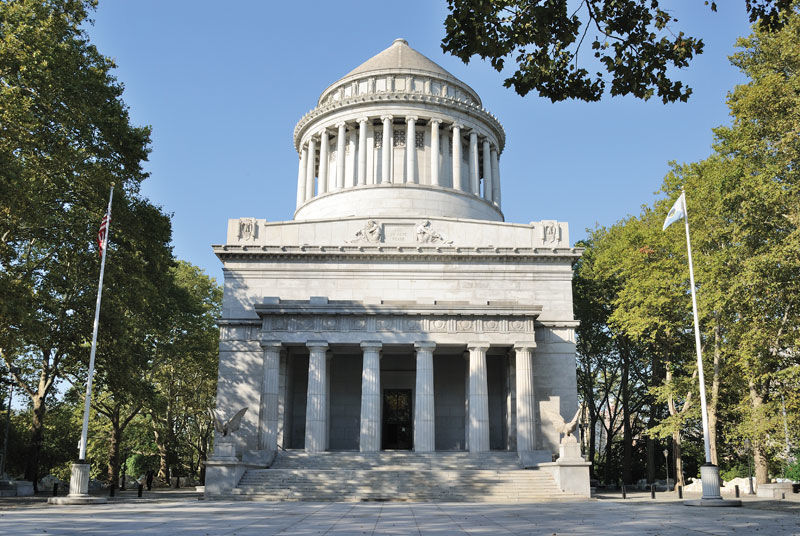 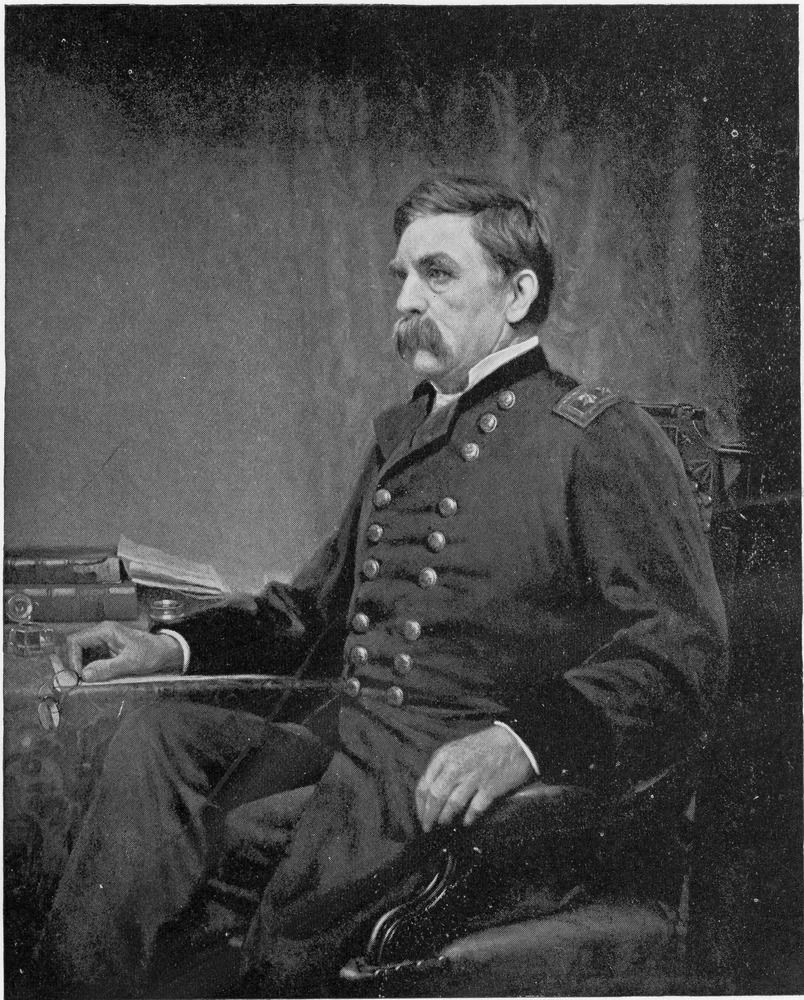 A painting of General Grenville Dodge.

The year is 1834, and a 3-year-old child sells meat with his father near Salem, Massachusetts. The toddler drives the family wagon as his father follows behind with the cattle. The boy’s mother frets mightily, fearing her first-born son will be injured — or worse.

A few years later, now considered a young adult at just 13-years-old, he performs backbreaking labor on a neighbor’s farm.

Time passes. He works through college, almost getting expelled for fighting and rule breaking. In 1851, his first “real job” as a fully mature man of 20-years-old, takes him into the summer heat of Illinois as part of a rail laying crew.

Not long after, he is promoted to the marries, welcomes the first of three daughters into the world and makes Council Bluffs his home. Success follows and he constructs a custom mansion, high on the Bluffs, which still receives visitors to this day.

We can only imagine how much of his humble beginnings the man recalls as he strolls the streets of Paris, France in the summer of 1877. Beside him — the President of the United States.

General Grenville Dodge walks alongside General Ulysses S. Grant — two battle-tested warriors from the American Civil War. They admire the wide avenues of Paris, especially the Champs-Elysées. Both enjoy a cigar as they talk about their storied lives, their future and the future of a nation.

Grant had always treated Dodge — who was almost 10 years younger than him — as more than just a comrade-in-arms and friend. He was almost fatherly to him. Grant worked hard to ensure that Dodge was promoted again and again, even when Dodge had frustrated then-President Abraham Lincoln.

Grant, like Dodge, came from humble beginnings. Born in Ohio, Grant had a natural and exceptional ability with horses. This gift would serve him well throughout his life. While Dodge was only 16-years-old, Grant, then 26, and a West Point graduate, served with distinction in the Mexican-American war.

While the average American of the day lived a modest, plain and routine life, both Dodge and Grant traveled to and from, fought with distinction in the Civil War, engaged in business ventures, traveled the world and enjoyed the responsibilities and benefits of high office. They knew both success and failure, with Grant experiencing the latter more than Dodge.

A far better solider than a businessman, Grant’s post-presidential life was marked by debt and disappointment. Grant’s second son, Ulysses, also known as “Buck,” entered into a partnership with Ferdinand Ward. In truth, it was a Ponzi scheme.

Ward was the “Bernie Madoff” of his day and used the Grant name to attract more and more victims. When the firm failed, Buck talked his father into investing more funds to preserve the concern. Grant borrowed $150,000 from his friend William Henry Vanderbilt. Shortly thereafter, his son’s business failed again, Grant gave Vanderbilt title to his home and many personal possessions. Vanderbilt, generously, in time, forgave the debt.

Still, it was a financial wound from which Grant would never recover. General Dodge assisted as he could, sometimes financially.

One afternoon at lunch, the back of Grant’s throat began to burn with discomfort. It was the beginning of the end. Cancer.

Grant wrote to Dodge late in 1884, “I am sorry to trouble you, and would not but for the circumstances under which I am placed. Since my (cancer) of nearly a year ago, I have grown very weak. A sore throat of six months and standing has given me much trouble. I think a visit to the Hot Springs would do me much good. Can you furnish me a special care out and back?”

It was the last letter Grant would compose in his own hand.

Dodge sent his private rail car immediately. But it was a journey never taken. Grant died just a few months later ... too weak for a final trip.

Dodge was devastated by the loss of his friend and mentor. Dodge wrote to Grant’s son Fredrick, “No one can feel more keenly the great loss that Grant is to the people of this country than I do. For 23 years he has been so good, so kind a friend to me that it is hard to give him up.”

Dodge later wrote, “As the years pass by and his acts are measured by the results of his administration, it is being generally admitted that he was equally as great a statesman as he was a solider.”

Dodge became pensive. His own mortality now came to weigh on his mind. Grant had been struck down by cancer in the prime of his life and was not that much older Dodge. Dodge began to write. In total, he wrote over a half a dozen books and essays (still in print) and an autobiography yet to be published.

Yet, Grant’s death does not end the story of Dodge’s fidelity to the family. Soon after Grant passed, donations were progressively procured for a grand mausoleum/monument in New York City. Dodge was appointed vice president of the concern, with all the formalities and ceremonies placed under his charge.

The Grant monument/mausoleum was dedicated on April 27, 1897. As Grand Marshall of the event, which included over three million spectators along the sidewalks of New York, Dodge recalled, “President McKinley was to review the parade ... the most extensive ever made in New York, and I was over a month attending to the details and completing the arrangements.”

To this very day the event is memorialized. Proudly hanging in the Iowa state Capitol is a full-sized equestrian painting of General Dodge, in full military dress, gallantly mounted upon a steed before the edifice of Grant’s monument and tomb.

Dodge also made certain that Fredrick Grant became a general — a post he believed the young Grant worthy of. It was an intergenerational friendship.

Fredrick Grant wrote, “It was to General Dodge I confided my distress and grief in first learning that my dear father was stricken with a fatal illness. When I learned also of that other sorrow which came to our family in the passing away of my mother, I again, turned to General Dodge for sympathy and found him as always, ready to extend heartfelt friendship and condolence.”

In summation, Dodge wrote that Grant “was created for great emergencies. In ordinary matters he was an ordinary man; in momentous affairs he towered as a giant.”

The same could be said of Dodge.

Fredrick Grant reciprocated, writing to Dodge years later, “My happiest hours are those passed with you, General Dodge, and the other comrades of my father. This association, with my name, is my proudest heritage.”

— Thomas R. Emmett is the executive director of the Historic General Dodge House.

What is the Moon Festival? A scholar of Chinese religions explains

The Moon Festival, rooted in China’s long history and rich cultural traditions, is celebrated on Sept. 21 this year. In China, though, the festival is a three-day public holiday.

Underneath all the makeup, who was the real Tammy Faye?

The subject of a new biopic, Tammy Faye was a televangelist icon. But she also represented another side of the evangelical coin — one that was big-hearted, vulnerable and accepting.

One of the first steps the St. Francis Day Foundation, which Steve Menzies chairs, will undertake is providing vaccines and medical equipment to displaced populations. It also will teach people about the dangers of “digital addiction.”

A painting of General Grenville Dodge.