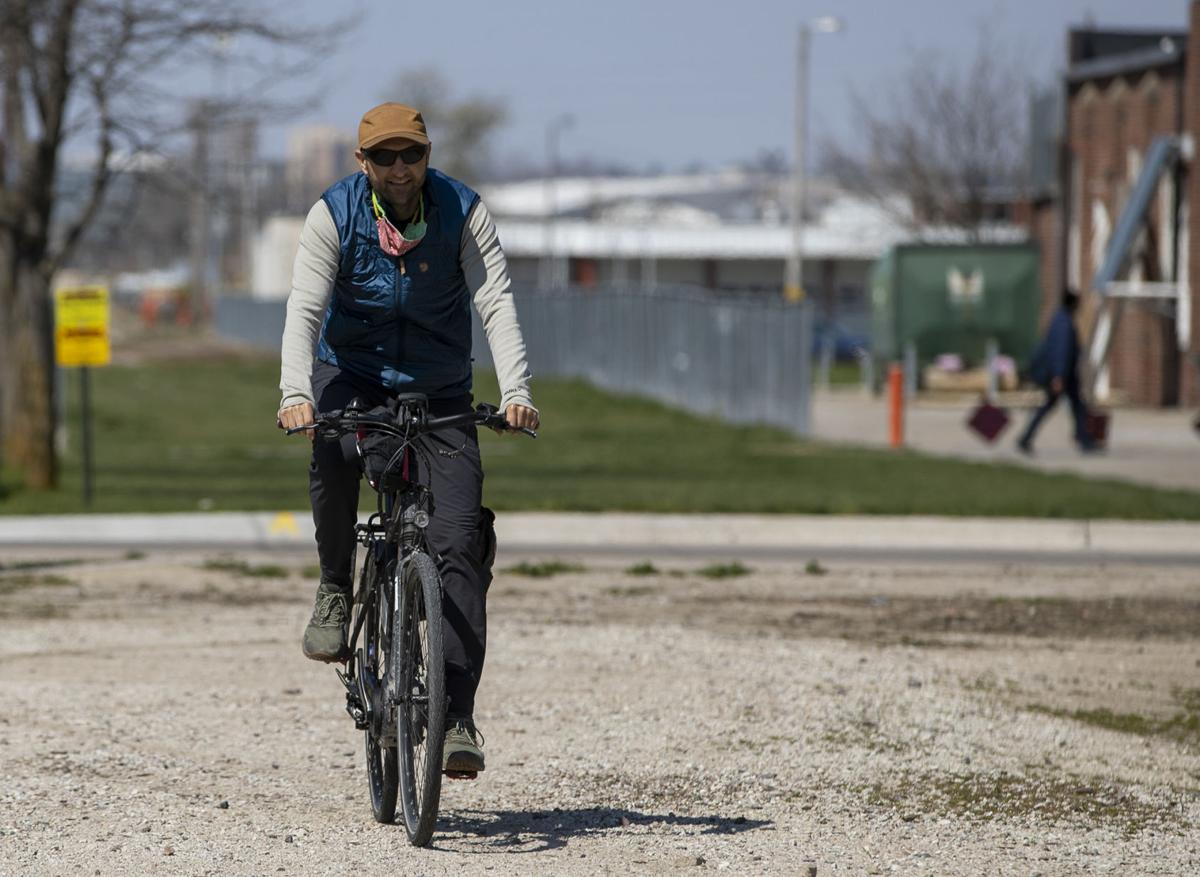 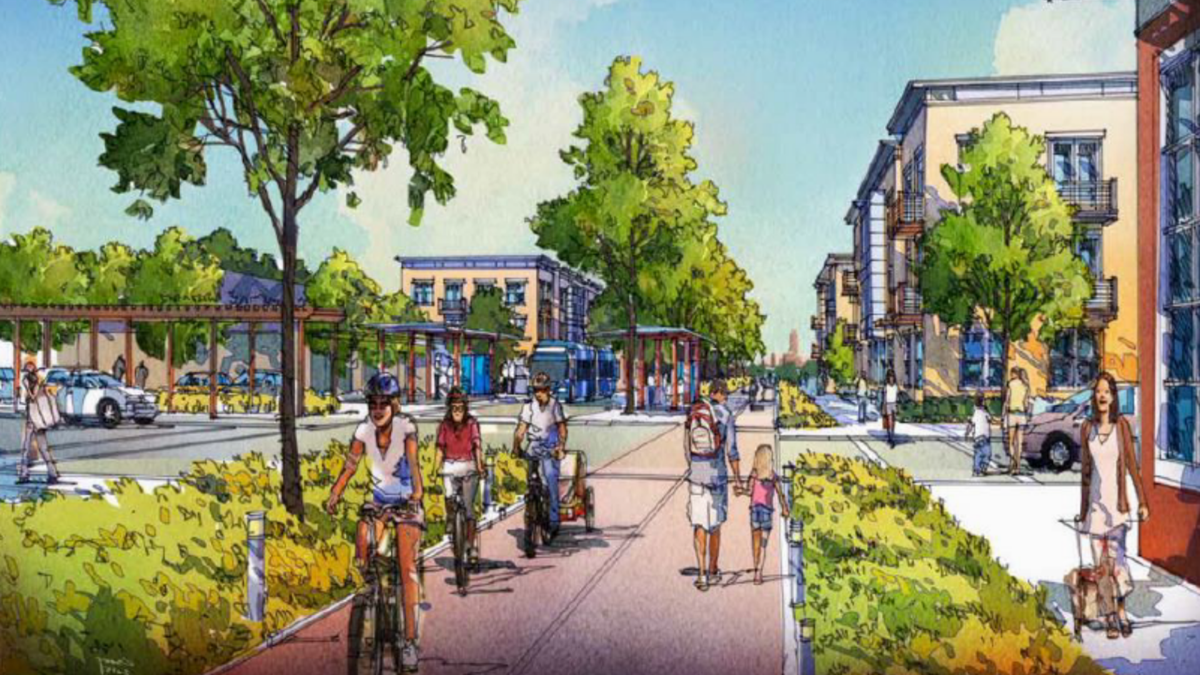 A rendering of the First Avenue trail. 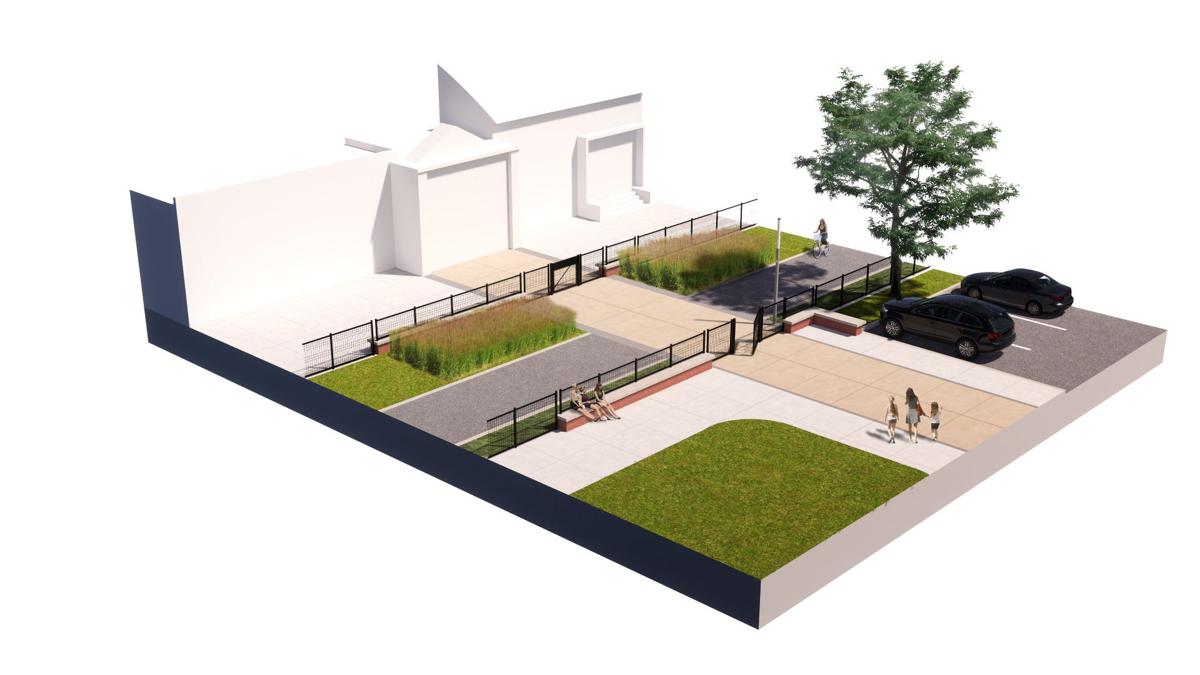 A rendering of the First Avenue trail’s path past Thomas Jefferson High School.

On a perfect day for a walk, run or bicycle ride, local stakeholders celebrated the beginning of construction on a new trail along the First Avenue corridor in Council Bluffs.

The first phase of construction will be the section of trail from 25th to 35th Street. When finished, the trail will run from 16th to 35th Street, about 1.8 miles, and will connect with other trails within Council Bluffs.

“There’s already a trail at 16th Street waiting for the end of this trail, and another end on 35th Street is waiting,” Brandon Garrett, director of community development, said at a groundbreaking ceremony Thursday morning south of Hy-Vee Gas on 25th Street. “So the trails are already there, and this trail is filling the gap.”

There will be seven plazas along the trail — one placed every three to four blocks — that will include resting benches and bike parking. One of the plaza’s will be placed to the south of Hy-Vee Gas.

The trail will cover ground where train tracks that were part of the Chicago and Northwestern Railroad used to lay. The tracks were removed in 2013.

“The city really wanted to make some improvements, and to mainly remove the inconvenience of having a railroad that paralleled the main thoroughfare,” said Brenda Mainwaring, president and CEO of the Iowa West Foundation.

The railroad corridor was placed so trains could access a grain elevator almost at the river. The grain elevator was later sold and removed, so then the tracks were reverted back to the city and the tracks could be removed. With the removal of the train tracks, it left an open avenue where a trail could be put, Council Bluffs Mayor Matt Walsh said.

“The trail will intersect with other trails that have historically been on the perimeter of the city,” he said. “Once (a city) gets developed, it’s very hard to put in a new trail system.”

Walsh also said there would be improvements made to Cochran Park, which is located along the trail.

City Councilman Chad Hannan said an underrated part of the trail is how the trail will impact the way kids are walking to school.

“Think about how kids walk to school, to T.J., they’re walking along the sidewalks on busy streets like West Broadway or Second Avenue,” Hannan said. “Now they have a safe path to school with no vehicle interaction, except for crossing the street.”

Phase 2 of construction will include the portion of the trail from 16th to 25th Street.

As of now, construction for Phase 1 is expected to finish in the fall, with Phase 2 construction beginning in the spring of 2022. Find more information at FirstAveCB.com.

Combat your fitness fears and start enjoying a sustainable workout

Combat your fitness fears and start enjoying a sustainable workout

Sign up here to get the latest health & fitness updates in your inbox every week!

To say that being a nurse is in Trish Jones’ blood is both accurate and an understatement. Her family’s nursing legacy extends to her mother, …

'Compassionate Care': For 45 years, Colburn has been there for her patients

Mary Jane Colburn has worked for Methodist Jennie Edmundson Hospital for 45 years, and throughout that time, she has made impacts both profess…

A native of Council Bluffs, Kyle Kreger has worked at Methodist Jennie Edmundson Hospital in Council Bluffs since receiving his bachelor of sc…

'Hidden halo': Raes reflects on the health care lessons of the COVID-19 pandemic

For more than 20 years, Kelly Raes’ “home” at Methodist Jennie Edmundson Hospital in Council Bluffs has been the hospital’s Intensive Care Unit.

'Leader by example': Goodman steps up to challenge presented by pandemic

You might guess that things were pretty intense in CHI Health Mercy Hospital’s Intensive Care Unit during the peak of the COVID-19 pandemic.

Sarah Townsend, a nurse supervisor in the CHI Health Mercy Hospital Emergency Department, is one of those employees who can adapt to unexpecte…

'Above and beyond': Kaestner balances personal and professional goals while helping patients

Dianna Getler, a registered nurse at Methodist Jennie Edmundson Hospital, is known for her encouragement and compassion with patients. Especia…

'Like family': Siegrist recognized for compassion to patients and their families

Like many professions, the best of those who have opted to become nurses possess a broad range of professional skills and personal attributes.…

'Heart of gold': Downing says her mission is to help elderly patients

Growing up, Joanna Downing wanted to be a marine biologist. She became a geriatric nurse instead. 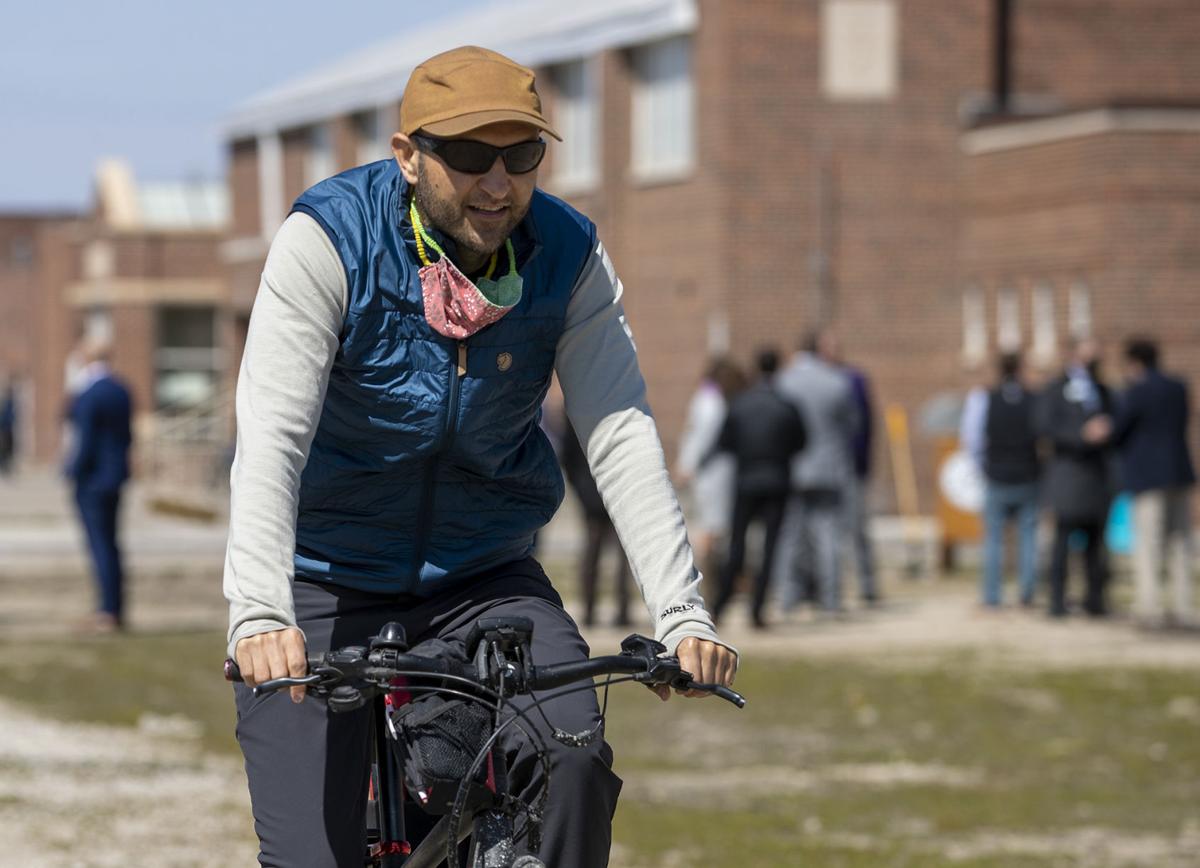 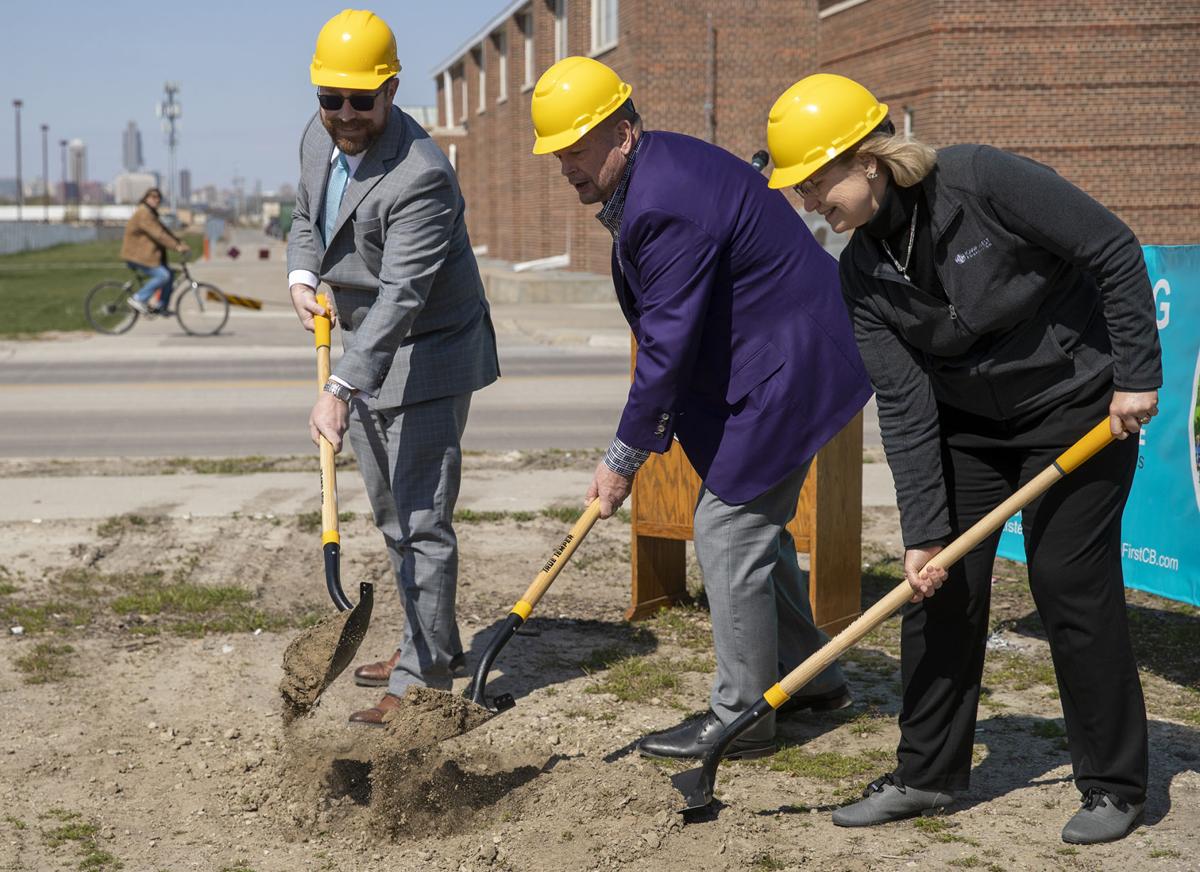 From left, Council Bluffs Director of Community Development, Mayor Matt Walsh and Iowa West Foundation President and CEO Brenda Mainwaring break ground for a new trail, which will run between 16th and 35th streets along the First Avenue corridor, during a short ceremony on Thursday, April 22, 2021. 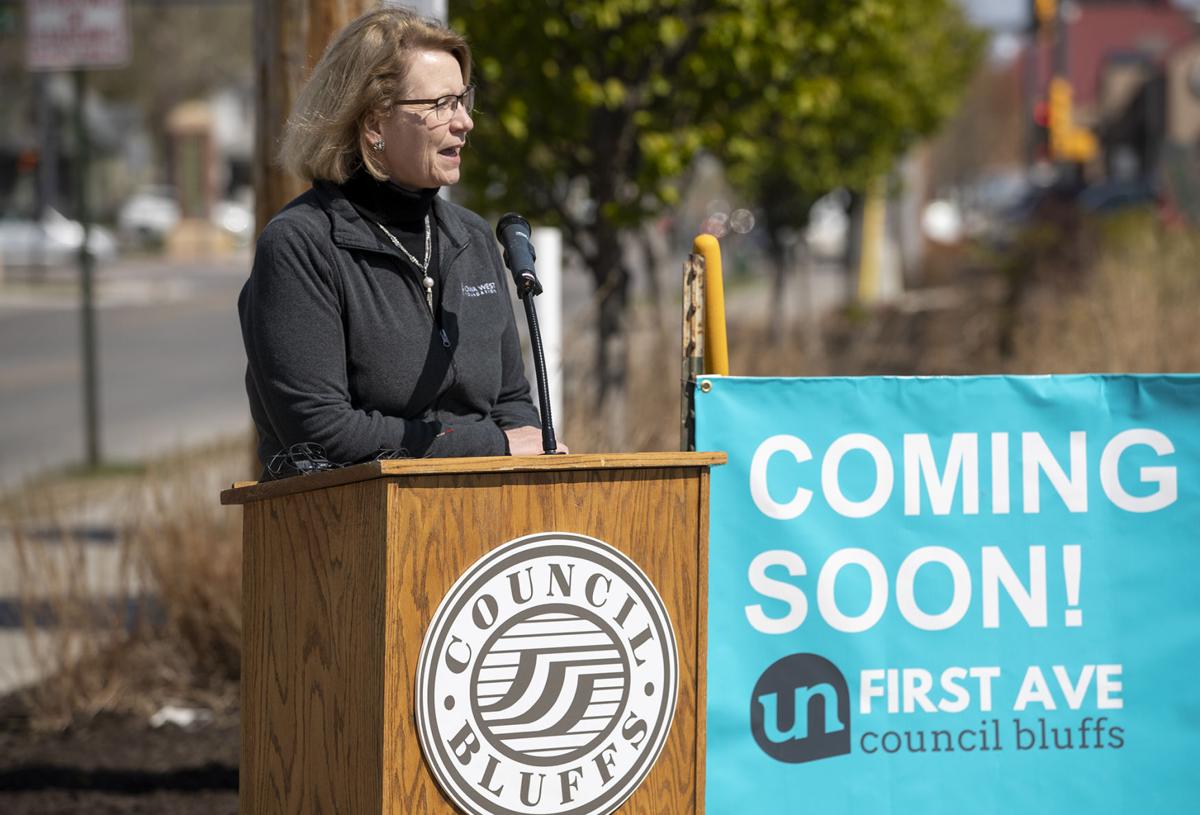 Iowa West Foundation President and CEO Brenda Mainwaring speaks during a groundbreaking ceremony for a new trail that will run between 16th and 35th streets along the First Avenue corridor, on Thursday. 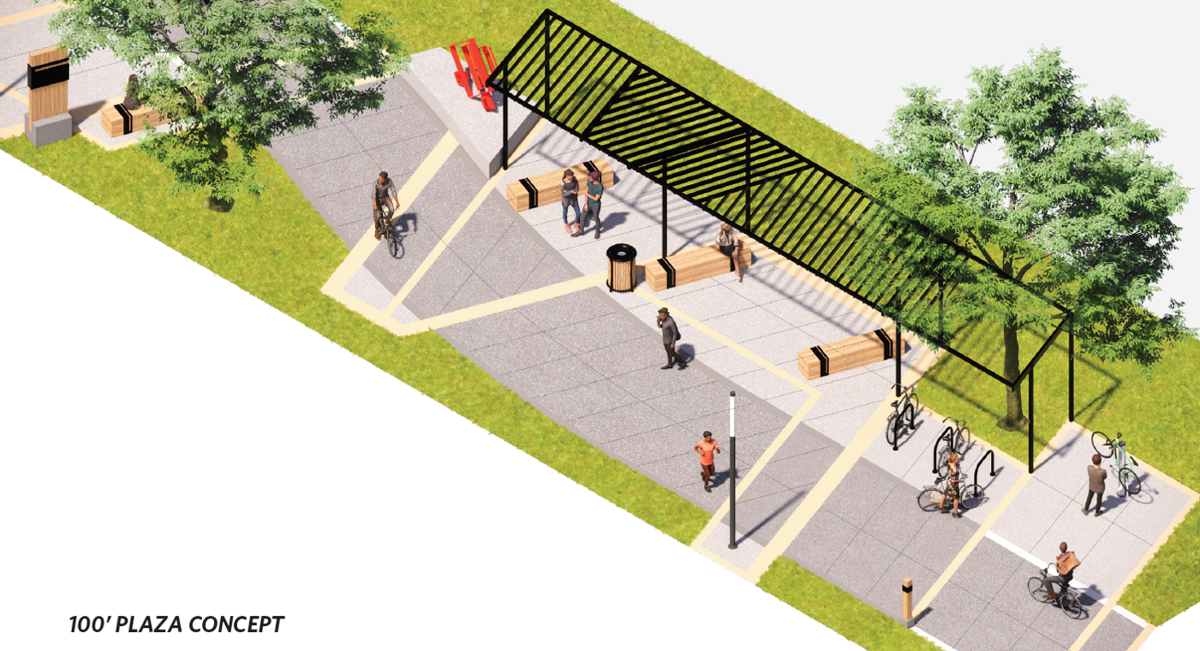 An example of the plazas that will be located along the First Avenue trail.

A rendering of the First Avenue trail.

A rendering of the First Avenue trail’s path past Thomas Jefferson High School.