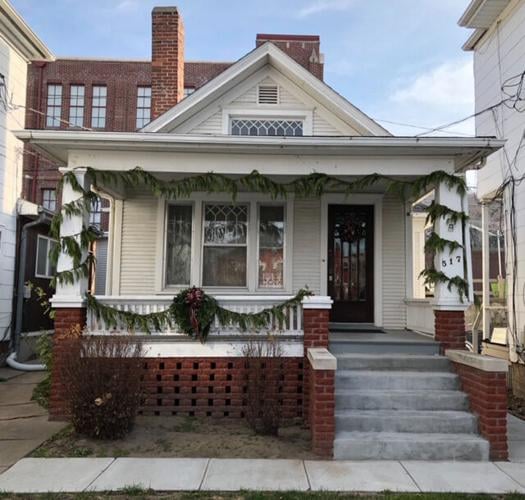 The Bregant House, a Craftsman Bungalow, is one of seven historic homes on Preserve Council Bluffs' Historic Homes for the Holidays Tour this year. 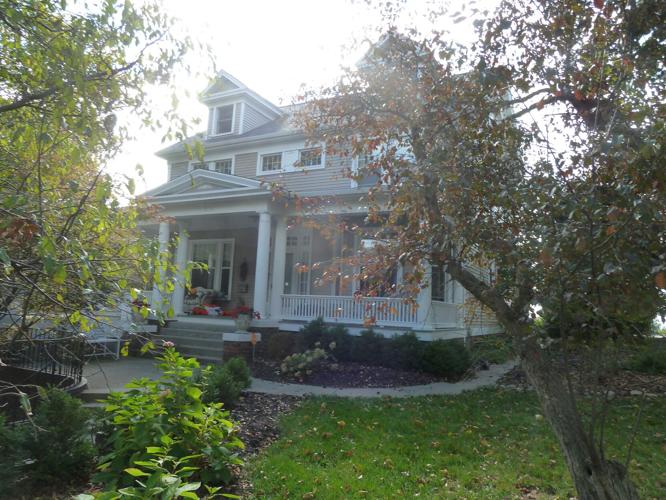 The Henry and Grace Hazelton House dates from circa 1905.

Seven festive homes await guests in the 2022 Historic Homes for the Holidays Tour.

The annual event is a fundraiser for Preserve Council Bluffs.

The Bregant House is a 1912 Craftsman Bungalow built to accommodate Jean and Inez Bregant, two retired vaudeville performers who stood 45 and 42 inches tall, respectively, according to the program furnished by Preserve Council Bluffs. The ceilings and doorways were high enough to accommodate their average-size friends, but fixtures, appliances and some furniture was scaled to their size.

The two met while performing in a vaudeville show at Coney Island, New York. They were married in Council Bluffs on Christmas Eve in 1905 but continued to perform for a few more years. They eventually returned to Council Bluffs, where they became official representatives of Woodward Candy Co. of Council Bluffs. The couple later sold candy inside Beno’s Department Store.

Preserve Council Bluffs purchased the home in April 2012 with the help of a $50,000 anonymous gift and performed restoration work on the house. It has been designated a local landmark and was listed on the National Register of Historic Places in November 2013.

The Beno House, built circa 1928, is an example of the Tudor Revival style. This is identified by steeply pitched, gabled roofs and cross gables, half timbering on gable ends or second floors and multi-paned windows. This particular home is a notable example of a more high-style expression Tudor Revival. Bernard Beno, treasurer of The Beno Co., had the house built for his daughter. The Beno Co. was a department store known for dry goods, clothing, carpets, notions and millinery. The Beno Co. was in business in Council Bluffs until 1987. The house is now the home of Kim Kolakowski.

The Hazelton House, a two-story, side-gabled house, was likely architect-designed. It features two closed dormers on the front roof slope, several original multi-panes over single-pane and fixed-pane windows, one-story rounded bay windows on sides and front and a full width front porch with extended pediment entryway. The porch has full height paired and single round fluted columns and wide railing. Builder Henry Hazelton was connected to the Council Bluffs Savings Bank as an assistant cashier. The house is now the home of John and Sally Madsen.

The Hight House is an example of a Foursquare-type home that was popular from the 1890s until the 1920s. There are typically four rooms on the first floor and four rooms on the second floor. Home builder B.W. Hight was an attorney who advertised as doing general practice in state and federal court with special attention given to settlement of estates and titles to real estate. The structure is now the home of Teresa Chamberlain.

The Hughes House is an example of a Bungalow/Craftsman home. There are 15 examples of this style of architecture in the Willow/Bluff/Third Street Historic District. The Craftsman style became popular in California but quickly spread to the Midwest. This home has a unique shared fireplace — one side on the porch and one in the living room. Home builder John Hughes was a district agent of Northwestern Mutual Life Insurance Co., while George F. Hughes was a contractor, postmaster and amateur thespian of considerable reputation. The house is now the home of Lynn and Chris Miles.

The Officer House is another example of a Foursquare-type home that originated in the Prairie School style of architecture and is essentially a two-story cube. It is one of 28 Foursquare homes in the Willow/Bluff/Third Street Historic District. Builder Charles T. Officer came to Council Bluffs via steamboat with his parents in 1856. After graduating from college in Pennsylvania, he returned with his wife to Council Bluffs, where he worked as a bank teller and eventually a successful real estate agent. He died in 1943 and is buried in Walnut Hill Cemetery. The house is now the home of Chad and Kate Gaul.

The Oliver House is identified as “eclectic,” because its design mixes two or more different architectural styles. It is one of only four homes in the Park/Glen Avenue Historic District to be identified as such. It was originally built as a one-story home by Scottish emigrant John T. Oliver, who was the first merchant tailor in Council Bluffs. He lived there with his wife and five children. A second story was added to the home in 1960. The house is now the dwelling of Alex and Rachel Kouri.

Finishing the renovation of the first floor of the Lewis House

The organization is always looking for volunteers who can paint, tile, drywall, sweep, clean, type, draw, etc. “If you have a skill, we can find a project for you,” said the program.

“We are always looking for donations of items and memorabilia unique to Council Bluffs,” it continued.

Tickets for the 2022 Historic Homes for the Holidays Tour can be purchased in advance for $20 online at PreserveCouncilBluffs.org or can be bought at any house on the tour. They are also good for half off admission that day at the Historic General Dodge House, 605 Third St., which is open from 1 to 5 p.m. on Sundays.

Two southwest Iowa brothers and their wives were blessed with baby boys on the same day last month.

As temperatures continue to drop, the anticipation for ski season is on the rise and Pottawattamie Conservation is hard at work making sure Mt…

PHOTOS AND VIDEO: Santa Claus is coming to town

The month of December brings many different celebrations; Christmas, Hanukkah and Kwanzaa are just some of the holidays that folks are prepari…

Hello from SOLAS, and welcome to the next chapter of cats, cats, kittens!

Researchers know pregnant moms’ brains change in ways that seem to help with caring for a baby. Now they've ID'd changes in new dads’ brains too.

SOLAS: Caring for cats during the holidays

Hello from SOLAS, and welcome to the next chapter of cats, cats, kittens!

Surge in cases leads to shortage of flu meds in Nebraska

Flu activity in Nebraska is "very high" right now, and pharmacies say they are having some difficulties keeping anti-flu medications in stock.

Influenza continued its sharp rise last week, both in Nebraska and the nation. Nebraska recorded just over 1,900 cases of flu last week, up by 700 from the week before.

Ugly Christmas sweaters are now a holiday staple, even for some pets

The Bregant House, a Craftsman Bungalow, is one of seven historic homes on Preserve Council Bluffs' Historic Homes for the Holidays Tour this year.

The Henry and Grace Hazelton House dates from circa 1905.