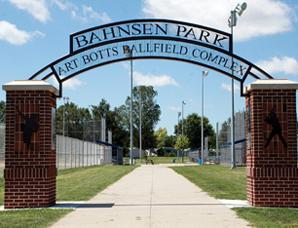 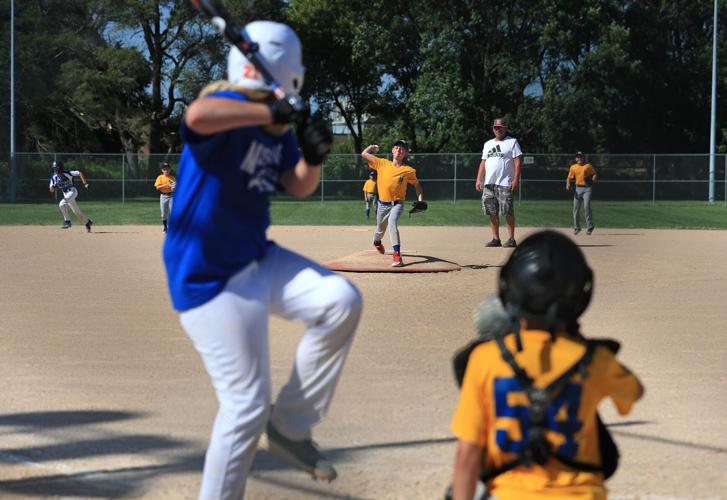 Omaha Holy Cross pitcher Paul Brannen, center, pitches against the Council Bluffs Mustangs in the first inning during the Blake Smith Memorial Tournament at Bahnsen Park on Saturday, June 29, 2019. At the Nov. 28, 2022 city council meeting, council members voted to approve a resolution awarding a $98,500 contract to HGM Associates, Inc. for the design and engineering of a Yankee Stadium Replica Field at Bahnsen Park.

At the Nov. 28 city council meeting, council members voted to approve a resolution awarding a $98,500 contract to HGM Associates, Inc. for the design and engineering of a Yankee Stadium Replica Field at Bahnsen Park.

With such a high cost, the resolution elicited a lively conversation earlier in the day during the city council’s study session, where Parks and Recreation Director Vince Martorello reassured the council members that, no, “we are not recreating Yankee Stadium.”

The idea is to redesign Bahnsen Park’s field to resemble that of Yankee Stadium, with a facade 75% in scale around the field “to let folks know that this is the Yankee Stadium layout,” Martorello said.

The project would involve concrete and plaza improvements, new lighting and a new fence, which are all things that the city’s ballfields need anyway.

“The facilities in parks, and the assets we have, have not been invested in (for) over 20 years in a lot of them,” Martorello said.

Upgrading the parks, and adding some big league charm, can also help bring those leagues and tournaments to the city, Martorello said.

“We are struggling with competition in other venues trying to increase the attraction of our fields and tournaments,” he said at the study session. “So when I look at it through that lens, I think an initial investment to give us a potential direction that we can discuss is worth it.”

Once HGM, the Omaha-based architectural firm, comes back with a design and cost estimate, Martorello will bring it back before the city council to determine whether to go ahead with constructing the Yankee Stadium frontispiece.

The funds for hiring HGM will come from the budget allocated to the Bahnsen Park project. The city council previously approved a total of $300,000 for the project when it passed the fiscal year 2023 Capital Improvement Program last December.

Bahnsen Park is named for Council Bluffs local and Abraham Lincoln High School alumni Stan Bahnsen, who played 14 years in the major leagues. Bahnsen, who played college ball at the University of Nebraska-Lincoln, was drafted by the New York Yankees in 1965 as a pitcher.

Bahnsen, a power pitcher appropriately nicknamed “The Bahnsen Burner,” won the 1968 American League Rookie of the Year award after going 17-12 with a 2.05 ERA and 162 strikeouts.

After four seasons with the Yankees, Bahnsen made stops in Chicago, Oakland, Montreal and Anaheim, before finishing his career in Philadelphia.

If the Bahnsen Park Yankee Stadium project is successful, Parks and Recreation already has plans to turn other city parks into miniature Major League fields of dreams.

“The plan (is to) upgrade that one field, then Fenway Park was another. We’re looking at going through our entire system and making upgrades and investing,” Martorello said. “Westwood (Park) is designated for Wrigley Field.”

Council Bluffs firefighters found a dead man and a dead dog inside a burning house near Lake Manawa.

Earth's inner core may have stopped turning and could go into reverse, study suggests

Scientists are weighing in on what it might mean.

Around the Council Bluffs Area Chamber of Commerce, the third Friday of each month — known as “Foodie Friday” — provides young professionals a…

State inspectors say another resident of the same care facility was evicted when the staff dumped his belongings outside and wheeled him out the exit door with nowhere to go.

State, city and county food inspectors have cited Iowa restaurants and stores for hundreds of food-safety violations during the past four weeks.

While reading Madison Russo’s social media posts about having cancer, medical professionals noticed inaccuracies in the photos she posted of herself, according to a search warrant filed by Eldridge Police.

A TikTok captured in a Lincoln nail salon has gone viral, garnering over 16 million views on the social media platform.

Des Moines Police said a student and a teacher were taken to hospitals in critical condition, and another person was in stable condition.

State Department says don't use Uber in areas around Cancun

State Department says don't use Uber in areas around Cancun

Omaha Holy Cross pitcher Paul Brannen, center, pitches against the Council Bluffs Mustangs in the first inning during the Blake Smith Memorial Tournament at Bahnsen Park on Saturday, June 29, 2019. At the Nov. 28, 2022 city council meeting, council members voted to approve a resolution awarding a $98,500 contract to HGM Associates, Inc. for the design and engineering of a Yankee Stadium Replica Field at Bahnsen Park.