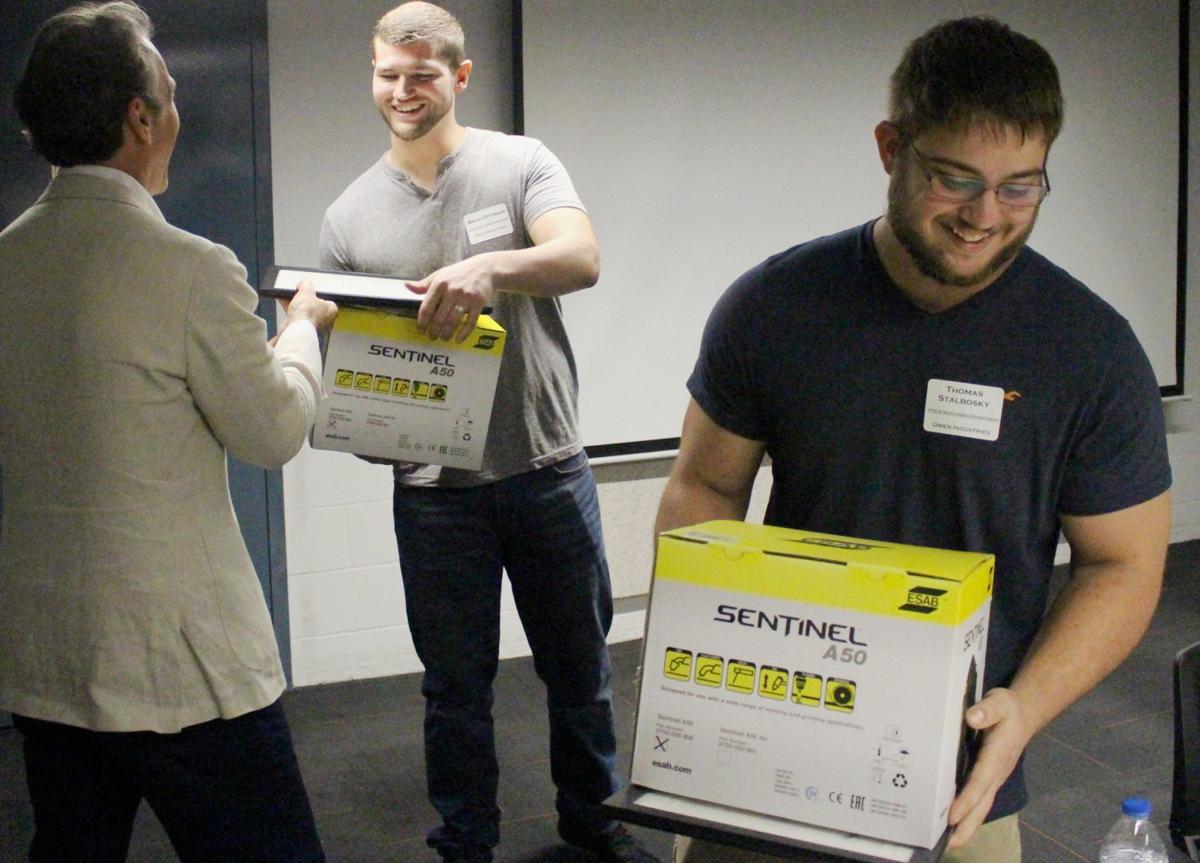 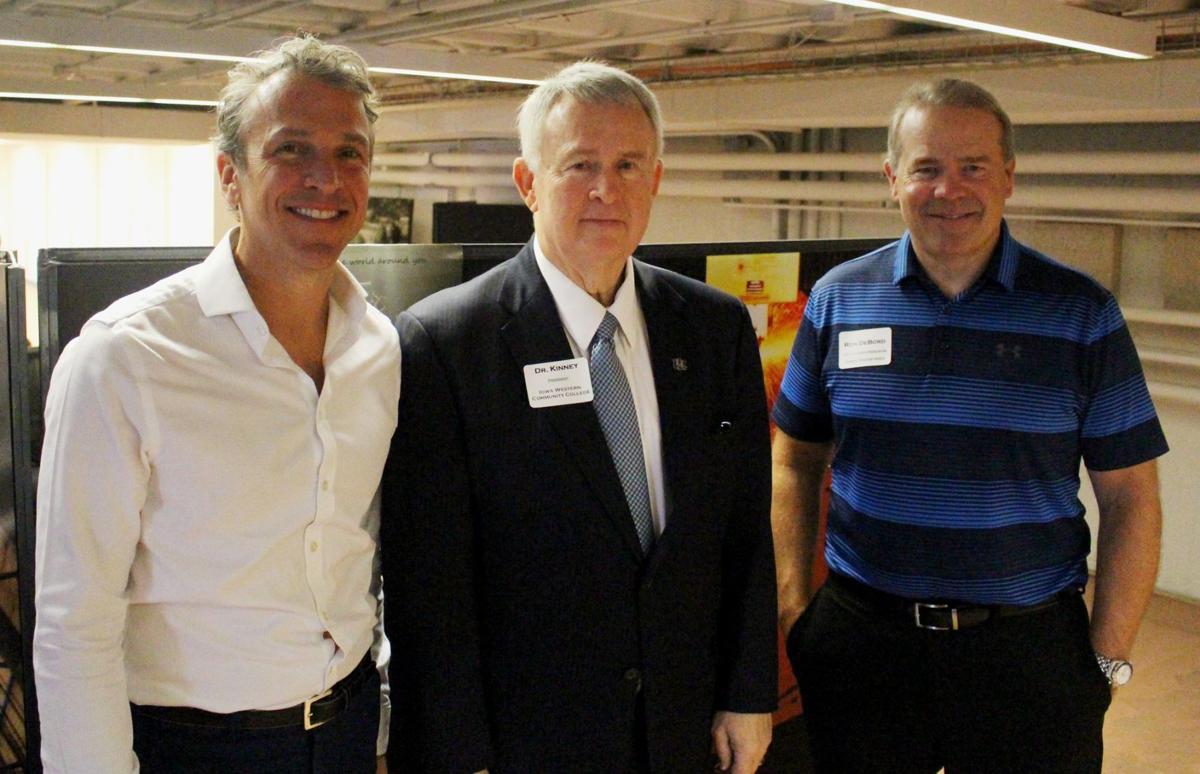 Brad Dittman, left, and Thomas Stalbosky show off certificates of completion from the U.S. Department of Labor after becoming journeyman welders through an apprenticeship program at Owen Industries in Carter Lake, Iowa, on Wednesday, Oct. 3, 2018. 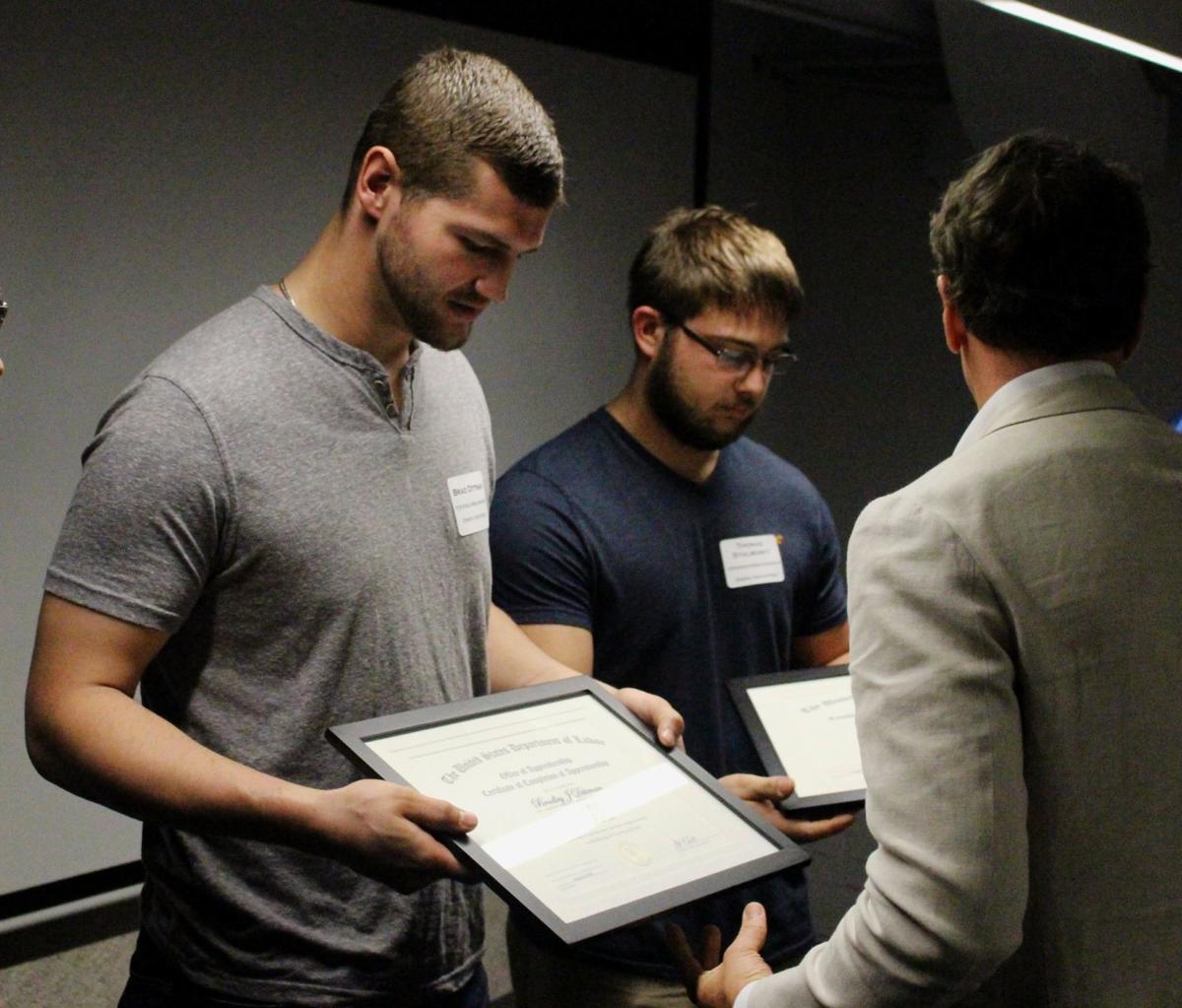 It took a year before Stalbosky found a job that would teach him more about welding. He worked as a shift supervisor for a car wash. Then he learned about an opportunity to become a welding apprentice.

PVS Structures, a steel fabrication company in Carter Lake, offered Stalbosky something others didn’t: An opportunity to “earn while you learn” as a full-time employee, where he received a steady paycheck while completing a nationally-accredited academic program through Iowa Western Community College.

“There are a lot of people who can’t afford to pay for schooling and a full-time job to keep living,” Stalbosky said. “Then you have places like this that offer a full-time job and pay for the schooling.”

Stalbosky joined fellow apprentice Brad Dittman as the first two graduates of the program. They were recognized Wednesday at an informal luncheon at the company’s campus along Avenue H in Carter Lake, where they were presented certificates and new welding helmets.

Tyler Owen, president of Owen Industries, the parent company of PVS, said he “could not be more excited” by the success of the apprenticeship program, which was launched with support from Iowa Western in 2016.

“It blows me away,” Owen said.

The company currently has three active apprentices from its second-year class and plans to hire several more from a pool of more than 75 applicants. Dittman and Stalbosky will help mentor apprentices now that they’ve become journeyman welders.

Dittman said the apprentices will learn while on the job. They’ll improve their skills while creating value for the company, a win-win that creates employees with the knowledge they need for future success.

There’s a growing need for welders and other skilled laborers. Ron DeBord, vice president of human resources at Owen Industries, said there will be a shortage of 400,000 welders nationally by 2024 – a challenge that’s exacerbated by baby boomers retiring over the coming decade.

“It’s more than on our doorstep. It’s in our kitchen,” DeBord said. “As we looked at that as a company, we determined that we were going to take ownership of that issue.”

Creating an apprenticeship program through Iowa Western was “seamless” and involved securing grants along with approval from the U.S. Department of Labor. DeBord said the program has drawn significant interest in a job market with low unemployment and the apprentices have exceeded expectations.

“If we continue to just look for people who have skills and tenure, not all of us are going to come to satisfy our goals for growth,” DeBord said. “There are not enough skilled-labor individuals around, because you’re seeing a record rate of retiring skilled-trade workers, and that’s not going to change in the near future.”

Owen Industries offers the first competency-based welding apprenticeship program in Iowa, a strategy encouraged by Iowa Western to focus on achieving results. The apprentices are asked to demonstrate mastery of skills instead of sitting through a predetermined number classroom sessions, allowing them to go faster through topics they understand and slow down on tougher subjects.

Dan Kinney, president of Iowa Western Community College, said the college has championed the value of offering competency-based apprenticeships. Because it’s competency-based, the college was able to condense Owen Industries’ program to two years, instead of three, allowing for faster advancement. That allows more people to move through the program onto rewarding careers.

— Scott Stewart is a freelance journalist and communications consultant. This article was prepared on behalf of Iowa Western Community College’s Division of Economic and Workforce Development.

Council Bluffs Community Schools students to head back to school buildings on Aug. 24

Council Bluffs Community School District plans to have students back in school when classes resume this fall, according to an update released Friday.

Heartland Christian School now has a Return to Learn plan in place for this fall.

Support Staff Member of the Year: Petersen an important part of team at Hoover

BLink, the free public Wi-Fi service launched in Council Bluffs in October 2015, will soon be available in Carter Lake, according to a local t…

A state program serving Iowa’s deaf and blind children will offer a three-part online class on loneliness in deaf and hard-of-hearing children.

Remote instruction, on-site instruction and alternating between the two might all be part of the 2020-21 school year.

*Editor’s note: This article was originally published Sunday in the Nonpareil’s annual Faces section, a 6-day series that concludes Saturday. …

Carter Lake Elementary School teacher Britney Beatty has been named Teacher of the Year for 2019-20 for the Council Bluffs Community School District.

Brad Dittman, left, and Thomas Stalbosky show off certificates of completion from the U.S. Department of Labor after becoming journeyman welders through an apprenticeship program at Owen Industries in Carter Lake, Iowa, on Wednesday, Oct. 3, 2018.