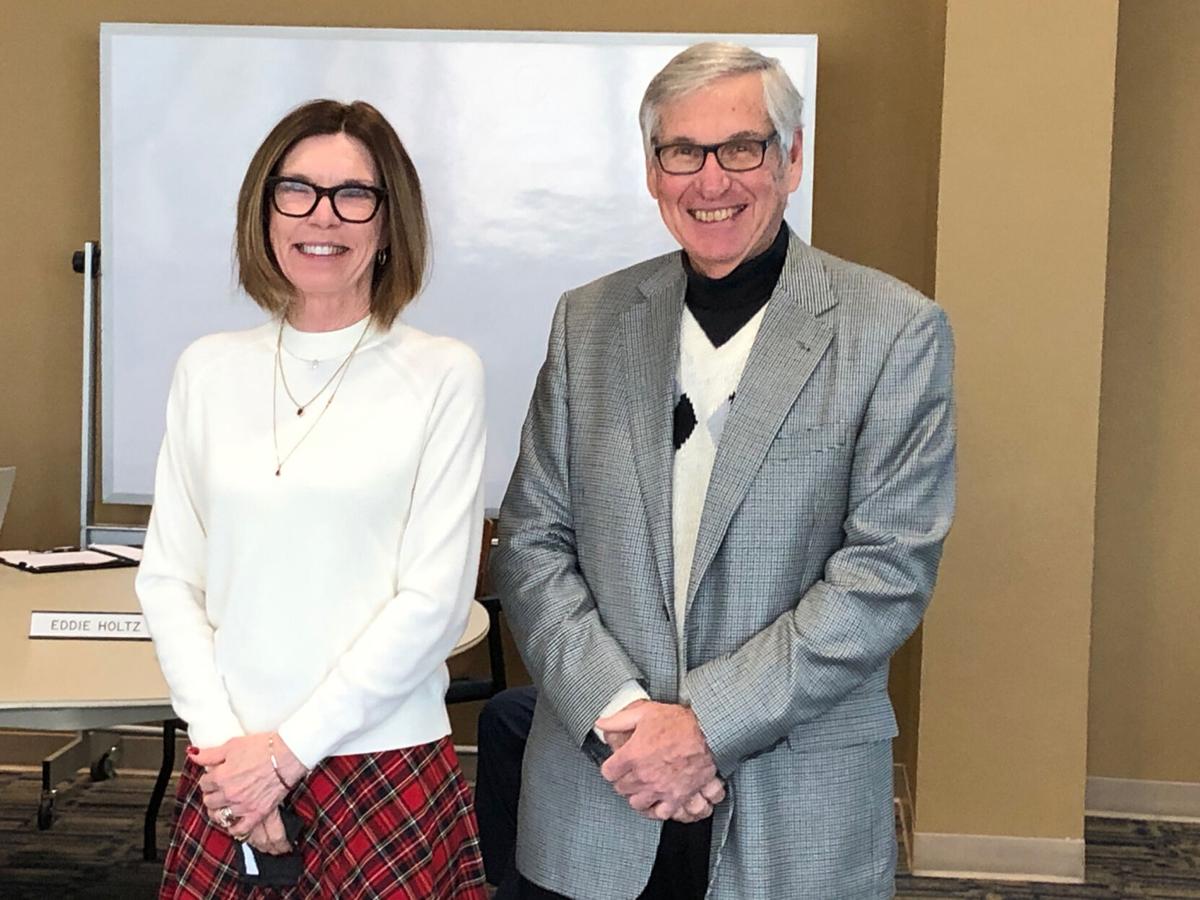 From left, Connie Hornbeck and Dr. John Marshall, president and vice president of the Iowa Western Community College Board of Trustees, respectively. 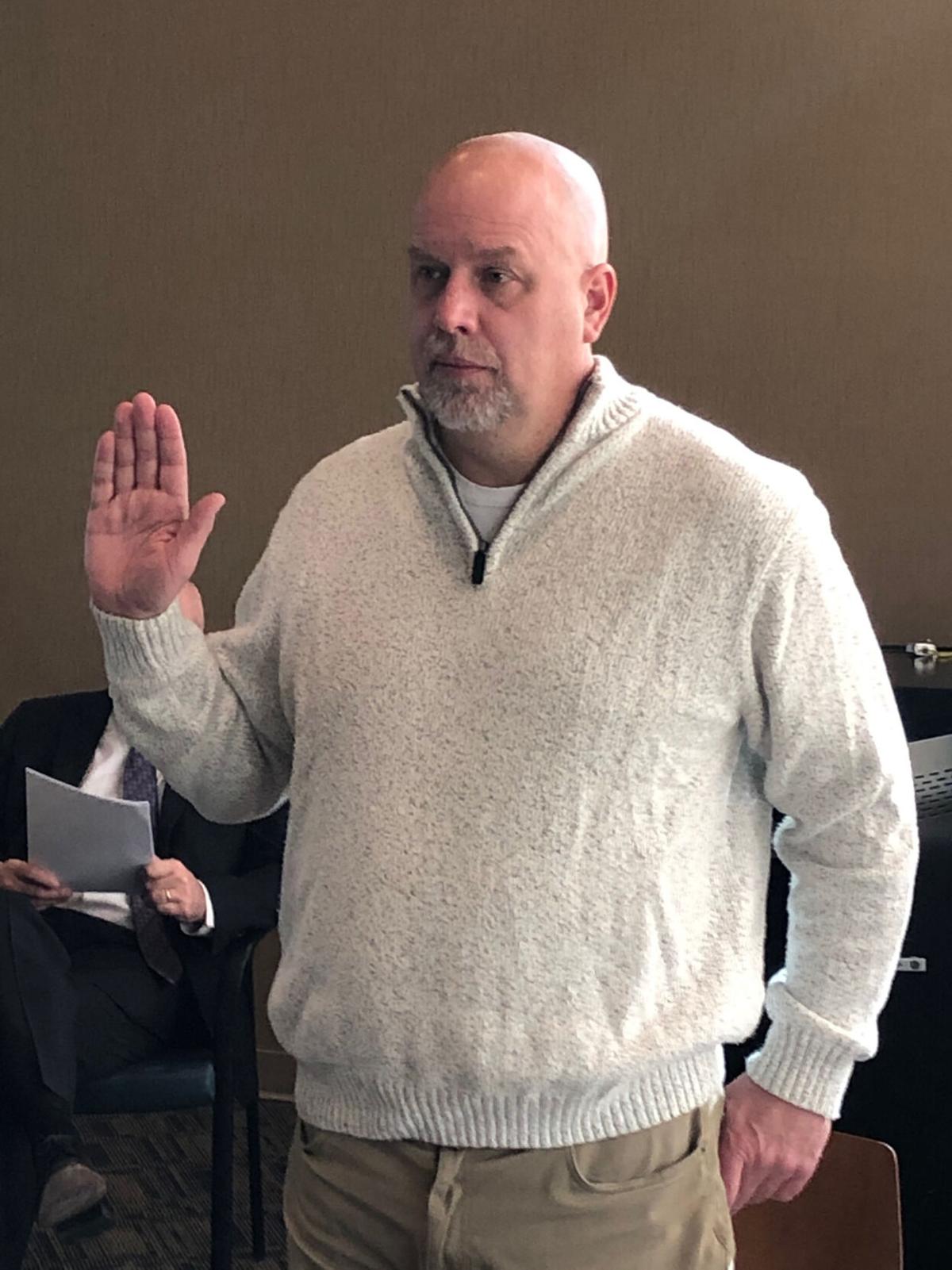 Matt Johnson is sworn in as District 5 representative on the Iowa Western Community College Board of Trustees on Monday, Jan. 11, 2021.

It’s a new year, and there are two new presidents at Iowa Western Community College.

Dr. Daniel Kinney, who replaced his father last week as president of the college, is set to set out today to start visiting the college’s satellite locations, he said at Monday’s meeting of the Iowa Western Board of Trustees. He will be asking about each attendance center’s strengths and things that need to be improved, as well as getting to know people at each one.

“I’ll be going on a listening tour,” he said.

Kinney also met with the board during its retreat Saturday. It was partly to get better acquainted with board members and to touch base on goals for this spring, he said.

“Everybody’s been friendly,” he said. “I’ve been talking to a lot of faculty and staff — not very many students. I’ll start talking to them now they’re back.”

Monday was the first day of classes after winter break.

Kinney said he has a “great cabinet.”

“They have done a good job of bringing me up to date,” he said.

Kinney said he will be following the Iowa Legislature and watching to see what comes out of the new coronavirus relief bill for colleges. Gov. Kim Reynolds is expected to release her budget proposal today, he noted.

The board accepted the resignation of former board President Brent Siegrist, who’s now serving in the Iowa House of Representatives, then swore in Matt Johnson, who replaced him as District 5 representative. Johnson will serve out the remainder of Siegrist’s term, which ends this fall. Johnson, owner-operator of Barley’s Bar & Grill, is an Iowa Western alumnus and serves on the Culinary Arts Advisory Committee.

Hornbeck, of Missouri Valley, will continue as the board’s representative to the Iowa Association of Community College Trustees, and board member Scott Robinson will serve as alternate.

She said it felt “wonderful” to become president of the board. She said she was “excited and honored” to be elected.

“I think we have a great team,” Hornbeck said.

She said she is looking forward to working with Kinney as he leads the college.

Hornbeck has represented District 8 since 1995, most recently as board vice president. She has also served as board chair of the Iowa Association of Community College Trustees and board chair of the national Association of Community College Trustees and is currently chair of the IACCT Financial Oversight Committee and Iowans for a Skilled Workforce and has served as chair of various other committees of Iowa Western, IACCT and ACCT over the past 25 years.

A royally grand castle would surely be the best place to hold an extravagant dinner party — especially one involving murder and mystery.

Kids & Company will host a distribution of U.S. Department of Agriculture Farmers to Families food boxes today for the second straight week.

Coronavirus, communication, bullying and career and technical education were among the topics raised during a virtual town hall meeting held b…

Kids & Company will host a distribution of U.S. Department of Agriculture Farmers to Families food boxes today for the second straight week.

From left, Connie Hornbeck and Dr. John Marshall, president and vice president of the Iowa Western Community College Board of Trustees, respectively.

Matt Johnson is sworn in as District 5 representative on the Iowa Western Community College Board of Trustees on Monday, Jan. 11, 2021. 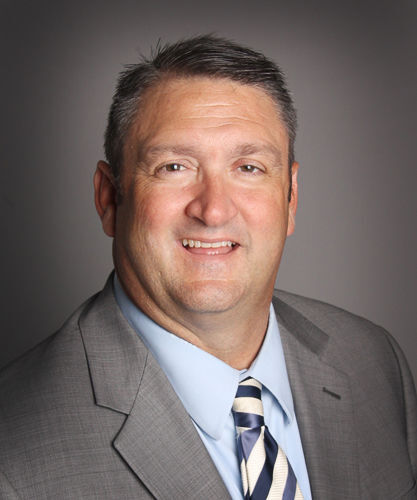