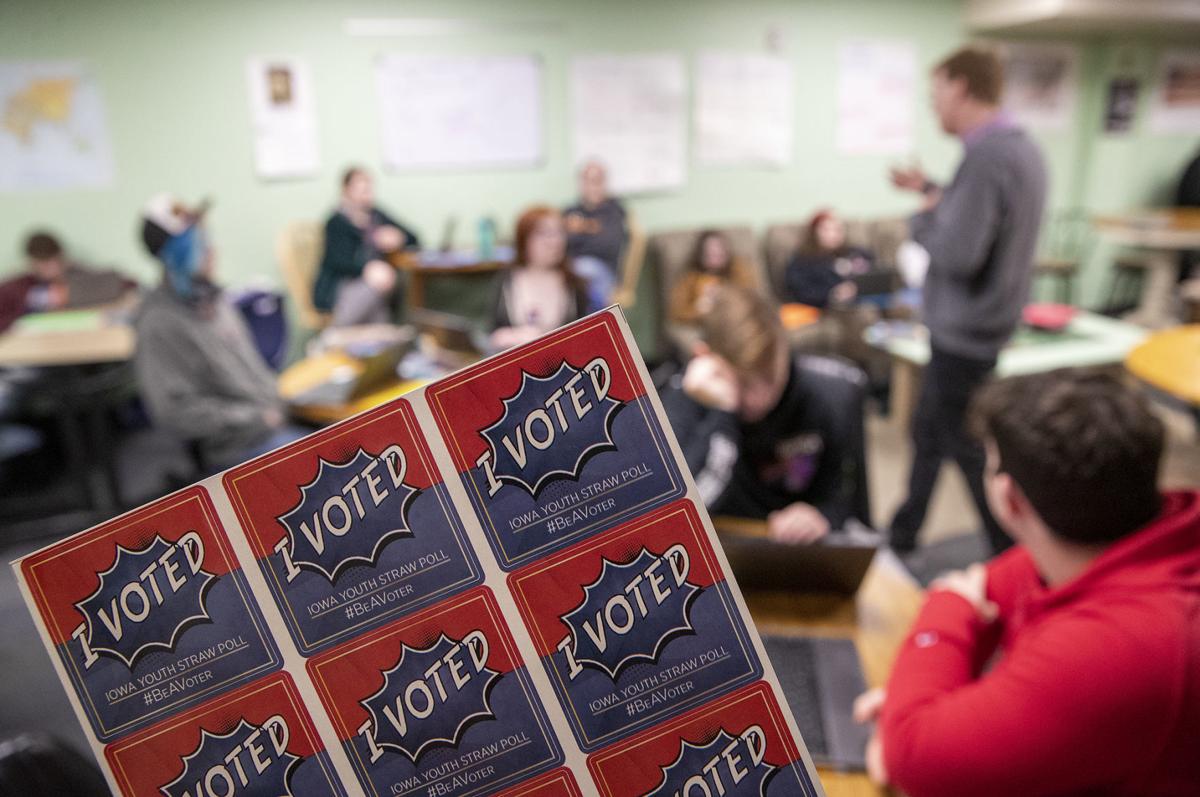 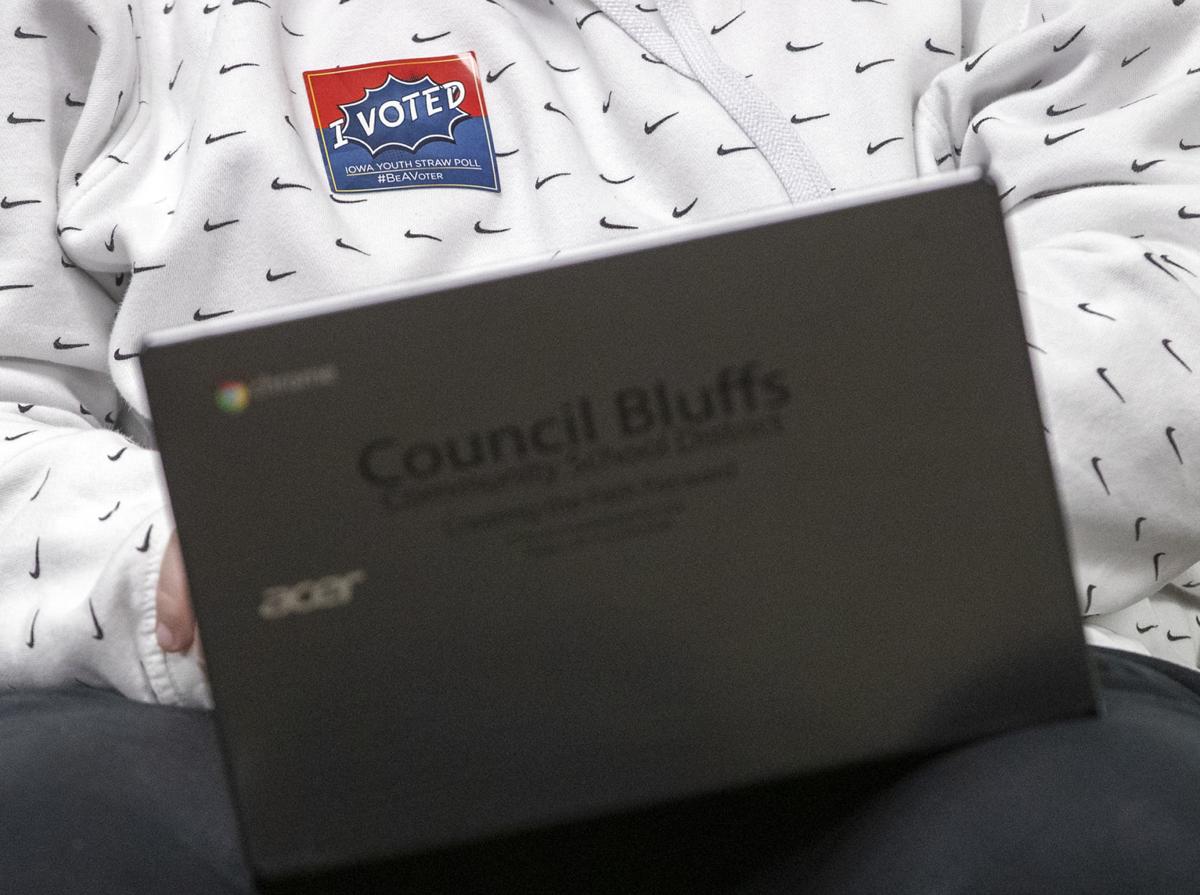 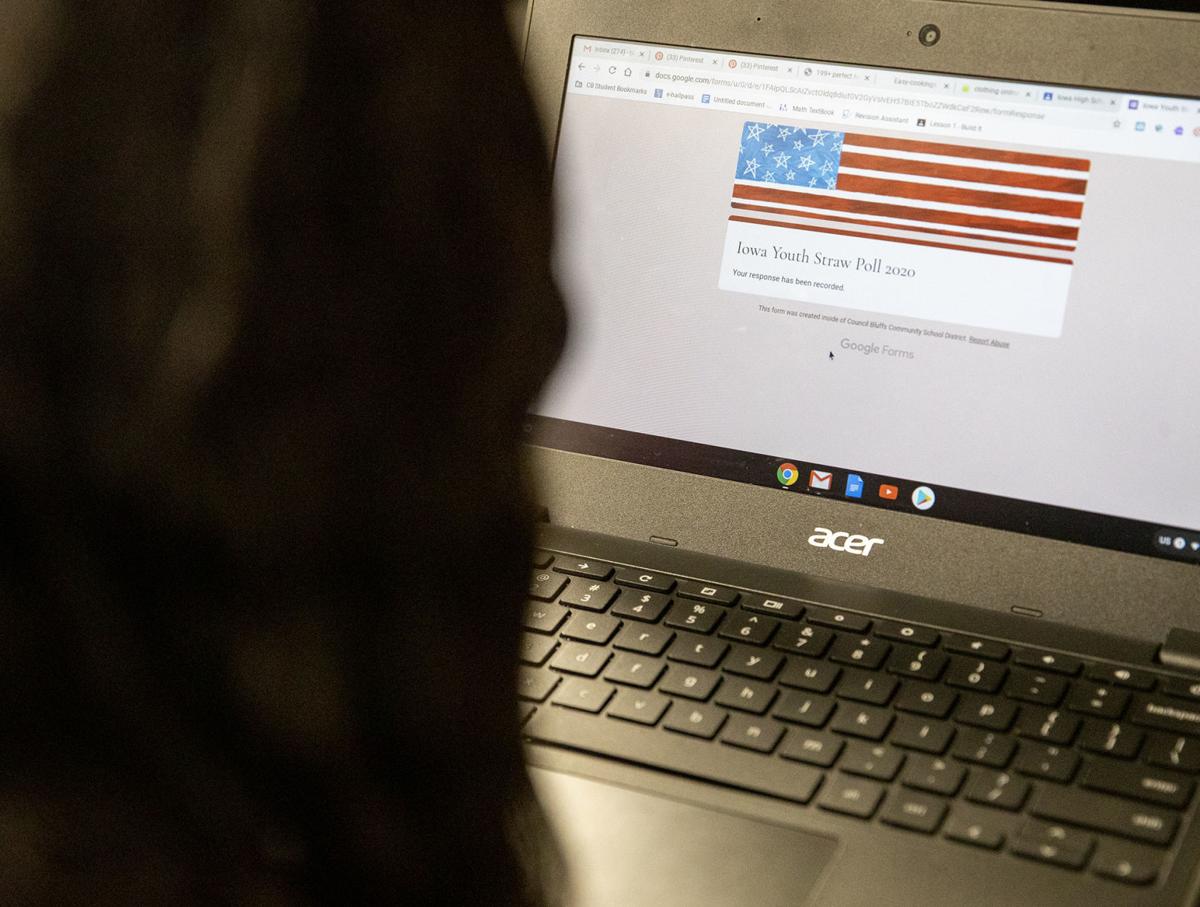 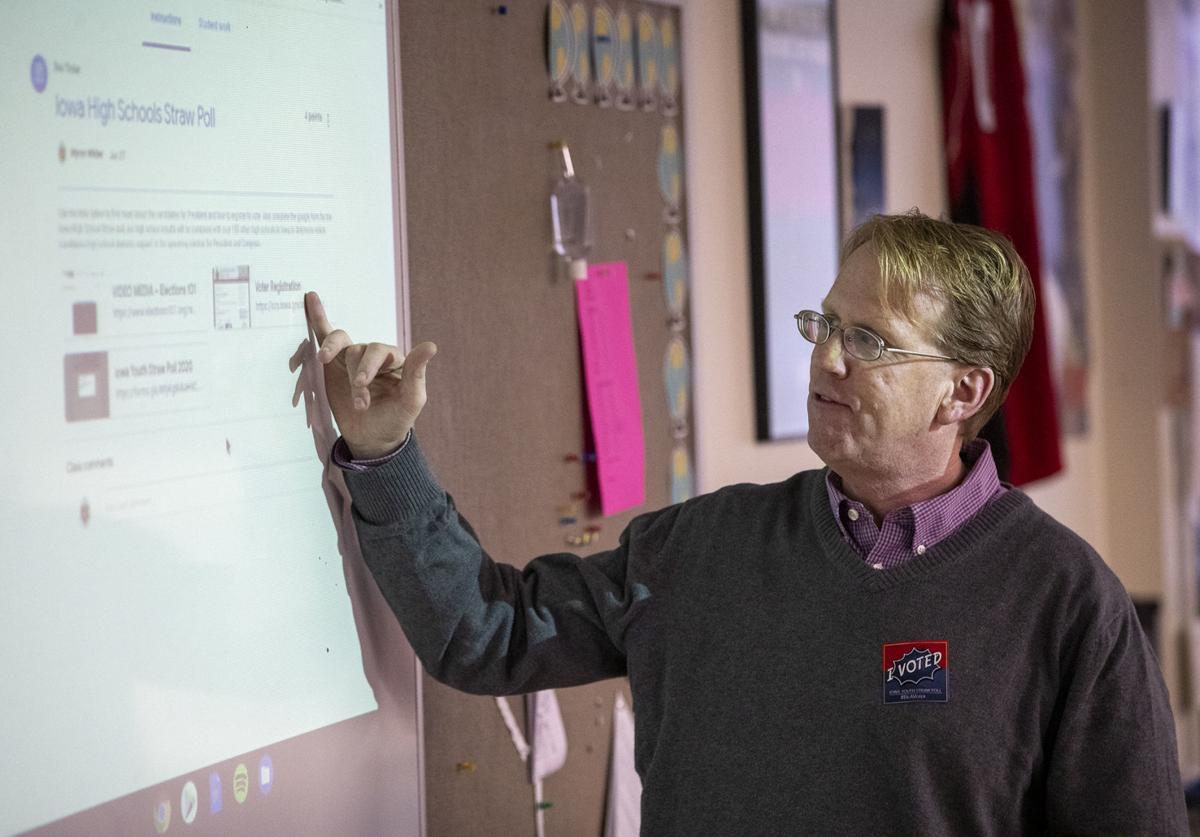 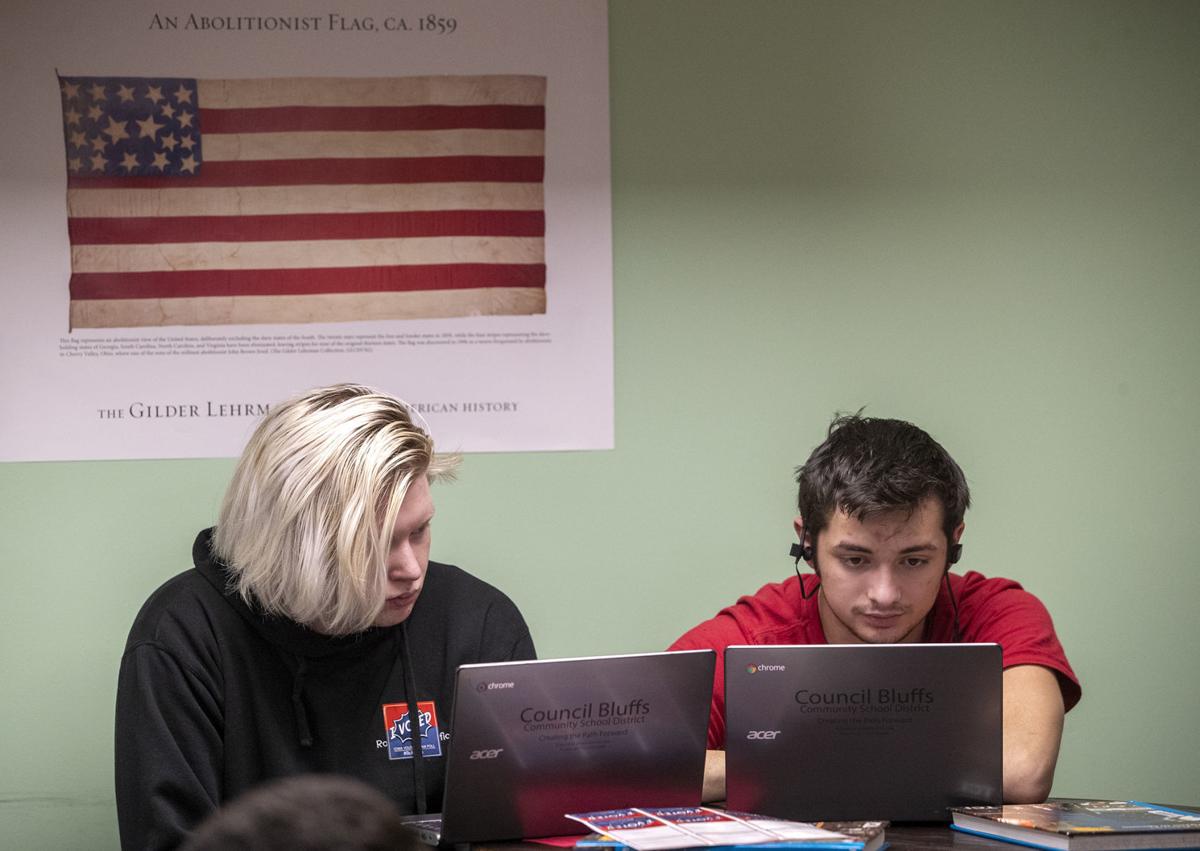 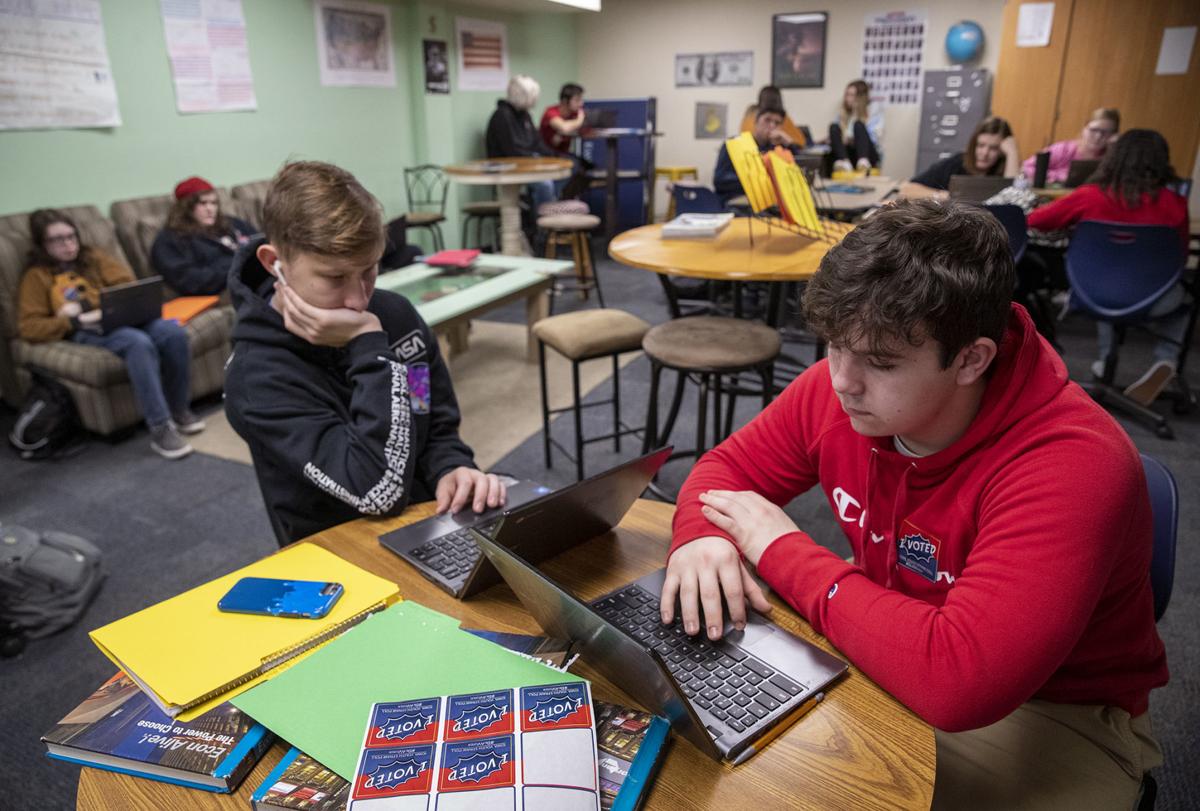 More than 26,000 high school students across Iowa — including juniors at Abraham Lincoln High School — beat the state’s caucuses by voting in a straw poll Tuesday at their schools.

The survey is administered annually by the Iowa Secretary of State’s Office. If it is not an election year, the poll is about a topic of public interest, said Bryan Pregon, social studies teacher at A.L. The topics sometimes interest students more than political candidates, he said.

The A.L. students voted on their Chromebooks using an application that allowed their teachers to see the totals. Results were sent in to the Secretary of State’s Office so statewide results could be totaled.

In 2016, A.L. students voted for Trump over Hillary Clinton, 45% to 35%, said Myron Wilder, also a social studies teacher at the school.

“You guys are actually a pretty good indicator of who’s going to be president,” he told students.

That’s because the students’ votes mostly reflect the views of their parents, Pregon said.

“At this stage, I think it’s still pretty parent-driven,” he said, adding, “Social media has an influence more than it did 15 years ago.”

Several of Wilder’s students — all juniors — shared their thoughts after answering the straw poll.

Tyler Hartmann said he had voted for Yang.

“I think he’s focusing on the correct things,” he said. “Instead of just the economy, it’s the environment and other things.”

Tyler said he had met some Yang volunteers who came to his house but hasn’t seen any of the candidates in person.

“My family’s Democratic, basically,” she said. “I just saw that my brother and my dad were going to vote for him. I’m not really politically involved.”

“I supported Trump because he wants to keep guns, and I’m a firm believer in that,” he said. “I’ve seen the economy go up, and I think he’s headed in the right direction. I also like that he built up the military to protect us.”

“I like his philosophy on trying to get everybody cheaper college,” he said. “College is not something that’s very affordable to me.”

Sam said he hadn’t seen Buttigieg in person but had seen him in one of the televised debates.

At Abraham Lincoln, Axne dominated the race with 70% of the vote. Republican David Young received 24%, and Republican Bill Schafer got 6%.

The vast majority of the students — 85.2% statewide and 83.8% at A.L. — said they planned to register to vote when they were old enough, while the remainder said they would not.

The Iowa caucuses will be held Monday. For more information, go to pottcoelections.org and click on “2020 Iowa Caucus” under “Upcoming & Recent Elections.”

Abraham Lincoln boys tennis has four seniors in its top six making the Lynx one of the most experienced teams headed into 2021.