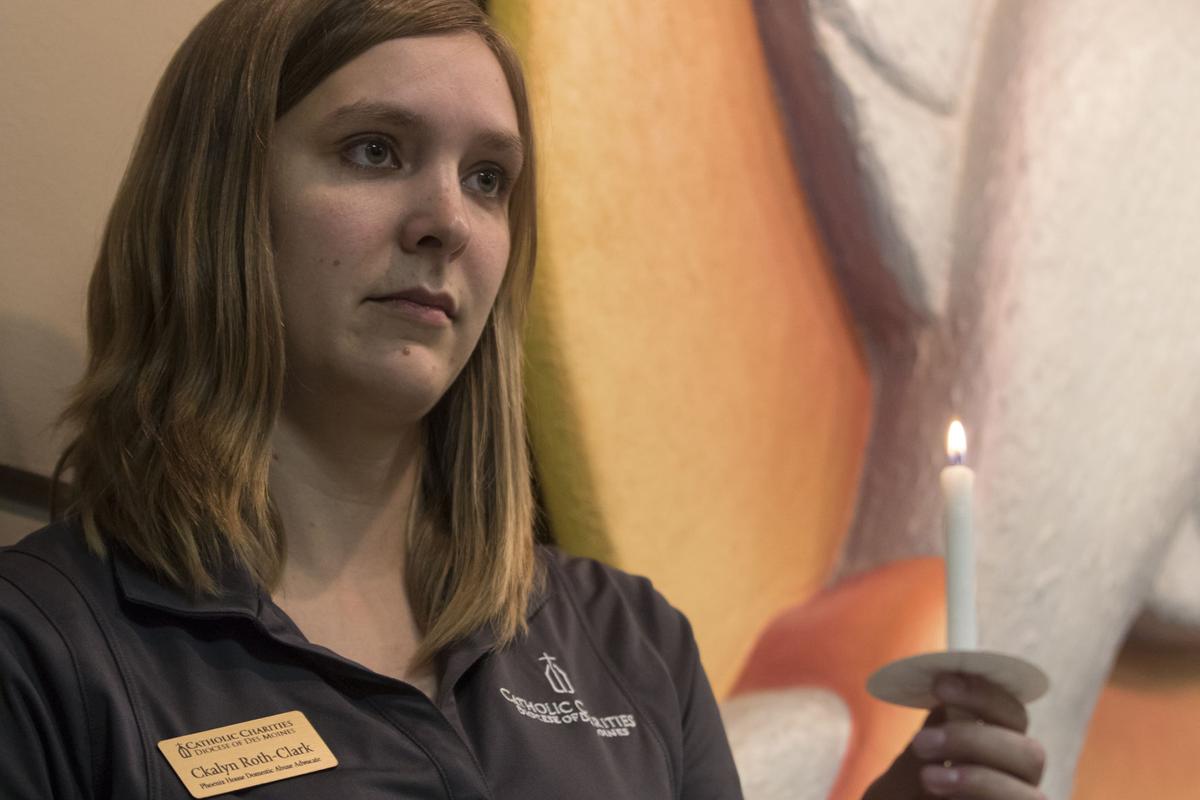 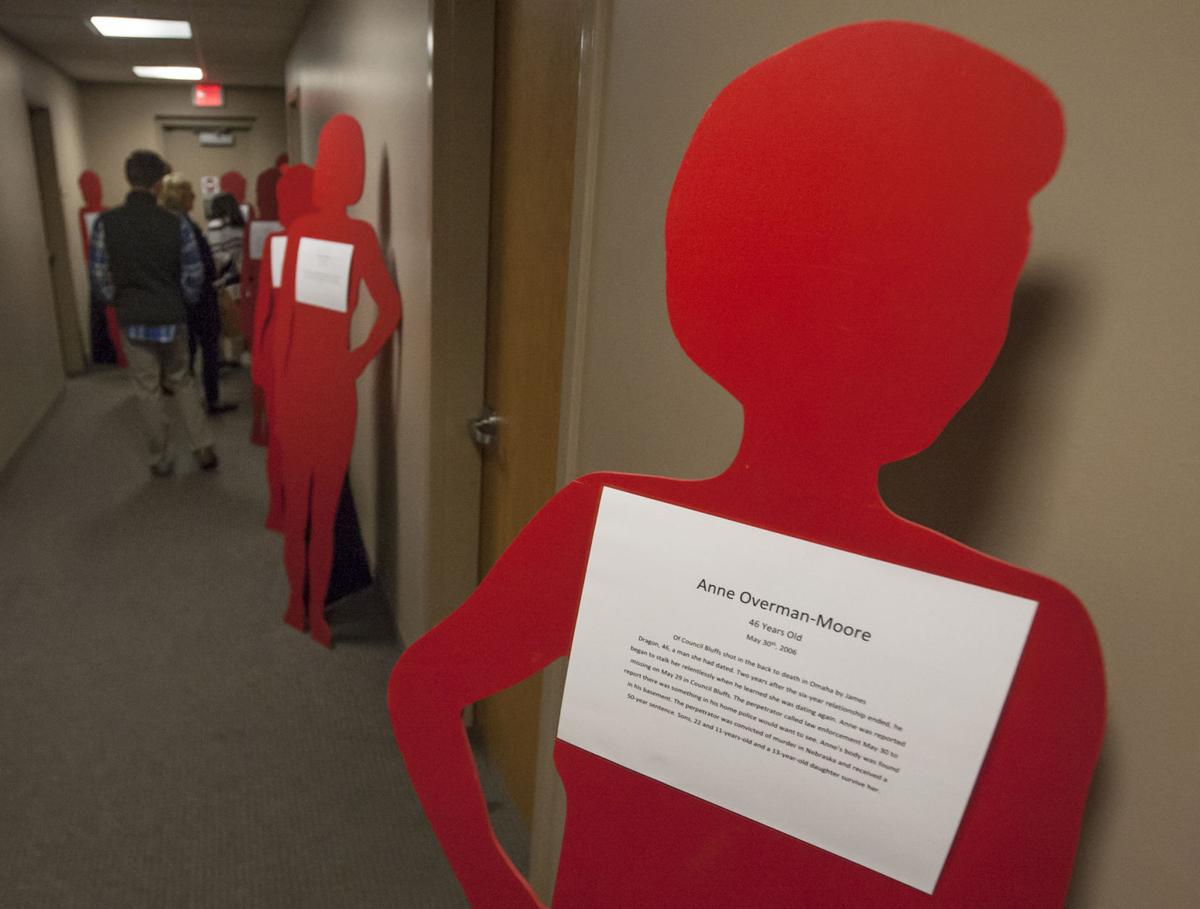 Guests look at a display of "silent witnesses," which tell the stories of domestic abuse victims who were killed by their abusers during a Domestic Abuse Awareness Month event at Catholic Charities Phoenix House on Thursday, Oct. 6, 2016. 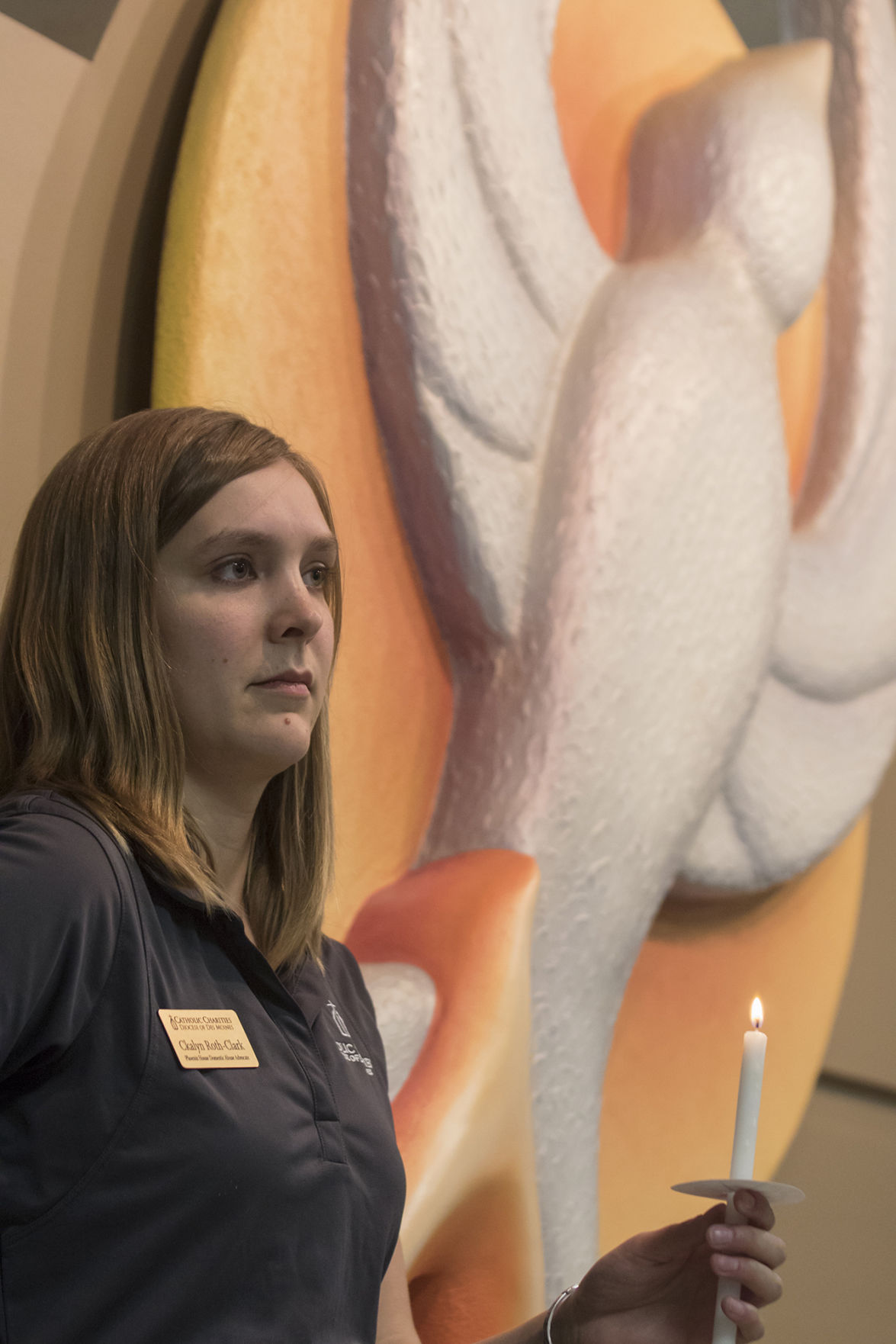 It was part of the organization’s candlelight vigil for Domestic Violence Awareness Month, which was attended by Phoenix House clients and staff, family members and friends. Since the weather pushed the event inside, only one candle was lit.

“We haven’t had a vigil for seven years, and it’s good to bring it back and remind people,” she said.

Half of the front hallway at Phoenix House was lined with 10 wooden figures – silent “witnesses” – each with a sign that told the story of a southwest Iowa person killed by an abuser. The other half had a string with hanging T-shirts that were painted by abuse victims as part of the shelter’s Clothesline project.

Heather Richardson of Elkhorn, Nebraska, told those gathered the gripping story of her abusive father and the toll he took on their family.

“My mom was beaten a lot when she was pregnant with all of us,” she said.

“My mom and dad were Mr. Perfect and Mrs. Perfect,” Richardson recalled. “She was the homecoming queen – the whole bit. We were picture-perfect.”

Then one day, Richardson’s sister, Holly, then only 3 years old, saw their father beating their mother, Ruby Durben. Her mom saw her, grabbed her and carried her into a bedroom, where she got out a revolver. Ruby sat there, holding her daughter in one arm and the gun in the other hand and waited for him to enter the room.

Still, Ruby stayed with that man until, after 10 years of sobriety, he started drinking again and was arrested for drunken driving.

Unfortunately, when Holly Durben was a young woman, she also became involved with a man who tried to give her everything she wanted – but then the abuse started.

Richardson, by this time an adult, tried repeatedly to talk her into leaving him, but she wouldn’t. Richardson moved out of state but kept in touch. Several times, after phone conversations with her sister, she was sure Holly was about to leave him – but she stayed, and the violence continued. Richardson finally gave up and stopped calling her.

Then, on July 18, 2009, Holly was found shot to death in the home shared with Brian Davis, with a gun in her left hand, Richardson said as she fought back tears. At first, police said it was a suicide – but Holly was right-handed. Heather talked to officials working on the case and told the medical examiner that she knew Holly hadn’t committed suicide. During his examination, the official found evidence of strangulation.

Five years after the murder, Davis was arrested. He was then convicted of first-degree murder and sentenced to life in prison – which was a huge relief for the family.

She advised people not to cut off family members who are being abuse –  as people are sometimes told to when a family member is using drugs so they will "hit bottom." That only helps the abuser convince the victim that no one cares about him or her.

“Have faith in judges, have faith in prosecutors,” Richardson told domestic violence victims at the event. “The (domestic violence) advocates that are able to hear these stories every day and have their hearts ripped out and come back and smile and hug are amazing.”

Richardson told the victims to paint their ring fingers purple.

After a moment of silence, one of the Phoenix House advocates read the poem, “Remember My Name,” by Kimberly A. Collins.

The young woman met a man she thought was “amazing.” After she had been involved with him for a while, she noticed he didn’t seem like himself.

The first time he hit her, he was as surprised as she was. He apologized and promised not to do it again. But the abuse got worse instead of better. She kept asking herself why she didn’t leave him, with no good answer.

“The only thing I would come up with was I wanted the old him back,” she said in her narrative.

Jennifer started blaming herself for his deterioration and eventually attempted suicide. After recovering from that, she finally left him.

“That was the best thing I ever did for myself,” she said. “I promise you won’t ever regret saving yourself.”

She realized then that it wasn’t her fault and, though he begged her to come back, she resisted.

Jennifer met Birchard when the prevention specialist was leading a “Safe Dates” class at Thomas Jefferson High School, where she was a student. She has since graduated and is now an advocate for domestic abuse victims.

Cassandra Chapman told how her partner took control of financial decisions and became abusive. She turned to drugs to mask her despair. She even used drugs while she was pregnant with her son and skipped getting prenatal care.

When she was jailed on a drug charge, it led to a turn-around for her.

After she was released, she left her abuser and sought help at Phoenix House. She achieved and maintained sobriety, and her son was born without drugs in his system.

“Without organizations like Phoenix House, I wouldn’t have made it,” she said.

Birchard teaches about domestic violence prevention in schools throughout most of southwest Iowa. Violence is common in relationships between teenagers, she said. She starts with a 10-week program on healthy relationships.

“A lot of kids don’t realize what is a toxic relationship,” she said. “To a lot of them, it’s like what happens at home.”

“Kiddos are more likely to go to another kid than to an adult,” she said.

Added McKee: “It also creates a culture where kids take care of each other, instead of being against each other.”

• In 2011, 6,628 domestic violence incidents were reported to Iowa law enforcement. Many others went unreported.

• In 2014, 13 Iowans were killed in domestic violence homicides. 54 percent of those murdered were killed with guns.

• On one day in 2014, Iowa domestic violence programs served 853 victims/survivors; another 133 were turned away due to lack of resources.

• An estimated 17.3 percent of Iowa women are stalked during their lifetimes.

• About 1 in 3 women and 1 in 4 men in the United States have experienced some form of physical violence by an intimate partner.

• On a typical day, domestic violence hotlines receive approximately 21,000 calls, an average of close to 15 calls every minute.

• Intimate partner violence accounts for 15 percent of all violent crime.

• The presence of a gun in the home during a domestic violence incident increases the risk of homicide by at least 500 percent.

• Seventy-two percent of all murder-suicides involve an intimate partner; 94 percent of the victims of these crimes are female.

As part of Domestic Violence Awareness Month, Catholic Charities Phoenix House is offering tips to area employers on how to help men or women …

Guests look at a display of "silent witnesses," which tell the stories of domestic abuse victims who were killed by their abusers during a Domestic Abuse Awareness Month event at Catholic Charities Phoenix House on Thursday, Oct. 6, 2016.