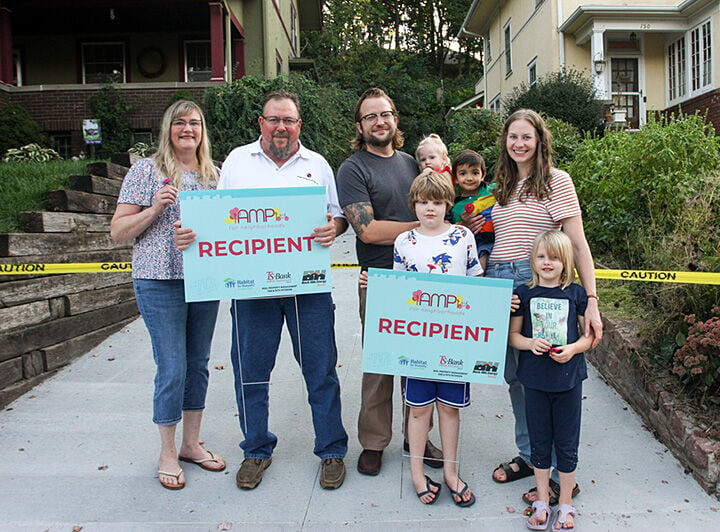 The Fullers and the Medeiros family stand on the newly repoured driveway they share, made possible by the AMP Program for Neighborhoods. 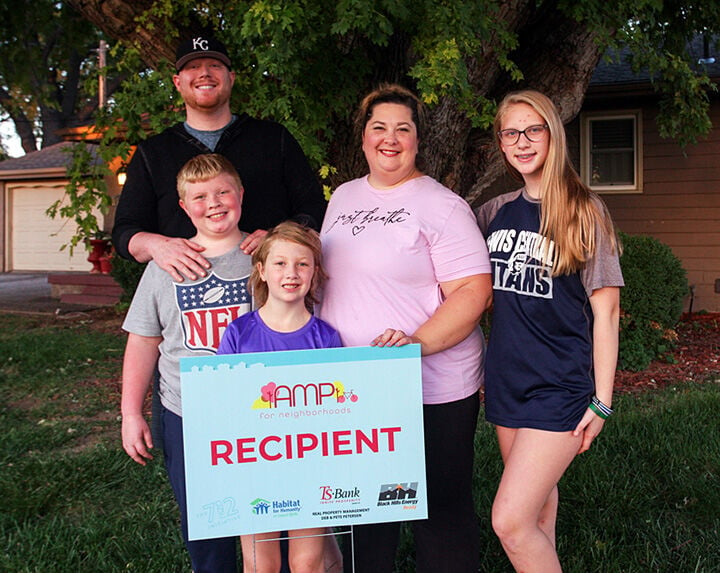 The Sewing family smiles after the completion of an AMP Program for Neighborhoods project repairing their privacy fence. 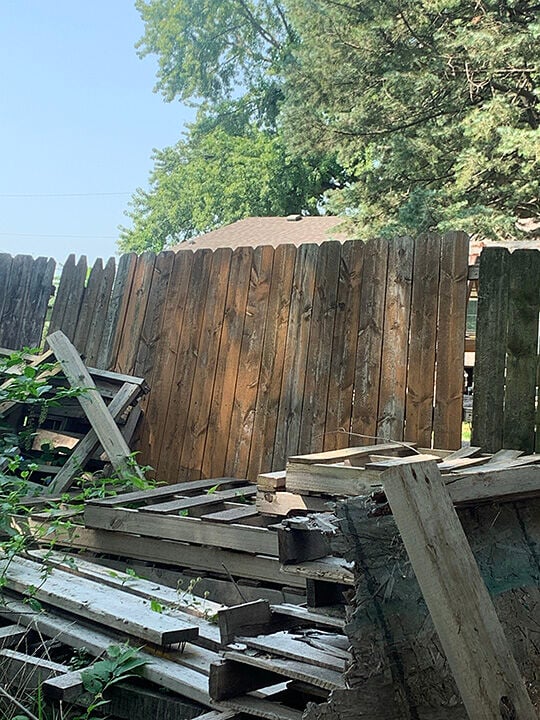 The Sewing family’s privacy fence was shaky after a storm earlier this year. It was redone by an army of volunteers as part of an AMP Program for Neighborhoods project. 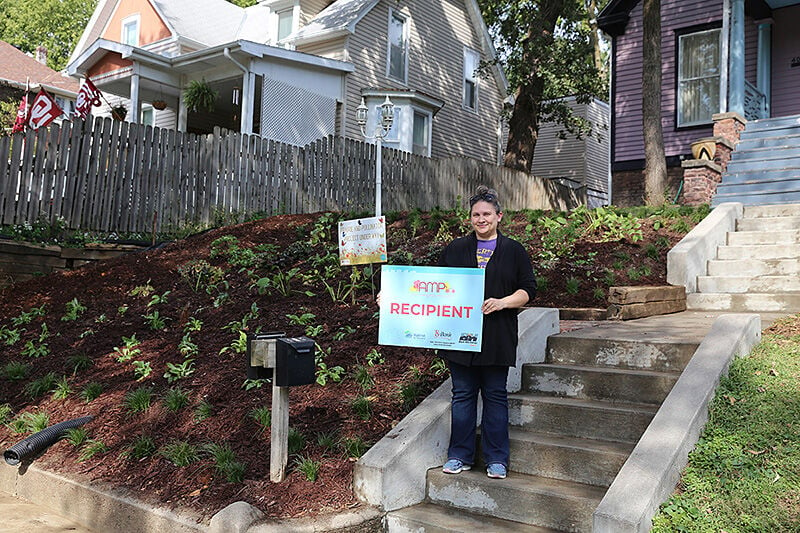 Angela Hartle stands next to her front yard, which was landscaped by West Pottawattamie County Master Gardeners as part of an AMP Program for Neighborhoods project.

The program was launched in June by TS Bank, The 712 Initiative and Habitat for Humanity of Council Bluffs to help homeowners and neighborhoods afford repair and improvement projects.

The partners expect to complete eight projects by the end of the year, with the remainder kicking off next spring, according to a press release from TS Bank. The rest of the $253,887 in funds will be used by the end of 2022 and will help a total of 31 homeowners.

So far, projects have included replacing a driveway, repairing a privacy fence and rejuvenating a woman’s lawn, among others.

Two neighbors who share a driveway – the Medeiros and Fuller families — submitted a joint request for new pavement because of water damage, the press release stated. A new driveway was poured, and an immediate need was met. The two families included a nurse and a respiratory therapist who have been working on the frontline during the pandemic.

“After the difficulties of the last two years, we are so thankful to have a smooth driveway for our home and a safe place for our kids to play,” homeowner Abby Medeiros said. “It’s a blessing we share the driveway with the best neighbors, but we were likely not to have funds at the same time to replace. The AMP program made this possible.”

The Sewing family, which has experienced multiple hardships in recent years, also appreciated the program. Matt and Meghan Sewing’s 7-year-old daughter was diagnosed with a rare medical condition. In 2019, she needed a bone marrow transplant, and her 12-year-old sister was an exact match, the press release stated. Working as a law enforcement officer and a kindergarten teacher and caring for their three children made outdoor repairs a low priority.

After a storm earlier this year, the family’s privacy fence was unstable and starting to rot. More than 75 volunteers from Lewis Central and Council Bluffs Schools, Nebraska Methodist Nursing, Kansas University engineering, Principal Choice Solutions, TS Bank and The 712 Initiative teamed up to replace 40 fence posts and 600 wooden pickets.

“Our family is beyond grateful for this experience,” homeowner Meghan Sewing said. “We have been blown away by everyone who has given of their time and talent to work on our fence. We will be reminded of this blessing every time we are outside enjoying the beautiful yard and fence. Thank you!”

Angela Hartle, a single homeowner, worked very hard on her home and yard to keep it looking great, the press release stated. A neighbor noticed and nominated her for AMP funding. With the help of the West Pottawattamie County Master Gardeners and TS Bank employees, her front yard was transformed, and her property now has even more curb appeal on her historic street.

“The program was amazing, and all the volunteers were great,” Hartle said. “I am so grateful for all the work they did.”

The AMP program started with $5,000 donated by TS Bank, The 712 Initiative, Black Hills Energy and Real Property Management — Deb and Pete Petersen. After it was announced, the program received an anonymous gift of $100,000. As the program gained momentum, the Council Bluffs Housing Trust Fund donated $24,887, and the anonymous donor provided an additional $100,000, bringing the grand total to $253,887.

“The generosity of this anonymous donor and the love for Council Bluffs is simply incredible,” said Sheryl Garst, CEO of The 712 Initiative. “The households nominated by their neighbors are hardworking individuals and families who simply did not have the disposable income for these types of projects.”

According to a recent housing study conducted by the Sherwood Foundation, 40% of families do not have $400 to cover an emergency, the press release stated.

Local residents were encouraged to nominate themselves or a neighbor who needed help with an outdoor project. More than 50 applications were submitted requesting assistance with landscaping, siding, painting, fence repair, driveways, sidewalks, windows, roofing and exterior doors in time for the Aug. 15 deadline.

Initially, the plan was to award selected projects up to $5,000, according to Kelsey Stupfell, director of public relations for TS Bank. With the generous donations that were received, the cap was raised, and projects ranging from $2,000 to $15,000 were funded, she said.

U.S. Sen. Chuck Grassley, R-Iowa, on Wednesday reiterated his supports for term limits for members of Congress as he marked 63 consecutive yea…

The newest member of the Nebraska State Board of Education described himself as a "conservative first, Republican second" who wants to restore local control to public school districts.

The Fullers and the Medeiros family stand on the newly repoured driveway they share, made possible by the AMP Program for Neighborhoods.

The Sewing family smiles after the completion of an AMP Program for Neighborhoods project repairing their privacy fence.

The Sewing family’s privacy fence was shaky after a storm earlier this year. It was redone by an army of volunteers as part of an AMP Program for Neighborhoods project.

Angela Hartle stands next to her front yard, which was landscaped by West Pottawattamie County Master Gardeners as part of an AMP Program for Neighborhoods project.