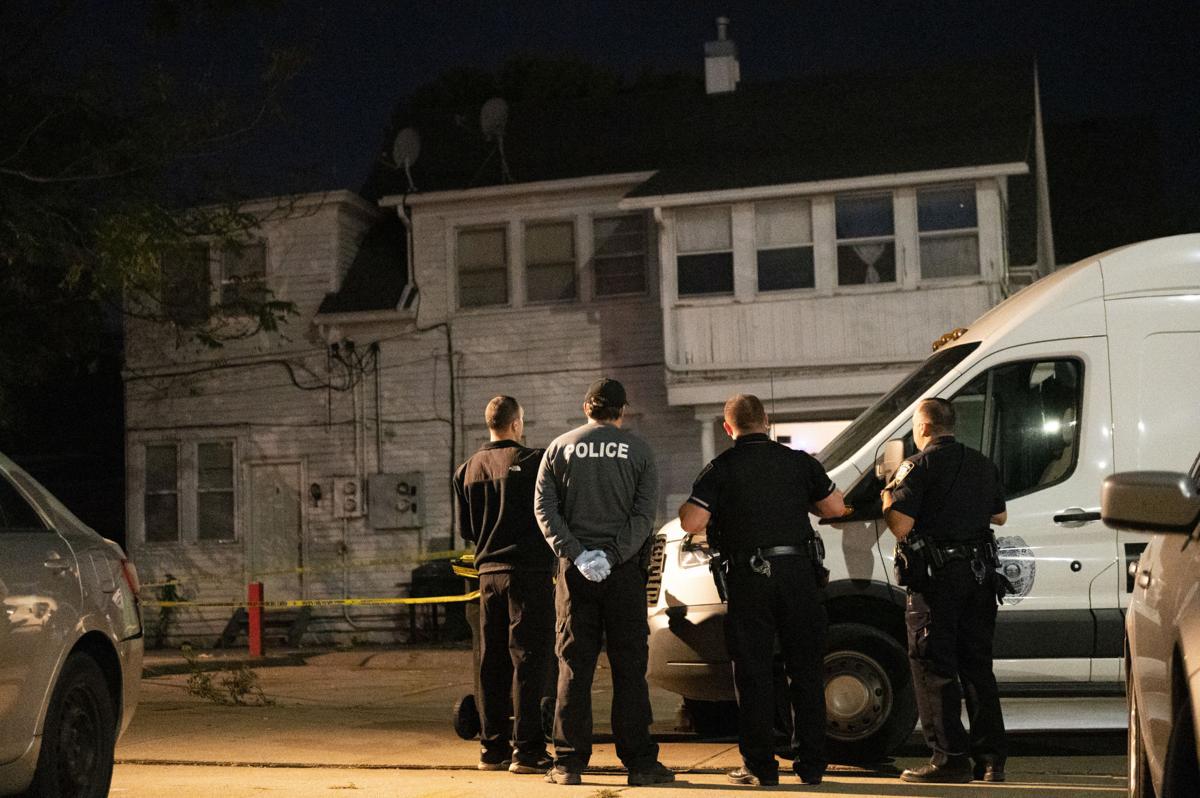 Lincoln police officers stand behind a van Monday night near 26th and Vine streets where police say a man was killed earlier in the day during a fight. 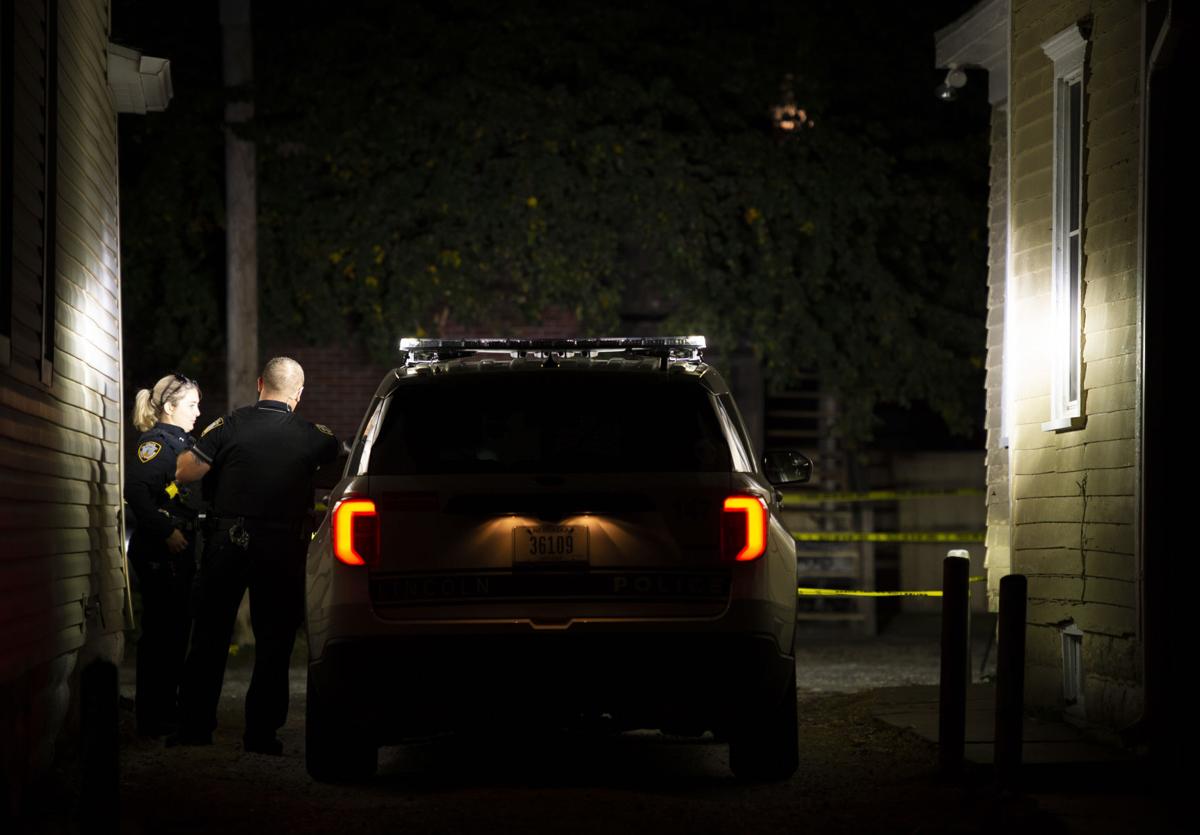 Police stand between two houses near the scene of a homicide on Monday at 26th and Vine streets.

A 50-year-old Lincoln parolee is in custody after a deadly fight near North 26th and Vine streets Monday afternoon.

Police say Brian Adams Sr. assaulted the 29-year-old victim with a large pole during a mutual fight in the middle of the day a block from one of the busiest intersections in town.

Adams was arrested on suspicion of second-degree murder and use of a weapon to commit a felony, Jason Stille, assistant chief of operations at the Lincoln Police Department, said at a news conference Tuesday morning.

Stille declined to provide the name of the man who died until family are notified.

He said Adams was quickly developed as a suspect and arrested at a home in southwest Lincoln a few hours after the fight. He is being treated at a hospital for injuries suspected to have been from the fight and will be jailed when he is released.

Stille said a 911 call at 3:08 p.m. sent police and Lincoln Fire and Rescue to the home where a fight outside in a driveway had left the younger man injured.

When police arrived 3 minutes later, people on the scene were performing CPR. The victim was taken to the hospital, but died around 4 p.m.

"Members of our criminal investigations team and uniformed street personnel worked immediately to secure the scene and began investigating the details surrounding the incident," Stille said.

He said there were witnesses to the fight and there could be others who police want to interview.

Stille said he did not know if the men knew one another or what the fight was about. He also didn't answer whether either of the two lived at the home.

According to prison records, Adams had just been released on parole July 30 from a six- to 10-year sentence for second-degree assault for hitting a woman in the head twice with a combination lock at 37th Street and Baldwin Avenue in 2018.

Monday's is the sixth known suspected killing in Lincoln this year.

The first, 33-year-old James Shekie, was found dead in March. Deontae Rush, 25, of Omaha, has been charged with first-degree murder for allegedly killing Shekie during a robbery.

Investigators found Carly Schaaf's remains near Pawnee Lake on June 12. The 23-year-old Lincoln woman's death was officially ruled a homicide when her death certificate emerged Oct. 7. No arrests have been announced in Schaaf's death.

Deontae Abron, 31, died in June, days after he was shot in the face at a party that devolved into a fight. Shantrel A. Hickey has been charged with second-degree murder in Abron's death.

Janet Kotopka, a 78-year-old woman suffering from Alzheimer's, was shot five days after Abron was killed. She later died at an area hospital. Her husband, John Kotopka, was charged with first-degree murder.

Alonzo Jones, 28, was shot and killed at a Lincoln apartment complex in September. Lendell Harris, 23, turned himself in to authorities at the Lancaster County Jail in the immediate aftermath of the shooting and was later charged with manslaughter in Jones' death.

Getting away with murder: Nebraska cold cases

An investigation by the Pawnee County Sheriff's Office has concluded that a 23-year-old Weeping Water man was accidentally killed Saturday by a deer hunting partner's bullet.

A former Iowa State Patrol Trooper was indicted by a federal jury on Nov. 4 for attacking a motorcyclist in 2017.

Chief Deputy Ben Houchin declined to say how or how long the nurse went about delivering narcotics: "We don't want other people to learn and try to do the exact same things. They're talented enough without us helping them."

IOWA CITY — A “loophole in the law” that local authorities hope to close has prevented the Johnson County Attorney’s Office from pressing serious charges against the man identified as shooting a projectile into the head of a passing Marine and badly injuring him.

Candice Wooster, a Lincoln defense attorney, said attorneys are curious how the county attorney is deciding which cases are being dismissed. "And I think we are, as a community, trying to figure that out.”

UPDATE: One dead in officer-involved shooting in Waterloo

Police said the 42-year-old man was shot when he rammed an occupied squad car following a vehicle chase around 3:30a.m.

Bailey Boswell will not be the first woman in Nebraska to receive a death sentence. A three-judge panel sentenced her to life in prison without parole for the 2017 murder and dismemberment of Lincoln woman Sydney Loofe.

"The phone calls include Ms. Idigima and Mr. Weaver discussing the case, witnesses and video evidence of their pending charges," according to the petition for action on conditions of pretrial release.

LPD still isn't sure why the men were in Lincoln, nor does the department have a description of another vehicle that may have been involved in the shooting. "We need the public's help," Assistant Police Chief Jason Stille said.

Lincoln police officers stand behind a van Monday night near 26th and Vine streets where police say a man was killed earlier in the day during a fight.

Police stand between two houses near the scene of a homicide on Monday at 26th and Vine streets.