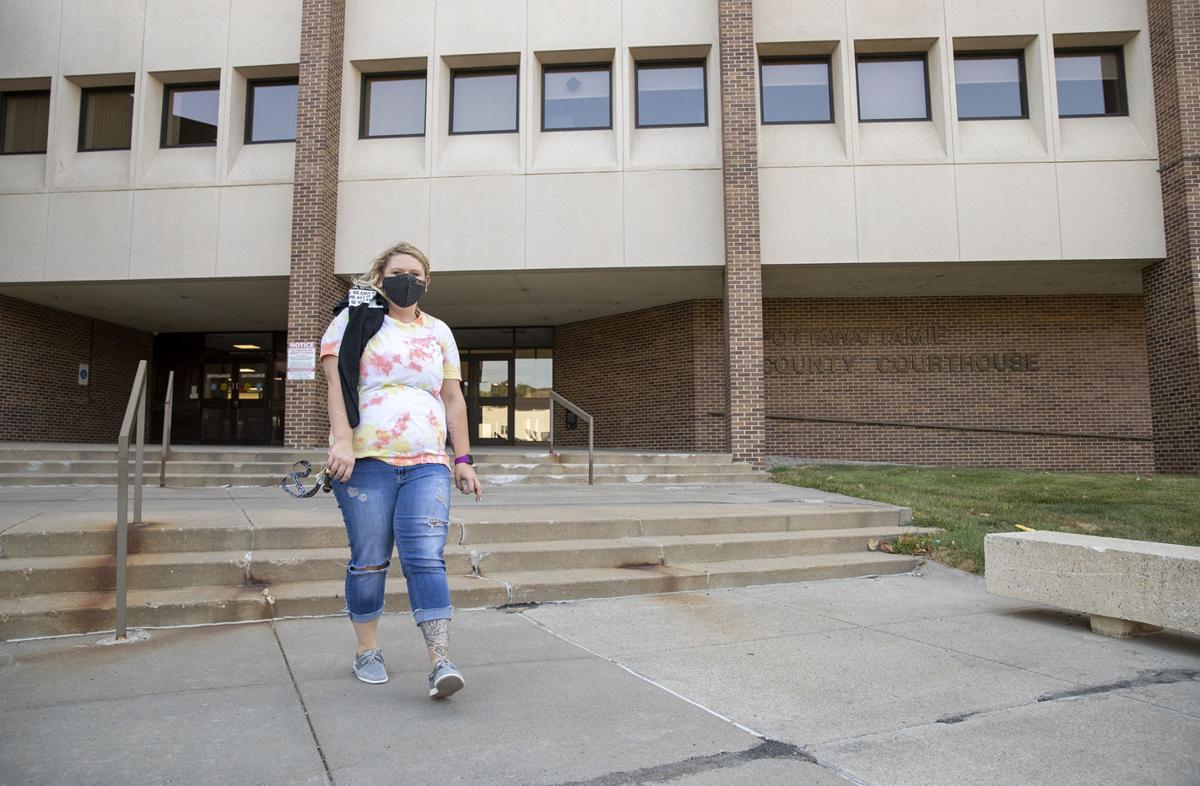 Krysta Carlson, daughter of the late Steven Carlson, walks away from the Pottawattamie County Courthouse on Friday. Police and prosecutors say her dad was a victim of an alleged crime spree by Troy Petersen of Essex and April Montello-Roberts of Shenandoah in August 2019 that left 51-year-old Carlson and 52-year-old Jerrot Clark dead. Montello-Roberts’ trial is set to begin on Sept. 14. 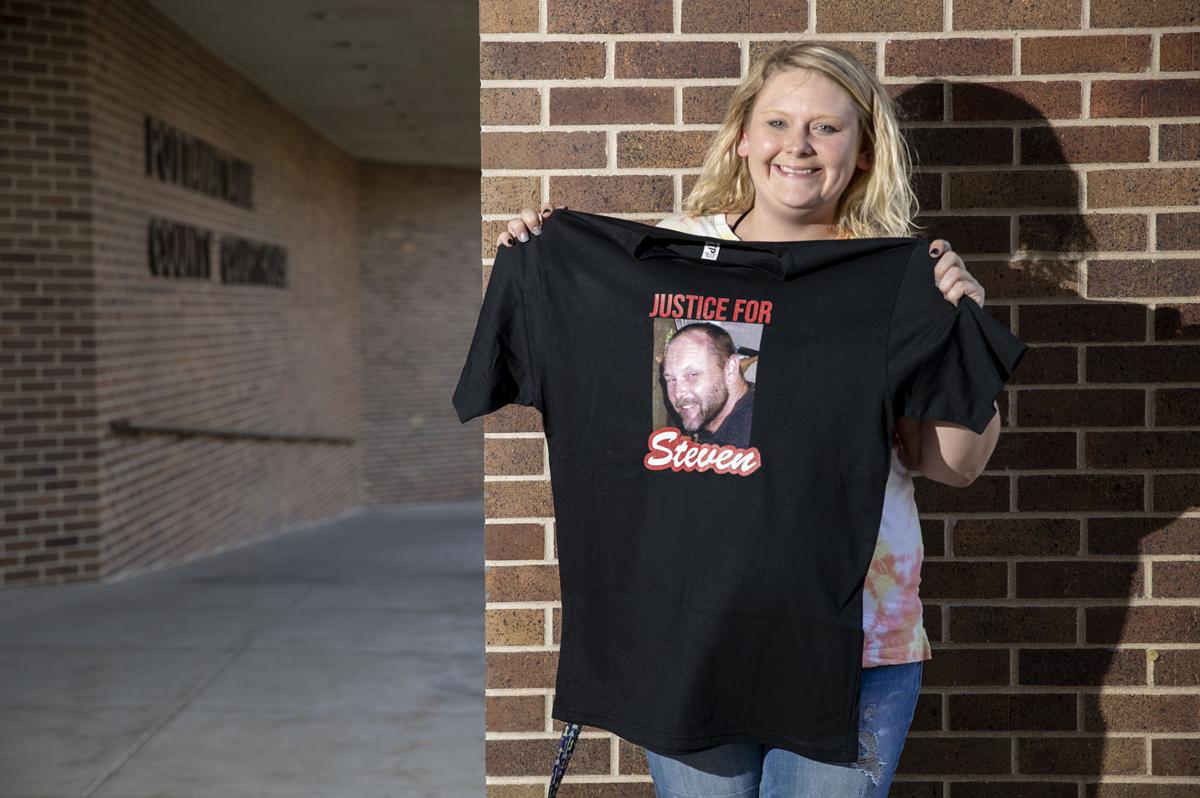 Krysta Carlson, daughter of the late Steven Carlson, poses for a portrait outside the Pottawattamie County Courthouse holding a T-shirt honoring her father on Friday.

All the firsts have passed for Krysta Carlson since her father, Steven Carlson, died in August of 2019.

The first anniversary of his death. The first Christmas without him. His first birthday since his death.

“Every first has come and passed. They were rough,” Krysta Carlson said. “The death anniversary was probably the worst one. And around Christmastime. Usually you hang out with your family, when there’s somebody missing because they’re gone, it’s depressing.”

Steven Carlson was found dead on Aug. 7, 2019, at his Yellow Pole Road home in Council Bluffs. Police and prosecutors say he was a victim of an alleged crime spree by Troy Petersen of Essex and April Montello-Roberts of Shenandoah that left 51-year-old Carlson and 52-year-old Jerrot Clark dead.

Montello-Roberts has pleaded not guilty. Her trial is set to begin on Sept. 14. It will be the first jury trial in Pottawattamie County since early March, when the COVID-19 pandemic reached the area, according to County Attorney Matt Wilber. Jury selection will be held at the Mid-America Center to allow for social distancing, with opening arguments set to begin on Sept. 15.

Krysta Carlson is selling T-shirts honoring her father now through the trial, with proceeds going to the Family Crisis Centers Western Iowa Survivors of Homicide and Other Violent Crimes unit, which serves 29 counties, including Pottawattamie County and other southwest Iowa counties.

“They helped me when my dad passed away,” Krysta Carlson said of the organization. “It’s going to be a really rough week for me. The thing that’ll make it easier is being able to help others. I’m trying to make something positive of it. It’s a negative thing in general, obviously, but I feel like my dad would want something positive to come out of this.”

“Positive” is the word Carlson uses most when describing her father.

Steven Carlson worked as a semi-truck driver for more than 20 years, his daughter said. He had two children, Krysta and Nick, along with a granddaughter. He enjoyed riding four-wheelers and tractors. Friends called him “Carly.”

“He was a good guy,” Krysta Carlson said.

“He beat cancer. He was shocked that he even got through that,” Krysta Carlson said. “When you get told that your dad has cancer, when he tells you that, the thought goes through your head, ‘OK, I could lose my dad to cancer.’ But the thought never runs through your mind, three months after he’s cancer free ... It’s devastating.”

The alleged crime spree by Petersen and Montello-Roberts began on Aug. 4, 2019. Police records allege the pair robbed and killed Clark that day.

According to police reports, on Aug. 7, 2019, Montello-Roberts was driving a green 1997 Dodge Ram pickup truck near County Road L34 and Juniper Road when a Pottawattamie County Sheriff’s Office deputy attempted to stop the vehicle for suspicious activity and minor traffic violations. The truck’s headlights were off, and it failed to stop at a stop sign.

With the deputy in pursuit, according to an affidavit, the passenger, Petersen, 28, began firing shots at the deputy. The deputy said he saw “numerous” muzzle flashes and heard “crackling sounds” on both sides of his police vehicle. He eventually lost sight of the pickup.

About 25 minutes later, Council Bluffs police officers were on patrol, searching for the suspect vehicle when an officer spotted it on Railroad Highway headed toward Highway 6 in Council Bluffs and gave chase. Petersen opened fire again, shooting at the officer several times, a police affidavit said. The officer’s cruiser was hit at least three times, as bullet casings were recovered from the radiator and skid plate.

The truck crashed in the 1400 block of Indian Hills Road. A roughly two-hour standoff ensued, with Petersen reportedly pointing the rifle at responding officers and Montello-Roberts. An officer with the police Emergency Services Team fired one shot at Petersen, killing him, according to police records. An investigation led law enforcement to determine Montello-Roberts was not a victim of Petersen, but an alleged accomplice. A message left with Montello-Roberts’ attorney was not immediately returned Tuesday.

Police said in the time between evading the sheriff’s deputy and being spotted by the police officer, Montello-Roberts and Petersen broke into Steven Carlson’s home after Petersen shot Carlson through a window.

“I remember being in complete shock,” Krysta Carlson said of hearing the news that day. “I tried to go back to work. My boss was like, ‘No, you need to go.’ That’s when stuff started really hitting me. I was crying, I wanted to see my dad. I couldn’t see my dad.“You don’t think someone’s going to randomly call you and tell you that while you’re at work on a Wednesday.”

The weeks and months that followed were a blur. Carlson said she had no sense of time.

“Tunnel vision. I couldn’t see anything,” she said. “I tried to call my dad a lot of times during that time, on his phone, expecting him to answer. I tried to text him, Facebook him.”

That feeling lingered. Carlson said she was depressed, viewed the world through a negative lens.

“It took me a long time to get into a positive mind frame,” she said. “It’s almost like my dad was like smacking me, telling me to get out of it.”

That’s when the idea for the T-shirts came to her. To order a shirt, send an email to JusticeforStevenCarlson@gmail.com.

“This idea came from nowhere,” she said, thanking her father for having the confidence to come forward, put herself out there. “It’s not easy. I can tell you that.”

— This report includes information from the Nonpareil archive.

A Shenandoah woman charged in connection to a crime spree that left two dead has taken a plea deal.

Krysta Carlson, daughter of the late Steven Carlson, walks away from the Pottawattamie County Courthouse on Friday. Police and prosecutors say her dad was a victim of an alleged crime spree by Troy Petersen of Essex and April Montello-Roberts of Shenandoah in August 2019 that left 51-year-old Carlson and 52-year-old Jerrot Clark dead. Montello-Roberts’ trial is set to begin on Sept. 14.

Krysta Carlson, daughter of the late Steven Carlson, poses for a portrait outside the Pottawattamie County Courthouse holding a T-shirt honoring her father on Friday. 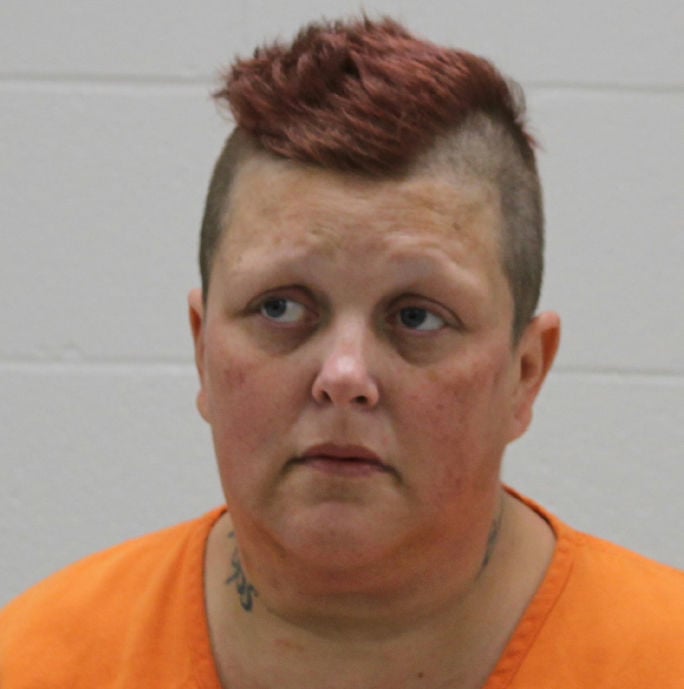