All members of Congress and candidates are required to file financial reports detailing earned income and assets, including bank, retirement and brokerage accounts and investment properties as a matter of transparency to disclose potential conflicts of interest.

Miller-Meeks, in her initial two-page report filed in August, did not list any assets or liabilities, including assets she previously disclosed in 2019 as a candidate. That includes her state pension, a money market fund, retirement account, stocks and income from Great River Health Systems she listed in 2019.

"Where did the money come from?”" IDP Chairman Ross Wilburn said at the time.

The only financial information listed on the initial 2020 report was Miller-Meeks' $100,000 salary as a member of Congress (although she didn’t start that job until January 2021) and a deferred compensation payout from Great River Health System in Burlington, where Miller-Meeks worked as an ophthalmologist before being elected to Congress. The initial report did not list the amount of the payout, only that the compensation exceeded $5,000.

It’s possible Miller-Meeks intended the $100,000 reported in earned income for 2020 to represent the share of her $174,000 congressional salary she'd been paid through Aug. 13, when the report was filed.

Miller-Meeks also did not list her $25,000 annual salary and per diem from the Iowa Senate, where she served from January 2019 to January 2021.

A spokesman for Miller-Meeks in September said she did not have any outside income, including from IRAs or 401(k)s, that she would be required to report on the form.

"The Congresswoman said she divested of those assets (stocks, etc.) before she became a (House) Member," spokesman Will Kiley responded in an email at the time. "The income reported includes 2021 congressional pay, and the Congresswoman is already working with the House to ensure the filing is complete."

Asked in a follow up email whether that meant Miller-Meeks did not receive any income, salary or benefits from Great River Health Systems nor a state pension in 2020, Kiley replied: "That is my understanding!" 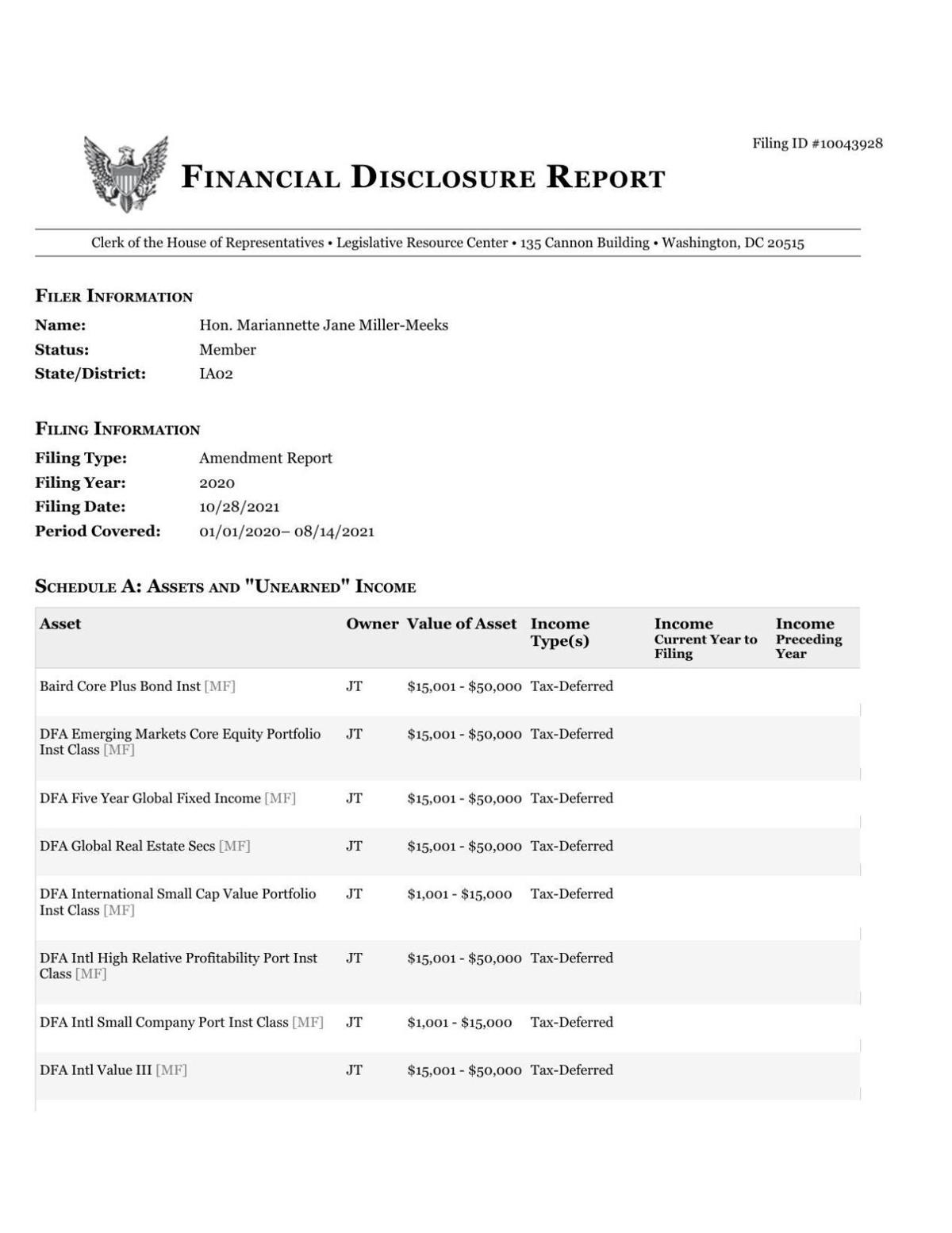 Asked why the congresswoman claimed not to have income that she has subsequently reported, Kiley responded in an email, "There was a simple misunderstanding with regards to what was required to be disclosed."

"Once we were made aware of the issue the Congresswoman began working with the House Ethics Committee to fix it," he wrote. "The funds from the Great River Health System are related to salary incurred for 2019 work that was paid out in 2020."

Miller-Meeks reported earned income both for "current year to filing" and "preceding year," which would encompass 2021 and 2020, respectively. However, because she's a new member of Congress, Miller-Meeks was only required to fill out the "preceding year" for reporting earned income, with information from 2020, while marking "current year" as "N/A."

Kiley did not respond to emailed questions asking to clarify for which years Miller-Meeks was reporting earned income. For example, she listed nearly $210,000 in salary from her Great River Health System for the "preceding year" and nearly $54,000 in salary from her previous employer for the "current year." She also listed receiving her $31,000 annual Iowa Senate salary for the "current year," despite resigning the seat to join Congress in January of this year.

All told, Miller-Meeks appeared to receive more than $31,000 in qualified outside income in 2021, which would violate a House ethics rules prohibiting members of Congress from earning outside income above a set threshold. For the 2021 calendar year, the income cap for members is $29,595.

Wilburn, in an emailed statement, said Miller-Meeks "failure to comply with transparency measures required of every Member of Congress confirm that she simply does not deserve Iowans’ trust."

Wilburn, too, said Miller-Meeks' amended disclosure report raises "more questions than answers on why Miller-Meeks lied to Iowans and what she has to hide."

The nonpartisan Campaign Legal Center in September raised questions about the financial disclosures of seven congressional members, including Rep. Cindy Axne, a Democrat representing Iowa’s 3rd District. The center said Axne did not report more than 40 transactions with a potential financial range of $43,000 to $645,000, The Cedar Rapids Gazette reported.

Photos: Congresswoman Mariannette Miller-Meeks announces her intention to run for reelection in District 1