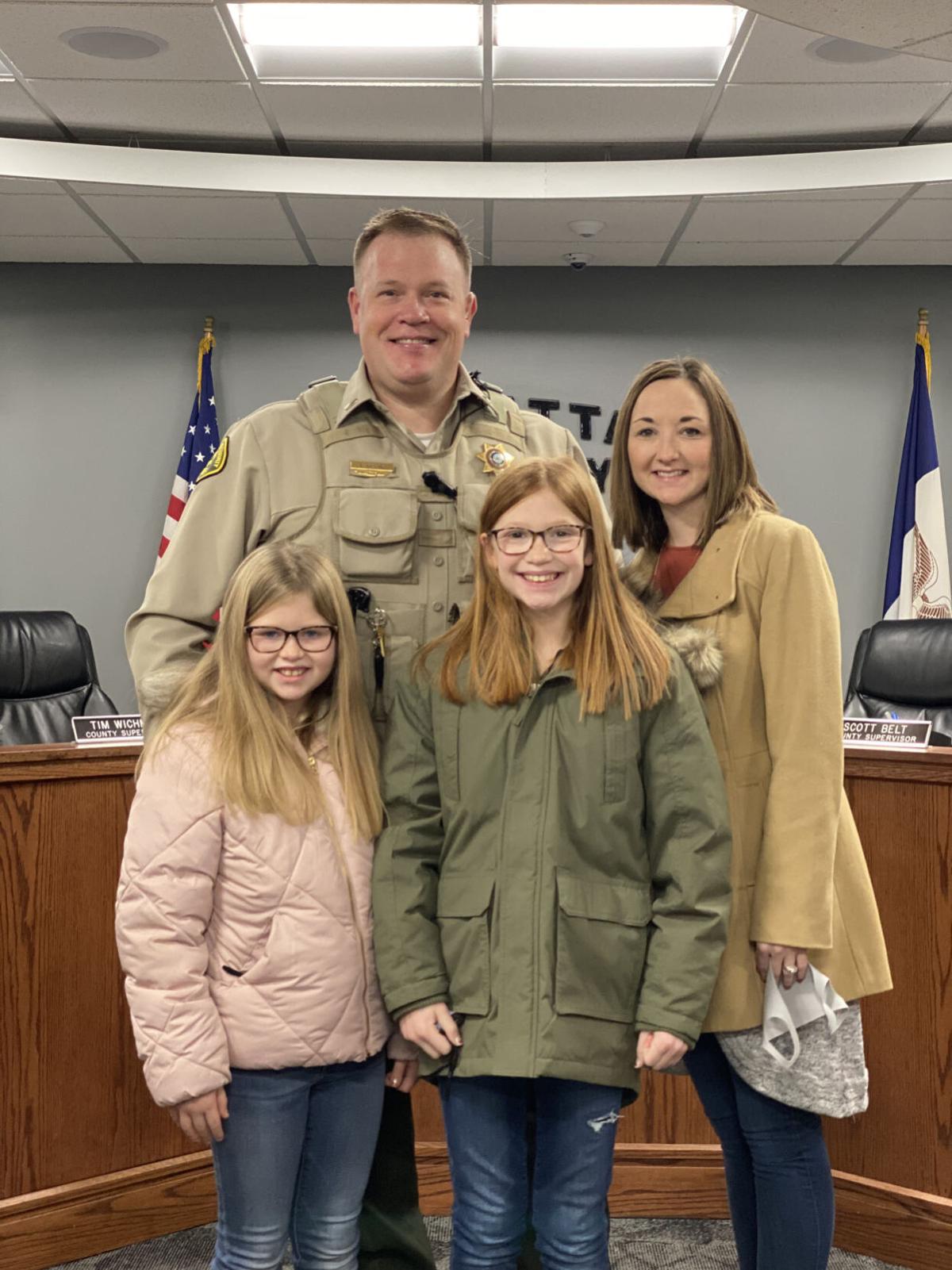 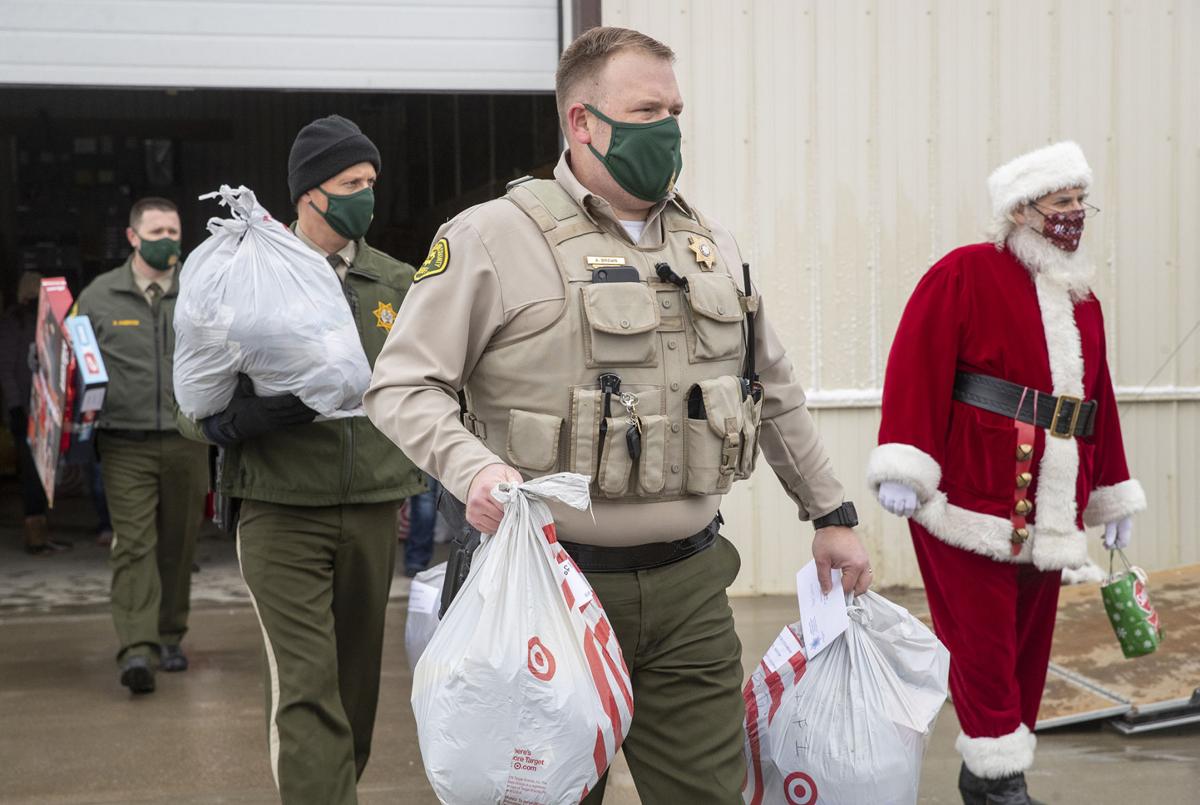 Sheriff Andy Brown, center, and other members of the Pottawattamie County Sheriff’s Office load Christmas gifts and other items into vehicles during the annual Shop with the Sheriff event on Dec. 12, 2020. 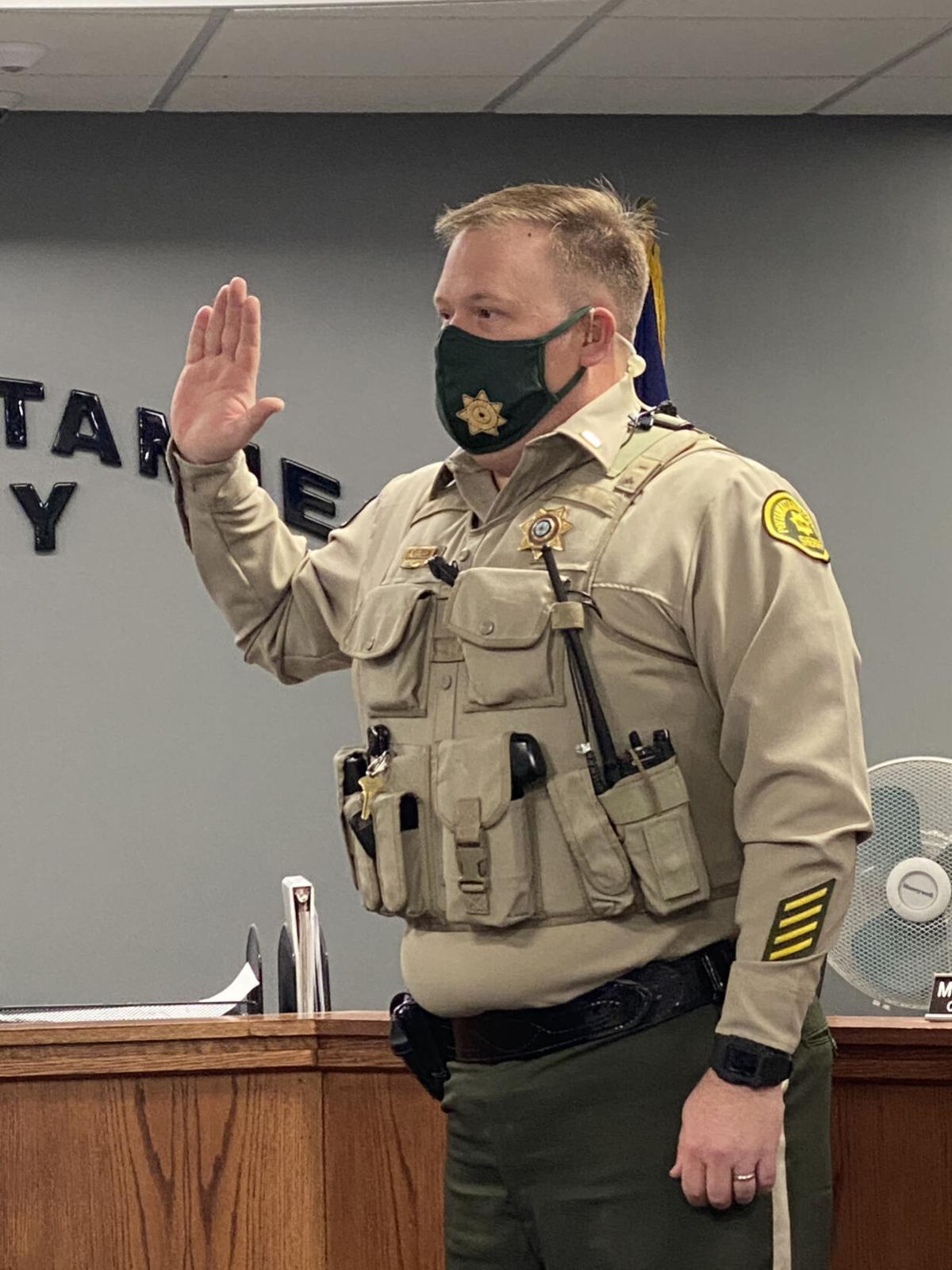 Pottawattamie County Sheriff Andy Brown is sworn in on Dec. 31, 2020.

“I said during the campaign I’ll hit the ground running,” Brown said Tuesday in between meetings.

Brown replaced now-former Sheriff Jeff Danker, who retired after 28 years as sheriff and more than 40 years with the Pottawattamie County Sheriff’s Office.

Brown was sworn in by Judge Maggie Popp Reyes on Dec. 31, 2020, and during a formal ceremony on Monday by Judge Kathleen Kilnoski. County officials determined the Dec. 31 swearing in was necessary because it was Danker’s last day and they wanted to make sure the county wasn’t sheriff-less over the holiday weekend.

Brown said part of hitting the ground running is outreach to communities in the county, along with other stakeholders. He mentioned attending city council, school board and fire department meetings throughout Pottawattamie County.

“Get an idea of what’s going on in these towns,” he said, noting discussing topics to work toward stopping activity “before it turns criminal.”

As an example of that “activity,” he noted potential cases of residents acting erratically and abnormally-high traffic to certain homes/neighborhoods, among other possibilities.

“Rather than go to taxpayers for (jail) expansion, I want to go to the mental health system to see what we can do. The majority of inmates have mental health issues,” Brown said. “I’d like to work on a different program instead of incarceration that would be better for our population.”

Brown also mentioned looking to work with school boards and districts in the county to gauge interest in a school resource officer program.

As previously reported in the Nonpareil, Brown grew up in Harlan, graduating from Harlan High School before spending time at Iowa Lakes and Iowa Western Community Colleges. He joined the sheriff’s office in the jail division in 1999 and became a full-time deputy in 2003.

He was promoted to corporal in 2006 and promoted to sergeant in 2009, before becoming a lieutenant in 2015.

Brown has spent much of his career training colleagues, including instituting the office’s stun gun program. He also helped bring a pursuit intervention technique program to the office, procuring a vehicle for use in training deputies to use the PIT maneuver to disable vehicles during pursuits.

Brown said among the accomplishments he’s most proud of is helping bring security to the Pottawattamie County Courthouse. He created the proposal for courthouse security, working with the county Board of Supervisors to get the plan approved.

Brown helped guide implementation of the security infrastructure and oversees security of the courthouse campus.

Brown lives in Underwood with his wife Kari, a dental assistant at Tooth Emporium, and their daughters Kennady, 12, and Kinsley, 8. Andy Brown’s community involvement includes membership in the Council Bluffs Noon Rotary, Underwood Lutheran Church and the Iowa State Sheriffs and Deputies Association.

Brown won a three-candidate Republican primary in June before running unopposed in the November election.

The U.S. attorney for the Southern District of Iowa is resigning.

The U.S. attorney for the Southern District of Iowa is resigning.

Sheriff Andy Brown, center, and other members of the Pottawattamie County Sheriff’s Office load Christmas gifts and other items into vehicles during the annual Shop with the Sheriff event on Dec. 12, 2020.

Pottawattamie County Sheriff Andy Brown is sworn in on Dec. 31, 2020.