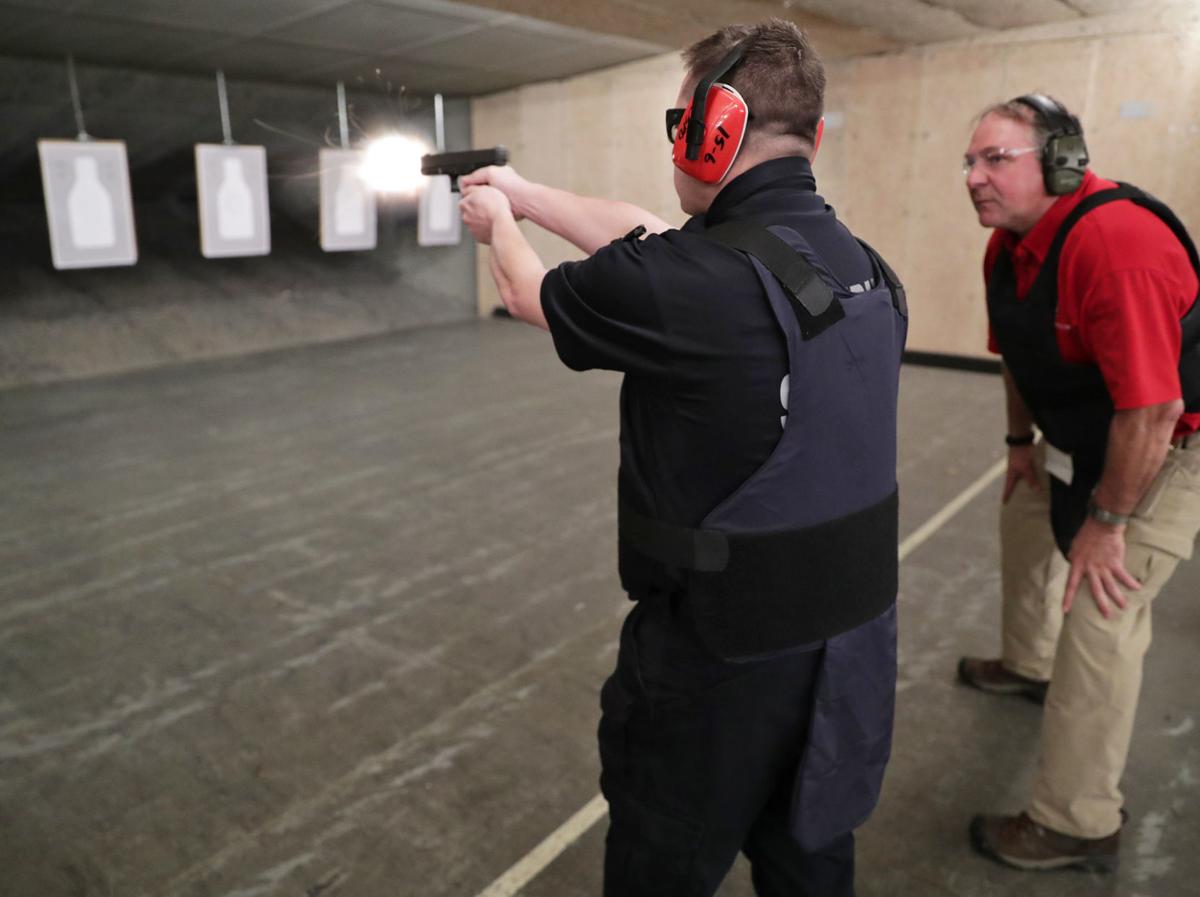 A man shoots a pistol during live-fire shooting practice at the Southwest Iowa Law Enforcement Training Facility during a session of the Council Bluffs Police Department Citizen’s Police Academy on Thursday, March 8, 2018. Council Bluffs and Pottawattamie County officials are working to build a new 100-yard outdoor range at the facility. 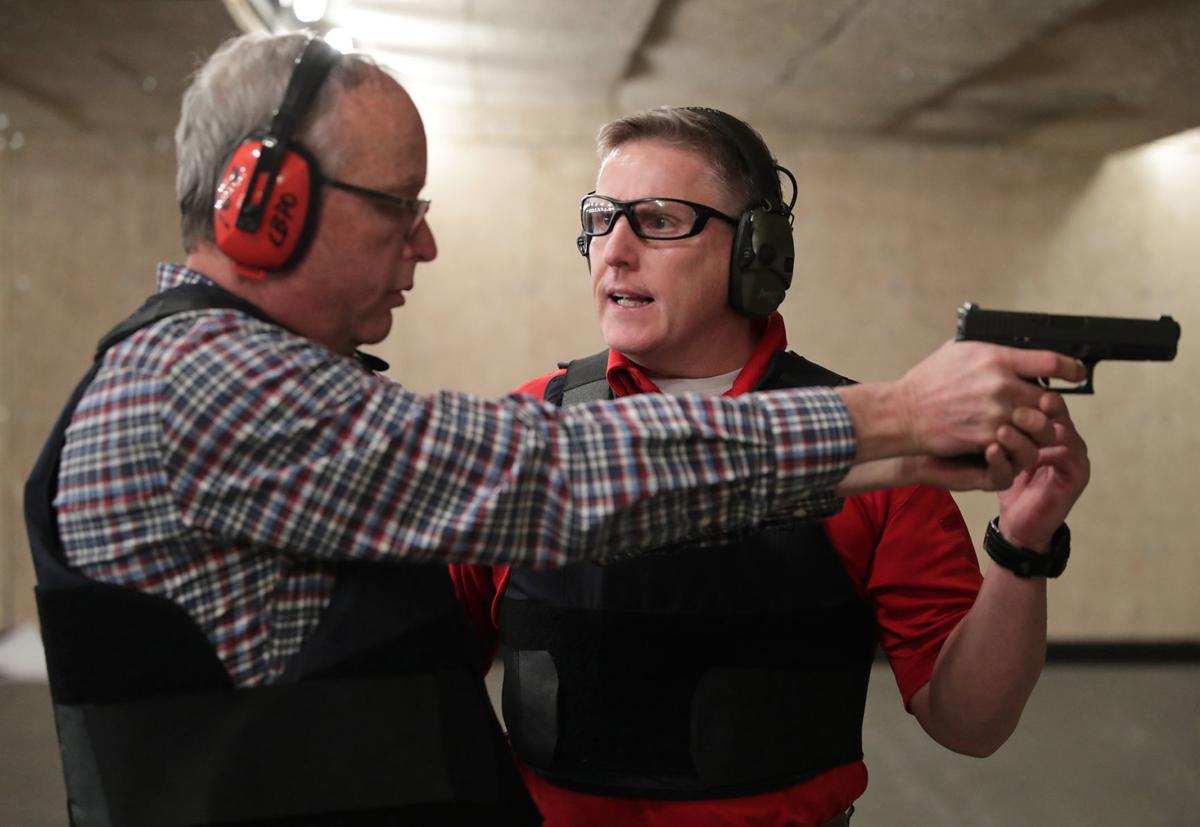 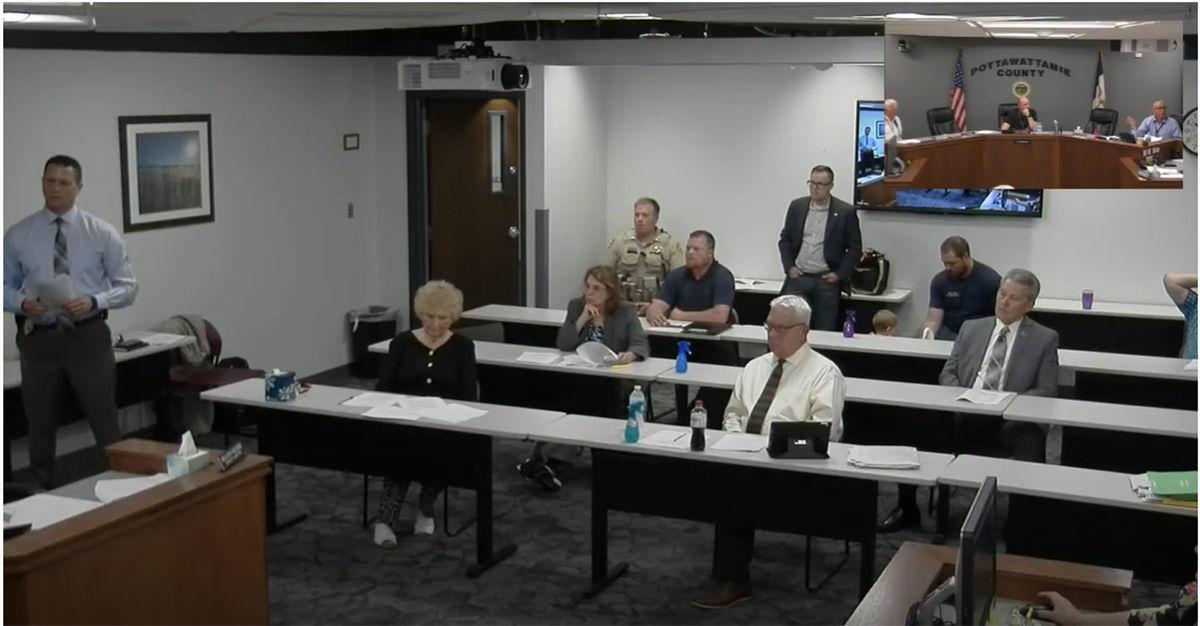 Pottawattamie County and Council Bluffs have taken the first steps toward an expansion of the Southwest Iowa Law Enforcement Training Facility south of the city.

During the county Board of Supervisors meeting Tuesday, Council Bluffs Police Chief Tim Carmody discussed the installation of a 100-yard outdoor shooting range at the facility, a joint venture between the two governments.

“It’s a great partnership, I want to continue that,” Carmody said.

Pottawattamie County Sheriff Jeff Danker said the 100-yard range will benefit his department, and mentioned requirements from the state on rifle proficiency that require shooting from that distance.

The training facility opened in 2006.

The board voted unanimously Tuesday to approve an updated 28E agreement between the county and city that included a provision that requires board and Council Bluffs City Council approval of capital improvement expenditures that exceed $10,000. Carmody said those expenditures would be discussed and approved during the body’s respective budgeting processes. The update also includes additional language and guidance should either party decide to dissolve the agreement.

The Council Bluffs City Council will vote on the agreement at its July 13 meeting, with Mayor Matt Walsh then signing the accord if the council approves it.

During the county board meeting, Supervisor Tim Wichman noted the need to ensure the agreement is written as such that when or if a dissolution occurs, a protracted legal battle doesn’t occur, citing the fallout when the Council Bluffs Police Department left space at the Pottawattamie County Courthouse. Language in the sharing agreement regarding the law enforcement center — built in the late 1970s — at the courthouse led to a dispute over compensation between the county and city.

“There was language in that agreement that really came back to cause an issue with the city and county,” Wichman said.

Carmody said the two sides were cognizant of the need for clarity. The agreement included work with Leann Gifford of the Pottawattamie County Attorney’s Office.

“It’s a partnership. Your point about the building at the courthouse is a great example. I have worked so hard in my career here to make sure we have guidance and clear understanding, so when I leave this chair, the next person that sits down is in a better place and has that guidance available,” Carmody told Wichman.

“That’s what I want, too,” Wichman said.

Wichman said he wanted the updated agreement to include the cost of the new firing range. Supervisor Scott Belt said, “I don’t think the document’s that static. I think over time, things change and we have to adapt that.”

Belt noted the provision about both parties having to agree to capital expenditures above $10,000.

“I want to make sure we have everything in the document covered, so we don’t end up where we were,” Wichman said, referring to the law enforcement center debate.

“It’s a timely comment,” Council Bluffs City Councilman Hannan said at the board meeting. “Thanks to Leann’s help and the City Attorney’s Office, I think we addressed the actual termination. If for whatever reason (one side wants to leave the agreement), I think it’s fairly determined. I think that was something important to all of us.”

Carmody said the sides would work to put out a request for proposals to start the bidding process on construction. When bids come in, the City Council and Board of Supervisors will vote on approval.

Supervisor Justin Schultz said he anticipates the county will use gaming or general funds to cover the cost.

“It just depends on where (the price) lands,” he told the Nonpareil about what exact fund or funds would be used. “We will make a decision when we get those bids.”

Carmody said the goal is to complete the expansion the next fiscal year because of general obligation bond funds that have to be spent in that timeframe. Hannan said the project is part of the city’s 2021 Capital Improvement Plan. The council will discuss what funds will be used at its July 13 meeting.

“The goal is to start as soon as possible,” Carmody told the Nonpareil. “It’s a resource that we’ve needed.”

The police chief also noted, as he told the board, that the facility is used by 34 local, state and federal agencies in the region.

“This will be a revenue resource for us,” he said. “That will help us defray the cost to taxpayers and stretch that investment as far as we can.”

DES MOINES — Thousands of qualifying felons in Iowa will be eligible to vote this November thanks to an executive order Gov. Kim Reynolds sign…

Compromise can’t be one-sided, according to Sen. Chuck Grassley, who is accusing congressional Democrats are playing election-year politics wi…

In changing landscape, will Iowa hang on to its first-in-the-nation presidential caucus?

"Communities of color, rightfully so, want a larger voice in the early states." Some pushing for a shake-up object to relatively small, mostly white states playing such a prominent role.

Coalition asks Board of Supervisors to condemn armed group, issue statement on rule of law

DES MOINES — Thousands of qualifying felons in Iowa will be eligible to vote this November thanks to an executive order Gov. Kim Reynolds sign…

A man shoots a pistol during live-fire shooting practice at the Southwest Iowa Law Enforcement Training Facility during a session of the Council Bluffs Police Department Citizen’s Police Academy on Thursday, March 8, 2018. Council Bluffs and Pottawattamie County officials are working to build a new 100-yard outdoor range at the facility.