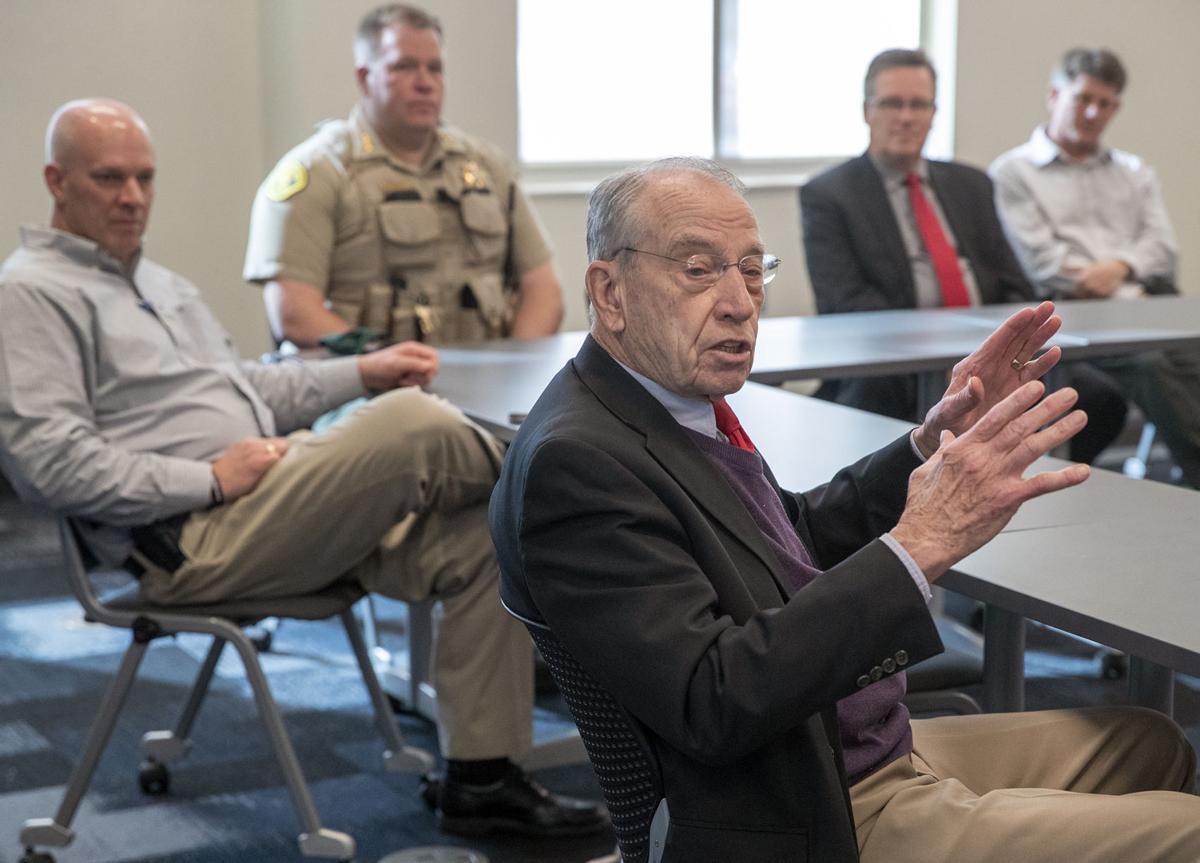 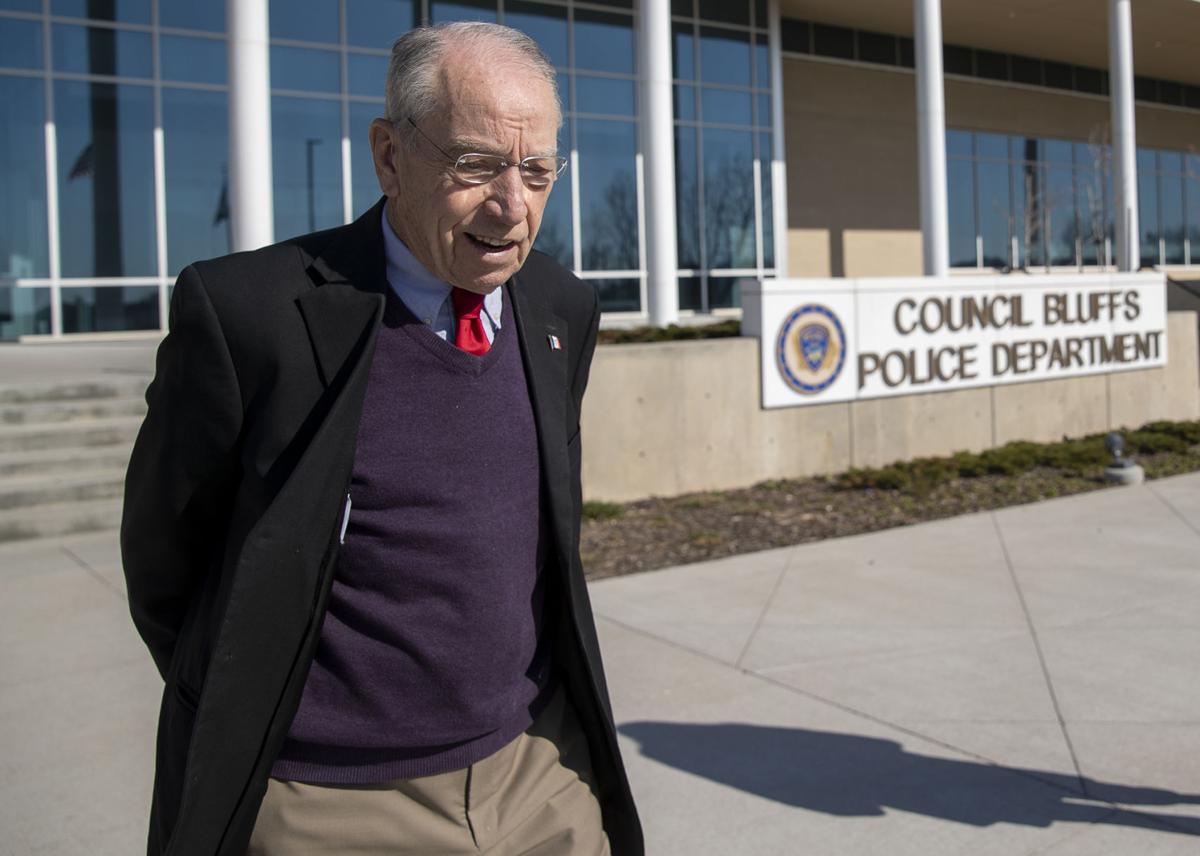 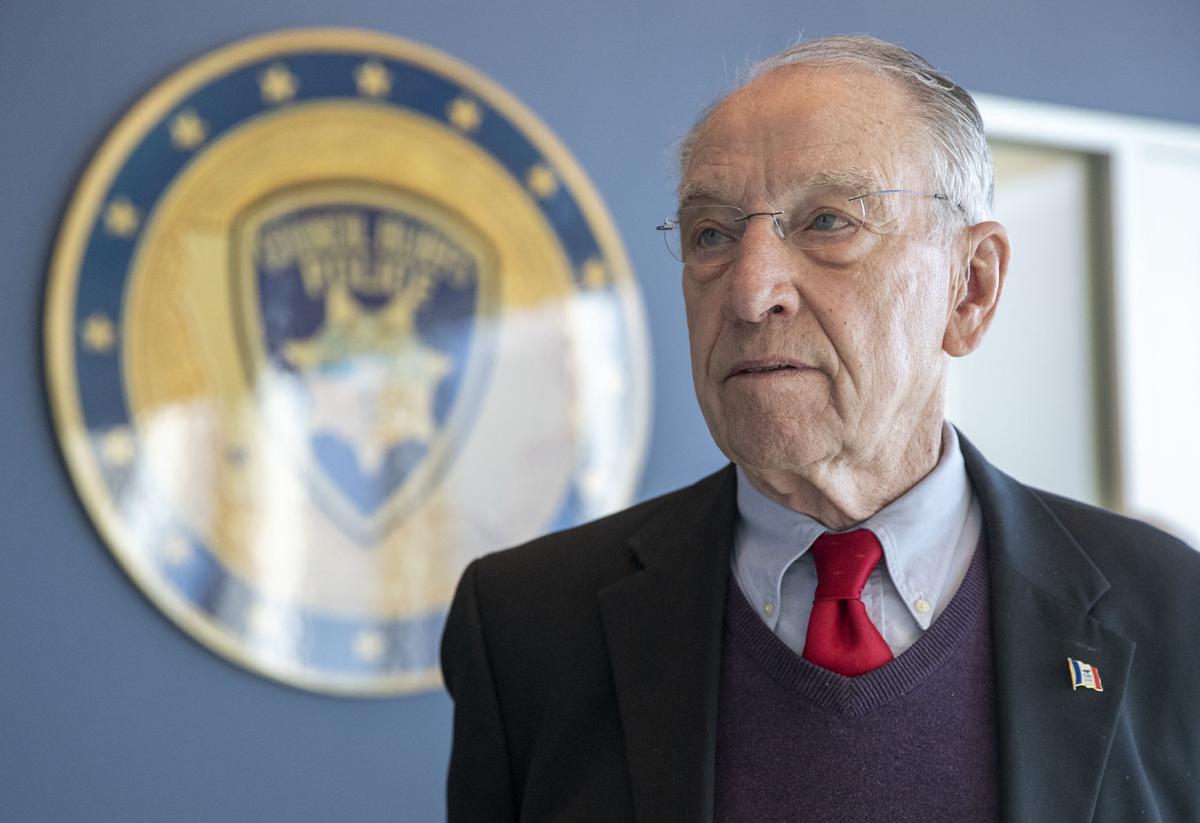 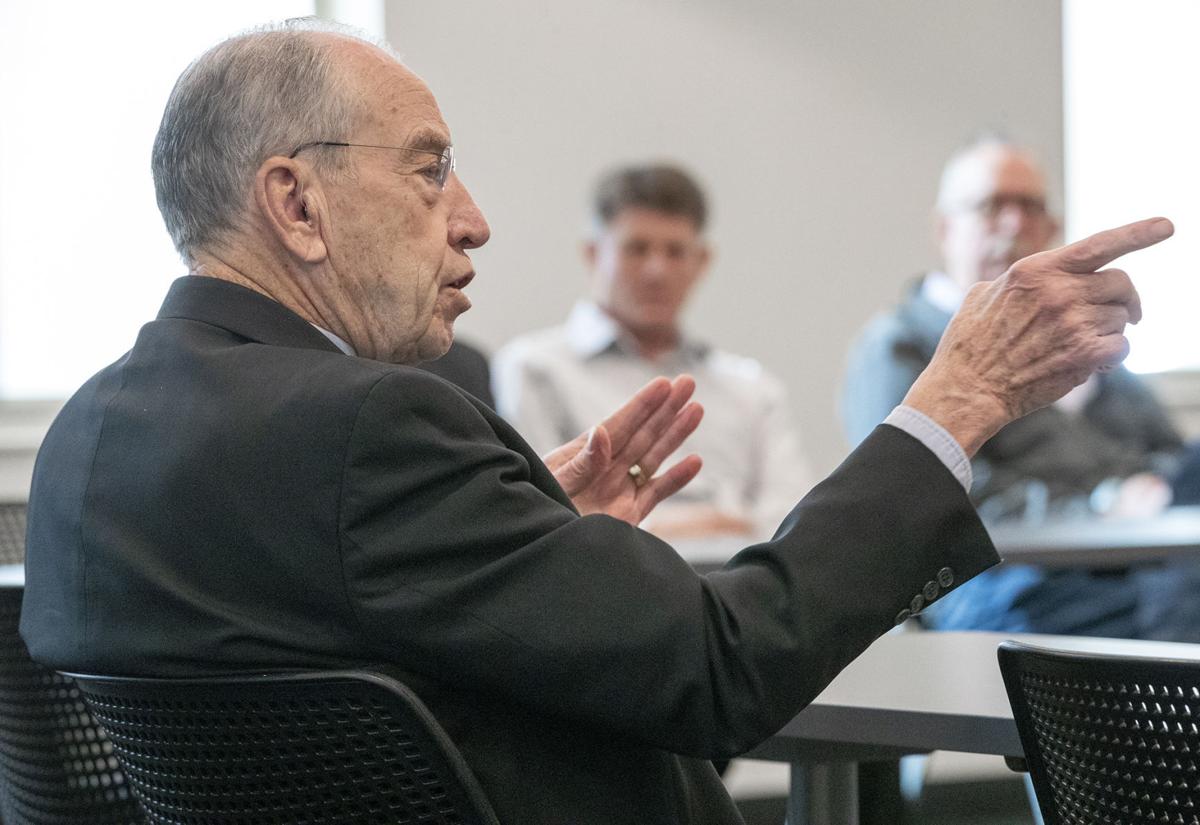 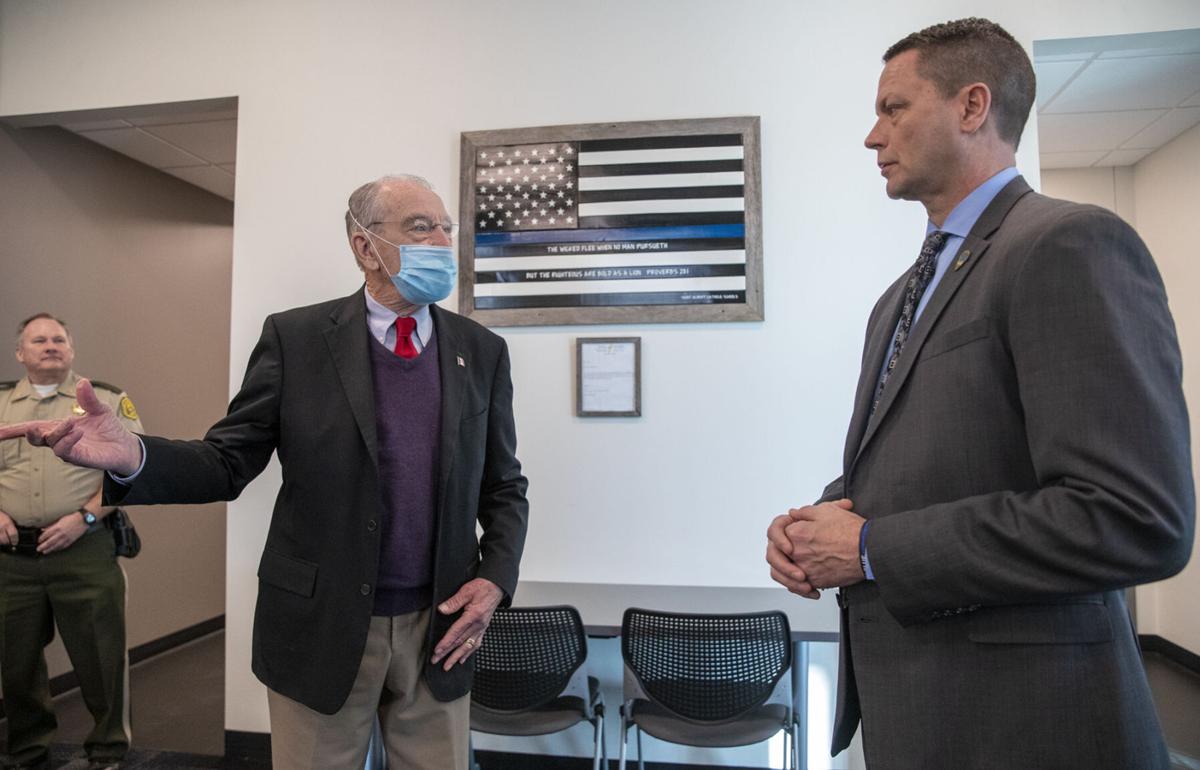 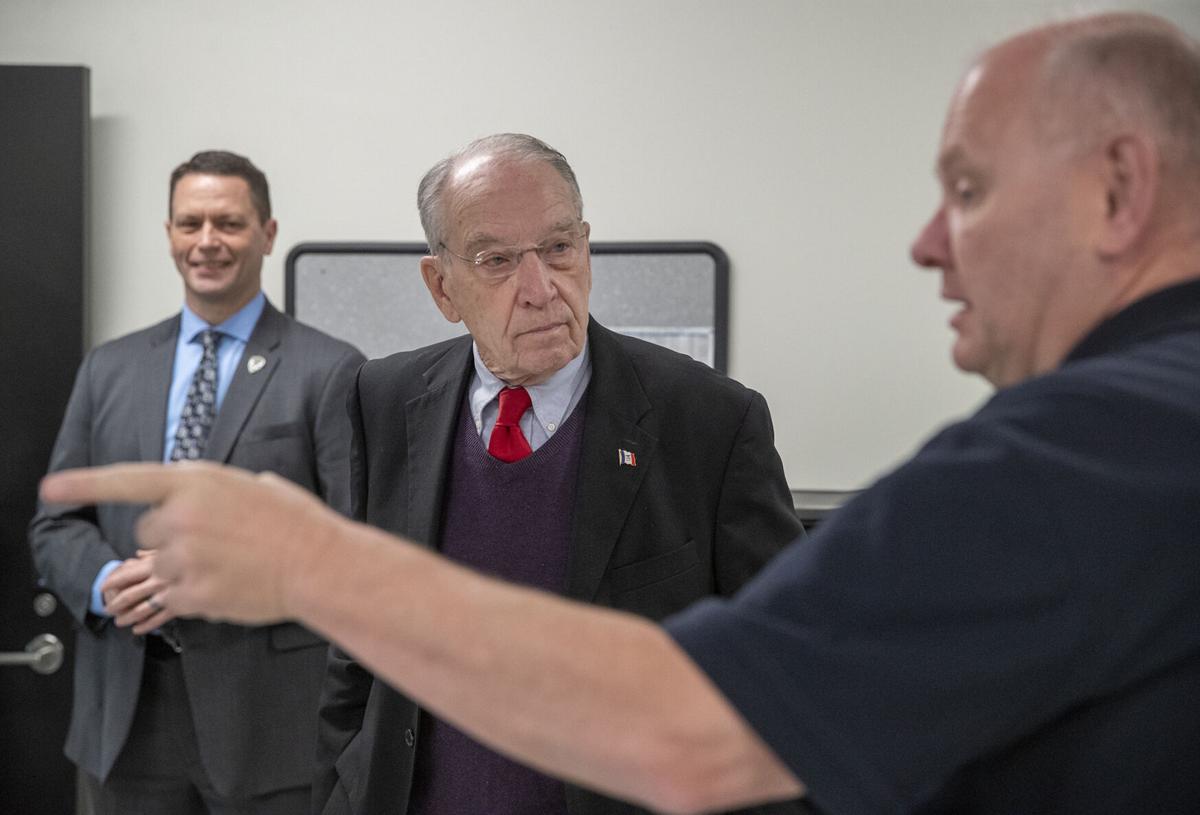 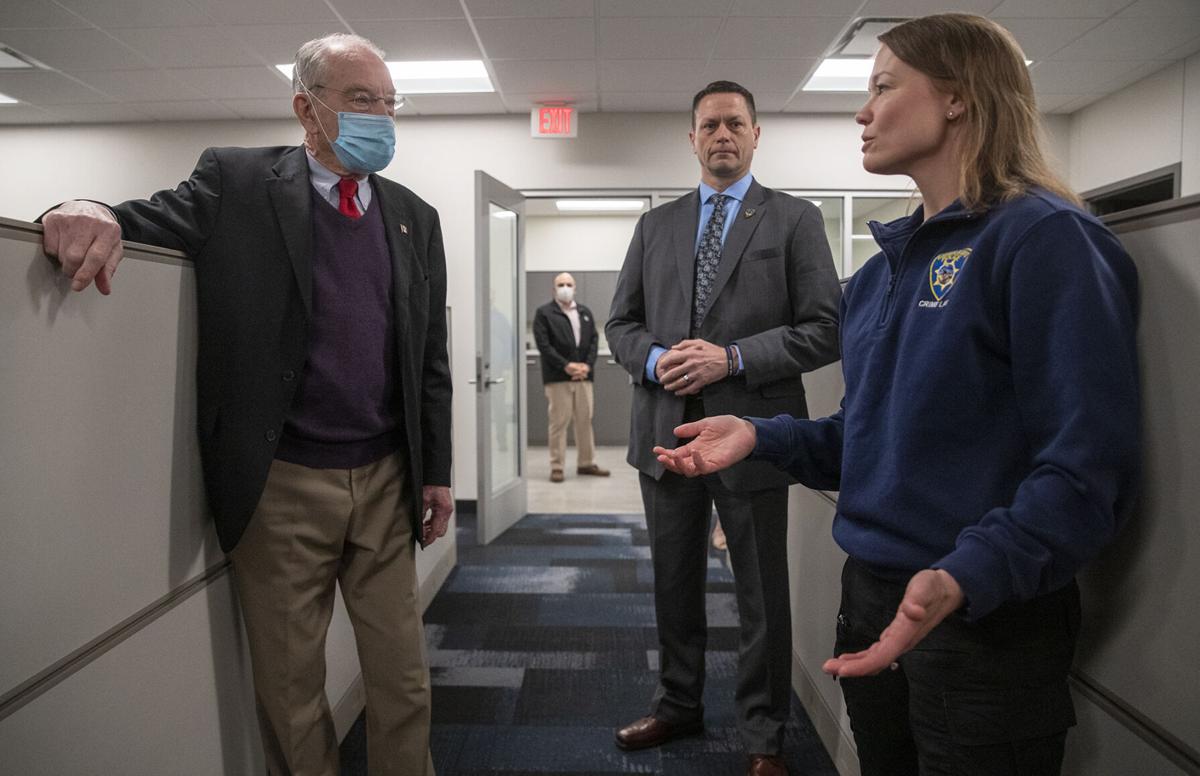 U.S. Sen. Chuck Grassley didn’t say if he’d be running for re-election during a stop in Council Bluffs on Wednesday.

“You’ll know in September, October (or) November,” Grassley said when the topic came up during a discussion with officials from law enforcement, city and Pottawattamie County government and the business community at the Council Bluffs Police Department headquarters.

Should he not run, Grassley said he wouldn’t make an endorsement during a Republican primary for the seat.

“If we have a Republican primary, I would not get involved,” he said, but of course would throw his support behind the eventual nominee.

“I see the benefit of a Republican majority in Congress,” he said, criticizing the most recent COVID-19 relief package as bloated with too much money going toward issues that don’t address the issue and criticizing efforts by Democrats to decrease or shift funds that go to law enforcement.

During the question and answer portion of the Council Bluffs stop, which also included a tour of the roughly $18 million police facility that opened in December 2018, Grassley voiced his support for the filibuster, saying the 60-vote majority required to end debate results in compromise.

“Are they thinking ahead?” he said of Democrats who would like to see the filibuster removed but could find themselves again in the majority as early as 2023. “I hope they don’t do away with it.”

Asked about recourse for Republicans should the filibuster be removed, Grassley brought up Senate Majority Leader Mitch McConnell’s recent threats about the potential action. In a Senate floor speech, McConnell spoke of a “scorched earth” approach that would would grind Senate business to a halt by refusing to give consent for routine operations — from the start time for sessions, to the reading of long legislative texts, to quorum call votes, the Associated Press reported.

“Now I’m sure all of you in this room would say if we did this, say we aren’t doing our jobs,” Grassley said in discussing McConnell’s threat. “Shut down the Senate, that’s about all we can do. I’m not sure McConnell checked with all 50 Republicans on that.”

Asked by Council Bluffs Mayor Matt Walsh about earmarks, Grassley said he’s against their return in the Senate. The Democratically-controlled House removed a ban on them in February.

“My position is probably not going to hold,” he said, noting the political winds on the issue and the need to use them should they return. “If we in Iowa don’t do it, will Illinois (or another state) get that money?”

Grassley brought up the “Bridge to Nowhere,” an Alaska project viewed as the height of pork-barrel spending that would’ve seen a $231 million bridge erected to service an international airport and roughly 50 residents. The project was vilified and eventually canceled, but it in part led to the ban on earmarks.

Advocates for earmarks have called for transparency to ensure only legitimate projects are funded. House Democrats have put a cap on the congressionally-directed spending. Roll Call reported for-profit entities will not be eligible, while the Government Accountability Office will audit the process.

Asked about the Jan. 6 attack on the U.S. Capitol, Grassley said, “It’s horrendous that it happened and shouldn’t have happened. I’ve said publicly the president (former President Donald Trump) bears some responsibility. I didn’t go as far as saying he bore 100% of the responsibility, and I don’t think he did.”

Grassley said he was taken to a secure location early during the attack, and watched events unfold on TV.

“You just think, ‘could this really be happening?’ And obviously it did happen. But all the attention was on Jan. 6. In every speech I give, I try to remind people about (another) federal building that had the same amount of damage — the Portland (Oregon) federal courthouse,” he said, referring to destruction during protests about police injustice and other issues.

“Violence is violence, wherever it is,” Grassley said.

In his opening remarks, Grassley said he supports state legislatures putting forth “back the blue” bills and said he is against defunding police.

Council Bluffs Police Chief Tim Carmody asked about some provisions of the George Floyd Justice in Policing Act of 2020, which passed the House in 2020 but faces an uncertain future in the Senate.

According to the Congressional Research Service, the bill, “addresses a wide range of policies and issues regarding policing practices and law enforcement accountability. ... The bill facilitates federal enforcement of constitutional violations (e.g., excessive use of force) by state and local law enforcement.”

The bill includes a limit on qualified immunity as a defense to liability in a private civil action against a law enforcement officer or state correctional officer, according to the service. Qualified immunity, created by the U.S. Supreme Court in a series of cases, holds that “Government officials performing discretionary functions generally are shielded from liability for civil damages insofar as their conduct does not violate clearly established statutory or constitutional rights of which a reasonable person would have known,” per the 1982 Harlow v. Fitzgerald case.

Critics of qualified immunity have argued, in part, that the “clearly established” rights provision has been interpreted by the courts too narrowly, allowing for constitutional rights violations because that specific act had not come before the courts before.

“I’m not an advocate for changing qualified immunity,” Grassley said. “I don’t know how you expect people to do your job. How am I supposed to make a judgement about today, tomorrow or a year from now, when you as an individual policeman have to do when you’re confronting a very serious situation? Then you have to worry about being sued for it ... you’re probably not going to do your job.”

After the event, Carmody said, “The challenge we have right now is trying to alter (qualified immunity) would” hurt officer recruitment even more than what the department is currently facing.

“Officers come into this knowing they’re doing the right thing and they believe they’re doing the right thing in the moment, that they have that back up and that support under qualified immunity,” he said. “We’ve not afraid of being challenged about performance or actions and things like that, and we do hold people accountable. But taking that completely away exposes that officer personally. As opposed to professionally.”

“Why would a person get into that profession?,” Carmody asked of the potential exposure risks should the policy be changed.

During a tour of the police headquarters, Carmody noted the space is leagues better than the former headquarters, while various in-house labs allow for quicker processing turnaround times.

Delays in processing when evidence is sent to overloaded state labs, “delays justice for victims and delays outcomes for the abused,” Carmody said while showing Grassley the cyber crimes lab.

A group of area residents are hoping the fight to keep Baughn Street continues.

The Pottawattamie County Board of Supervisors voted unanimously to approve the county’s Fiscal Year 2022 budget at its meeting Tuesday morning.