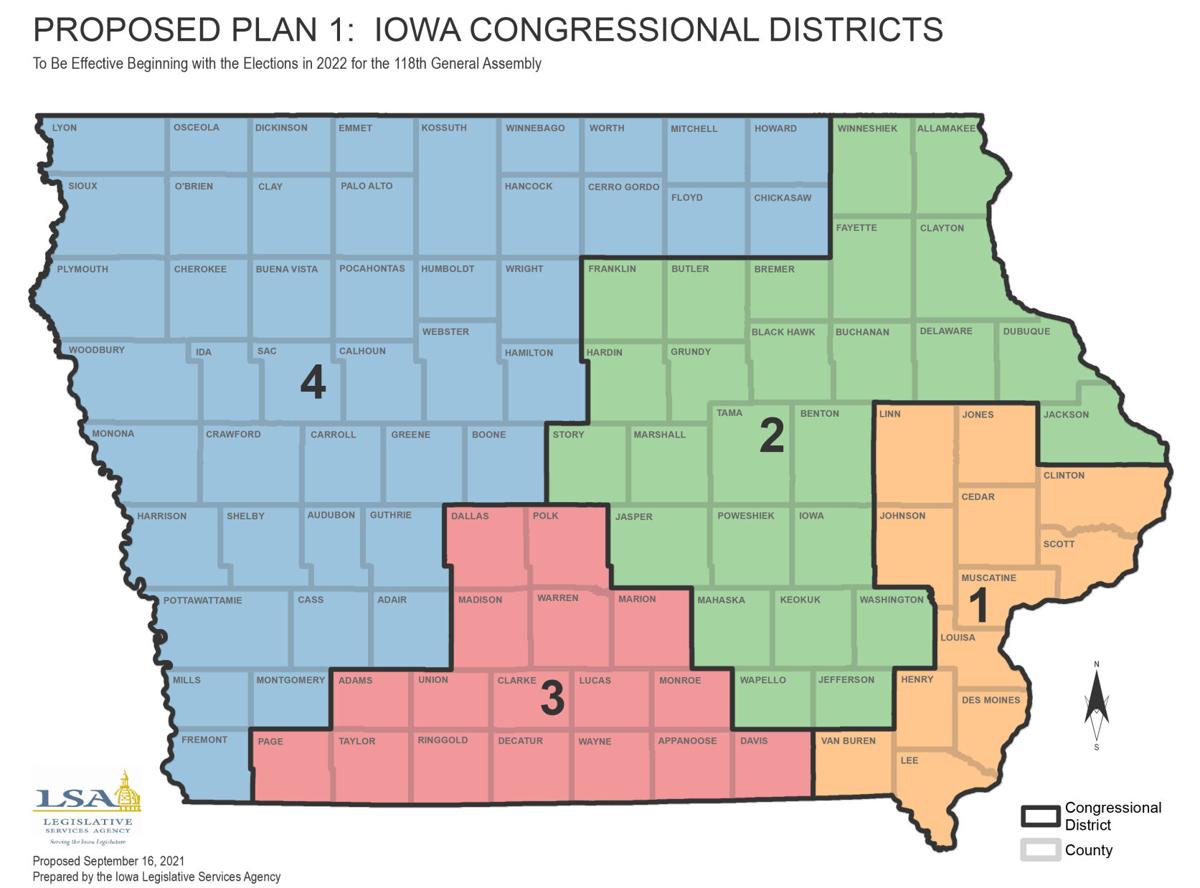 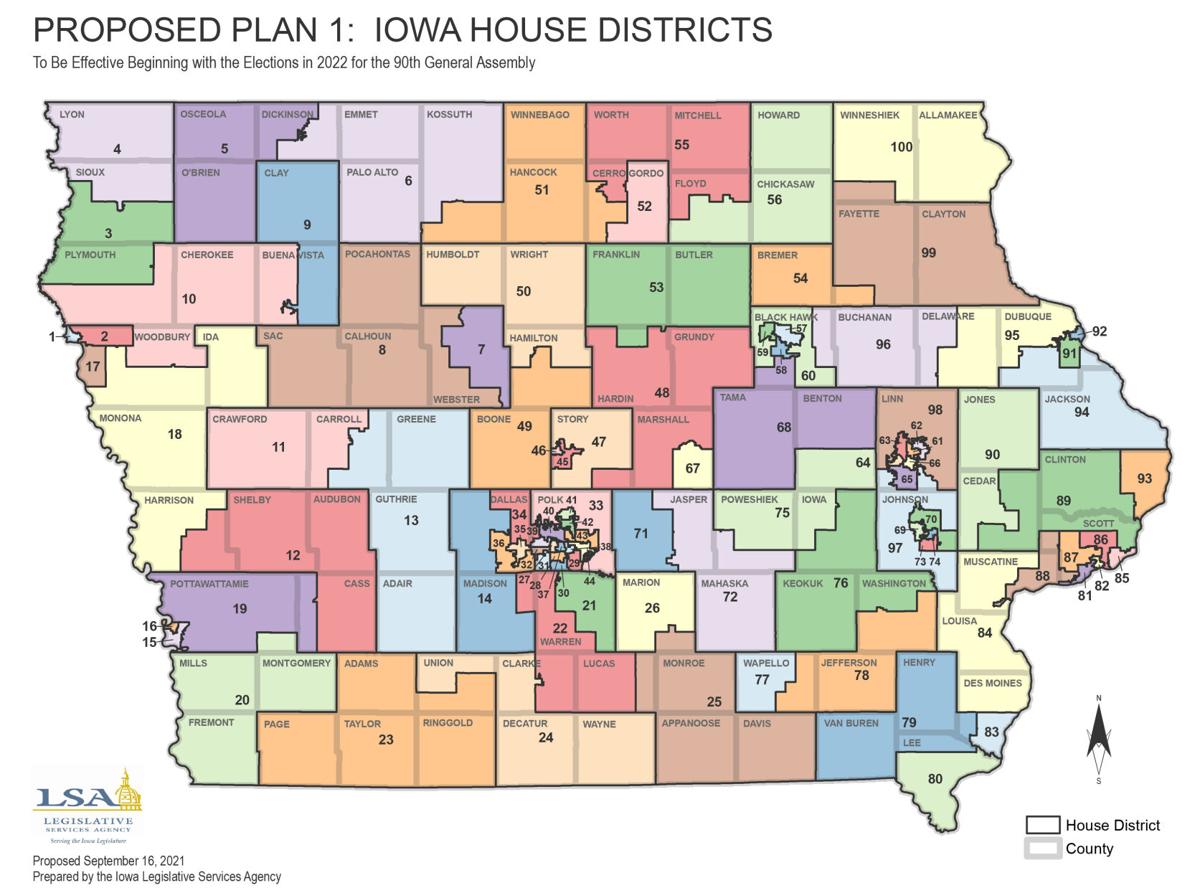 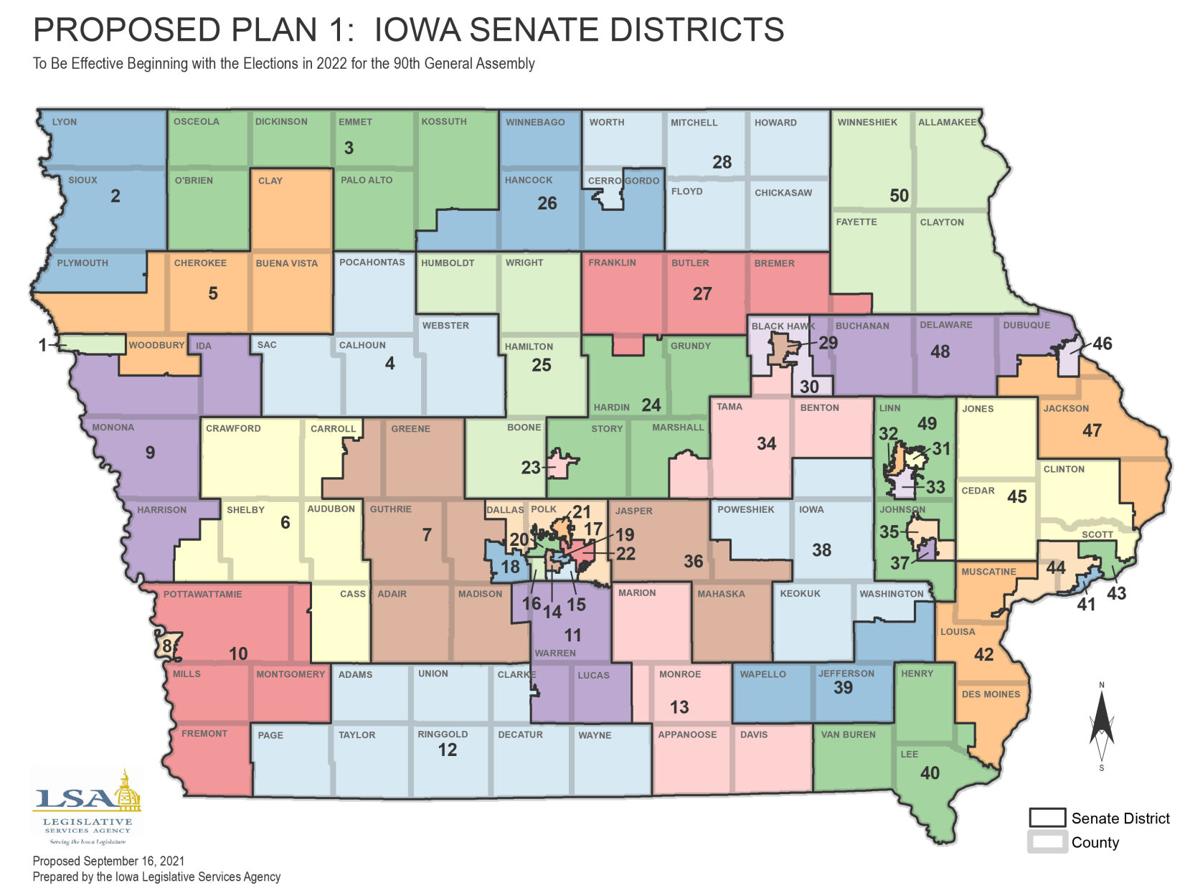 DES MOINES — Iowa’s four congressional districts would include two that lean heavily toward Republicans, one that favors Democrats and one that both parties would have a chance at winning under proposed redistricting maps released Thursday by a nonpartisan agency.

The Legislative Services Agency redrew the state’s political dividing lines to create a southeastern Iowa 1st Congressional District likely to favor Democrats by placing Linn, Johnson and Scott Counties in one district. In south-central Iowa, the 3rd District would slightly lean Democratic thanks to the inclusion of Polk County, the state’s large population base.

Pottawattamie, Mills, Montgomery, Fremont and Cass Counties would shift to the 4th District from the 3rd. Rep. Cindy Axne, a Democrat, currently represents the 3rd and Rep. Randy Feenstra, a Republican, represents the 4th.

The 4th District would grow even larger, increasing from 39 counties to 44 counties, approaching nearly half of Iowa’s 99 counties. It has long been a Republican stronghold and would be even more conservative under the new map.

Mary Ann Hanusa, a former state representative who’s declared for the Republican primary for the 3rd District, issued a statement calling on the Legislature to reject the map.

“I call on my former colleagues in the Iowa Legislature to reject this map. With over 50 Iowa state legislators put in districts against another member and an incredible geographic span of congressional districts, this map puts an unfair burden on constituents to have access to their member of Congress,” Hanusa said in the statement. “Iowans take pride in and have grown accustomed to the accessibility they have to their elected leaders. This map proposal would stress that relationship to unspeakable levels. Iowans deserve better.”

In northeast Iowa, the proposed 26-county 2nd District would gain Story County, home to Ames, and lean more toward Republicans.

Iowa currently has one Democrat in the U.S. House and three Republicans.

By state law, the nonpartisan Legislative Services Agency is responsible for following detailed guidelines to ensure population balance among Iowa’s congressional districts and to prevent political influence in the initial drafting of changes.

The agency’s report said the ideal congressional district population is 797,592 and each of the new districts are close to that, with the 1st District having 63 more people, the 2nd District 36 under, the 3rd eight people under, and the 4th 18 under.

A five-member Iowa Temporary Redistricting Advisory Commission now has 14 days to hold public hearings to gather comment and prepare a report for the Legislature.

The commission has scheduled virtual hearings for Monday, Tuesday and Wednesday, and the Legislature is scheduled to meet in special session beginning Oct. 5.

Republicans hold a majority in the Legislature, so they will have the power to approve or reject the first set of maps.

“Our nonpartisan redistricting process in Iowa is considered one of the fairest in the nation. After months of delays, we now have a proposed set of maps for redistricting in front of the Iowa Legislature. We will do our due diligence and review it thoroughly to ensure it is a fair set of maps for the people of Iowa,” Iowa House Speaker Pat Grassley said in a statement.

Senate Democratic Leader Zach Wahls said his caucus is reviewing the plan to ensure it meets all legal and constitutional requirements for redistricting.

“We believe Iowans deserve a fair redistricting process, without interference from politicians, and without partisan amendments. We encourage Iowans to examine Plan 1 and to make their voices heard at three public hearings next week,” he said.

The maps could have a significant impact on state legislators because the new legislative boundaries place many incumbents in the same district.

It appears 24 Senators and 38 House members would be in a district with another incumbent, for a total of 62 lawmakers who would have to run against each other, move or drop out. In the House, it’s eight Democrats and 30 Republicans, including Grassley, who was placed in the same district as Shannon Latham. In the Senate, seven Democrats and 17 Republicans are paired in districts.

Jacobsen was first elected to the House in a special election in 2017 and re-elected in 2018 and 2020, winning all three by a wide margin.

“Almost all 30,000-plus of my constituents residing in the old District 22 are now in the new District 19. For the past several years I have traveled through this area working with constituents on a variety of issues — from the economic impacts of flooding and COVID, farming and small business issues, public safety, health, education, cutting both taxes and red tape,” Jacobsen said. “These people are like family to me. My wife and I have reside in old District 22, and will reside in new District 19 to hopefully allow me to continue to serve the district constituents I love and for whom I fight so zealously.”

Wahls pointed out that it’s close to the 54 paired incumbents after the 2000 census, when lawmakers declined to pass the first map but accepted the second one submitted by the LSA. In 2011, 41 incumbents were paired together in the same district. Lawmakers that year approved the first map submitted.

Konfrst said she is reminding incumbents to not make any decisions until a map is signed into law.

“No for sale signs in the yard, no declarative statements about what they’re going to do,” she said.

Redistricting is required every 10 years and new lines are to be redrawn based on population changes reflected in the U.S. census.

Redrawing the political lines was complicated this year by a delay in releasing U.S. Census Bureau data blamed on the coronavirus pandemic. As a result, Iowa will miss deadlines mandated by the state constitution. However, Iowa Supreme Court Chief Justice Susan Christensen has signed an order giving the Legislature extra time.

A Council Bluffs woman expressed concerns about a family connection between a City Council member and a candidate during Monday's council meeting.

Labor Federation to sponsor forum for Bluffs School Board candidates

Lindsey Danielsen said she is running for City Council to make sure Council Bluffs continues to grow.

The Week in Iowa

Joe Don Hunter says he’s running for the Council Bluffs City Council to make sure younger generations have opportunities in the community.

Steve Gorman, a lifelong resident of Council Bluffs, is running for City Council because he wants to continue community service and serve the …

Chris Peterson is running for City Council because he believes “it’s time to breathe some fresh air back into the City Council.”

Jerry Meckna, owner of Guntech Holsters, said one of the main reasons he’s running for City Council is to tackle the methamphetamine crisis in…