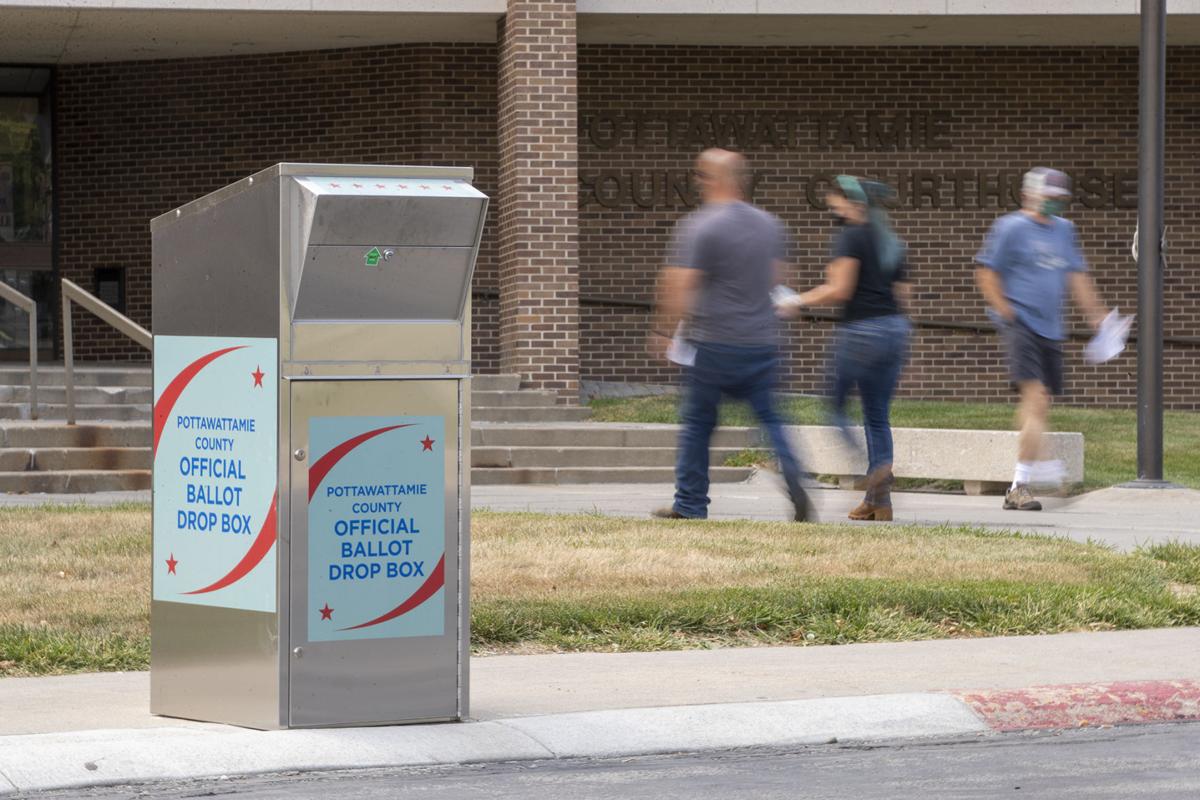 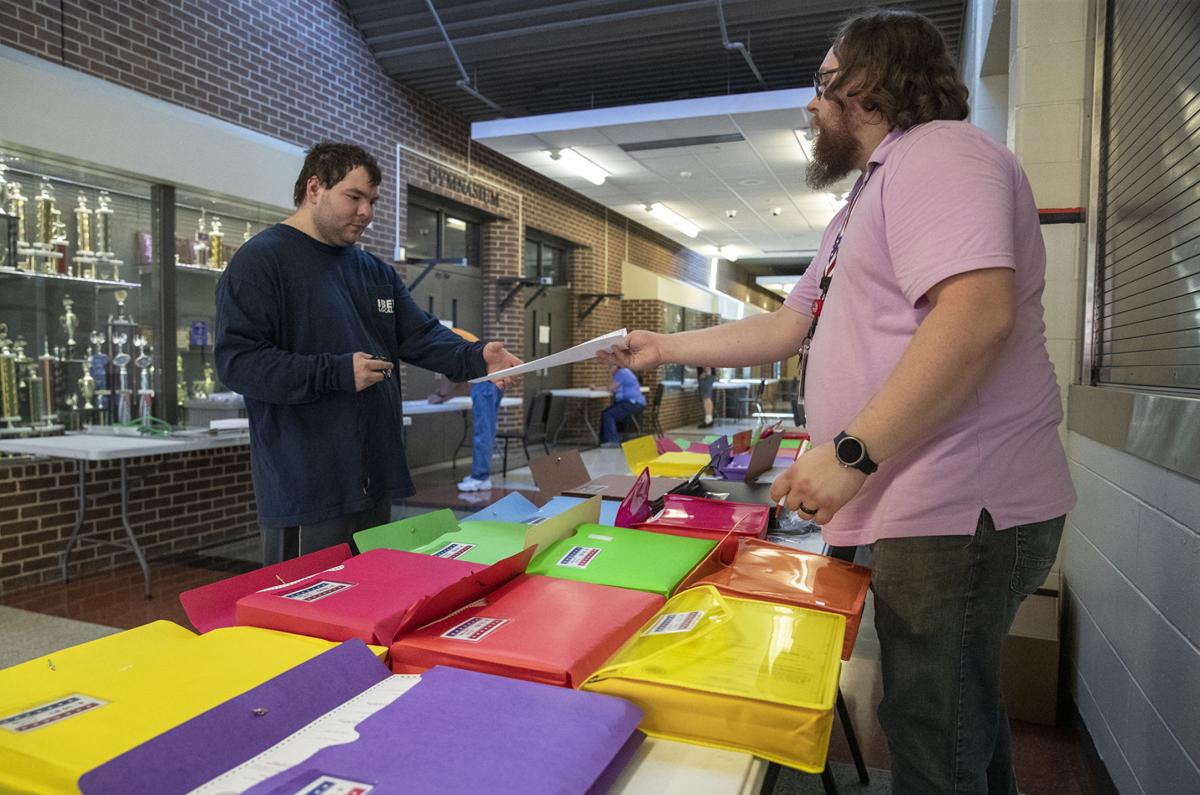 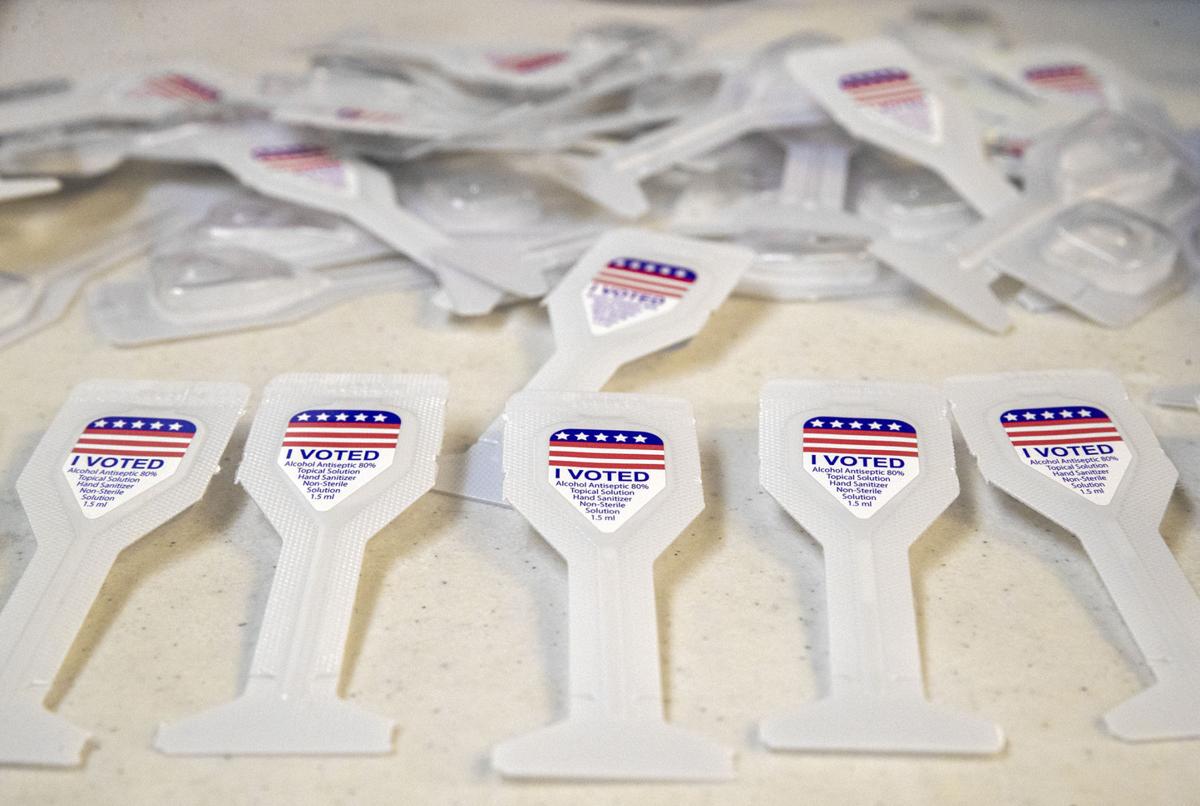 Single-use hand sanitizer packets that say “I voted,” courtesy of Southwest Iowa Renewable Energy, were handed out to voters in lieu of the traditional sticker during the June primary election.

Pottawattamie County Auditor’s Office Deputy Auditor Kristi Everett would like to see the ballot drop box outside the Courthouse remain there through the November election. And after some uncertainty, it appears it will.

The Iowa Secretary of State’s Office has told county auditors in recent training sessions Iowa law does not allow for the practice, the Des Moines Register reported earlier this week. On Friday, an office official said it’s likely secure drop boxes will be allowed to remain on county grounds.

“I think auditors elections officials, we’ve given our opinion and ask for further guidance from them,” said Everett, who runs elections for the county. “My opinion is I want them at least at the courthouse, with security surveillance. I’m all for that.”

Thirty-nine of the state’s 99 counties used a drop box for the primary election with no challenge from the state, the Associated Press reported Wednesday. That includes Pottawattamie County.

Kevin Hall, communications director for the Secretary of State’s Office, said Friday additional guidance and clarity will be given to auditor’s “shortly.”

“This issue arose because there were complaints about one county auditor placing unsecured and unsupervised ballot drop boxes next to trash cans at a grocery store, so we asked for the Attorney General’s legal guidance. Those are in clear violation of Iowa Code,” Hall said in an email to the Nonpareil. “After consulting with the Attorney General’s Office, our view is that county auditors can provide a secure, monitored drop box at their office building. Auditors must take all reasonable and necessary steps to ensure the security. We will be offering auditors additional guidance on ways to accomplish that within the next few days.”

The drop box remains at the Pottawattamie County Courthouse, available for residents to drop off their absentee ballot request form.

“Oh it was very popular for the primary,” Everett said. “And it’s been popular for dropping off absentee requests (for the general).”

Everett said her office has received around 20,000 total absentee requests so far via the mail or drop box, already surpassing the 13,000 requested for the primary.

Everett said she’s been in touch with local Postal Service officials, “getting clarification ... that they’re working diligently with ballots, that they will be a priority.”

The county saw 22% turnout when accounting for all 63,757 registered voters in the primary. Those elections were closed to parties, with Republican turnout at 33% and Democratic turnout at 31%, Everett said after the June vote.

At the time, Everett said from what she could find in the records, turnout was likely the best in county history. She noted the next highest came in the 1960s. She also noted the amount of absentee ballots in the primary exceeding absentee and Election Day votes combined for many previous elections.

With so many people already planning to take advantage of absentee voting for the general election, the county is on pace for another record turnout.

“We’ve had a really good response so far,” Everett said Friday. “We’ll be higher than we’ve ever been on absentees.”

Per Iowa law, the auditor’s office can’t send out absentee ballots until Oct. 5. Everett said her office is preparing to send out ballots that day to anyone who requests one prior to Oct. 5. Voters must turn in their absentee request forms must be turned in by Oct. 24 to get a ballot before the Nov. 3 election.

Also on Oct. 5, the auditor’s office will begin offer in-person early voting at its election building, 508 S. Sixth St. Everett said social distancing measures will be in place as precautions against the spread of coronavirus, with only three to four voters allowed in at a time at the small building.

“We cannot require voters to wear masks. We will implement social distancing,” Everett said. “The ballot will be two-sided, it’ll be a full ballot. It’ll take people a while to vote possibly. That’s why we’re encouraging absentee voting, stay home, stay safe.””

Everett said like all elections, “We plan for the worst and hope for the best. It’s very challenging this year.”

Get Election 2020 & Politics updates in your inbox!

Keep up on the latest in national and local politics as Election 2020 comes into focus.

Trevor Long wanted to get voting “taken care of.”

There will be two satellite voting locations available on Oct. 13 — at the Carter Lake Library for Carter Lake voters and Iowa Western Communi…

Your vote will count — and just once.

Single-use hand sanitizer packets that say “I voted,” courtesy of Southwest Iowa Renewable Energy, were handed out to voters in lieu of the traditional sticker during the June primary election.