In southwest Iowa county, a divide over wind turbines on farmland
0 comments
Share this
Only $5 for 5 months
1 of 2 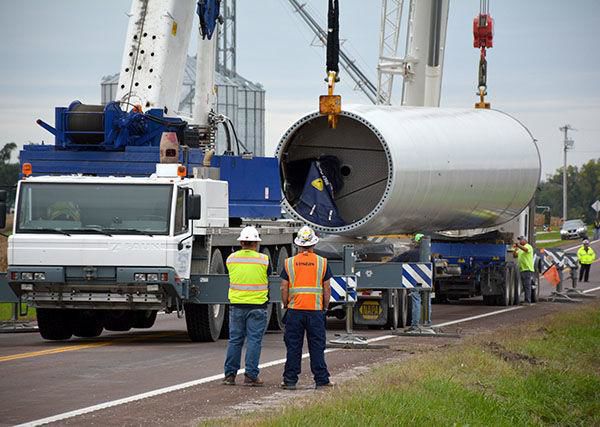 Crane operators place a section of a wind turbine tower onto a trailer on about Oct. 9 on U.S. Highway 71 near the Iowa-Missouri border at Braddyville. 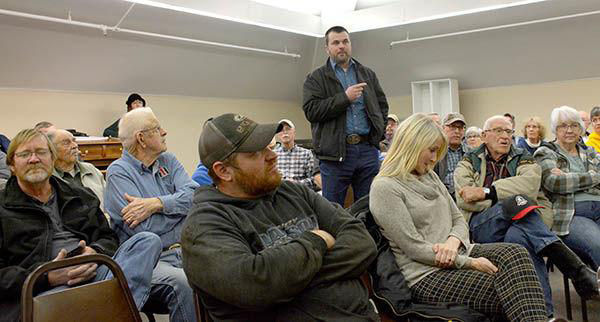 Jacob Holmes, standing, makes a comment during the Page County Board of Supervisors town-hall meeting about wind turbines held Dec. 16, at the Page County Courthouse in Clarinda.

CLARINDA — Some of what is known about wind turbines in Page County is on paper.

What isn’t fully known is how development of wind turbines will impact the people and area.

The Page County Board of Supervisors held town-hall style meetings on Dec. 16 at the courthouse in Clarinda and on Dec. 18 at the Shenandoah Fire Department, getting opinions and comments from the public about having wind turbines in the area.

In October, the board approved ordinances related to the operation and placement of the towers that can stand as tall as 300 feet and use the wind to generate electricity.

For more than the past year, county officials have been informed by related companies interested to build them in Page County, located southeast of the Council Bluffs metro area.

Setbacks — the distance a turbine can be from another structure — highlighted both meetings. Approximately 50 people were in attendance in Shenandoah.

“I found there is a group of landowners in Page County that are not having their property rights protected,” said Jacob Holmes, who provided his statement on paper to the board. “And not only that, but they are being potentially forced to give up their property rights with zero compensation.”

Holmes told the board a landowner who does not have a turbine may not be able to develop on his property if a neighbor has a turbine.

“This would mean, by the numbers given for your home setback distance, you would have 1,280 feet of your land that you are no longer able to use in the way you, as the landowner, choose,” he said. “Your right to safely build on your own land has been halted. And you receive zero say or compensation.”

Holmes suggested the setback measurement of someone who does not want a turbine should not be limited by the distance to the front door of his residence, but to anywhere on his property.

The ordinance states the distance a turbine to another structure must be 1.1 times the total height of the tower, or 1,500 feet, whatever is greater. Some towers are about 300 feet including the tip of the blade.

“Each wind turbine … should be set back a distance of no less than 1,500 feet from the property line without securing an appropriate agreement from the adjoining property owners. An affected property owner may waive this setback requirement by executing a written waiver or agreement,” Holmes said.

“Other counties’ setbacks are up to 1,700 feet,” said Supervisor Chuck Morris.

Page County’s ordinance can be revised. Morris said the supervisors will review the comments from the meetings and review, and possibly edit the ordinance in January. No supervisor decisions were made during either meeting.

Setback distances influence the development of wind turbines, according to others.

“Anytime an ordinance is in place it’s a barrier to entry,” said Rex Engstrand, a Page County landowner. “You are limiting your tax base. Companies are going to go elsewhere. You don’t want to cut your nose off to spite your face.”

Morris said the county issued a permit for an electrical substation east of Braddyville.

“It is unknown if that means a turbine will be in Page County,” he said. Turbines are under construction in northern Missouri. It’s ideal for turbines to be erected close to adequate transmission lines.

A turbine’s noise production and its visual impact were also mentioned.

“A grain bin fan is a noise too,” said John Slater, who lives near Shenandoah. “A grain bin might run 10 days a year, give or take. You can set it up where it doesn’t affect buildings. If you had a lawnmower running 24 hours, 365 days a year two blocks from your house, I think everyone in the county would be up in arms.”

Jane Stimson said she appreciates living in the country for the natural, unobstructed views and lack of noise pollution.

“I appreciate to see the sun rise and sun set,” she said.

Wind turbines are equipped with warning lights for airplanes flying at night. She suggested including in the ordinance the technology that would activate the lights only when an airplane is in proximity.

Newt Heaton said he knows of places that have benefited from turbines.

“Around the state, it puts a lot of tax money into the country. Some schools have some turbines and not many kids, but there are new schools because of the money. If property tax relief is what we are all looking for, something should be considered,” he said.

Page County landowner Shirley Long said she has a turbine lease in Missouri and her neighbor has two turbines. Long said not every property is ideal for a wind turbine.

“I can hear them,” she said. “The lights make a noise. They just hum, and it’s not a terrific noise.”

The discussion in Clarinda among approximately 60 people lasted about two hours.

“We can’t decide what comes into the county,” said Supervisor Chairman Alan Armstrong. “You, the landowners can. We could have done nothing and people would have done this individually. We have to protect the 15,923 people who all have different views.”

Robin Sunderman called turbines “short-term money” as she said turbines are a threat to birds, bats, soil quality and quality of life.

“They devalue property,” she said. “People don’t want to live by noisy generators.”

She emphasized the process to decommission and deconstruct a tower should it no longer be needed. Saying they have a life expectancy of at least 20 years, she fears what to do with them as it is extremely difficult to dispose of them, let alone the cost to dismantle.

Page County Supervisor Jon Herzberg, who also sits on the Page County Landfill board, said the landfill will not accept a wind turbine part because of their size and inability to decompose.

“The huge question is on what to do with decommission. We are going to have fields of abandoned junk,” Sunderman said.

Armstrong said decommission was a high priority by the supervisors while researching the ordinance.

“It won’t be a perfect world. That was our biggest concern, not where they go, but 20, 30 years down the road,” he said.

Morris suggested related companies have a bond to pay for decommission to “protect our farmers and landowners.”

Ryan Yrkowski, who spoke when the supervisors approved the ordinances, referred to the health nuisances or hazards created by turbines, including creating noise and disrupting sleep patterns.

Kristi Mcenaney, a lease agent for TradeWind working in Missouri, said a turbine is no louder than a grain bin dryer a similar distance from her home. She did say the faster the turbine is working because of wind speed, the more noise is created. She said she is not bothered by the noise.

The county’s ordinance states the maximum sound level a turbine can make is 55 decibels measured from a non-participating resident.

Ashley Yrkowski said her research has shown wind turbines have caused various lawsuits in other places.

“These are people fighting, turning neighbors against neighbors,” she said. “Is that what we want to happen?”

Morris said the county could have had a setback up to 3 miles, “but we wouldn’t get any wind turbines. I don’t want to do that,” he said.

Counties with wind turbines have received property tax revenue from them. Morris said any additional revenue to the county will be appreciated.

“We are not living in an area booming with tax revenue. If we don’t add to the revenue, it equates to a tax increase to those who are living here. The turbines won’t guarantee no tax increase,” he said. “I’m not saying money is everything. The pressure for the board of supervisors to provide roads, law enforcement, services in the courthouse, those expenses continue to grow. It’s worrisome to us. We want to be business friendly and not shut down opportunities. There are people who want them (turbines).”

Jean Ellison said she is “on the fence” about supporting wind turbines.

“Our real estate taxes go up and up,” she said. “I wouldn’t mind if the money from that area stayed in that area.”

Herzberg added on Dec. 18 how the supervisors attempt to keep the levies stable, but state-mandated valuation increases on properties create a greater property tax bill.

“What increases is the value of your land. As valuations go up, it looks like we are increasing taxes. We are not,” he said.

Mark Zaccone, a developer for Invenergy, was in attendance but declined to share details of a typical contract for a landowner to have a wind turbine on his property, citing protecting privacy for the landowner and the business.

Scott Davison said he knows of feuding families in Missouri over wind turbines, and added wind turbines are just another change in society and technology.

“Wind is clean. Think about an oil well, it makes sense to use wind and solar. When country roads were first built, that changed the landscape. The farm I grew up on has (electric) highlines crisscrossing the farm,” he said. “It will never be a Norman Rockwell painting again.”

Pottawattamie County has an increase of 19 positive tests

The state COVID-19 website listed a total 1,308 cases of COVID-19 in Pottawattamie County on Sunday afternoon, an increase of 19 over a roughl…

Maj. Gen. Jon A. Jensen, a Council Bluffs native, on Monday officially assumed duties as the 22nd director of the Army National Guard.

Teen dies in wreck near Sidney

A 14 year old from Hamburg has died from injuries suffered in a vehicle wreck on Highway 275 south Sidney.

Thousands of Iowans need to renew their expired licenses

DES MOINES, Iowa (AP) — Four months after the coronavirus prompted the Iowa Department of Transportation to shut down walk-in appointments at …

Crane operators place a section of a wind turbine tower onto a trailer on about Oct. 9 on U.S. Highway 71 near the Iowa-Missouri border at Braddyville.

Jacob Holmes, standing, makes a comment during the Page County Board of Supervisors town-hall meeting about wind turbines held Dec. 16, at the Page County Courthouse in Clarinda.