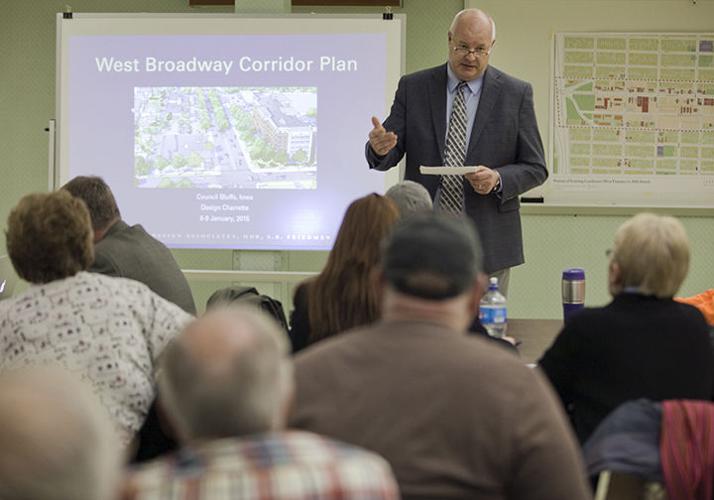 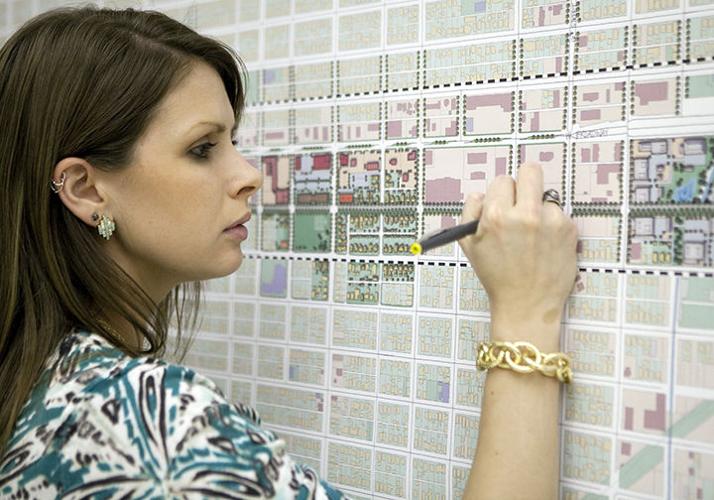 Erica Ridlon, a designer with Urban Design Associates from Pittsburgh, marks up a map of the West Broadway corridor on Thursday during a redevelopment presentation to the public at Community Hall on Thursday.


Approximately 80 people Thursday evening attended a preview of what the West Broadway corridor could become in the future, which may not be that far off, according to Council Bluffs Matt Walsh.

“There’s potential to do things quickly,” he said during the public meeting at Community Hall.

He was referring to addressing plans for the new First Avenue, once the site of abandoned railroad tracks, as well as switching Avenue A to two-way traffic.

The removal of those railroad tracks is a huge asset because it opens up new opportunities there, the audience was told. This could include a walk/bike trail to connect over to Omaha trails. Rapid transit is a possibility either on West Broadway or First Avenue.

“I’m excited about the trail corridor,” said Jim Nelson. “That would be a huge asset. The bus transit would also be huge.”

It was suggested that Avenue A become a two-way street, replacing the current one-way setup. This would help create a more residential feel to that street, planning officials said.

West Broadway would remain four lanes, but could develop a green median with plants and trees, the planners said. Or Broadway could keep the current center median, but add more landscaping along the curbs and sidewalks, the gathering was told.

Second Avenue could remain a two-way street, but have room for a separate bike path for bike commuters.

Side streets could be spruced up with trees to enhance the overall look.

“You can see rows of trees as you go by (on Broadway),” said Paul Ostergaard, a principal of Urban Design Associates of Pittsburgh, Penn.

Public input was provided after the presentation with their opinions helping to create a master plan that might be ready in a few months, according to Don Gross, director of the city’s Community Development Department.

During his campaigning to become mayor of Council Bluffs, Matt Walsh made the improvement of West Broadway high on his priority list. Well, Ja…

Why the colors of sunsets are so incredible

Why the colors of sunsets are so incredible

Erica Ridlon, a designer with Urban Design Associates from Pittsburgh, marks up a map of the West Broadway corridor on Thursday during a redevelopment presentation to the public at Community Hall on Thursday.