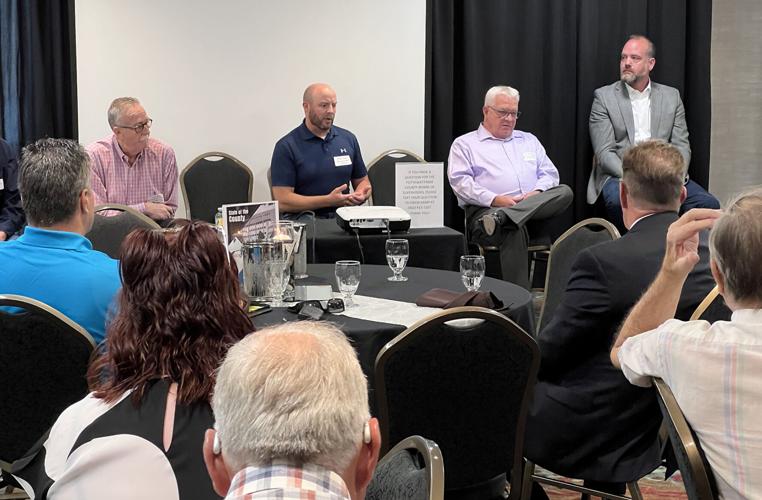 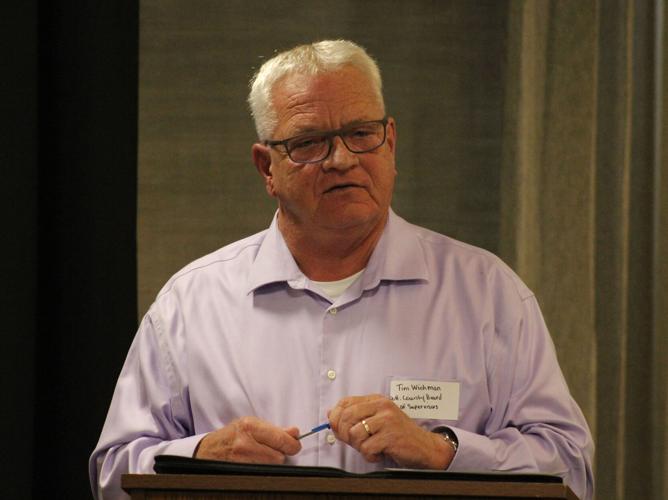 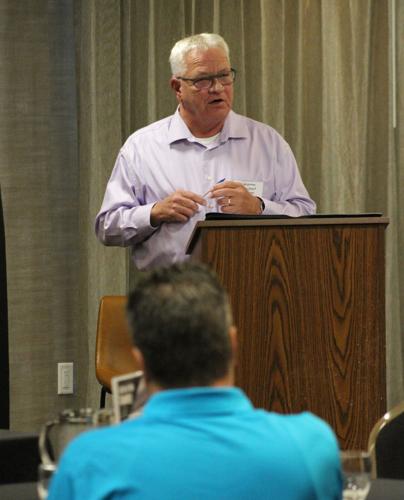 Pottawattamie County is looking to add businesses and grow its partnerships.

Tim Wichman, chair of the Pottawattamie County Board of Supervisors, told a group of business leaders Monday that new partnerships represent the biggest opportunity available for the county as it looks toward the future.

“This board has been pretty aggressive on economic development,” Wichman said. “If that would have been the focus of boards years ago, we’d be in a lot better shape than we are today.”

County officials discussed housing and a variety of other issues while providing an update and answering questions during the Council Bluffs Area Chamber of Commerce’s State of the County luncheon Monday at the Holiday Inn & Suites by Ameristar Casino.

The county also identified five projects outside of Council Bluffs that have been designated as priorities. Wichman said those are in Carter Lake, Crescent, Minden, McClellan and Treynor. McClure is submitting grants and other funding for those projects.

“We are currently still meeting with all of the other cities for smaller projects that the county can help with,” Wichman said.

The county is also working on paving 192nd Street south of the old Lewis Central bus barn, an industrial area with some existing businesses, he said.

“We want to make that more attractable to other businesses,” Wichman said.

Officials are also working with two developers on 180-lot subdivisions off Pioneer Trail, which will requiring paving 240th Street and Dumfries Avenue as well as extending water lines to those lots.

“This project has been in the works for about two years. Everything takes a little bit longer than this board member would expect,” Wichman said.

The Pottawattamie County Public Health Department is shifting out from its COVID-19 pandemic response, said Matt Wyant, the county’s director of public health, as well as planning and development.

“It was a much different approach than what you saw nationally,” Wyant said. “We were only two years into having a health department when the pandemic hit. This was all new to Pottawattamie County. A lot of the residents had not even had any interaction with a county health department up until that point.”

Wyant said the department is now trying to redefine itself to the public, with its main aim to educate people and address social determinants that are stopping people from accessing health care. It’s not just a vaccine clinic sponsor.

Monkeypox is another priority, along with regular immunizations, family planning and environmental health. Wyant said the department is also working on a community health needs assessment for 2023 to 2025, which has focused on mental health for the past two cycles.

“I anticipate that even through the next community health needs assessment that we’ll continue toward that mental health focus,” he said. “There’s a lot of things that play into it — food insecurity, housing, all of those portions can come back and affect people’s mental health.”

Pottawattamie County recently hired a public relations manager, who will be putting out more information about what’s happening in the county.

Supervisor Justin Schultz said that Craig Carlson is “in the beginning stages of his role,” which had not previously been part of the county government.

The Pottawattamie County Jail is a 288-bed facility that averages between 250 and 260 prisoners a day, Wichman said.

A contract providing space to federal Immigration and Customs Enforcement officers expired a couple years ago, so they don’t have reserved beds.

“However, they still do put in 50, 75 or so federal or ICE prisoners every day,” he said. “We get paid $105 every day for those. You know, the days of providing them a tin cup of water and a bologna sandwich are over.”

Schultz said the county was pushing the limits on the jail, but the numbers have come down since adding some beds and the change with federal detainees.

“We’re still pretty full, but we still have some room in there,” he said. “Overall, I’d say we’re in pretty decent shape.”

“We’re actively doing a lot of improvements in the parks,” Shoemaker said.

Campgrounds are being improved at Botna Bend Park in Hancock. Cabins have been added at Arrowhead Park in Neola. A new recreational vehicle park was added in Old Town Park in Macedonia.

“It’s exciting to have that property added to Hitchcock,” Shoemaker said. “We’ll be able to expand our existing trails — we have about 10-plus miles of trails at Hitchcock now, so we’re going to expand those into Mt. Crescent and give people more opportunities to get out into the Loess Hills.”

A feasibility market analysis is being prepared to go beyond skiing to keep that area in use for all seasons. Eventually, the property will be renamed and the fee structure will be updated, including a discount for Pottawattamie County residents.

The county also purchased a 177-acre property with a 17-acre pond in 2004 that’s been held in a reserve life estate, but the resident recently passed away, so it will be incorporated into the development plans for the Hitchcock-Mt. Crescent project.

“That will also be incorporated into all the development that we’re going to be doing up there,” Shoemaker said. “We’re going to have some other opportunities up there as far as fishing and potentially some other overnight accommodations.”

As Pottawattamie County looks to grow housing for the region’s workforce, it is increasingly looking to the county’s 14 smaller communities outside Council Bluffs.

Wyant said the county worked on a housing study with the Iowa West Foundation identifying the housing needs to help apply for grants to pay for the infrastructure needed.

“You’re not going to see workforce houses in rural Pottawattamie County. The land prices just won’t allow for that,” Wyant said, adding that new housing is likely to be $400,000 or higher per home to justify the expense.

The supervisors were asked about how they’re spending the windfall of property tax revenue from climbing valuations. Supervisor Brian Shea said inflation offsets much of the growth. Wichman said the board has been responsible.

“It’s really a difficult job when budget session comes along, when you know what your hard costs are, your employees, and what it takes to run the county and provide the service you expect, and then we try to give some back to the taxpayers,” Wichman said.

He summed up the board’s efforts: “We’ve worked really hard, did a pretty good job.”

Schultz said the expected growth in valuations probably won’t be there next year, at least not enough to keep up with expected increases in employee compensation.

“It’s a very, very difficult balance that we have,” he said. “Looking forward in the next five years, if we don’t start seeing significant tax base growth of some kind, that’s going to be a pretty scary thing to think about. Valuations can only take you so far.”

Pottawattamie County by the numbers

Pottawattamie County has 15 cities, including part of Shelby, with a population of 93,000 people. The county government has 21 departments, including elected offices, with more than 400 employees.

"We have over 300 bridges, although those numbers are dwindling every year as we replace old bridges and put in culverts that require a heckuva lot less maintenance," he said. "We also have around 1,700 culverts in Pottwattamie County."

A longtime friend and a local bank are looking after the estate and finances of "American Picker" Frank Fritz as he continues to recover from a stroke.

7 charts that show where home sales are headed in Iowa

Are prices headed up or down? Where are the hotspots for buyers and sellers? Find out with these charts and graphs, updated weekly.

A search of the vehicle revealed 17 pounds of suspected cocaine and dozens of unknown pills. The substances were located in a hidden compartment in the rear of the vehicle.

Your Views: Many thanks; animal cruelty

Thanks to community for Heritage

All About Eyes: Shingles and the Eye

Shingles of any type is believed to affect around 1 in 3 people in their lifetime and it’s estimated that up to 1 million new cases of shingles will occur in the United States each year.

Study: Be kind, it's actually good for you!

Study: Be kind, it's actually good for you!

'I send money to a lot of people': Herschel Walker responds to check woman claims was for abortion

'I send money to a lot of people': Herschel Walker responds to check woman claims was for abortion

Look to the sky, it's space month! What you can see in the sky during October

Look to the sky, it's space month! What you can see in the sky during October