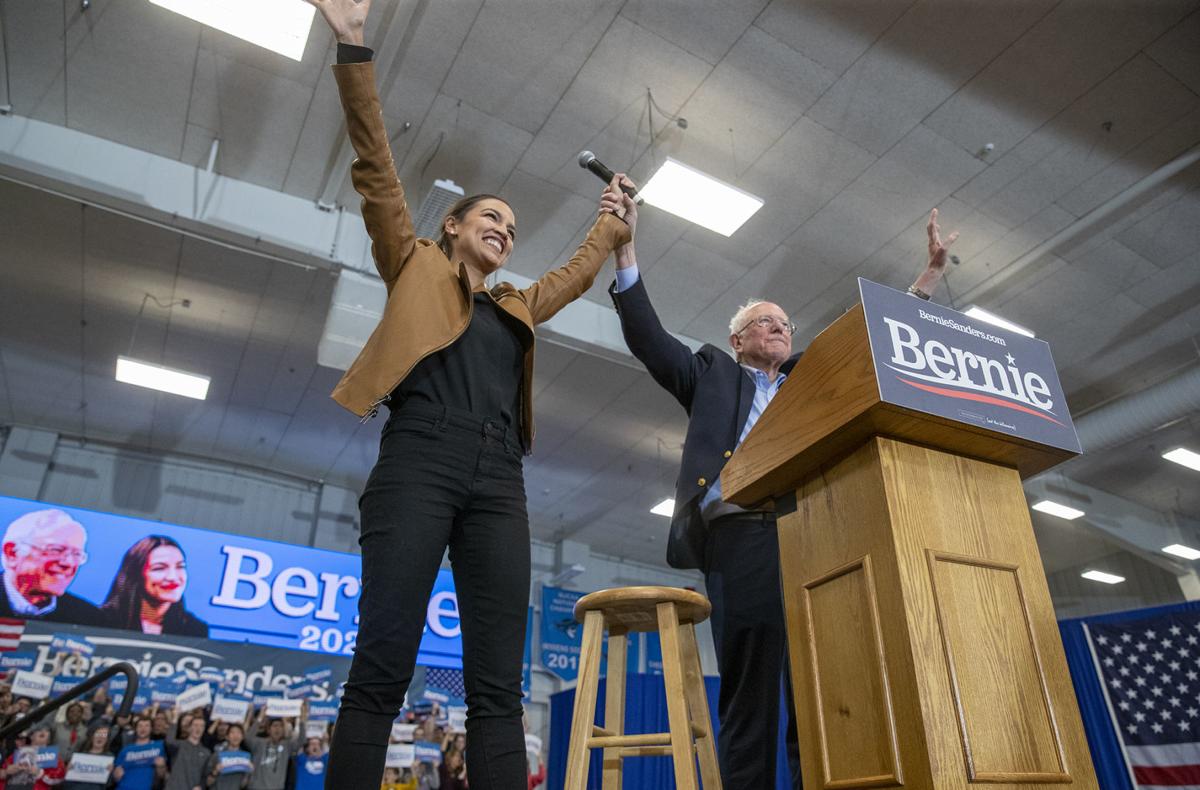 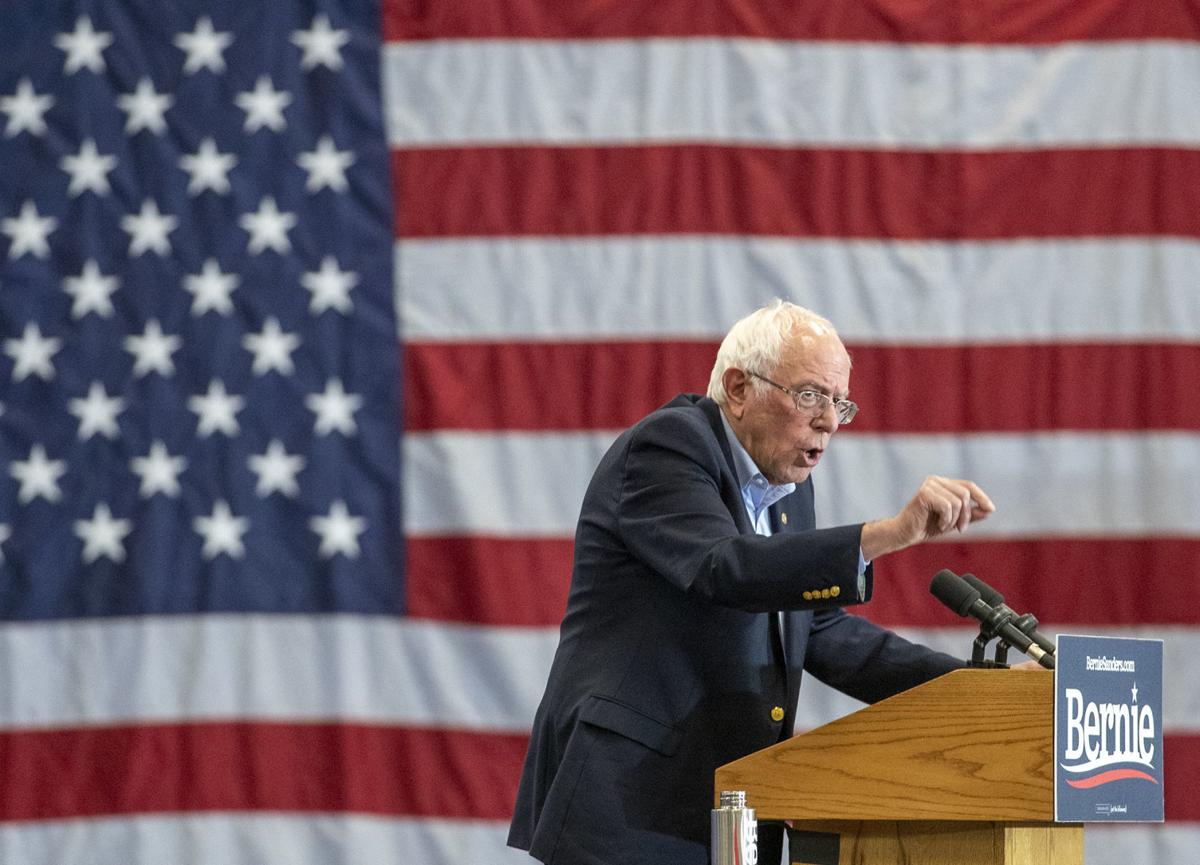 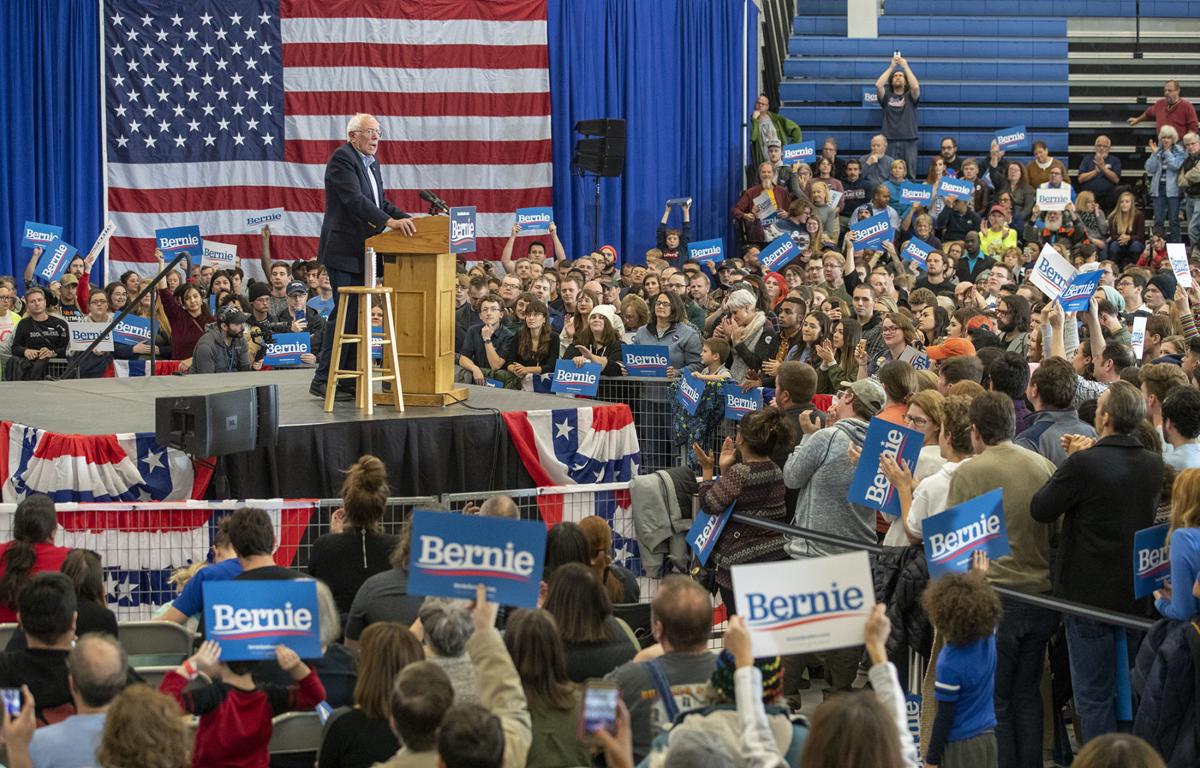 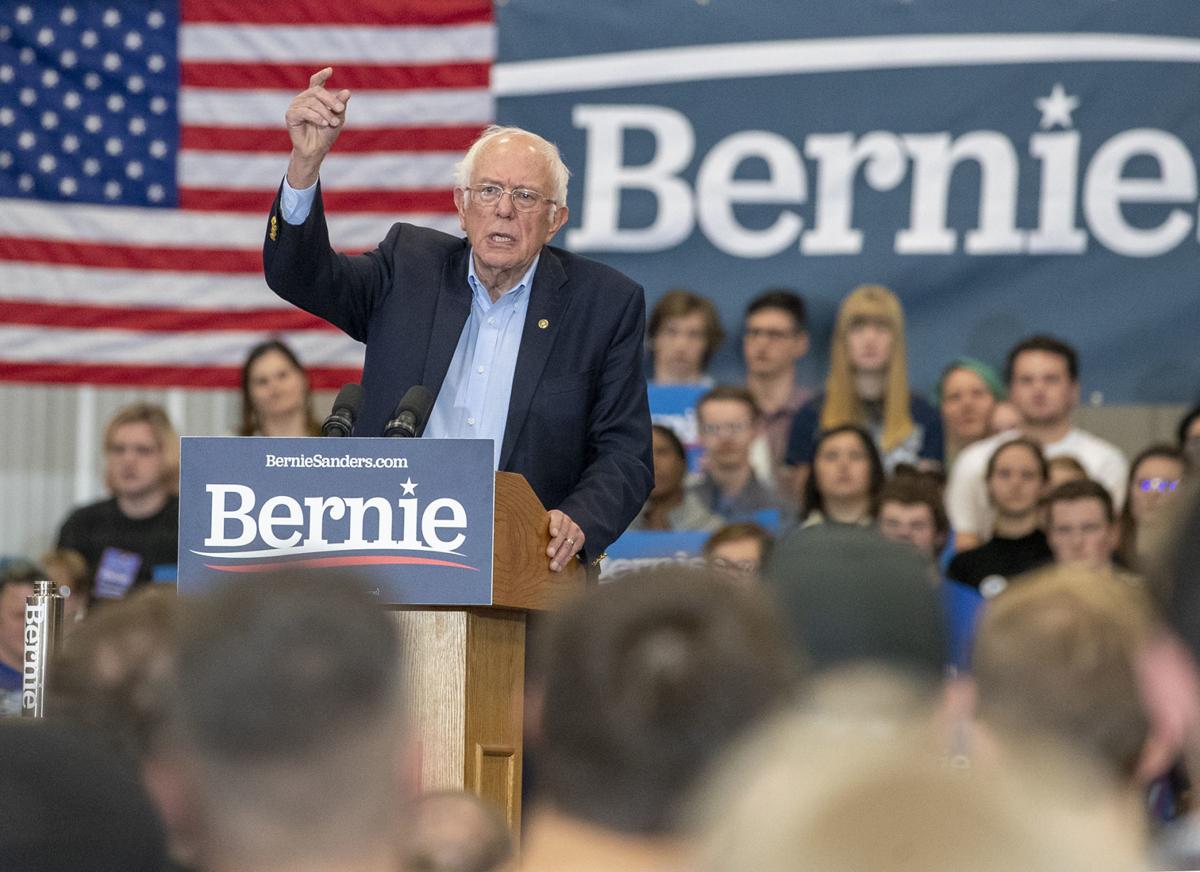 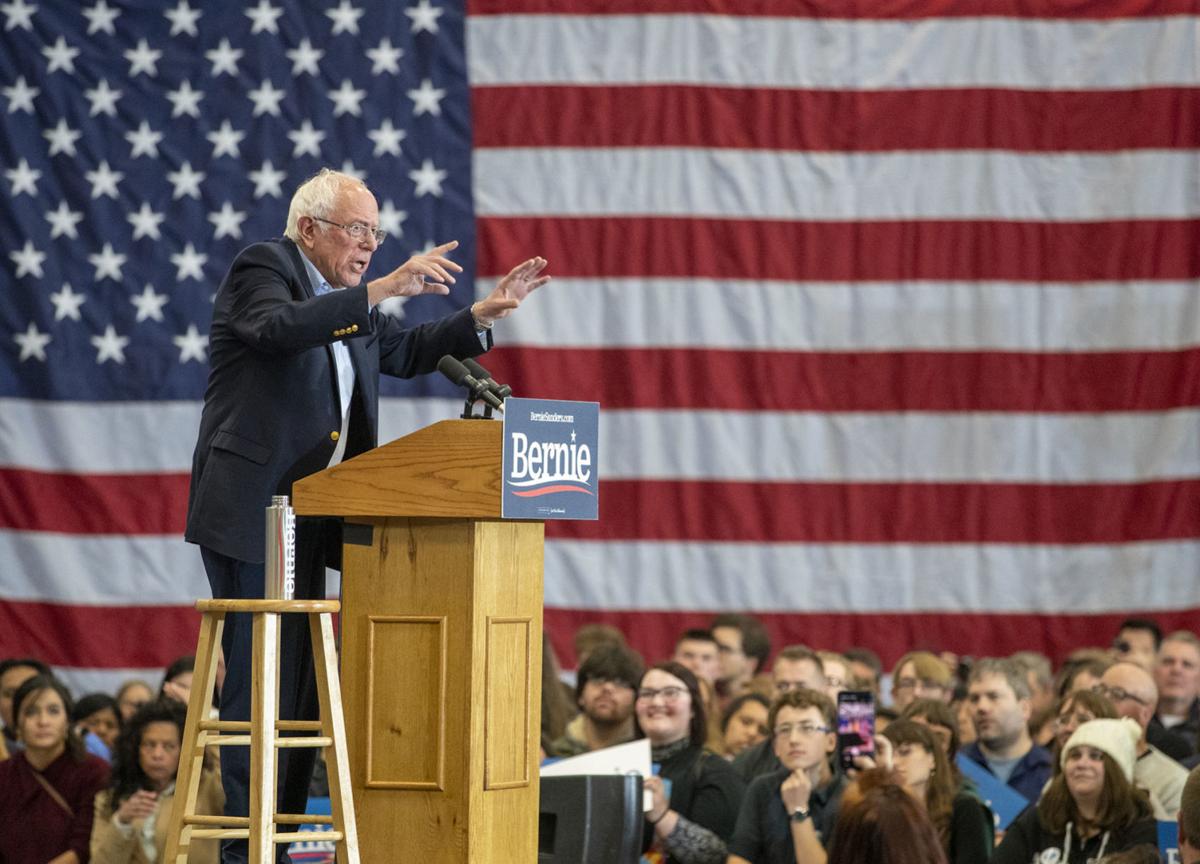 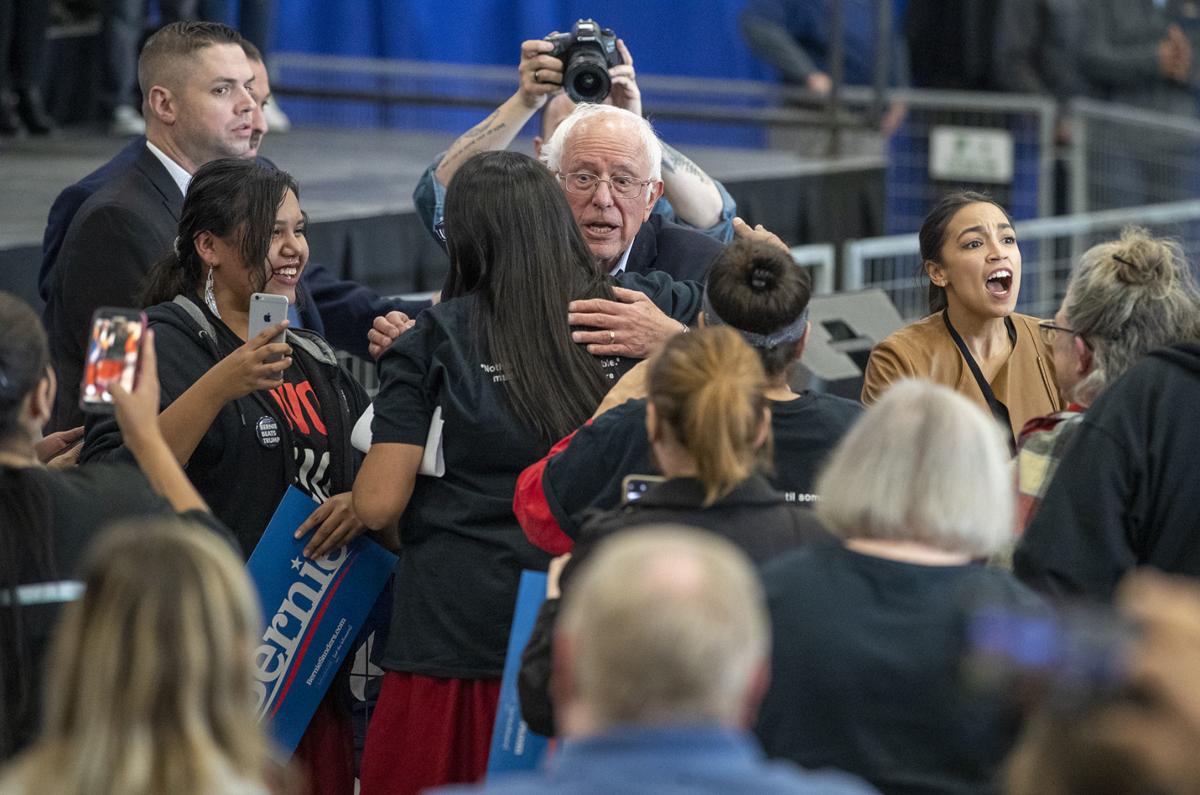 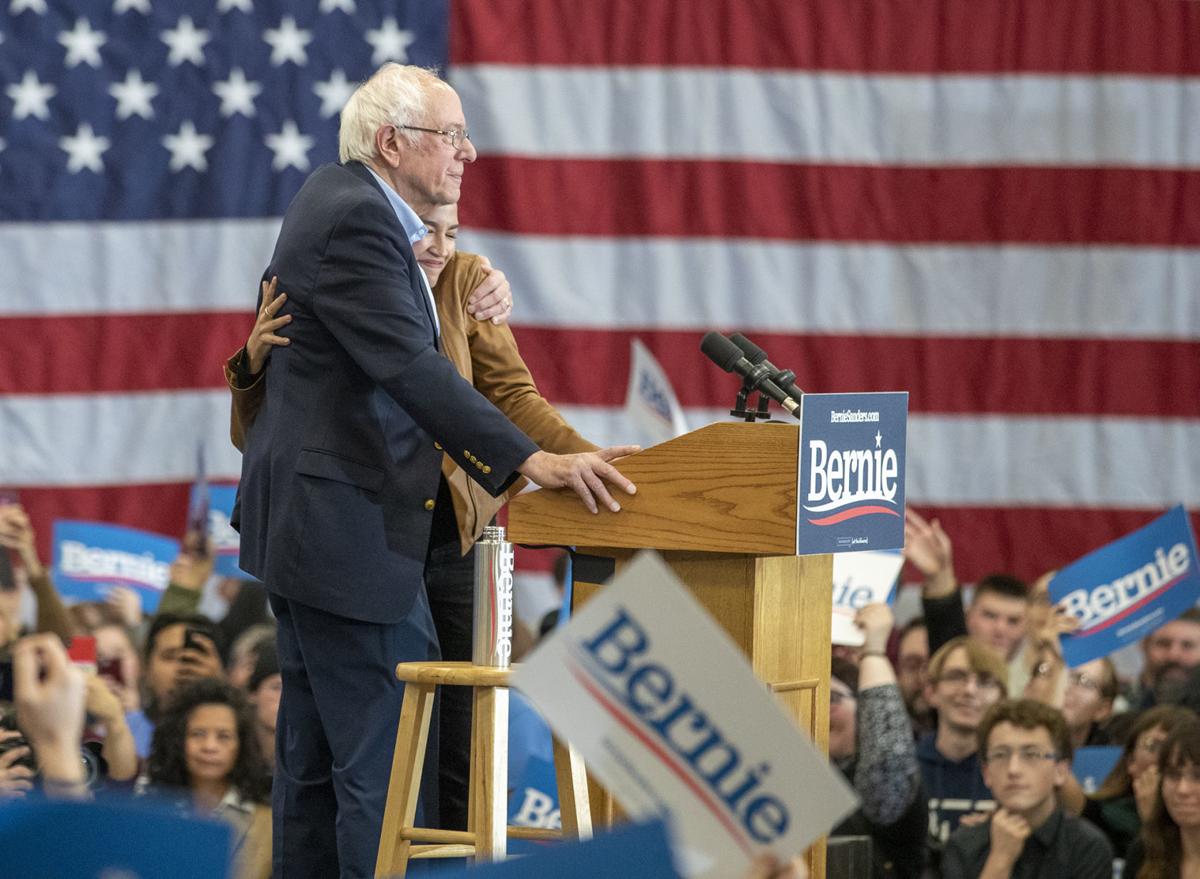 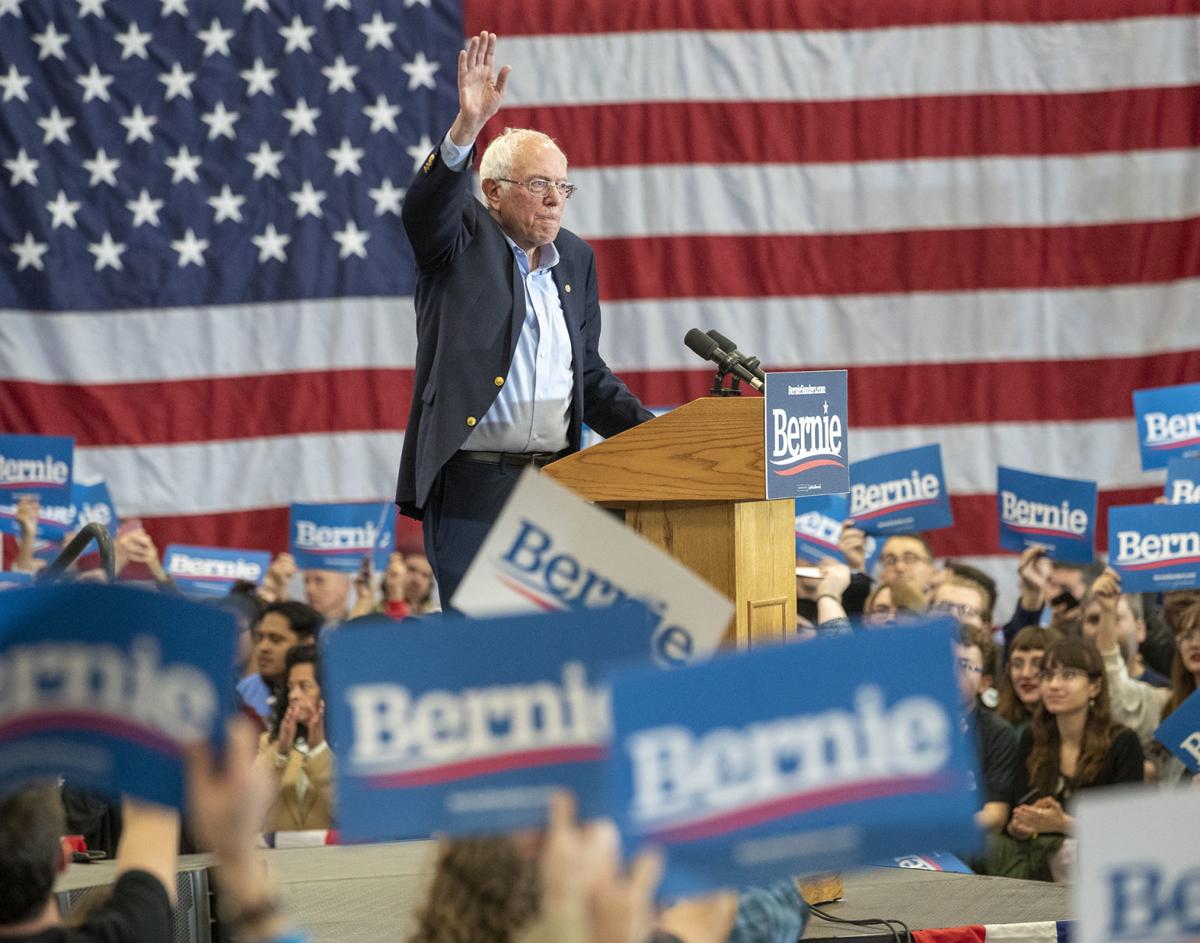 Democratic presidential candidate Bernie Sanders waves to the crowd during a rally inside Reiver Arena at Iowa Western Community College on Friday, Nov. 8, 2019. 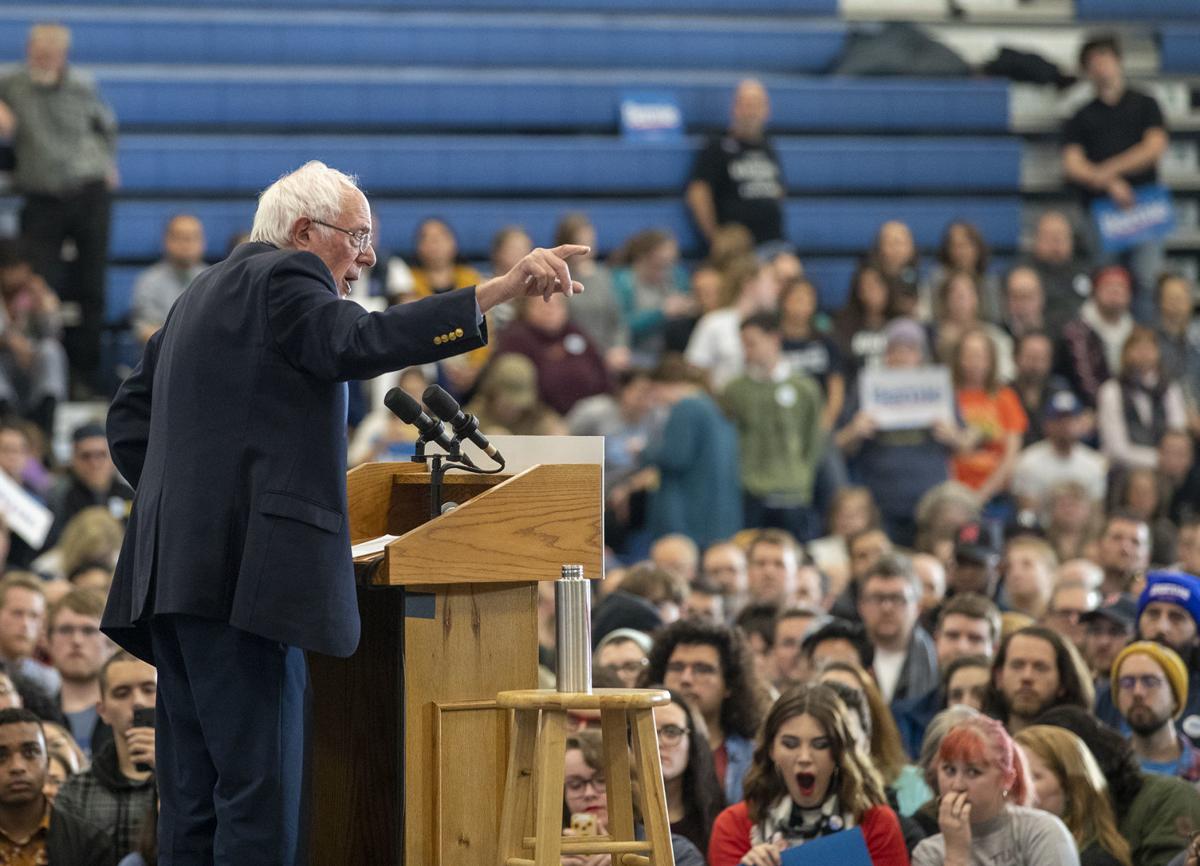 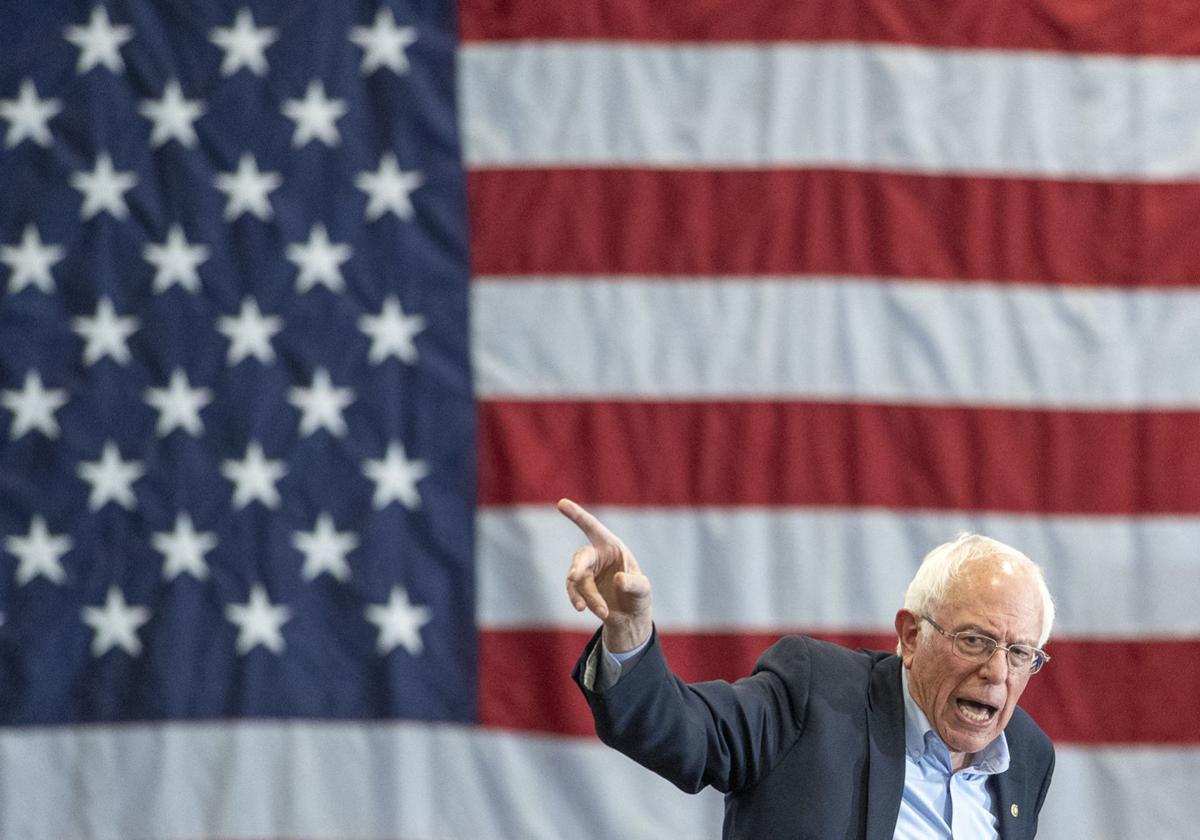 Democratic New York Rep.Alexandria Ocasio-Cortez, who publicly endorsed Sanders for president three weeks ago, joined him on his campaign stop in Council Bluffs, rallying the crowd of several thousand people. She urged supporters not to sit on the sidelines but to get involved.

“This is not a movie, it is a movement,” she said. “We don’t watch the polls, we change the polls.”

Ocasio-Cortez implored listeners to not just participate in Iowa’s first-in-the-nation caucuses but to take others with them.

She then introduced Sanders, who took the stage around 6:35 p.m. and talked about his trademark issues, including perhaps the best known, Medicare for All.

The government would offer training to current employees in the insurance industry, of which Omaha has thousands, so they could transition to work in the Medicare program, he said.

“That’s why half a million people go bankrupt each year because of medical bills,” he said.

Sanders added that he would expand Medicare to include dental care, eyeglasses, hearing aids and home health care. The age to qualify would gradually be lowered over a four-year period to include everyone.

The government should pay all past-due medical bills, which would cost an estimated $81 billion, he said.

The senator also wants to take on homelessness in America.

“We will build up to 10 million livable, affordable houses,” he said.

“We believe education is a human right, from preschool to graduate school,” he said.

And it’s time to cancel all student debt, Sanders said. People have asked how the federal government could afford to cancel an estimated $1.6 trillion in debt.

“We pay for that through a modest tax on Wall Street speculation,” he said.

“But 99.9% of the American people would not be affected by that,” he said.

On climate change, Sanders said, “We have proposed the most comprehensive climate change plan ever introduced by any candidate for office. We have a moral responsibility to make sure this planet is inhabitable by our kids and for future generations. That is why we are going to take on the greed and corruption of the fossil fuel industry and, whether they like it or not, we are going to transform our economy to renewable and sustainable energy and create 20 million jobs in the process.”

He has called for a public investment of $16.3 trillion to combat climate change. He would fund that, in part, by ending tax breaks and subsidies for the fossil fuel industry and generating income by building wind and solar farms and other green power plants and selling the electricity to power plants across the country.

“When we talk about climate change, all we are doing is listening to the scientists,” Sanders said. “I don’t know how you put a price tag on saving this planet.”

Added Ocasio-Cortez, “When we talk about climate change, we don’t have a choice on what we spend. The question is not are we going to expend the money, it’s about how we are going to spend the money.

“The question is, are we going to spend that money on preventative measures and decarbonization of our economy so that our children don’t have to be recovering from disasters their entire lives, or are we going to continue down this dangerous path of ignoring the problem and then not knowing which family will be next and who will be devastated next?”

Sanders’ campaign is about thinking big, he said.

“The only way real change can take place — has ever taken place — is for it to happen from the bottom up, not the top down.”

A motorcyclist has died from injuries suffered in a wreck on Veterans Memorial Highway in Council Bluffs.

A 2-year-old girl died Saturday after being hit by a car pulling into a driveway in Council Bluffs, police said.

Police have released the name of a motorcyclist that died following a wreck on Veterans Memorial Highway in Council Bluffs.

Police have released the name of a motorcyclist that died following a wreck on Veterans Memorial Highway in Council Bluffs.

A 23-year-old Omaha woman died following a Thursday single-vehicle accident on Interstate 29, according to a news release from the Council Blu…

Police: Man attempts to strangle himself with seatbelt in back of CBPD cruiser

Early Tuesday morning a Bellevue, Nebraska, man attempted to strangle himself with a seatbelt while in custody of Council Bluffs Police office…

Fast-food restaurant manager sent to prison for stealing $30,000 from company

Jacobo died Sept. 13 at age 90 of natural causes at an Omaha hospital. The family held a celebration of his life at a local mortuary.

Democratic presidential candidate Bernie Sanders waves to the crowd during a rally inside Reiver Arena at Iowa Western Community College on Friday, Nov. 8, 2019.