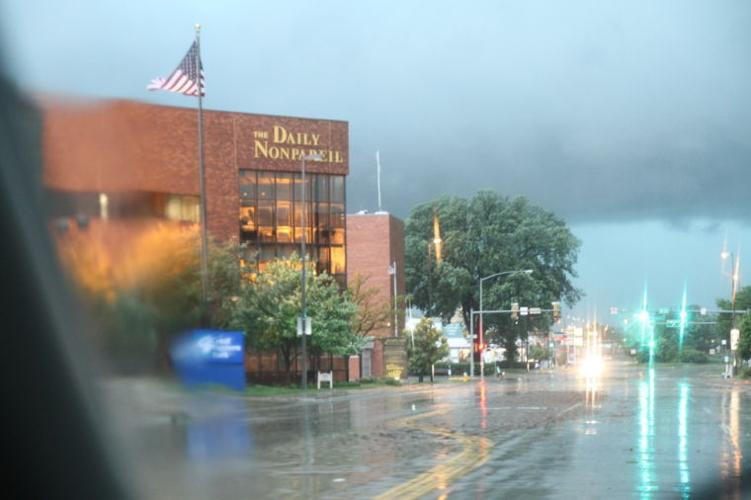 A storm cloud hangs over The Nonpareil office. 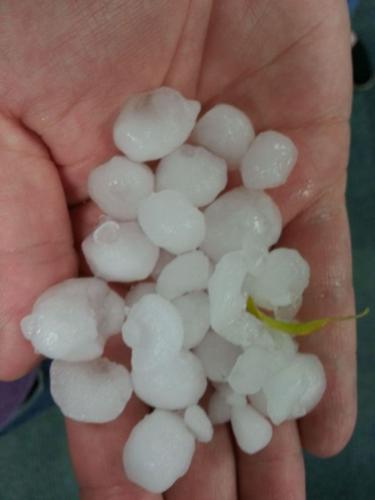 This collection of hail was found outside The Nonpareil more than an hour after the first round of it battered Council Bluffs.


Severe weather in Council Bluffs and southwest Iowa has left approximately 9,100 MidAmerican Energy customers without power with a peak of more than 10,000, caused flash flooding throughout the area and more.

Drivers are advised to not drive through high water.

According to police scanner reports:

• Widespread street flooding in the west end in Council Bluffs.

• A woman called from the flooded main level of the Alegent Creighton Health Mercy Hospital parking garage, reporting she was trapped in her sport-utility vehicle, with her child inside. When a reporter arrived, however, nobody was there.

• A van was submerged near the Juvenile Detention Center near the South Expressway in Council Bluffs, with an officer saying a man inside appeared to be OK.

• An officer reported seeing cars with floodwaters over the hood at 10th Street and Avenue G.

• Power poles snapped and knocked over into the road near Railroad Highway (Highway 191) and County Road L34.

• Report of a multi-vehicle crash on Interstate 29.

• Report of a house fire at 18th Street and Fourth Avenue.

• Power lines down in the 300 block of North First Street.

• Report of a siding and roofs ripped off houses and motels in Missouri Valley.

• Bricks on the roadway from between the 100 Block and Alegent Creighton Health Mercy Hospital.

Davenport toddler dead from fentanyl both parents in custody

The parents of 22-month-old Antonio Akright are charged in what Davenport investigators say was his death by fentanyl overdose.

A Council Bluffs man has won a large lottery prize for the second time in three months.

Urban chickens are still a hot topic for members of the Pottawattamie County Board of Supervisors.

The explosive impact of Omaha's underworld

While no one was charged in the 11 incidents, and the next few years were relatively calm, the summer of 1938 brought a “war” and a new spate of bombings.

The Community Foundation for Western Iowa, through the Women’s Fund of Southwest Iowa, awarded grants totaling $45,000 to four Council Bluffs …

Molly Stogdill has been named program director of Kids & Company, the before- and after-school childcare program that serves students and …

A storm cloud hangs over The Nonpareil office.

This collection of hail was found outside The Nonpareil more than an hour after the first round of it battered Council Bluffs.