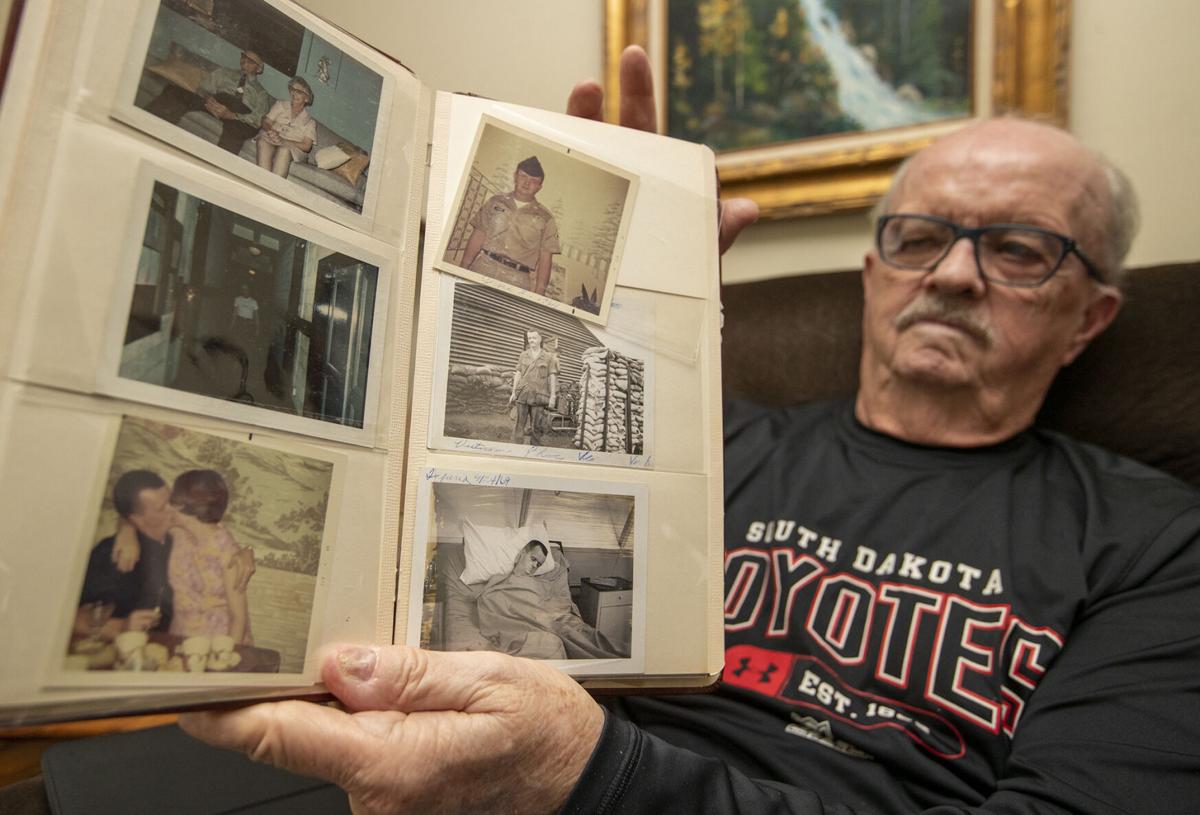 U.S. Army and Vietnam War veteran James Thrane, 77, holds up a book of photos from his time in the service inside his Glenwood home. 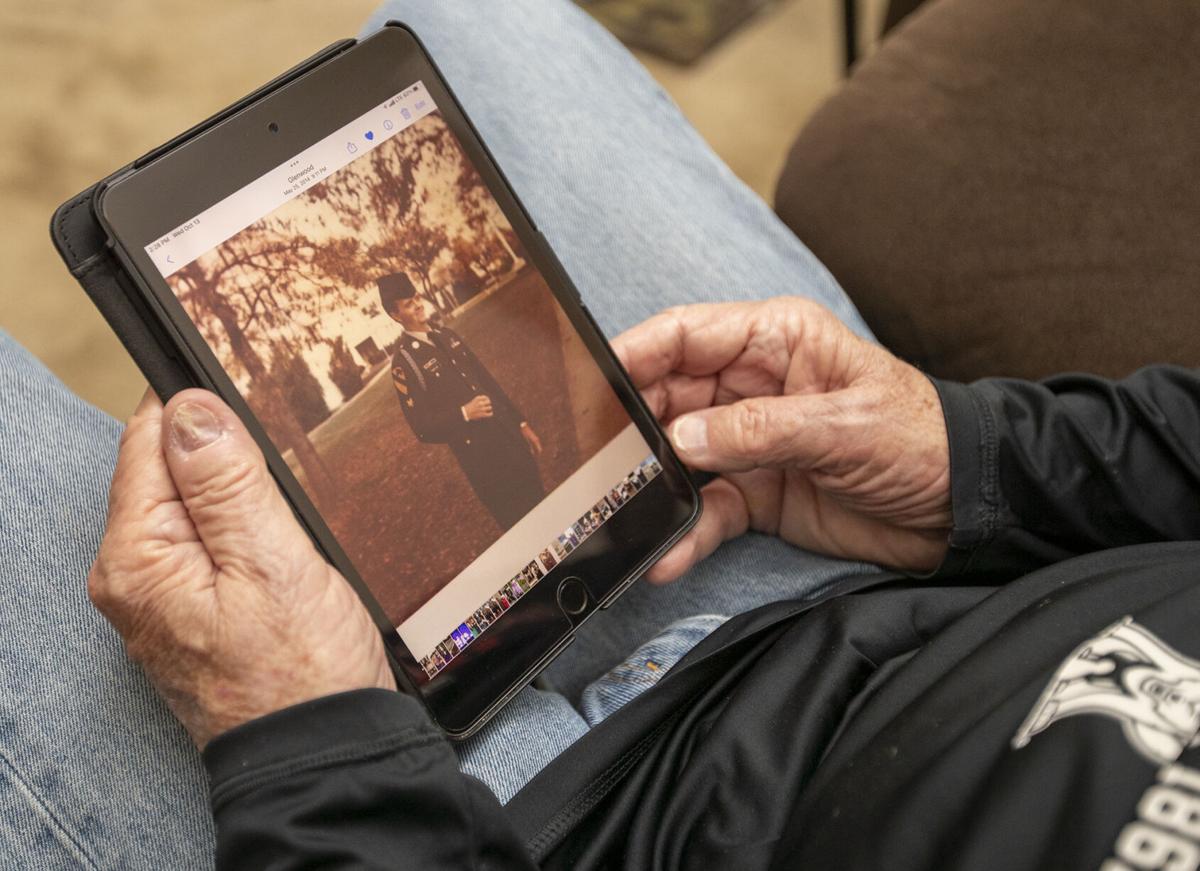 U.S. Army and Vietnam War veteran James Thrane, 77, looks at a photo of himself arriving at Travis Air Force Base in California following a stint in a series of Tokyo hospitals from being injured in the war. 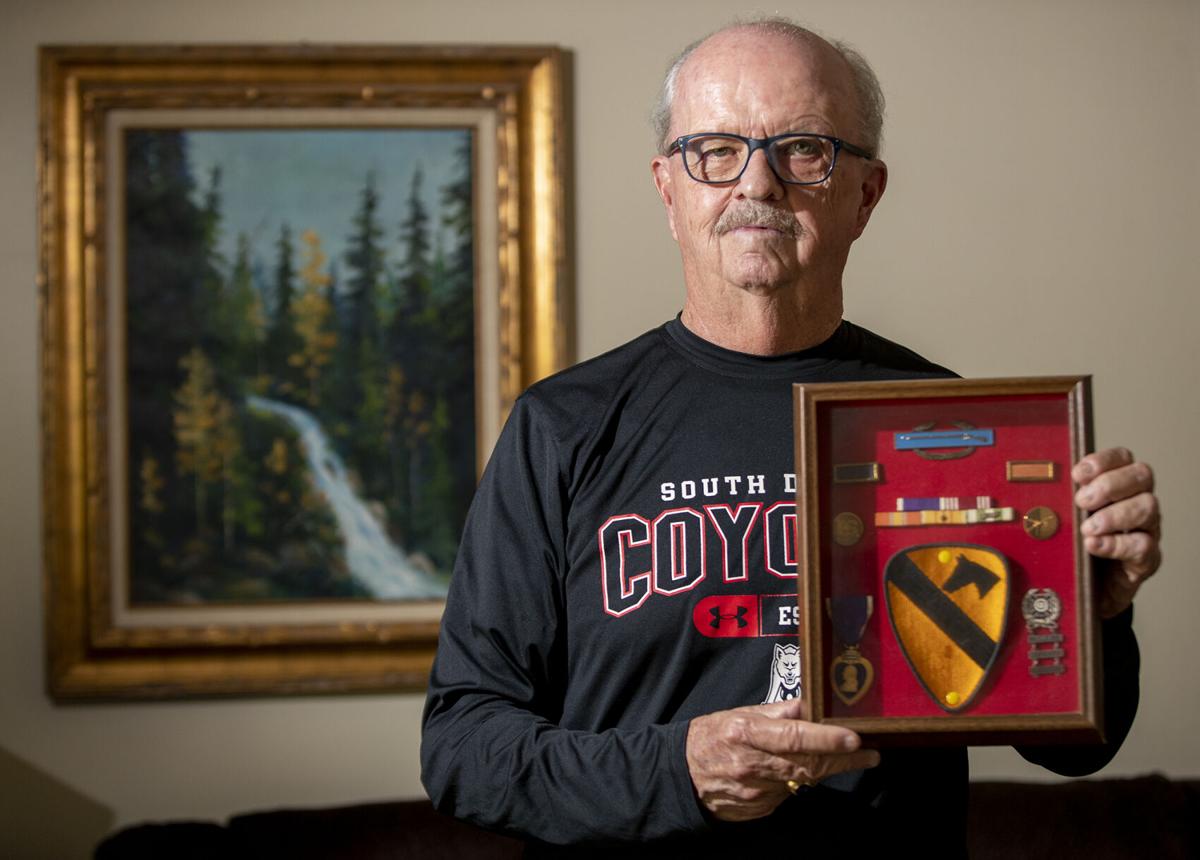 U.S. Army and Vietnam War veteran James Thrane, 77, poses for a portrait inside his Glenwood home holding a Purple Heart and other honors he received during his service.

James Thrane, 77, of Glenwood, who served in the U.S. Army during the Vietnam War, said he was “very honored” to be chosen.

“I was very surprised and very excited about the idea,” he said.

Thrane grew up in Council Bluffs and graduated from Abraham Lincoln High School, then earned a bachelor’s degree in recreation/exercise science at the University of South Dakota.

Thrane’s father served in the Army during World War II, but Thrane was initially interested in the U.S. Air Force. He tried to sign up but was told he was needed in the Army. He enlisted on July 3, 1968, and reported to Fort Dix in Pemberton, New Jersey for basic training.

After that, he was sent to Fort Polk, Louisiana for advanced infantry training, where he qualified on rifle, automatic rifle and machine gun. After some additional training, he was deployed with the 1st Cavalry Division to Tay Ninh Province in southern Vietnam near its border with Cambodia. He served as the point man for his platoon for three months, then was sent to sniper school.

But Thrane’s days as a sniper would be few.

“I was a sniper for four days,” he said.

On the night of Sept. 24, 1969, Thrane’s unit was supposed to be in a landing zone that was considered a relatively safe area. It was where paratroopers landed when forces were sent in. But another group was already there, so they stopped about 1,000 yards away.

“The Ho Chi Minh Trail came right through our area, and that was a main route for North Vietnamese infantrymen,” he said.

Suddenly, Thrane’s unit started taking mortar fire, so he and four other men dived into a foxhole — but not before he was hit in the head and arm by shrapnel.

The mortar attack had come from the landing area — it was friendly fire.

The shrapnel had nicked the carotid artery in Thrane’s neck and severed the brachial artery in his arm. Surgeons transplanted veins from the area surrounding his brachial artery to rebuild the vessel. It was a relatively new procedure, and doctors told him if he had suffered the same injury a few years earlier, his arm probably would have been amputated.

Thrane spent the next two-and-a-half months in a series of different hospitals in Tokyo, Travis Air Force Base in California and Denver.

On Jan. 1, 1970, he was sent to Fort Hood, Texas to serve as a company clerk. He actually would have preferred to be an infantryman.

“I really hated typing,” he said, but that was one of his duties, “plus driving the first sergeant wherever he had to go.”

Soon afterwards, Thrane married his girlfriend from USD as planned, and the couple moved to the St. Louis area. There, they had a son, and Thrane tried several different jobs. Seven years later, dissatisfied with those career options and newly divorced, he moved back to Council Bluffs.

Although not certified, Thrane got a job teaching physical education at the Glenwood Resource Center, then known as the Glenwood State Hospital and School. He stayed there for 12 years, when the state decided intellectually challenged children should be educated in a less restrictive setting.

“They had all the students go to public school, and I got laid off,” he said. “My folks said ‘Why don’t you go back to school and become a teacher?’ I said ‘That sounds like a good idea.’”

Thrane took classes from the University of Iowa through a program at Iowa School for the Deaf and became certified in special education. In 1990, he married Ann Hetrick, who had two sons from a previous marriage. They have now been together for 31 years.

He started his career as a special education teacher at CJ Futures, a private school in Logan. When that closed only six months later, he got hired at the Alpha School, a school for students with behavior disorders in Omaha, where he taught for more than two years.

He spent the last 12 years of his teaching career as a special education teacher at Glenwood Community Schools. He also coached eighth-grade football for a few years and girls soccer for nine years. His last year, he got to teach two periods of physical education, along with special education. He retired in 2011.

Thrane is a member of Vietnam Veterans of America, Chapter 798; Veterans of Foreign Wars, Rommel-Conklin Post No. 7064; and American Legion, Harvey T. Rimel Post No. 141.

Between him and Ann, they have five grandchildren and two great-granddaughters.

For more information on the parade and how to register an entry, visit councilbluffsveteransdayparade.org.

Leslie Coleman, CEO of NeighborWorks Home Solutions in Council Bluffs, thanked the City Council and Community Development Department for their…

Temps in the 50s will end the weekend for the Council Bluffs-Omaha area.

Besides collecting blood for life-giving transfusions, the American Red Cross responds to disasters and global conflict, according to the agency.

U.S. Army and Vietnam War veteran James Thrane, 77, holds up a book of photos from his time in the service inside his Glenwood home.

U.S. Army and Vietnam War veteran James Thrane, 77, looks at a photo of himself arriving at Travis Air Force Base in California following a stint in a series of Tokyo hospitals from being injured in the war.

U.S. Army and Vietnam War veteran James Thrane, 77, poses for a portrait inside his Glenwood home holding a Purple Heart and other honors he received during his service.