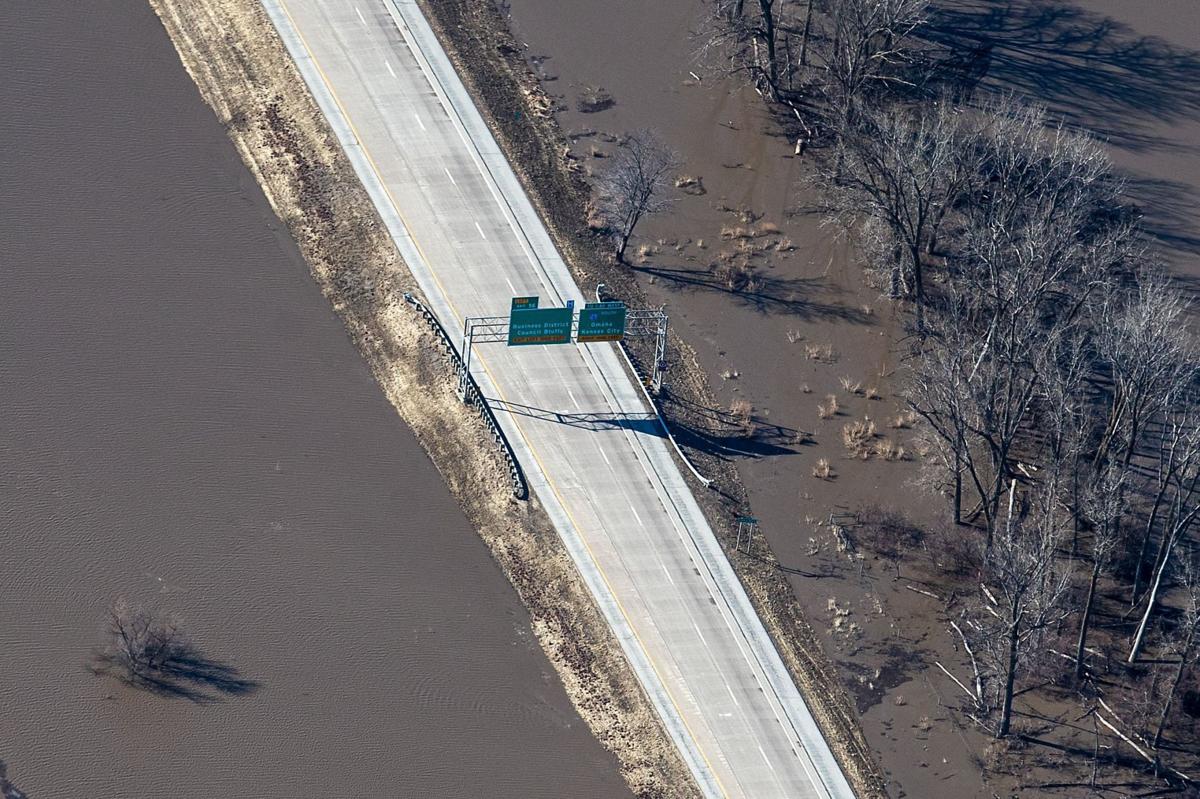 Interstate 29 in Council Bluffs was surrounded by water last spring. Missouri River flooding closed stretches of I-29 in March 2019 and in 2011. 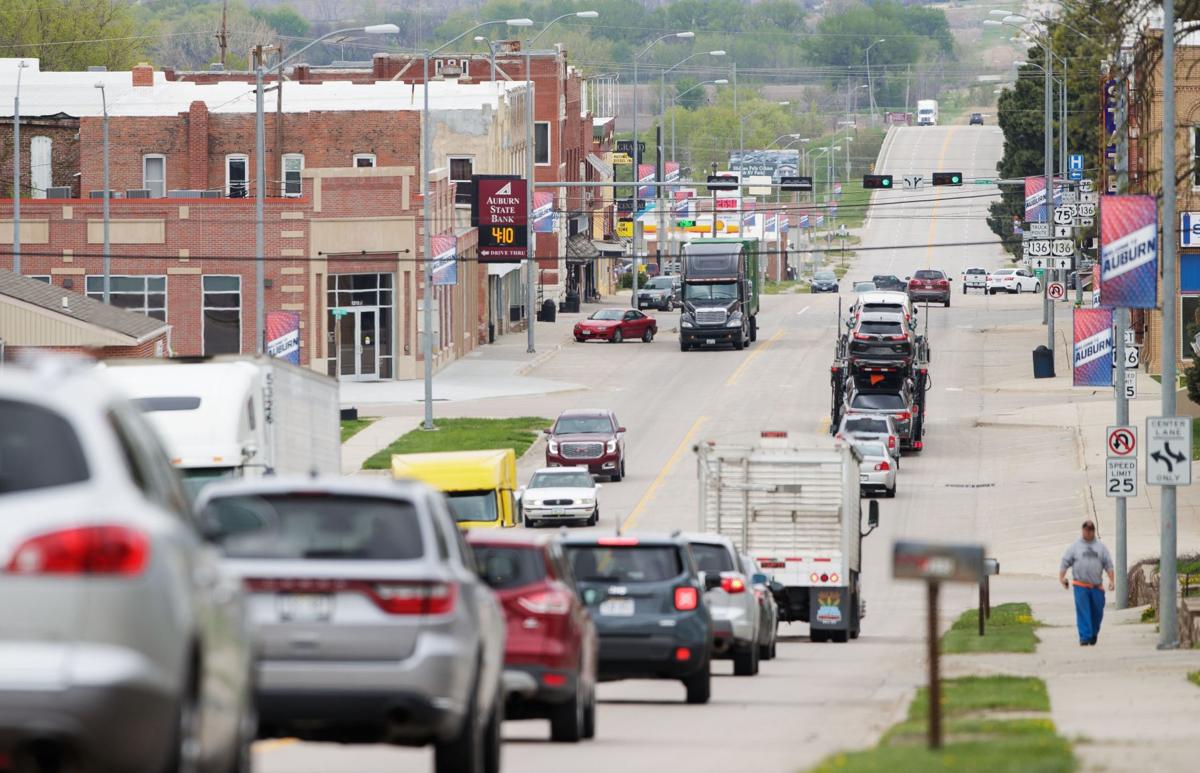 Heavy traffic moves along U.S. Highway 75 in Auburn, Nebraska, in April 2019. The closure of Interstate 29 increased traffic in small towns on the highway. 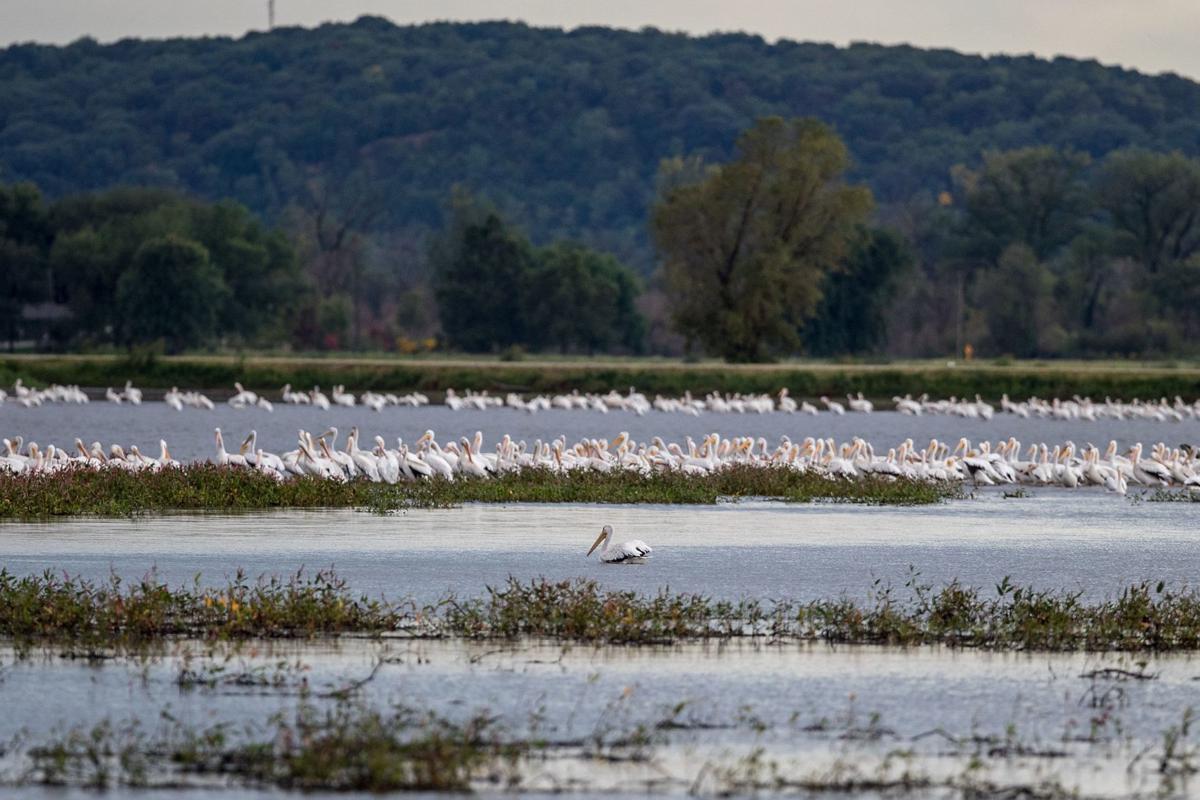 Pelicans gather in the floodwaters next to Interstate 29 near Honey Creek in September 2019. I-29 was closed there for a total of 100 days last year.

From his office in Nebraska City, Dan Mauk can hear the pile drivers across the Missouri River, pounding steel beams into bedrock for a set of bridges in the Iowa flood plain.

It’s been music to his ears.

Last year, historic flooding shattered roads and levees across the region. The many closures disrupted lives, made travel more dangerous and dealt a blow to the regional economy.

Interstate 29 in Iowa and bridges in Nebraska and Iowa were closed multiple times from mid-March until early October. Nebraska City, a town of 7,100, was cut off from I-29 and neighboring communities in Iowa for a total of 124 days after Iowa Highway 2 flooded shut.

“It was pretty rough last year,” Mauk said. “We’re crossing our fingers for this year.”

That pounding that Mauk is hearing?

It’s a $34 million investment in reducing the likelihood that Highway 2 floods shut. The Iowa Department of Transportation is building a set of bridges over a low spot in the Missouri River flood plain. Road work being done elsewhere in the Missouri River Valley is elevating flood-prone sections of I-29 and reinforcing the shoulders of Interstate 680.

Despite these improvements, the system remains vulnerable:

“We’re aware there may be problems, and we’re monitoring everything,” Scott Suhr, transportation planner for District 4, said of concerns on the Iowa side. “At this time, there’s not a risk. We hope it stays that way.”

In 2011, the Iowa Department of Roads rebuilt I-29 and I-680 back to normal, but after 2019, the department decided to shore up the weakest links, Suhr said.

Austin Yates, the District 4 traffic operations engineer in Council Bluffs, provided the following update on the roads system in Iowa:

I-29 near Honey Creek

Damaged levees allowed floodwater to pool in a low spot in this area. The highway was shut down four times from March 14 to Oct. 7, for a total of 100 days, Yates said. To eliminate the low spot, the Iowa Transportation Department elevated about a mile of northbound I-29 an average of 14 inches, he said.

The Interstate runs across the Missouri River Valley, so it is directly in the path of strong currents during flooding. After the March 2019 flood, the Department of Transportation decided to armor the sides of the Interstate to reduce the threat of erosion.

I-680 was closed three times last year for a total of 38 days from March 14 to Sept. 27. The Department of Transportation began placing Flexamat, concrete matting, on the shoulders of I-680 after the first round of flooding but had to stop when the river rose again.

Flexamat is used in coastal areas, and it proved itself on I-680 in the subsequent rounds of flooding, Yates said. I-680 was able to reopen in 2019 without the complete reconstruction required in 2011. Flexamat has also been placed along the interchange of I-680 and I-29.

I-680 also has several culverts that will allow floodwater to pass on downstream.

I-29 in north Council Bluffs

About 1,000 feet of I-29 in north Council Bluffs, between the 25th and 16th Street exits, has been vulnerable to flooding. It was covered with water for only a few days last year, but that was enough to cause problems in Council Bluffs because Interstate traffic was routed through a residential neighborhood.

Both northbound and southbound lanes were raised, in some areas as much as 28 inches, Yates said. If a closure is necessary this year, this improvement allows the department to route traffic onto 16th Street, an arterial road that can better accommodate heavy traffic.

The most vulnerable area on this highway that crosses the Missouri River is a low spot on the Nebraska side. The Nebraska Department of Transportation isn’t expecting Highway 34 to flood, said Jeni Campana, a spokeswoman. “But it’s an area we’re watching.”

Because of an unusual design, going into 2019, the levee protecting an elevated Highway 2 roadbed on the Iowa side jutted into the Missouri River Valley in a horseshoe fashion. This created a pinch point, or narrowing of the river valley, and was blamed for worsening flooding by backing up water from Highway 2 upstream to the Platte River.

The roadbed has been removed and is being replaced by bridges across the flood plain. (With the roadbed gone, the levee could be straightened, which eliminated the horseshoe pinch point). As a result, floodwater will be able to flow downstream under the bridge instead of backing up behind an obstruction. Traffic is already moving on the eastbound bridge. The westbound bridge is expected to open in June.

Three interchanges are still closed in southwest Iowa: the Bartlett, McPaul/Thurman and Percival exits. Those closures are due to heavy damage to county roads, not problems with I-29, Yates said. The traveling public is not as affected by these closures as are the communities along the Interstate. That’s because gas stations and restaurants weren’t right at the interchanges before the flood.

The state will reopen the interchanges when the county roads are repaired. Until then, exiting traffic would have nowhere to go, so the ramps are being kept closed.

What are ‘15-minute cities’ and how will they change how we live, work and socialise?

What are ‘15-minute cities’ and how will they change how we live, work and socialise?

How the airline industry is approaching employee vaccinations

How the airline industry is approaching employee vaccinations

Council Bluffs Schools has received offer on Madison Campus; views differ on whether to sell

The Council Bluffs Community School District has received an offer on the Madison Campus property, officials announced during a hearing on the…

An administrative law judge has upheld the Council Bluffs City Council’s liquor license denial for Cube Ultra Lounge on the 100 Block, which i…

Riverside to induct six alumni, one athletic team into Hall of Fame

Riverside Community School District will add six alumni and a softball team to the Riverside Hall of Fame this week.

Although New York is more than 1,200 miles away, the Tinley family of Council Bluffs was personally touched by the terrorist attacks of Sept. …

On Saturday morning, firefighters from across the region — including Council Bluffs Fire Captain Rob Schoening, and his son, Jack Schoening, a…

The lawsuit alleges that Creighton "refused to consider or grant religious exemptions" in mandating the vaccine for all students.

Interstate 29 in Council Bluffs was surrounded by water last spring. Missouri River flooding closed stretches of I-29 in March 2019 and in 2011. 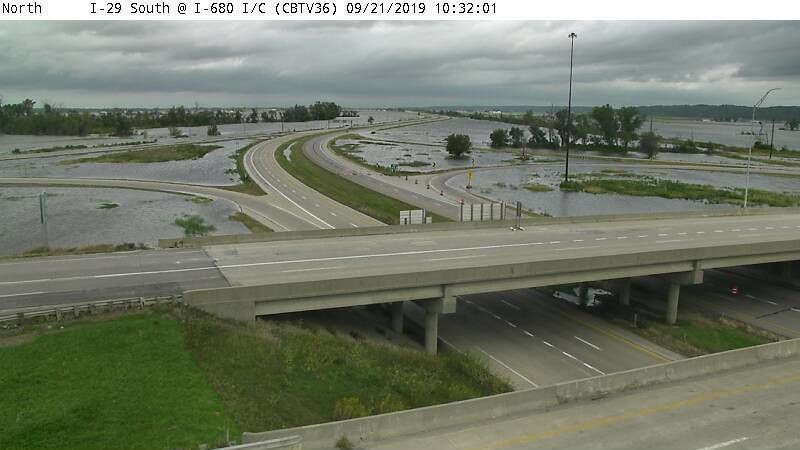 Flooding at the Interstate 29 and Interstate 680 interchange in September. 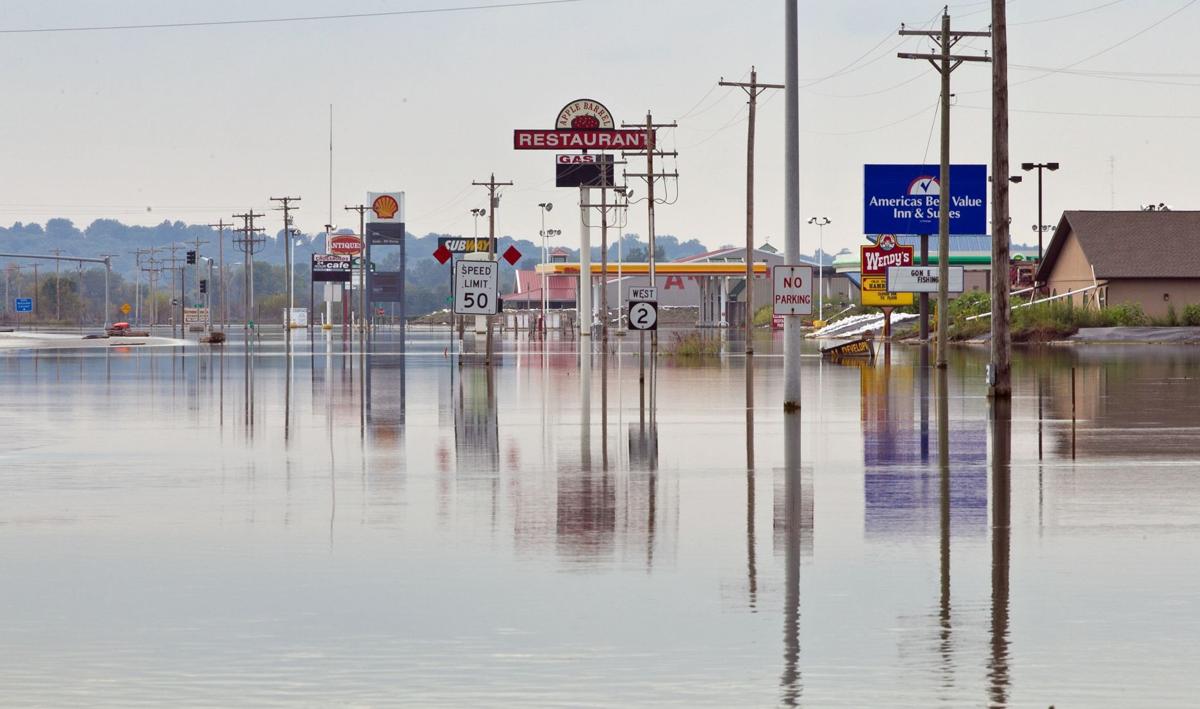 Heavy traffic moves along U.S. Highway 75 in Auburn, Nebraska, in April 2019. The closure of Interstate 29 increased traffic in small towns on the highway.

Pelicans gather in the floodwaters next to Interstate 29 near Honey Creek in September 2019. I-29 was closed there for a total of 100 days last year.