“A zoo.” “A circus.” Whatever you call it, Downtown Kenosha has it.

Locals and out-of-state folks, including one who said he flew in from California, were on hand outside the Kenosha County Courthouse on Wednesday to await a verdict in the Kyle Rittenhouse trial. But they were still outnumbered perhaps 3-to-1 by members of the media from all over the country.

Some were openly antagonizing those with opposite points of view. Others were more content to hold their signs or shout their chants without facing off with others.

“I’m just checking out the circus,” said one man, who declined to share his real name but said he was “from the area,” wearing a pro-Second Amendment hoodie.

“Defending yourself? That’s a right," he said in support of Rittenhouse as the jury deliberates the 18-year-old's fate for the second day inside the courthouse.

Emily Cahill, who said she’s from "Chicagoland," had her signs stolen and ripped up by pro-Black Lives Matter demonstrators after dark Tuesday. Wednesday morning, she was back, redrawing her sign that reads “BLM and Antifa are here 2 intimidate” in front of the courthouse steps. Both days she wore a U.S.A.-themed beanie hat.

She said she was in Kenosha the first night of protests after Jacob Blake was shot in August 2020, carrying a “Back the Blue” sign, and claimed to have been threatened that night.

“I know what Kyle went through,” she said Wednesday morning. “If I was in his situation, I would want to defend myself.”

Others said they were just there to watch, and sometimes to antagonize.

Thomas Heineman of Racine said he was there “to see the process” but also to “antagonize” Black Lives Matter demonstrators. He has been inside the courthouse and outside in Civic Center Park throughout the days of the trial, having twice been kicked out of the media room inside the courthouse.

On Tuesday, he picked on a woman who accused him and others of being white supremacists; Heineman responded by accusing her hair of being fake and called those with her "stupid" among other things.

“I just like to see the process. I like to see idiots, and get better and better at antagonizing people,” he said. “I call police 50 times a year … I don’t need to punch somebody’s (expletive referring to rear end). It’s a lot more fun to let the cops get ‘em.”

James Kerrigan of Illinois wore a red boa and jacket covered in sequins as he stood outside the courthouse Wednesday morning. He said when he’s off work he often goes to major trials within driving distance of his home, not to pick sides but just to watch — although Kerrigan said “I kind of support” Rittenhouse in this instance.

“I get to watch the action between defense and the prosecutors … I like the atmosphere. It’s kind of like a zoo out here,” Kerrigan said.

A man from California, Steve Stewart, said he flew through the night Tuesday to show his support for Rittenhouse outside the courthouse Wednesday. He believes Rittenhouse to be a hero, someone who defended property when — according to Stewart — politicians got in the way of police doing their jobs.

He said he’s “saddened” by the low turnout. He believes more people should have shown up from all over to “show support for the Rittenhouse family.”

“A lot of people who believe what I believe (prefer) to be silent and patient. That’s normally what I would be as well,” Stewart said. A professionally printed sign he held, side-by-side with Cahill, reads "You and I failed the U.S.A. and Kyle by not standing with Kyle during riots. D.A. and (Assistant District Attorney Thomas) Binger failed by prosecuting to appease a misinformed mob. Both should resign. Real men stand up when horrible politicians force police to stand down.”

Underneath Stewart's T-shirt was a protective vest.

Most prominent perhaps has been someone who only identified himself as Maserati Mike. With a bullhorn Tuesday and Wednesday, as the jury in the Rittenhouse trial continued deliberations, he yelled things like “Black Lives Matter is a terrorist organization!” and accused BLM of supporting pedophiles. On Tuesday, he had a dog — that appeared to be shivering either from cold or fatigue throughout the day — with him. Wednesday, the dog was nowhere to be seen but the bullhorn was back, as well as a long gun and a bowtie on underneath a flak jacket.

Guy calling himself Maserati Mike carrying a gun was talked to by #Kenosha Co. Sheriffs Deputies and left the scene (in his Maserati, btw). #KyleRittenhouse pic.twitter.com/RmfeKV9nQC

When confronted by Kenosha County deputies a little after 9:30 a.m. Wednesday for having a firearm without a concealed carry permit within 1,000 feet of the school, he left the area in a Maserati sportscar after speaking with officers.

In the early afternoon, he returned without the firearm.

Police confront the man for carrying a rifle within 1000 feet of a school, he says he does not have a CCW. Officers take him aside to ID him away from the media #Kenosha pic.twitter.com/GMpsxUB2qn

Other faces are more familiar, like Justin Blake and his Pan-African flag, and Bishop Tavis Grant of Chicago's Rainbow PUSH Coalition, who have shown peaceful support for those shot by Rittenhouse throughout the trial's proceedings and at demonstrations for more than a year leading up to it.

Watch now: Kyle Rittenhouse breaks down on the stand

Watch now: Kyle Rittenhouse says he 'did what he had to do' to stop threat

For the first time in half a year, U.S. families on Friday are going without a monthly deposit from the child tax credit. A closer look at the impact.

The CDC updated its mask guidelines. What to know about 'the highest level of protection'

Here's what you need to know about masks like N95s, where to get them and how to use them safely.

Authorities say a man apparently took hostages Saturday during services at a synagogue near Fort Worth, Texas. It wasn't clear how many people were in the building.

Prince Andrew's military affiliations and royal patronages have been returned to Queen Elizabeth II with her "approval and agreement," Buckingham Palace has announced.

The tests will be provided at no cost, including no shipping fee. The White House said "tests will typically ship within 7-12 days of ordering."

Omicron may be peaking in US; Biden sends more COVID tests to schools; plus more morning headlines

Things to know today: Signs show omicron may be nearing peak in U.S. with sharp drop in cases predicted; schools to get more COVID tests; and Fauci fires back.

The rabbi said he threw a chair at the gunman and then escaped with two other hostages after a 10-hour standoff. The hostage taker was killed.

US weather update: Winter storm making trek across US, from Northwest possibly to Atlanta

A winter storm is sweeping across the U.S., from the Northwest through the Upper Midwest and threatening severe weather in the heart of the South. Get the latest forecast.

How's he doing? Americans weigh in on Biden's first year

It's no surprise: A cross-section of U.S. residents remain divided over Joe Biden and his policies. Plus, a look at Jill Biden's "healing" role as a first lady who's kept her day job. 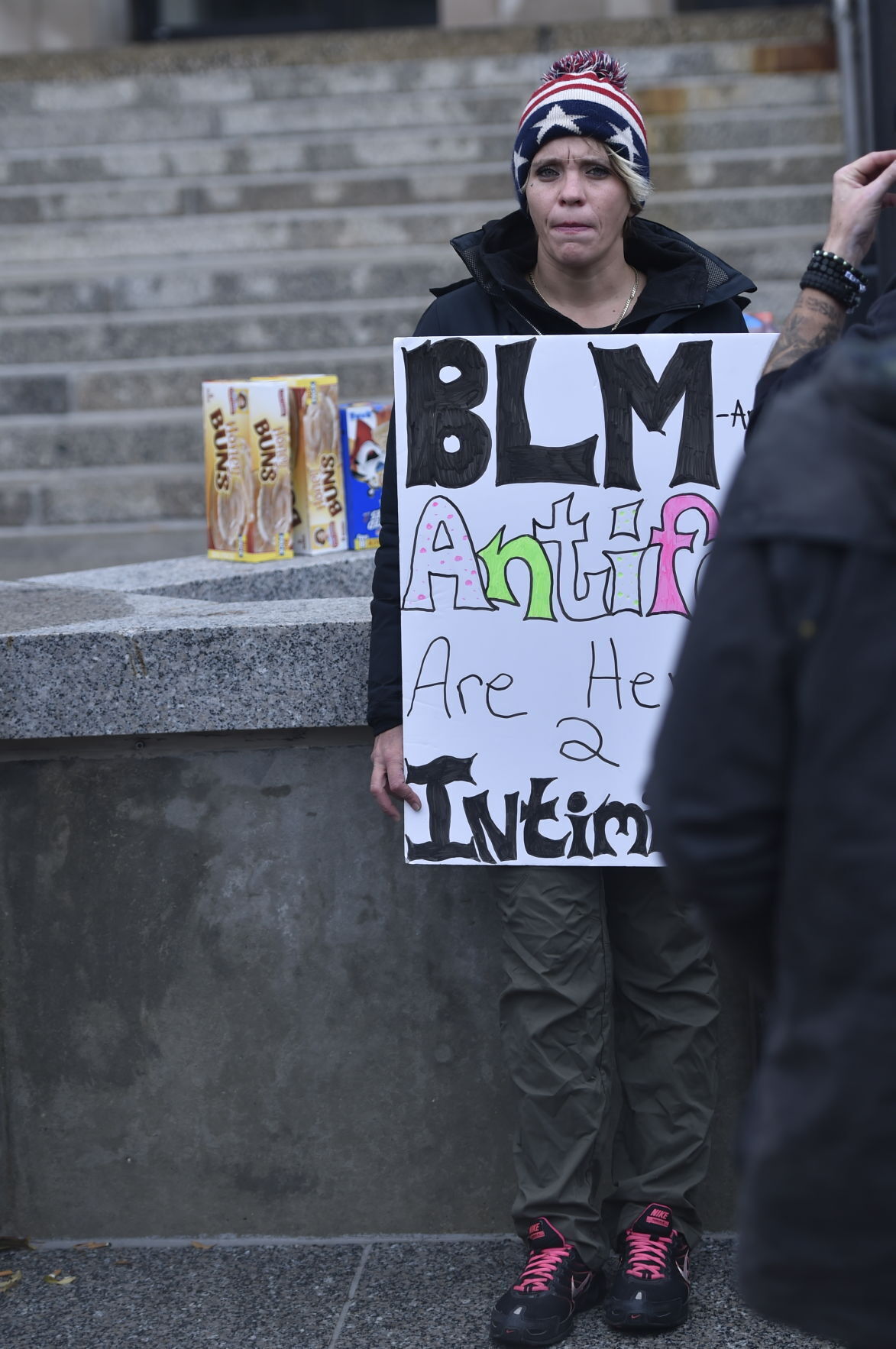 Emily Cahill, who said she’s from “Chicagoland,” claims that her signs were stolen and ripped up by pro-Black Lives Matter demonstrators after dark Tuesday. Pictured here Wednesday morning, she was back in front of the Kenosha County Courthouse steps, after preparing a new sign that reads “BLM and Antifa are here 2 intimidate.” Both days she wore a U.S.A.-themed beanie hat. 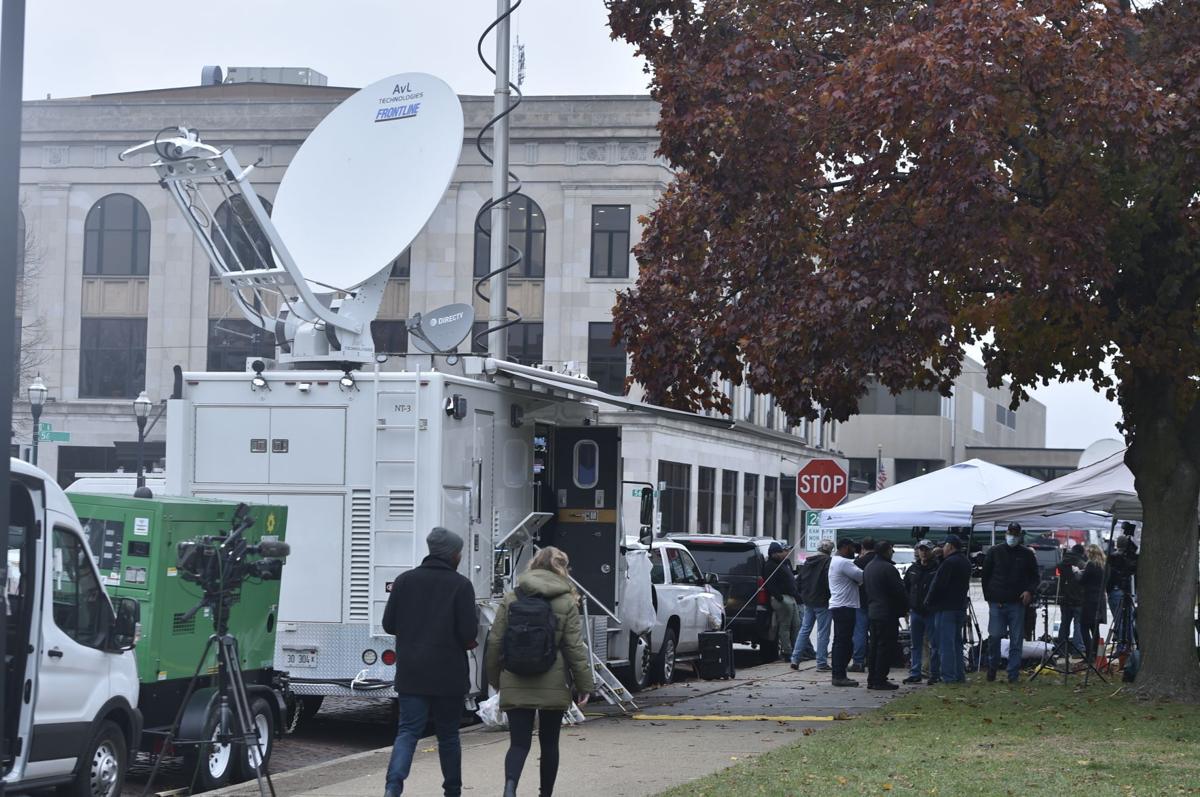 Members of the media stand around in Civic Center Park, which is nearly encircled by TV trucks, Wednesday morning as jury deliberations in the Kyle Rittenhouse trial continue inside. The jury did not reach a verdict for the second straight day and will reconvene this morning. 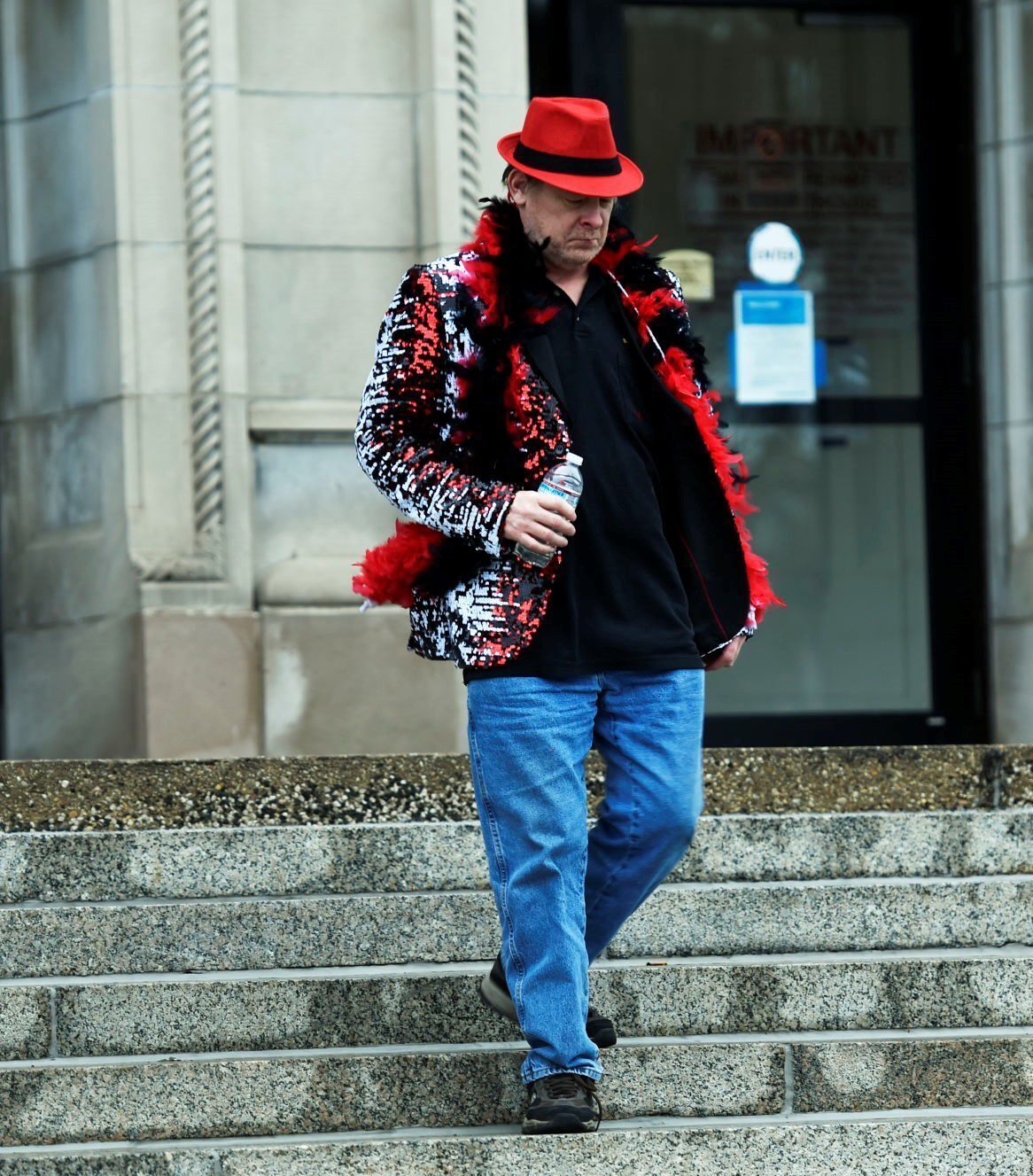 James Kerrigan of Illinois wore a red boa and jacket covered in sequins as he stood outside the courthouse Wednesday morning. He said when he’s off work he often goes to major trials within driving distance of his home, not to pick sides but just to watch — although Kerrigan said “I kind of support” Rittenhouse in this instance. 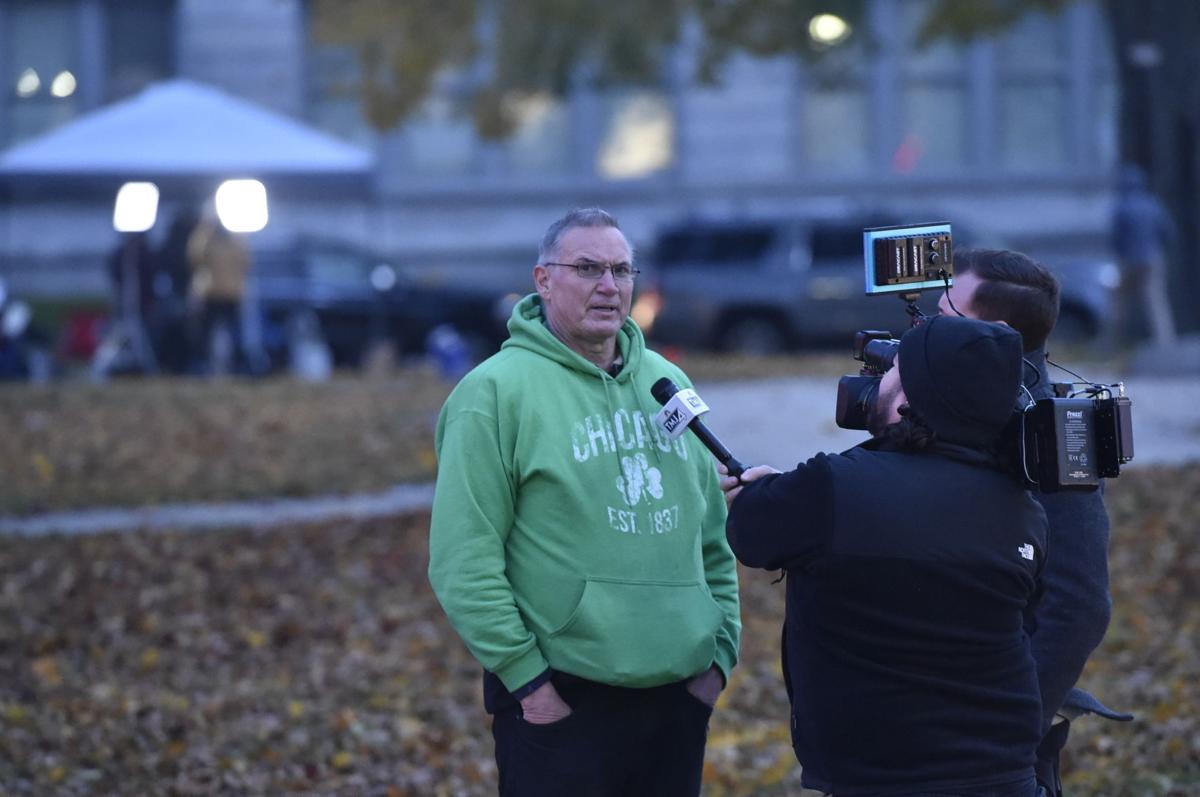 Thomas Heineman, in a green Chicago hoodie, speaks with TV reporters Tuesday afternoon outside the Kenosha County Courthouse. Heineman said he has been twice kicked out of the media room for the Kyle Rittenhouse trial inside the courthouse. 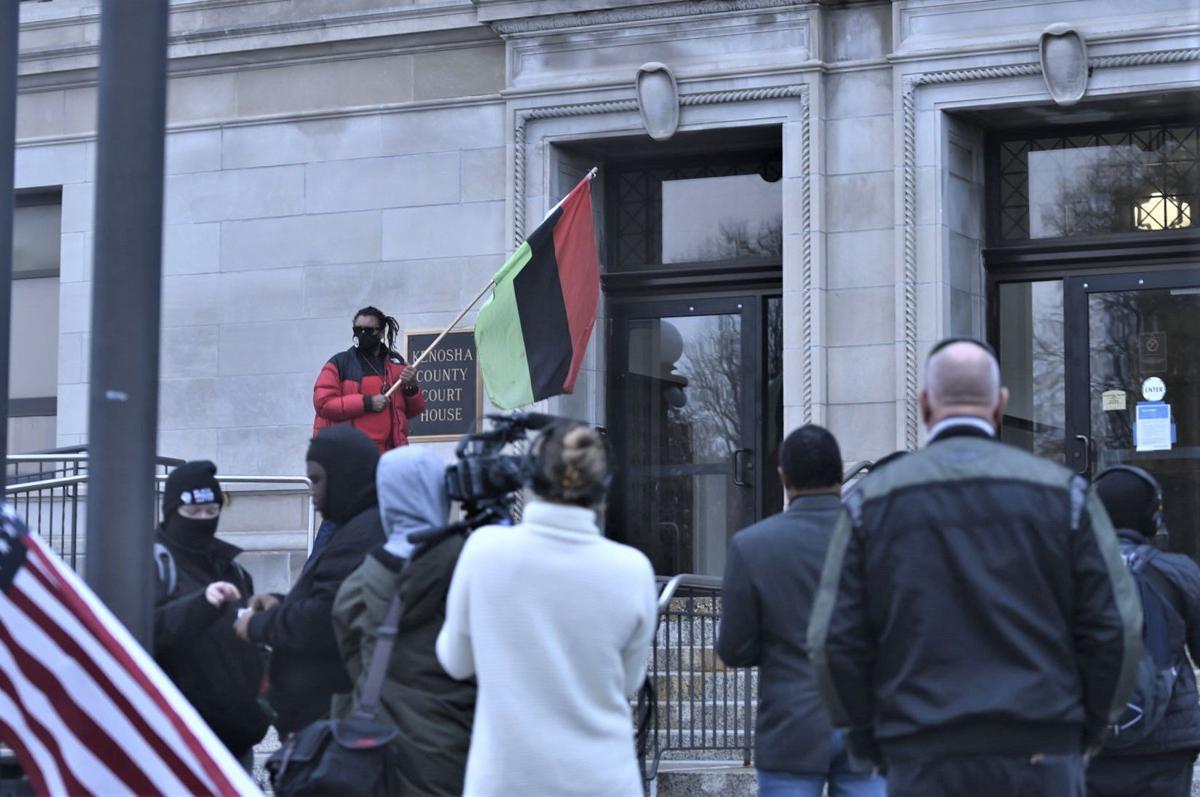 Justin Blake, uncle of Jacob Blake, carries a Pan-African flag on the steps of the Kenosha County Courthouse Wednesday morning. 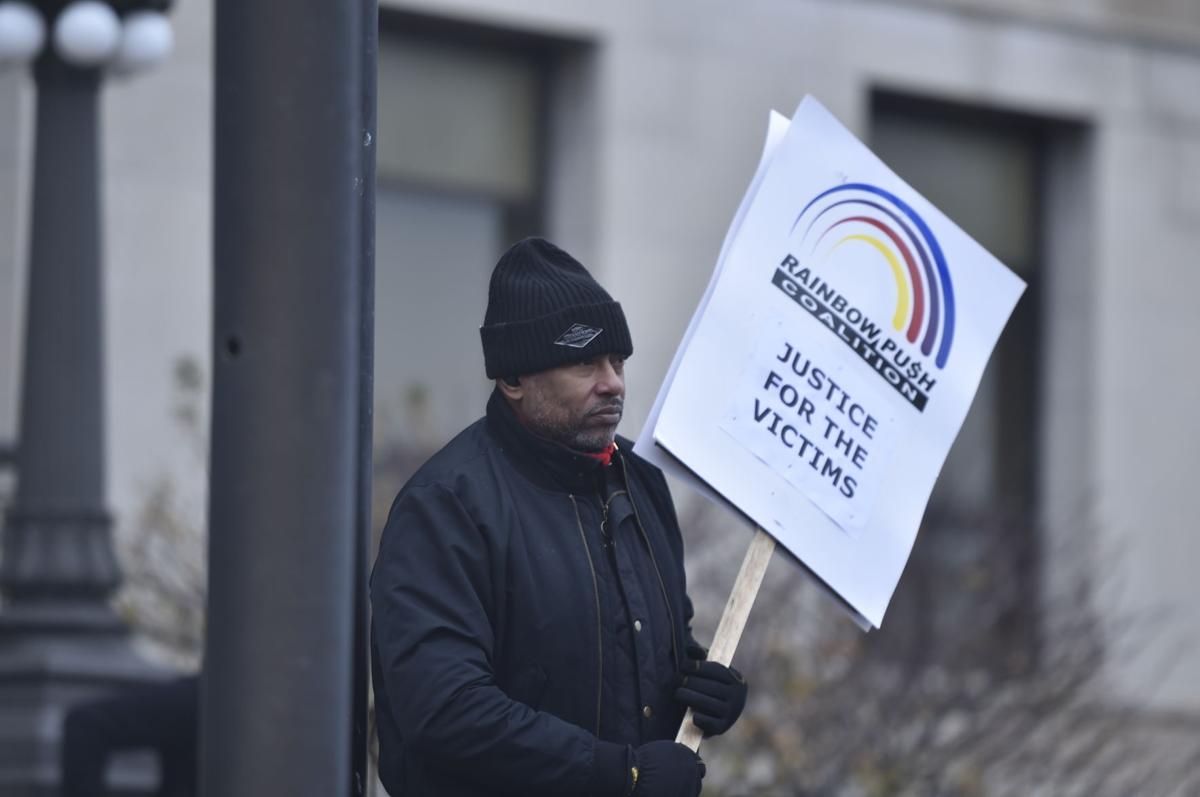 Bishop Tavis Grant, field director of the Rainbow PUSH Coalition that Rev. Jesse Jackson founded, shows support for Anthony Huber, Joseph Rosenbaum and Gaige Grosskreutz on the steps of the Kenosha County Courthouse Wednesday morning. The three men were shot by Kyle Rittenhouse on Aug. 25, 2020; Huber and Rosenbaum were killed.