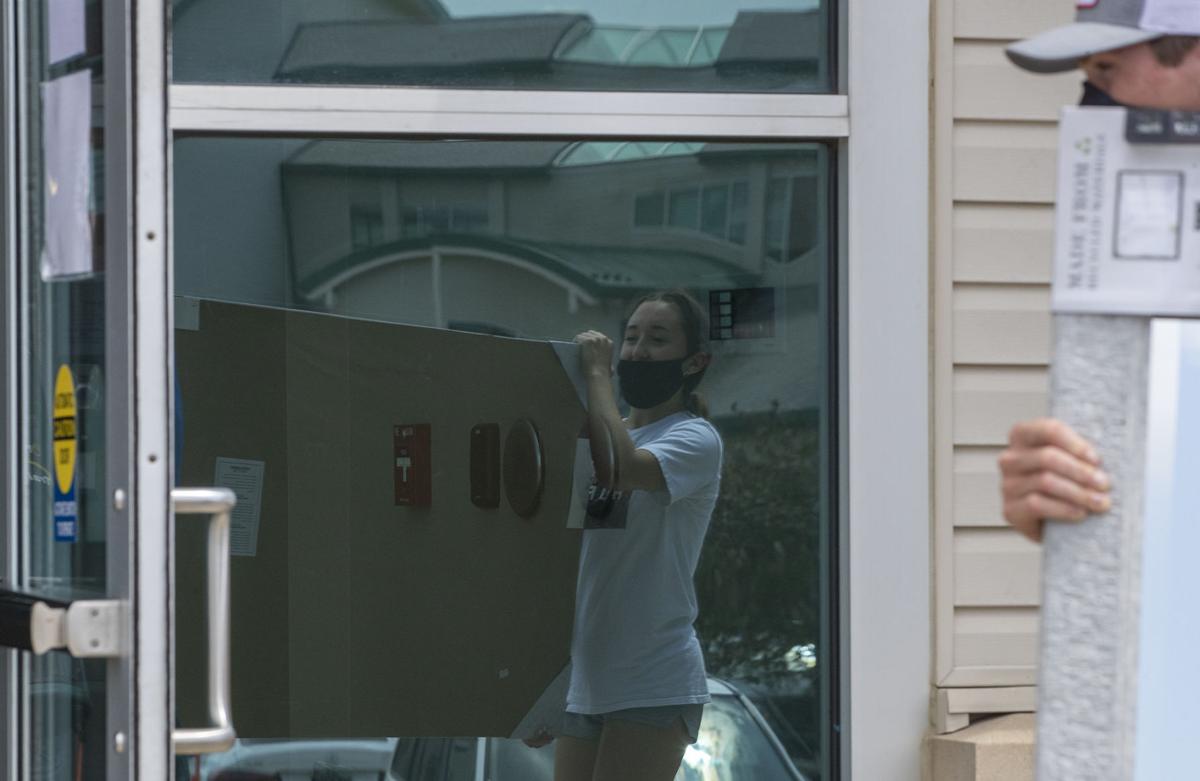 The image of a young woman is reflected in a glass door as students move into the Iowa Western Community College dorms ahead of the fall semester on Aug. 14. 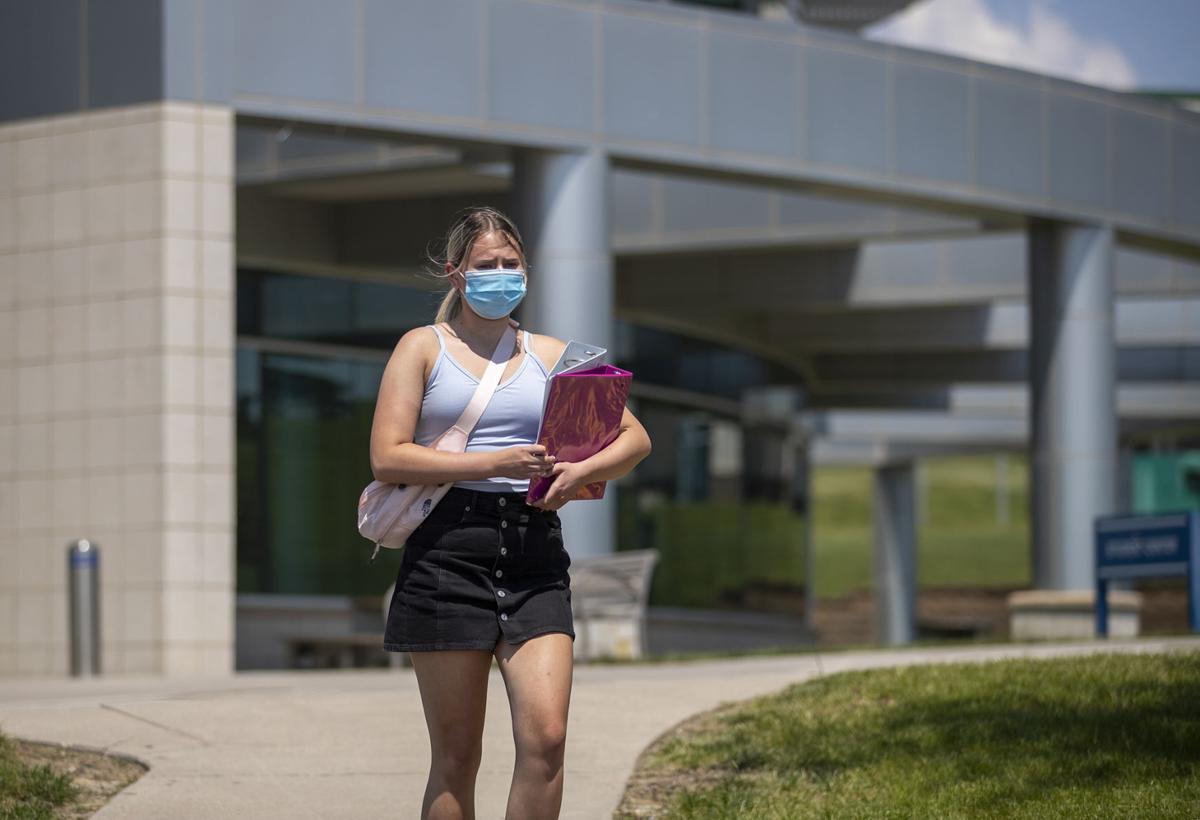 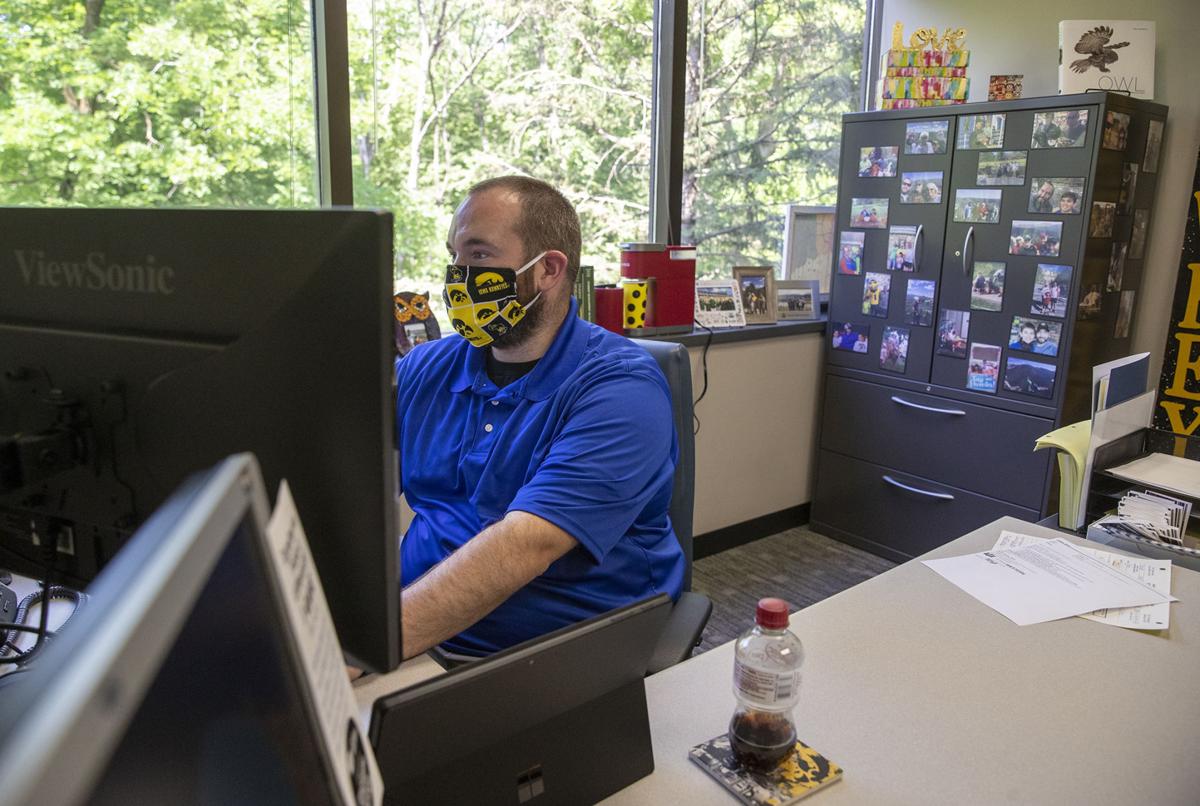 Iowa Western Community College Student Success Advisor Brett Caskey wears a mask while working in his office inside Clark Hall on Tuesday, June 16, 2020. Iowa Western officials recently filled in more details about how the Council Bluffs campus will function this fall in the midst of the COVID-19 pandemic.

Iowa Western Community College had a handful of new cases of COVID-19 last week, according to information released Monday.

Among Iowa Western’s 5,100 full- and part-time students, there were six new cases during the reporting period of Aug. 30 through Sept. 5, according to a report from Don Kohler, vice president of marketing and public relations. Twenty students recovered from the illness, and 12 active cases remain.

Among the college’s 700 employees, there were no new cases and two recoveries, leaving no active cases.

There have been 1,473 recoveries and 34 COVID-19 deaths in the county, according to the state website.

Statewide, there were 70,859 cases out of 674,619 tests. Iowa is third, behind North and South Dakota, on the New York Times COVID-19 tracker for highest amount of cases per 100,000 population over the last seven days.

Two state district court judges on Tuesday declined to halt enforcement of a state requirement for schools to return students to classrooms, denying the Des Moines and Iowa City school districts a legal avenue for educating students at home while the coronavirus continues to spread in their communities.

The Associated Press reported that in two separate rulings, a Polk County judge said Iowa law clearly establishes state control over the time schools must hold in-person instruction, and a Johnson County judge concluded the governor has broad emergency powers that local school boards do not have.

In the Des Moines case, the school district argued a 15% county positivity threshold set by Gov. Kim Reynolds and the Iowa Department of Education to allow online learning is three times higher than the recommended level of virus spread recommended by the U.S. Centers for Disease Control and Prevention and the World Health Organization. The district has said that Reynolds’ policy requiring classes to be held at least half of the time in person until a county reaches that high threshold presents a dangerous risk to students and staff.

The Iowa Department of Education denied the district’s request to hold online only classes. Polk County on Tuesday had a 9% coronavirus positivity rate.

Even as Judge Jeffrey Farrell credited the Des Moines district for its use of various factors to determine health risks rather than “the simplistic model used by state education officials,” he wrote that school districts can’t reverse orders by the Department of Education “because it disregarded the facts.”

“School districts are a creation of state law and have no rights beyond those given by the legislature,” he wrote.

The Des Moines district is Iowa’s largest, with more than 33,000 students and nearly 5,000 teachers and staff.

The legislature and Reynolds have made a judgment call that the benefits of sending children back to school outweigh the increased risk of illness and death, Farrell said.

Farrell credited the school board and officials with diligently trying to protect employees and students while advancing children learning and concluded the district has shown irreparable harm by the state policy.

The state argued that the risk is speculative but Farrell concluded the district has shown evidence that it will be out of compliance with CDC guidelines due to lack of available space in its buildings for adequate social distancing.

“Just last week, the governor shut down bars because people were not socially distancing and transmission rates in Polk County (and five other counties) increased accordingly,” Farrell said. “It is disingenuous to argue that the same risks are not presented under the evidence presented by DMPS.”

Reynolds said the ruling recognizes that her interpretation of law is correct.

“I remain committed to working with Des Moines Public Schools on their return to learn plan so that it meets the educational and health needs of Iowa’s children,” she said.

Des Moines Superintendent Thomas Ahart said he and the school board are disappointed in the ruling. The school board will meet in a private session Wednesday evening to consider with its attorney next steps.

He said online learning will continue for most students until further notice.

Farrell’s decision does not halt the district’s lawsuit, and he wrote that he would address further proceedings in a separate order.

In the Iowa City case Judge Mary Chicchelly concluded that the Iowa Constitution gives the governor broad emergency powers that local school boards do not have.

Education officials have given Iowa City permission for 100% remote learning since surrounding Johnson County has one of the state’s highest coronavirus transmission rates with a 14-day average positivity rate of 22.2%.

Chicchelly said the permission for Iowa City to go online starting Tuesday indicates state health and education officials are responsive to the changing pandemic demonstrating “that these agencies apply their expertise regarding public health conditions in addressing the moving pieces presented by the COVID-19 public health emergency.”

The Iowa City board was joined by the Iowa State Education Association, the state teachers union.

They didn’t immediately respond to messages.

Symptoms in people who have been exposed to coronavirus can include fever, cough and shortness of breath, according to the Iowa Department of Public Health.

The symptoms may appear in as few as two days or as long as 14 days after exposure. Most people experience mild or moderate symptoms that clear up in two to three weeks.

Older adults and people with existing health problems are among those particularly susceptible to more severe illness, including pneumonia.

The Centers for Disease Control and Prevention recommend the use of masks when out in public. Make sure it covers the mouth and nose. Face shields are an option as well, as they cover the eyes.

• Stay home as much as possible.

• Call your physician if symptoms appear.

• Cover coughs and sneezes with a tissue or your upper arm/elbow.

To get tested, residents must complete the online assessment at testiowa.com to schedule an appointment.

For those struggling with mental health during the pandemic, yourlifeiowa.org has several resources, including a hotline at 855-581-8111 and a text-friendly line at 855-895-8398.

The University of Nebraska Medical Center has a COVID-19 screening app — 1-Check COVID.

Tuesday afternoon, leadership at Risen Son Christian Village showed its appreciation to staff for its work amid the COVID-19 pandemic.

Pottawattamie County Public Health and the Iowa Department of Public Health have confirmed an additional two COVID-19 deaths in the county.

Pottawattamie County Public Health officials are working to determine if a 37th resident has died from COVID-19.

A cultural celebration in Council Bluffs will go on this year, with tweaks because of COVID-19.

The image of a young woman is reflected in a glass door as students move into the Iowa Western Community College dorms ahead of the fall semester on Aug. 14.

Iowa Western Community College Student Success Advisor Brett Caskey wears a mask while working in his office inside Clark Hall on Tuesday, June 16, 2020. Iowa Western officials recently filled in more details about how the Council Bluffs campus will function this fall in the midst of the COVID-19 pandemic.