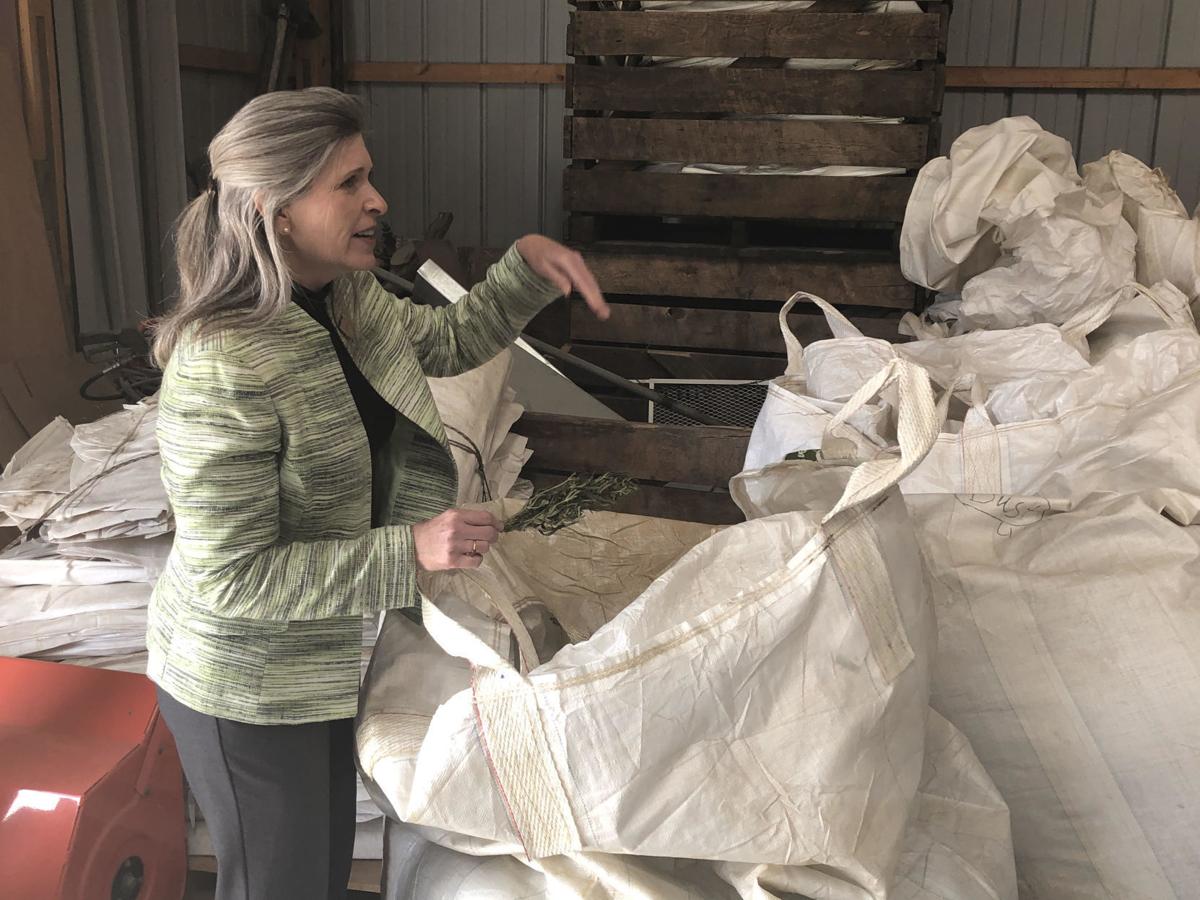 Sen. Joni Ernst handles hemp at the Cerro Gordo County farm of Greg Nicholas on Tuesday afternoon. Ernst said she was there to listen and see what the federal government could do with a future farm bill to spur hemp production in the state. 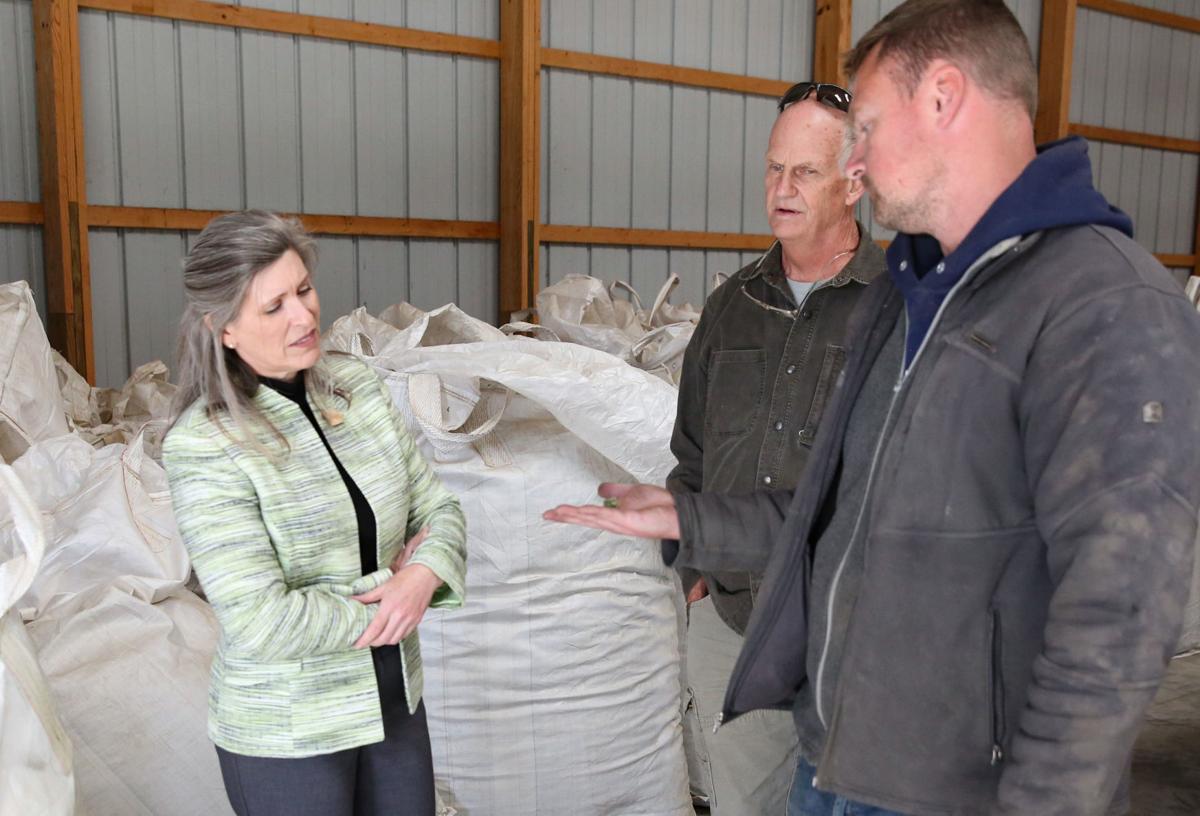 Sen. Joni Ernst looks at a hemp flower left behind after cultivating a hemp harvest at the Nicholas hemp farm in rural Mason City on Tuesday. 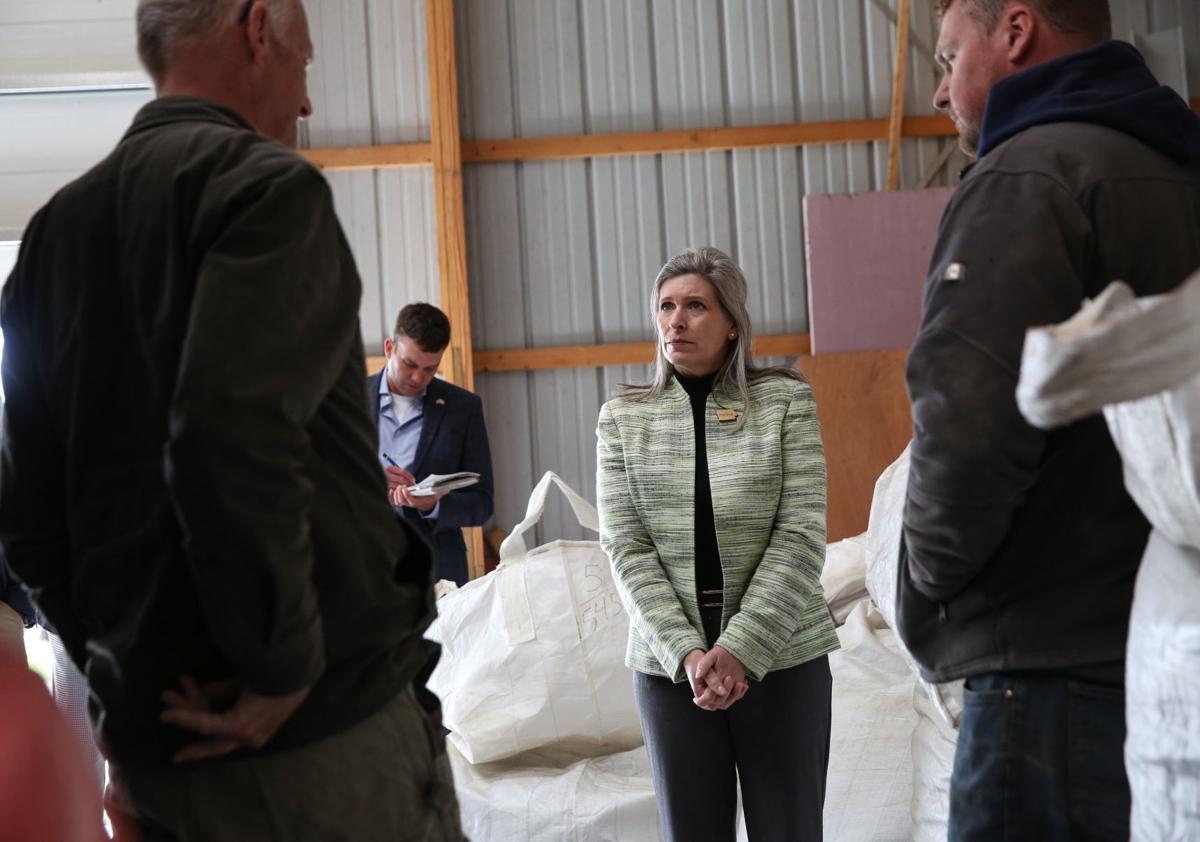 Throughout their talk with Sen. Joni Ernst at their Cerro Gordo County farm on Tuesday afternoon, Greg Nicholas Sr. and Greg Nicholas Jr. wanted to convey one central point to her: Hemp has a future in Iowa and they want to be a part of its growth.

"I think the potential is limitless but we need a little bit of help getting there," Nicholas Sr. said.

What Ernst then said she wanted to know is just how the federal government could provide some help in reaching that destination.

One realm where the elder Nicholas Sr. said Congress could be helpful is getting the USDA to slightly shift its focus from how hemp starts off to how it ends up.

"Instead of the USDA cracking down on farmers, they need to crack down on the processors," he said.

In 2014, President Barack Obama signed a farm bill that allowed farmers to grow hemp under USDA and state supervision. Along with being turned into fiber for paper, rope and even concrete, the plant can also be processed into various CBD oils which can be consumed by people, Nicholas Jr. said.

"When we were looking at legalizing this crop, I had no idea about all of the uses of this material," Ernst told the Nicholas family.

The younger Nicholas also tried to emphasize to Ernst that upping the limit of THC (which can work as a psychoactive in higher levels in cannabis) for crops that farmers produce helps them clear a major obstacle as well.

An article from Forbes in January noted that effective March 22, producers could "grow a crop which can produce a THC limit of 1%, up from the previous 0.5% before the crop was destroyed." They then reported that the harvest window moved from 15 days out to 30 days. "Prior to the rule, any farmer which grew the crop above 0.5% would be charged with negligent violation," Jordan Strickler wrote.

Nicholas Sr. said that testing and verifying those limits on what he and his son grow is stressful. "Our testing results were not the same as the state," he said.

Ernst suggested that such bumpy spots in the current law could be smoothed out by a future bipartisan bill, perhaps the 2023 Farm Bill.

Despite such present impediments, Nicholas Jr. said he sees hemp eventually becoming the third crop in a rotation for farmers (along with corn and soybeans).

"(It) puts back nutrients and enzymes and life back into soil," he said to Ernst.

Once the tour concluded, Ernst took questions from press in attendance about a variety of subjects.

The prior Tuesday, the Cerro Gordo County Board of Supervisors unanimously approved plans to create a separate fund for about $8.23 million in funding from the federal government through the American Rescue Plan Act. Ernst said that she had heard from several counties that they are unsure of how to spend such money.

"If it’s something they weren’t planning on budgeting for, previously, is it money that the federal government is just sending out to those that don’t need it," Ernst said. "(With) money going to the counties, they’ll have to figure out how to spend money within the rules."

In the coming years, Cerro Gordo County is anticipating construction for $2.5 billion transmission line that will run wind-generated energy from outside of Mason City to the Chicago area. Ernst said that she supports the wind sector but wouldn't want to see one energy source favored over another in something such as the the Clean Energy Initiative that President Joe Biden has said could create as many as 10 million jobs.

"I really am an all-of-the-above energy gal. We want to keep energy costs as low as possible for our consumers and Iowa has a very diversified portfolio of energy. Yes it is something I would consider but, again, all of the above," Ernst said. "We shouldn’t cut one industry out and force movement to another. If people choose to go the route of the renewables, that’s really great. We can do that. We can be supportive. But we can also be supportive of things like the renewable fuel standard and the internal combustion engine."

Driving instructors, teachers question bill that would allow parents to teach their teenagers to drive

Iowa teenagers could learn how to drive from their parents, without any certified instruction, if Gov. Kim Reynolds approves legislation that …

Lawmakers say 'life amendment' on track; Abortion measure could go before voters in 2024

Iowa House committee OKs bottle bill changes; Redemption centers would receive 2 cents per can and bottle, up from 1 cent

Iowa driving instructors, teachers question bill that would allow parents to teach their teenagers to drive

Iowa teenagers could learn how to drive from their parents, without any certified instruction, if Gov. Kim Reynolds approves legislation that is en route to her desk.

Sen. Joni Ernst handles hemp at the Cerro Gordo County farm of Greg Nicholas on Tuesday afternoon. Ernst said she was there to listen and see what the federal government could do with a future farm bill to spur hemp production in the state.

Sen. Joni Ernst looks at a hemp flower left behind after cultivating a hemp harvest at the Nicholas hemp farm in rural Mason City on Tuesday.