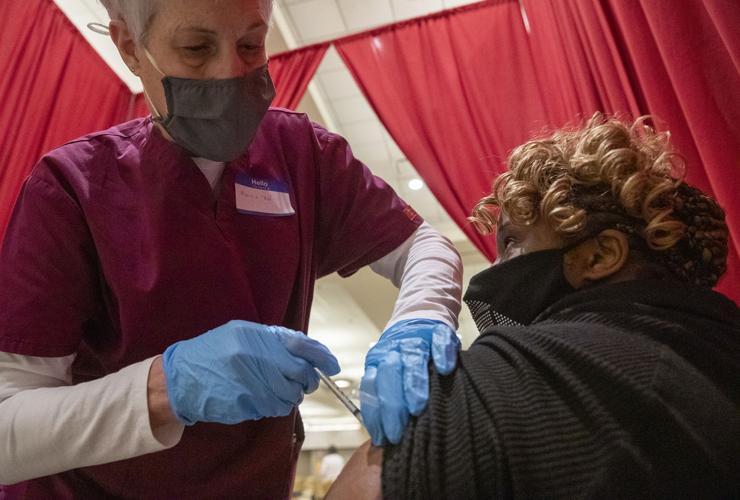 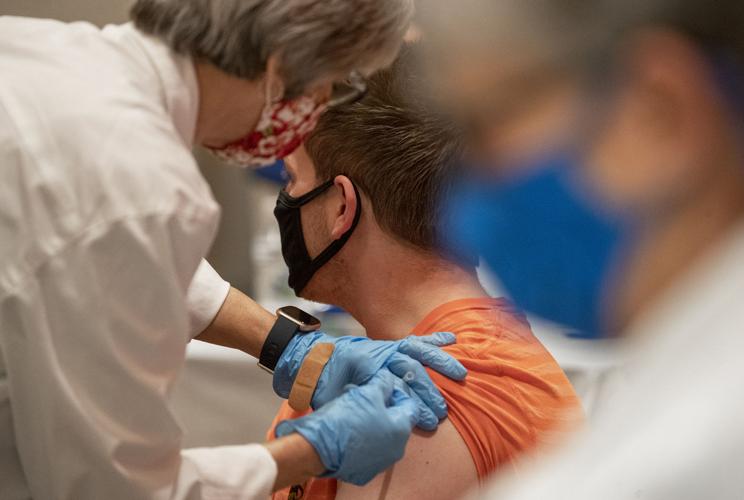 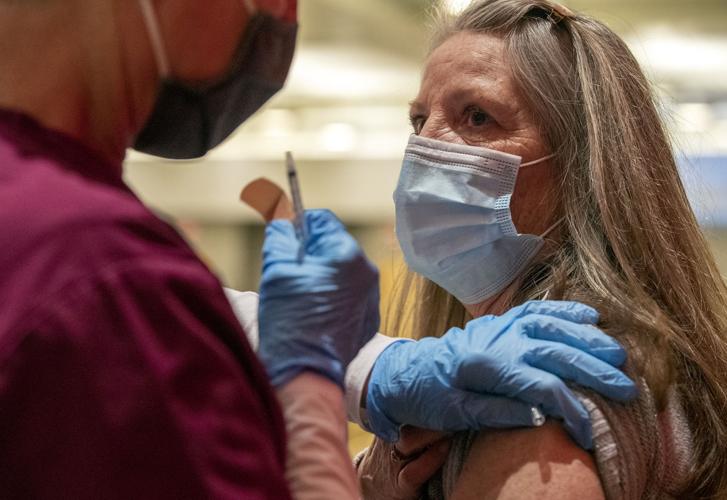 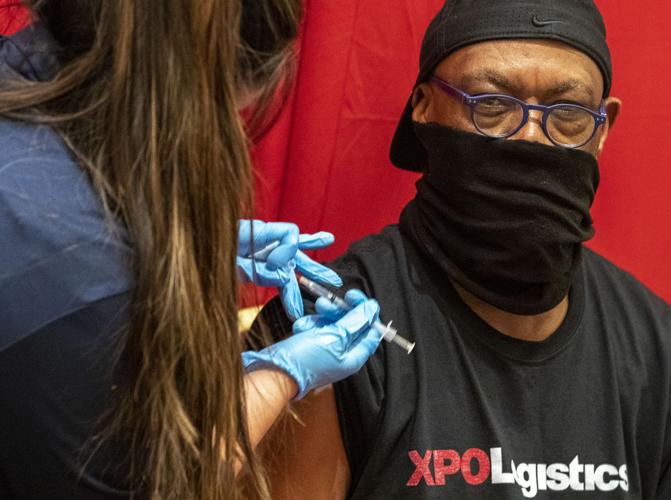 Curtis Owens, right, receives his second dose of the Pfizer COVID-19 vaccine at the Mid-America Center on Wednesday. 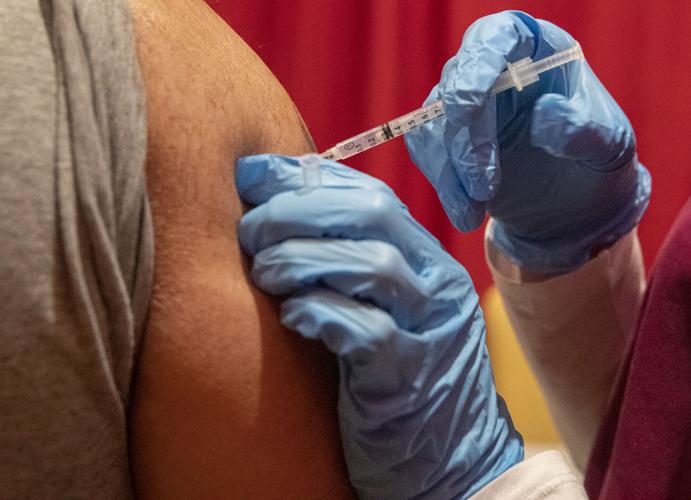 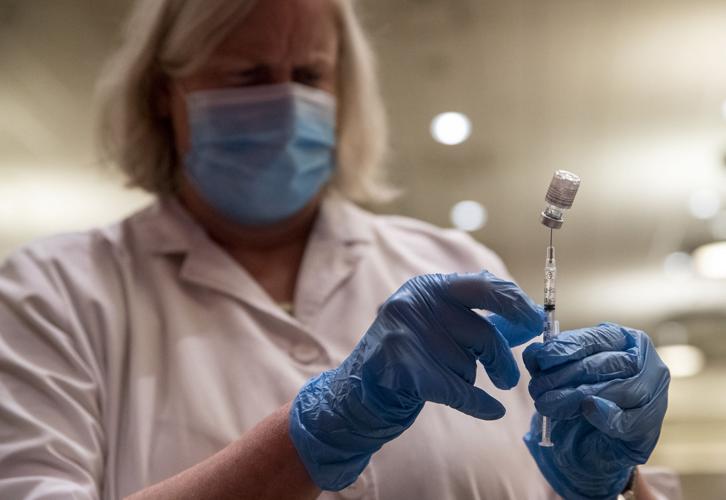 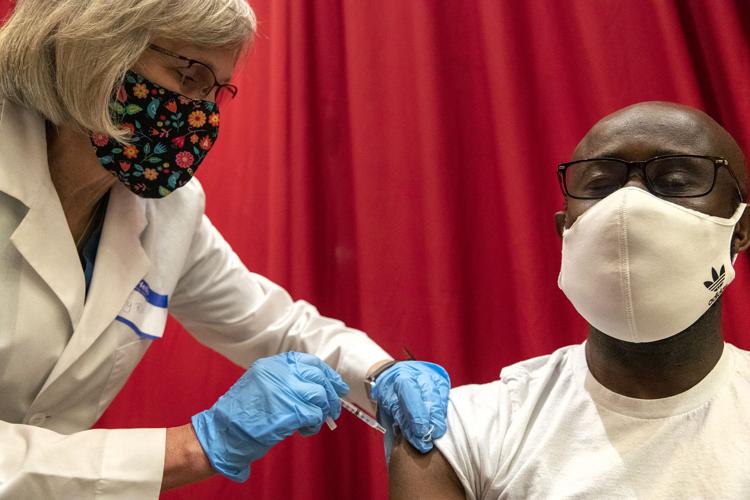 Courtney Stewart, right, receives his second dose of the Pfizer COVID-19 vaccine from retired CHI Health Mercy Council Bluffs nurse Mary Fischer at the Mid-America Center on April 14. The county has moved its standing clinics to the Veterans Affairs building.

JOHNSTON — A top medical and infectious diseases expert in Iowa says the pause in distribution of one of the COVID-19 vaccines proves the system is working as it should, and encouraged Iowans who have not yet received the COVID vaccination to continue pursuing one.

Federal regulators this week halted the distribution of the COVID-19 vaccine produced by the pharmaceutical company Johnson & Johnson because of six cases in the U.S. where young women who had received the vaccine experienced a serious blood clot. One died.

Regulators will investigate and determine whether and when it is safe to bring the Johnson & Johnson vaccine back to market.

Meantime, the other vaccines, produced by Moderna and Pfizer, continue to be distributed in Iowa and throughout the country. No similarly serious side effects have been reported related to those.

Dr. Patricia Winokur, executive dean of the University of Iowa’s medical college and a professor of internal medicine and infectious diseases, said Wednesday the pause on the Johnson & Johnson vaccine’s distribution is an “appropriate precaution.” But she also highlighted that only six cases of severe reaction have been reported out of nearly 7 million doses administered.

In other words, it’s a literal one-in-a-million reaction.

“I think the fact we did pause is important. It’s what we want the system to do,” Winokour said Wednesday during Gov. Kim Reynolds’ weekly news conference at Iowa PBS studios. “Every drug that we create has rare side effects. We don’t see those side effects until we start distributing the vaccine or drug into the general public and millions of people are dosed. …

Reynolds and interim state public health director Kelly Garcia both received the Johnson & Johnson vaccine in early March. Both said Wednesday that after receiving the shot they had mild side effects that have been common with all three vaccines, like a mild headache and soreness, but nothing more.

“I’m glad that I did have the opportunity to have the (Johnson & Johnson) vaccine. I would do it again,” Reynolds said. “Vaccination is the best defense against the virus, and as you’ve heard the reward far outweighs the risk.”

Winokour said anyone who has received the Johnson & Johnson vaccine within the past three weeks should keep an eye out for more serious symptoms like severe headaches, stomach pain or shortness of breath. The six Americans who experienced the serious side effects were women between the ages of 18 and 48, and they began experiencing the side effects between one and three weeks after receiving the vaccine. Anyone who experiences those more serious side effects should contact their health care provider, Winokour said.

Reynolds said because the state was expecting fewer doses of the Johnson & Johnson vaccine in the coming weeks anyway, the pause should not have a significant impact on the state’s vaccine rollout.

More concerning to state officials is the impact the pause could have on Iowans who were undecided about whether to get a COVID-19 vaccine. Officials worry the news could push those Iowans to decide against receiving the vaccine.

There is already some evidence of demand for the vaccine slowing down in Iowa: 21 counties declined new vaccine allotments for this past week because they did not need them to fulfill demand, state public health officials said. Those counties included: Adair, Cass, Clay, Crawford, Davis, Decatur, Floyd, Franklin, Hancock, Humboldt, Jackson, Jefferson, Keokuk, Kossuth, Lyon, Osceola, Sac, Union, Webster, Winnebago, and Woodbury.

“That’s a concern. Of course it is,” Reynolds said.

The state public health department had already scheduled online, interactive information sessions for Iowans who have questions about the COVID-19 vaccines, the first of which is scheduled for Saturday. Garcia said she hopes the sessions help ease any concerns Iowans may have about the vaccines.

“We must keep up the momentum,” Garcia said. “We’ve moved from it being a really scarce supply, which required a ton of patience, and now we’re moving into a space where we really do need to focus on talking with these Iowans who may be on the fence about taking the vaccines, or who now have questions, which is completely normal.”

More than 782,000 Iowans had been fully vaccinated as of Wednesday afternoon and another roughly 379,000 had received the first of two doses, according to state public health data. As a share of the state’s population, those are among the top 15 in the U.S., according to trackers that use federal data.

The state public health department’s first online public information session is scheduled for 10 a.m. Saturday. The event is free and no advance registration is required. The event and more information can be found at iowacovidinfo.org.

The Iowa Legislature has approved and sent to the governor major changes to the state’s 44-year-old “bottle bill” program meant to encourage recycling of beverage containers.

Vouchers bill pitched by Iowa Gov. Reynolds will not pass House this year

DES MOINES — A proposal by Gov. Kim Reynolds to shift taxpayer funding for public schools to scholarships for private school tuition assistance will not pass the Iowa Legislature this year, a top statehouse Republican said Monday.

The Iowa Legislature added to the $1.6 billion tax cut lawmakers enacted earlier this year with approval of a sales tax exemption for diapers and feminine hygiene products.

"They're still babies, too," Gov. Pete Ricketts said in explaining his position on CNN’s State of the Union Sunday. He plans to call a special session if Roe v. Wade is overturned.

Dozens of states, many led by Republicans, have embraced criminal justice reform. But an effort in Nebraska, home of the nation’s fastest-growing prison system, collapsed last month. Why did it fail?

DES MOINES — After numerous attempts for years, the Iowa Legislature has approved and sent to the governor major changes to the state’s 44-year-old “bottle bill” program meant to encourage recycling of beverage containers.

Eleven counties mailed a ballot to every registered voter this year, up from just four counties that elected to use the method four years ago.

DES MOINES — After numerous attempts for years, the Iowa Legislature has approved and sent to the governor major changes to the state’s 44-year-old “bottle bill” program meant to encourage recycling of beverage containers.

Don Bacon, the incumbent 2nd District congressman, and challenger Tony Vargas both are touting their ability to reach across the aisle to pass legislation.

The Nebraska state auditor's office says Douglas County miscalculated in distributing millions to local governments last year, overpaying some and shorting others. The mistake has gone on for years.

Watch Now: Netflix and movie theaters might be teaming up

Watch Now: Netflix and movie theaters might be teaming up

Curtis Owens, right, receives his second dose of the Pfizer COVID-19 vaccine at the Mid-America Center on Wednesday.

Courtney Stewart, right, receives his second dose of the Pfizer COVID-19 vaccine from retired CHI Health Mercy Council Bluffs nurse Mary Fischer at the Mid-America Center on April 14. The county has moved its standing clinics to the Veterans Affairs building.