Subscribe
Read Today's E-Edition
Share This
'On the chunky side' — Nebraska mountain lion ends 700-mile trip with ticks, scars and a few extra pounds
0 Comments
Share this
1 of 3 The Nebraska-born mountain lion was sedated for its veterinary exam. The Nebraska-born mountain lion is perched atop one of his den boxes at Exotic Feline Rescue Center in Indiana. The Nebraska-born mountain lion didn’t miss many meals on its 700-mile walk to Illinois.

“He has been a very successful predator,” said Joe Taft, who runs the Exotic Feline Rescue Center in Indiana, where the young male ended up two weeks ago. “He’s on the chunky side for a boy who’s done a whole lot of walking.”

Taft took in the young male lion Oct. 28, after it outstayed its welcome in suburban Springfield, Illinois, and federal wildlife officials sedated the animal and offered to return it to Nebraska, but Nebraska said no.

So they turned to Taft and his 260-acre sanctuary for big cats.

It was a short-notice request, but Taft found a temporary cage for the animal. And a few days later, he and a veterinarian gave it a thorough exam.

The lion had an obvious, straight-line scar running the length of its back. “It's an old scar, it's long and it's very narrow. I’d go with running under a barbed-wire fence.”

It also had signs of wounds around its face and neck, as if it had fought another mountain lion, Taft said.

And it had ticks. But other than that, the animal seemed healthy and well-fed, despite its four-state journey. Taft and the vet didn’t have a scale, but they estimated its weight at about 140 pounds.

The animal did reject the food Taft fed it the first few days. But once he moved the cat into a bigger enclosure, its appetite returned. Taft fed it a deer leg. And then another. And then a legless deer carcass.

Taft also gave it a tentative name — NE-110, for the number on its ear tag.

A year ago, in the Niobrara River valley, Sam Wilson put a GPS collar on the animal. The furbearer and carnivore manager for the Nebraska Game and Parks Commission determined the lion to be about a year old — and a good candidate to disperse in search of its own territory and mate.

It did, and the collar’s periodic reports were helping Wilson and other biologists learn about mountain lion behavior in Nebraska.

“It was providing information that we’re really interested in, in part because these eastern-dispersing cougars have gotten a lot of public attention.”

But the animals are elusive, and unless they were caught on trail cams or hit by cars, biologists didn’t have much information about their movements.

Radio collars changed that, providing tangible evidence of the distance the animals could cover, and clues to the habitat they preferred — whether they stuck to river systems or traveled cross-country.

The state is monitoring about 20 mountain lions through GPS collars, but NE-110 covered the most ground. For nearly 12 months, Wilson and others could follow along as it moved south and east through Nebraska, passed through Lincoln, walked across Iowa and entered Illinois.

“This is exactly the kind of thing we were trying to learn by collaring younger cats we thought would disperse.”

Mountain lions moving east in search of a mate have little luck; they often end up in states without resident lion populations, and females don’t disperse like males do, leaving little chance for them to meet a mate.

So the males keep moving. “The outcome likely will be the animal would wander the rest of its life,” Wilson said.

Unless it’s hit by a car, shot by a farmer or live-captured by wildlife officials.

Illinois knew the Nebraska cat was coming. Wilson was giving his counterparts there updates on its progress — as it approached the Mississippi River, after the collar reported from western Illinois and, in the last week of October, when it signaled from Springfield.

But it hung around too long, and officials there determined it “posed an imminent threat to residents and property and therefore needed to be removed,” according to a news release from the Illinois Department of Natural Resources.

Wilson wouldn’t comment on the decision to tranquilize and move the mountain lion. “It was in Illinois. At that point, it’s their purview for that animal. That’s their decision.”

But he explained why Nebraska didn’t take it back.

The state has a policy prohibiting wild animals from being moved more than 100 yards from where they're caught. That allows for the release of an animal onsite if it was accidentally trapped, or shut into a barn or other outbuilding.

“But it doesn't allow people to move animals all over the state; there are issues with that,” Wilson said.

Like territoriality. A transplanted animal can get killed by the resident population. And there are concerns a relocated animal could carry diseases that pose a threat to a healthy habitat.

Also, once the mountain lion — or any other animal — crosses the border, it’s no longer Nebraska’s responsibility.

“When they're in a neighboring state, they’re the responsibility of that state. It just comes down to that.”

And now NE-110 is Taft’s responsibility, one of about 120 big cats from 24 states — including lions, tigers and leopards — his sanctuary takes care of.

For now, the Nebraska mountain lion is living in an enclosure originally built to house leopards confiscated from a meth lab. The space has three wooden den boxes, and the cat found one it liked.

But the arrangements are only temporary. Taft plans to build a 220-foot-by-220-foot enclosure, with 20-foot walls, downed trees, boulders and a water feature.

He estimated it will cost about $50,000. He’s looking into grant funding, but his nonprofit is also seeking donations. For more information, go to: efrc.org and click “Support.”

The mountain lion’s new home will be the center’s biggest enclosure yet.

“It’s a wild animal. We just feel the more space he has, the more comfortable he’s going to be here.”

Ryan Kizzier was a husband and father of two young boys.

A BMW crashed with a 2020 Mack Anthem semitrailer driven by 20-year-old Braxton William Matthew Murphy of Eldora. A passenger in the semi sustained minor injuries. Murphy appeared to be unharmed.

Nebraska is among a coalition of states making an effort to keep in place a Trump rule that allows many asylum seekers to be turned away at the southern U.S. border.

A man serving a life sentence for first degree murder out of Douglas County died at a Lincoln prison on Friday.

A Forest City woman spent about a month after winning a $2 million Powerball prize gathering details and making a plan before she claimed the winnings.

One dead in apparent shooting in Waterloo

Police found the victim, an adult male, lying in the parking area of an apartment building at 215 Miriam Drive.

A La Vista man, who killed four people when he crossed the center line and struck another vehicle in January 2021, received two years of probation Friday. The outcome stunned the sole survivor.

Makhi Woolridge-Jones, who killed 21-year-old Trequez Swift at Westroads Mall in April 2021, will be in his 50s when he's first eligible to be released from prison.

The Nebraska-born mountain lion was sedated for its veterinary exam. The big cat's long scar -- likely from a barbed-wire fence -- can be seen running down its back. A veterinarian examines the Nebraska-born lion.

The Nebraska-born mountain lion is perched atop one of his den boxes at Exotic Feline Rescue Center in Indiana. 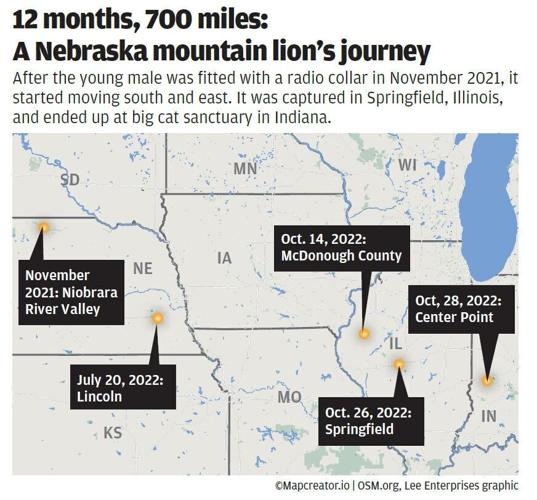