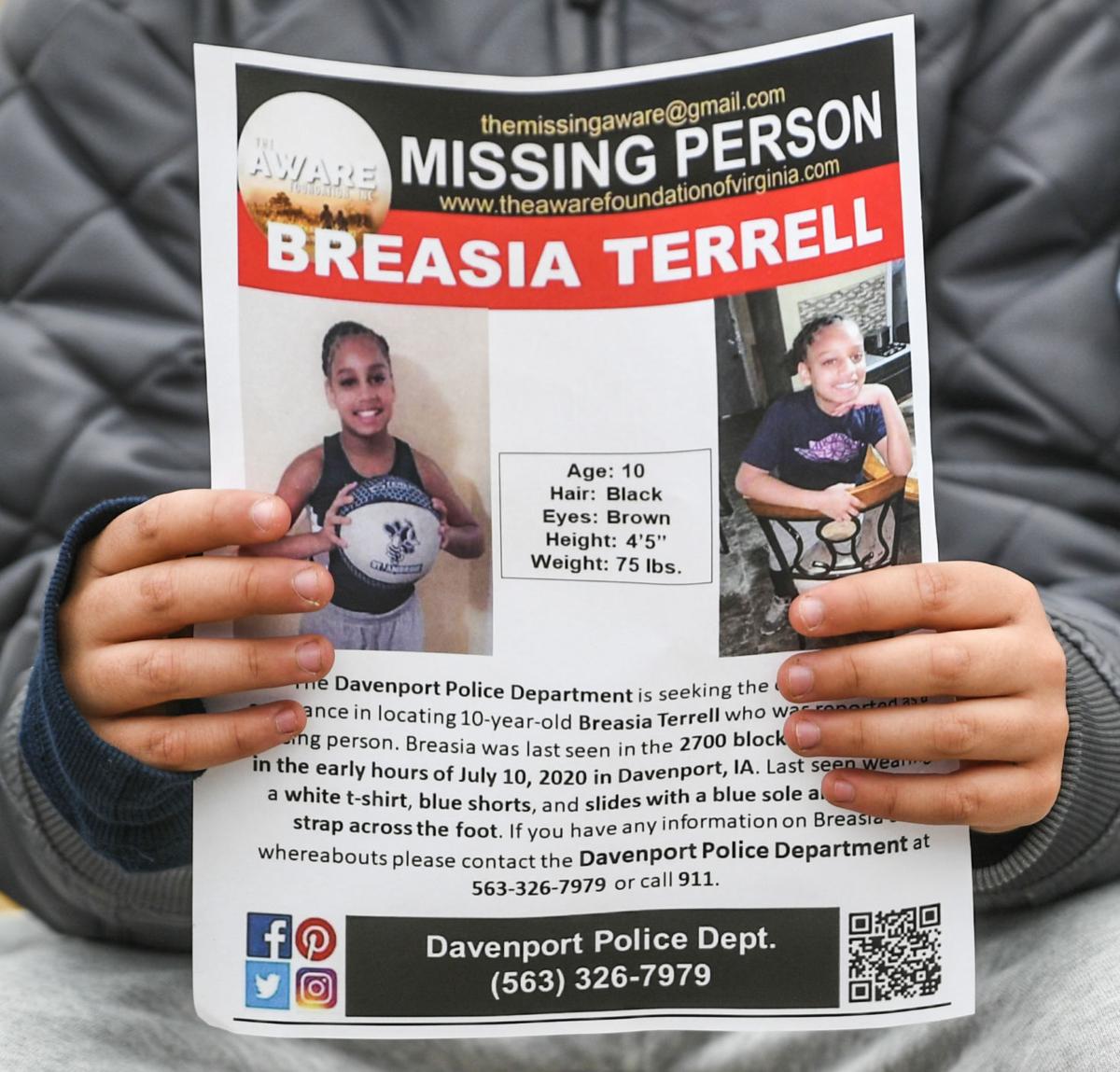 Bentley Sunner, 8, of Davenport holds a flier during a walk in honor of missing Breasia Terrell, 10, of Davenport at Vander Veer Park Sunday, Nov. 15, 2020, in Davenport. On Wednesday, Davenport police announced Wednesday that human remains found north of DeWitt had been identified as those of Breasia. 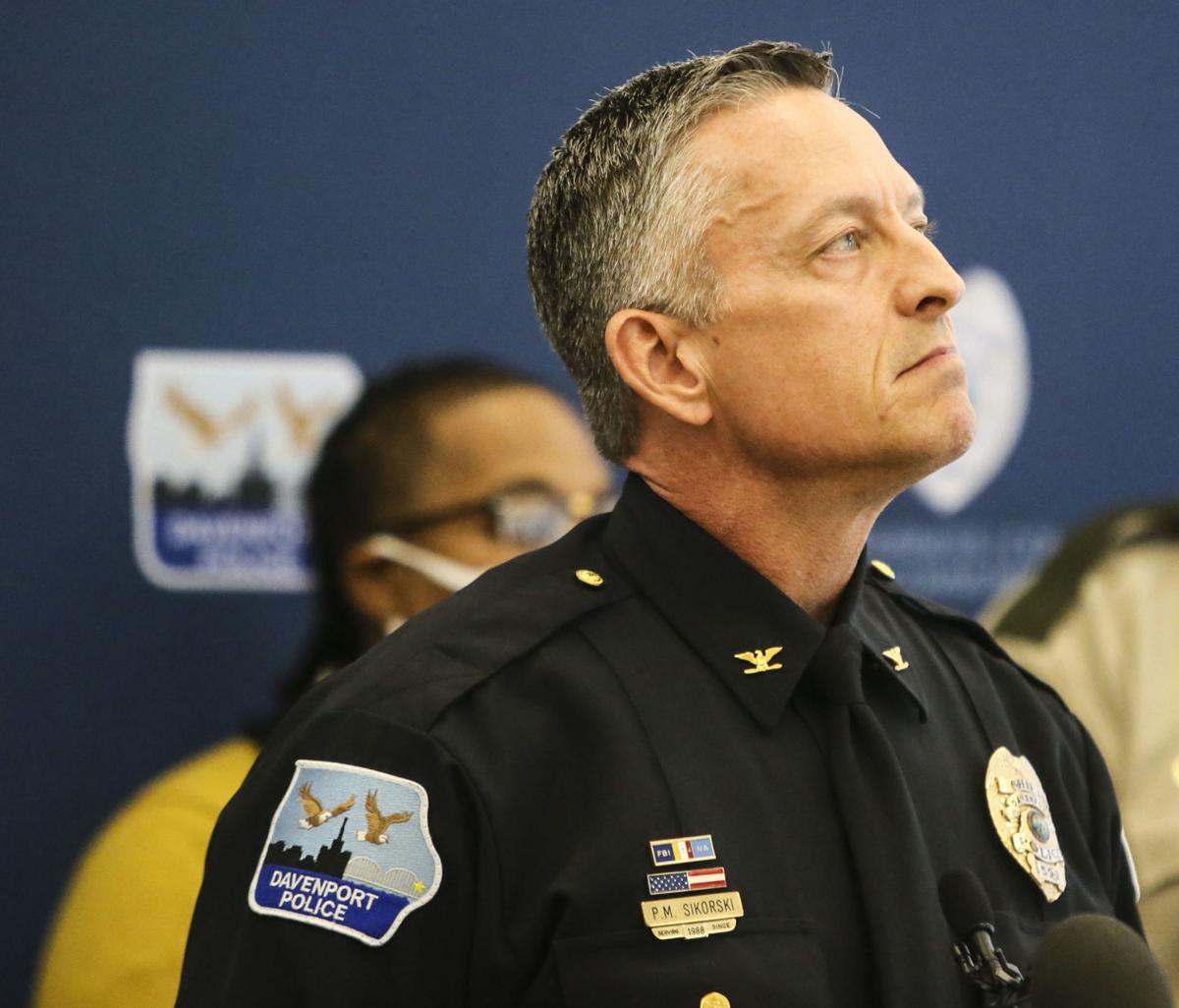 Davenport Chief of Police Paul Sikorski makes the announcement Wednesday at the Davenport Police Department that the human remains found in DeWitt last week were confirmed to be Breasia Terrell. The identity of the human remains found last week just north of DeWitt was announced Wednesday in front of nine news cameras perched on tripods inside the Davenport Police station's community room.

Davenport Police Chief Paul Sikorski had to speak words no one wanted to utter since a hot day in July 2020.

"In regards to the human remains found near 270th Avenue near DeWitt, an autopsy on the remains was conducted by the Department of Criminal Investigations, and we have received confirmation," Sikorski said in a measured tone. Then the 31-year veteran of Davenport's police paused and leaned away from the microphones on the podium in front of him.

Before he could say her name, Sikorski swallowed hard and struggled to hold back tears.

"We have received confirmation," he said again, "that the remains are those of Breasia Terrell."

Visibly shaken. Sikorski paused again before his next words.

"This news is heartbreaking," he said, "both for Breasia's family and the Davenport community."

Sikorski said investigators remained in contact with Breasia's family after the then-unidentified remains were found last Monday. Her family was informed Tuesday after the remains were identified.

Sikorski declined to offer any details about the ongoing investigation, but he made it clear Breasia's death is being investigated as a homicide.

"Honestly, since she disappeared, we've investigated this case like it's a homicide," Sikorski added.

In an interview, Scott County Attorney Mike Walton could not say if the case will be prosecuted in Scott County or Clinton County.

"It's too early to tell," Walton said. "It's still being investigated."

Human remains were discovered by a pair of fisherman Monday, March 22, in or near a small pond just off the intersection of 270th Avenue and 218th Street, 3 miles north of the town of DeWitt.

Because Breasia was a missing-persons case and credible tips led investigators to Clinton County, the Clinton County Sheriff's Department called Davenport Police. Those remains were fully removed by a forensics team last Tuesday.

Investigators believe Breasia, then 10, was last seen late July 9 or during the early morning hours of July 10 last year.

After extensive searches through out Davenport — including the waters of the lagoon at Credit Island — Davenport Police, deputies from the Clinton County Sheriff's Department, searchers from an array of other area law enforcement agencies and a number of volunteers searched throughout rural Clinton County for Breasia last August.

Sikorski declined to comment if the area around 270th Avenue north of DeWitt was the focus of any previous searches.

The lone person of interest in Breasia's disappearance is being held in the Clinton County Jail.

Breasia spent the night with her brother at Dinkins' home during the time period she disappeared. Dinkins, 48, is the boy's father. He has not been charged with any crime related to Breasia's disappearance.

In late August of last year, Dinkins was moved to the Clinton facility because of overcrowding in the Scott County Jail.

"This is a very tragic and emotional time for everyone — especially Breasia's family," Sikorski said. "And we ask that the community remains patient — with Breasia's family and investigators."

Lewis Central Middle and High Schools are warming up for a spring musical that is bound to go swimmingly.

A Council Bluffs man was sentenced to just over four years in prison on a federal firearms charge in U.S. District Court Monday.

Buckingham Palace has released the broad outlines of Saturday's funeral program for Prince Philip, including plans for princes William and Harry.

Ten months ago, Donita Wiley Madison seemed to make a tremendous recovery from COVID. But the virus got her in the end.

Council Bluffs’ two public school systems were among those recognized by the Council Bluffs Area Chamber of Commerce as Unbelievable Workplaces.

Council Bluffs Community Schools’ Virtual Academy will be streamlined for this fall as enrollment plummets in the program, which was created i…

Bentley Sunner, 8, of Davenport holds a flier during a walk in honor of missing Breasia Terrell, 10, of Davenport at Vander Veer Park Sunday, Nov. 15, 2020, in Davenport. On Wednesday, Davenport police announced Wednesday that human remains found north of DeWitt had been identified as those of Breasia.

Davenport Chief of Police Paul Sikorski makes the announcement Wednesday at the Davenport Police Department that the human remains found in DeWitt last week were confirmed to be Breasia Terrell.