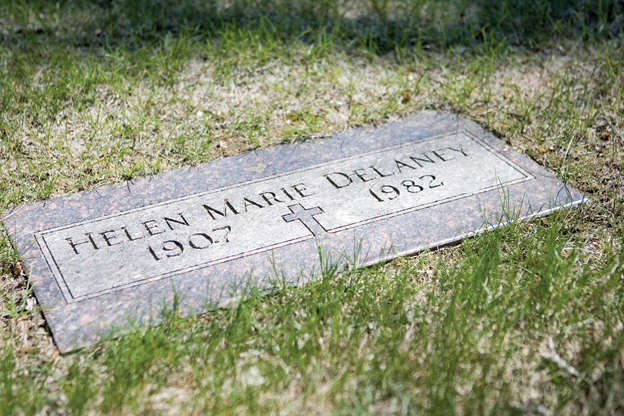 The headstone of Helen Marie Delaney, a survivor of the RMS Titanic, rests in St. Joseph's Cemetery in Council Bluffs. 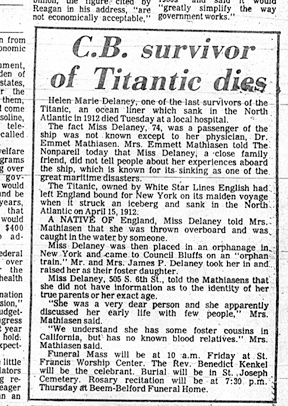 
As the great Titanic sank to its watery grave, Helen Delaney was thrown overboard.

Someone caught the 4-year-old, according to archive reports, and she survived the night, a fate her parents unfortunately didn’t enjoy. The youngster ended up in Council Bluffs by way of an “orphan train” and lived here in anonymity until her death.

Shortly before midnight the “unsinkable” Titanic struck an iceberg while traveling at near maximum speed in the frigid North Atlantic Ocean.

The frozen mass opened five of sixteen watertight compartments on the starboard (right) side – the ship was designed to stay afloat with four or less flooded compartments – which began the Titanic’s descent.

Of the approximately 2,207 passengers that boarded the giant ship, 705 survived. Less than 50 who ended up in the ocean lived; the rest of the survivors were on the limited number of lifeboats available.

The child boarded the ship in England, though at what port or on what date is a mystery, as is her ancestry. She was possibly English, Spanish or Italian. The names of Helen’s birth parents are unknown, lost to the cold Atlantic Ocean waters. Helen didn’t know her exact birth date.

With the other survivors, young Helen arrived in New York on April 18 and was placed in an orphanage.

James P. Delaney, a Council Bluffs locomotive engineer for the Chicago, Burlington & Quincy Rail Company (now BNSF), and his wife adopted Helen when she arrived in the city via orphan train.

Helen attended Mount Loretto Catholic High School on North Broadway and Oak Street, where Super Saver is now. Afterward she remained in Council Bluffs, never married or had children. She lived in anonymity in an apartment at Regal Towers on South Sixth Street.

For much of her adult life Helen worked as a sales clerk at the Kresge’s variety, or “five and dime,” store, which sat next to Beno’s department store on West Broadway.

Only a few people in town knew she’d survived the shipwreck.

“She rarely talked about her Titanic legacy,” said Dick Warner of the Historical Society of Pottawattamie County. “Most people who knew her weren’t even aware of it.”

Emmett and Arlene Mathiasen were among the few that Helen told. Emmett was her doctor and Helen became close with both Dr. and Mrs. Mathiasen. Even though she revealed her history, Helen rarely spoke about the Titanic or her time as an orphan.

“She just didn’t say much about it,” Arlene said.

Jerry, son of Emmett and Arlene, remembers his parents often drove the diminutive woman to church – either at St. Francis or St. Peter’s Catholic parishes – and helped her with a variety of errands.

“I remember she was very small, very petite,” Jerry Mathiasen said of Delaney. “She was shy, but very nice. Such a nice person.”

Delaney was the only known passenger on the Titanic to live in Council Bluffs. Newspaper accounts of Helen’s death called her one of the last survivors of the shipwreck. Survivor Frank Goldsmith died days later, on Jan. 30.

– The Historical Society of Pottawattamie County and World-Herald News Service contributed to this report, which also featured Nonpareil archive material.

Titanic survivor Helen Delaney arrived in Council Bluffs on an orphan train in the mid- to late-1910s.

The “Orphan Train Movement” operated from 1854 to 1929, with an estimated 200,000 orphaned, abandoned or homeless children transported from New York City to adoptive families throughout the country, according to the National Orphan Train Complex, a museum and research center dedicated to the preservation of orphan train history.

In the 1850s there were an estimated 30,000 abandoned children in the city. The Children’s Aid Society and New York Foundling Hospital worked to find them homes.

The period of mass relocation of children in the United States is widely recognized as the beginning of documented foster care in America, according to the orphan institution.

– Reporter Mike Brownlee can be reached at (712) 325-5732 or by email at mike.brownlee@nonpareilonline.com.

The Titanic, the world’s largest passenger ship at the time, struck an iceberg in the North Atlantic on the evening of April 14, 1912, and sank in less than four hours with a death toll that topped 1,500.

Those are the facts that everyone now knows, especially with all the attention on the tragedy in conjunction with the 100th anniversary today.

But, there are many unknown or under publicized facts about this drama that still captivate the world a century later.

For example, everyone looking at photos of the ship immediately notices the four tall smokestacks. Actually, only three of them were operational. The fourth, the one nearest the back or stern, was built to make the ship look bigger.

Other little-known facts include:

- A 1906 quote in a magazine in which a famous navigator of the high seas, discussing the improved methods of shipbuilding, said, “I cannot imagine any situation that would cause a ship to founder (to sink). Modern shipbuilding has gone beyond that.” The man to whom that quote was attributed was Edward J. Smith, who six years later would captain the Titanic.

- American author Morgan Robertson wrote a book, titled Futility, in which a large passenger liner sank after hitting an iceberg on a cold April evening, resulting in huge casualties because of few lifeboats. The ship was called the Titan. It was written 14 years before the Titanic sailed its way into history.

- Most ships then, and today, are “christened,” with a woman breaking a bottle on the ship as it prepares to enter service. The Titanic was never christened because the White Star Line that oversaw its construction did not partake in that ceremony.

- At about 11 p.m. on the infamous night, the wireless operator on the Californian, stuck in ice some 20 miles away, wired information to the Titanic with precise information on where icebergs were located. The Titanic operator wired angrily back, “Shut up. Shut up. I am working Cape Race (wireless land station).” The Californian operator stayed at his post until 11:30 p.m., when he shut his machine down for the evening. Just 10 minutes later, the Titanic hit the iceberg.

- Following the tragedy, both U.S. and British officials conducted hearings on the reasons for the sinking. One of the first questions asked by Michigan Sen. W.A. Smith was what icebergs were made of.

- Then, there’s the sad tale of Fredrick Fleet, the man in the crow’s nest who first saw the iceberg and phoned downstairs, “Iceberg right ahead.” After being one of the survivors, he left the company a few months later, apparently depressed that he survived and so many didn’t. He did find other work in the shipping field for the next three decades ago. Near the end of his career, however, Fleet was selling newspapers on a street corner. After his wife died in late 1964, he became despondent and committed suicide shortly thereafter. He was buried in an unmarked pauper’s grave until 1993 when a headstone was erected through the donation by the Titanic Historical Society.

WH: Omicron variant found in 20 countries, not US

WH: Omicron variant found in 20 countries, not US

More than 50 now dead in coal mine blast; plus other top news today

Finding other survivors is highly unlikely, officials said. In the U.S., weather may make post-Thanksgiving travel tricky, and hundreds of FedEx shipments have been found dumped in a ravine.

Judge Matthew T. Schelp of the Eastern District of Missouri granted the injunction against the Centers for Medicare and Medicaid Services.

All 3 men charged in Arbery's death convicted of murder

All three white men charged in the death of Ahmaud Arbery were convicted of murder Wednesday in the fatal shooting that became part of a larger national reckoning on racial injustice.

New COVID-19 variant spreads in Africa: What you need to know

It's unclear where the new variant actually arose, but a slew of nations moved to restrict travel from Africa. Here's what you need to know, plus more updates and the latest data on infections and vaccination.

The latest on the new omicron variant: Two new cases confirmed in Britain as new restrictions are being placed on travel with each passing hour.

The headstone of Helen Marie Delaney, a survivor of the RMS Titanic, rests in St. Joseph's Cemetery in Council Bluffs.