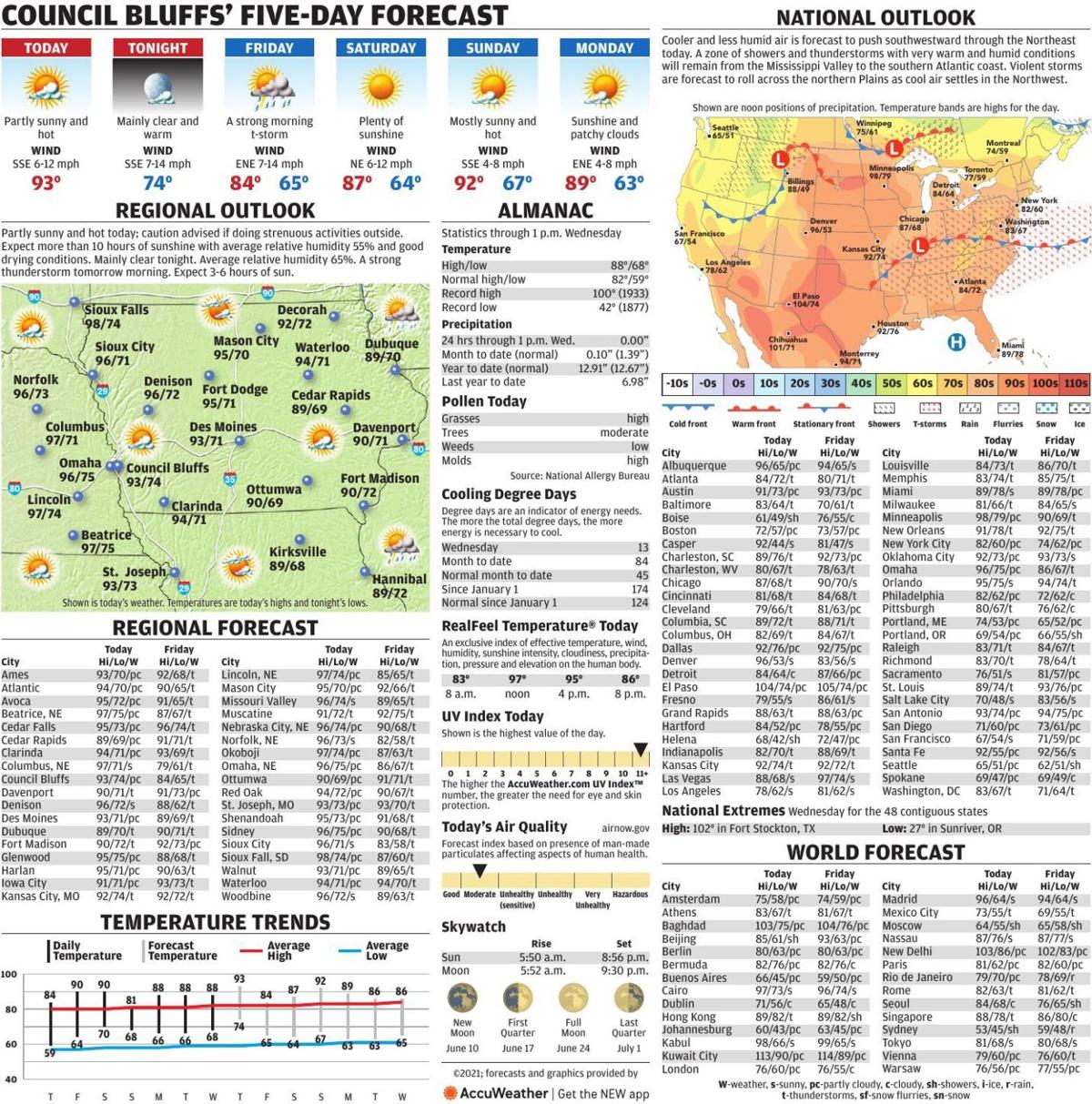 It hasn’t been this hot in early June since, well, a year ago.

A consistent run of days in the 90s continued on Wednesday, with temperatures around 91 in the afternoon. The high today is around 95, according to National Weather Service Meteorologist Corey Mead.

“It’s definitely been above normal in regard to daytime (temps),” said Mead, who’s with the service’s Valley, Nebraska, office said.

Highs are traditionally in the low 80s in early June, with lows in the low 60s, Mead said. June 4 marked the first day of 90-plus temperatures, followed by 94 on Saturday, 92 on Monday and 92 on Tuesday. Sunday’s cloud cover kept things at 85.

Friday brings a 70% chance of rain during the day and a 30% chance at night.

“It’s going to be an interesting day. It appears we’ll have some showers and storms move in on Friday morning. They could linger through the day,” Mead said.

“We’re not sure how widespread the (rain) activity will be during the afternoon. There could be some lingering clouds. Depending on how much cloud cover there is, it could be cooler than (89),” he said. “If there are fewer clouds, we could top 90 again.”

As for the rest of this month, Mead noted, “the confidence in the forecast decreases as we go further out,” but the June 16 to June 22 outlook calls for “a good chance of above normal temps.”

With the recent high temperatures, the Metro Area Planning Agency for the Council Bluffs-Omaha metro noted an ozone alert from the Douglas County (Nebraska) Health Department. Ground-level ozone concentrations are projected to be in the “moderate” range today, per the Federal Air Quality Index.

Tips to mitigate ozone problems include:

Go to airnow.gov for more information on air quality levels.

Today: Sunny, with a high near 95. Calm wind becoming south southeast 5 to 8 mph in the morning.

Tonight: A 20% chance of showers and thunderstorms after 4 a.m. Mostly clear, with a low around 72. South southeast wind 6 to 8 mph.

Friday night: A 30% chance of showers and thunderstorms before 1 a.m. Partly cloudy, with a low around 65. North wind 5 to 7 mph. New rainfall amounts of less than a tenth of an inch, except higher amounts possible in thunderstorms.

Saturday: Sunny, with a high near 90.

Saturday night: Clear, with a low around 66.

Sunday night: Mostly clear, with a low around 66.

Monday night: Mostly clear, with a low around 63.

Tuesday night: Mostly clear, with a low around 63. Sunny, with a high near 90.

A field of ice blocks on Mars was captured on camera

A field of ice blocks on Mars was captured on camera

Biden arrives in Geneva ahead of Putin meeting

Biden arrives in Geneva ahead of Putin meeting

Get the daily forecast and severe weather alerts in your inbox!

The heatwave continues in southwest Iowa.