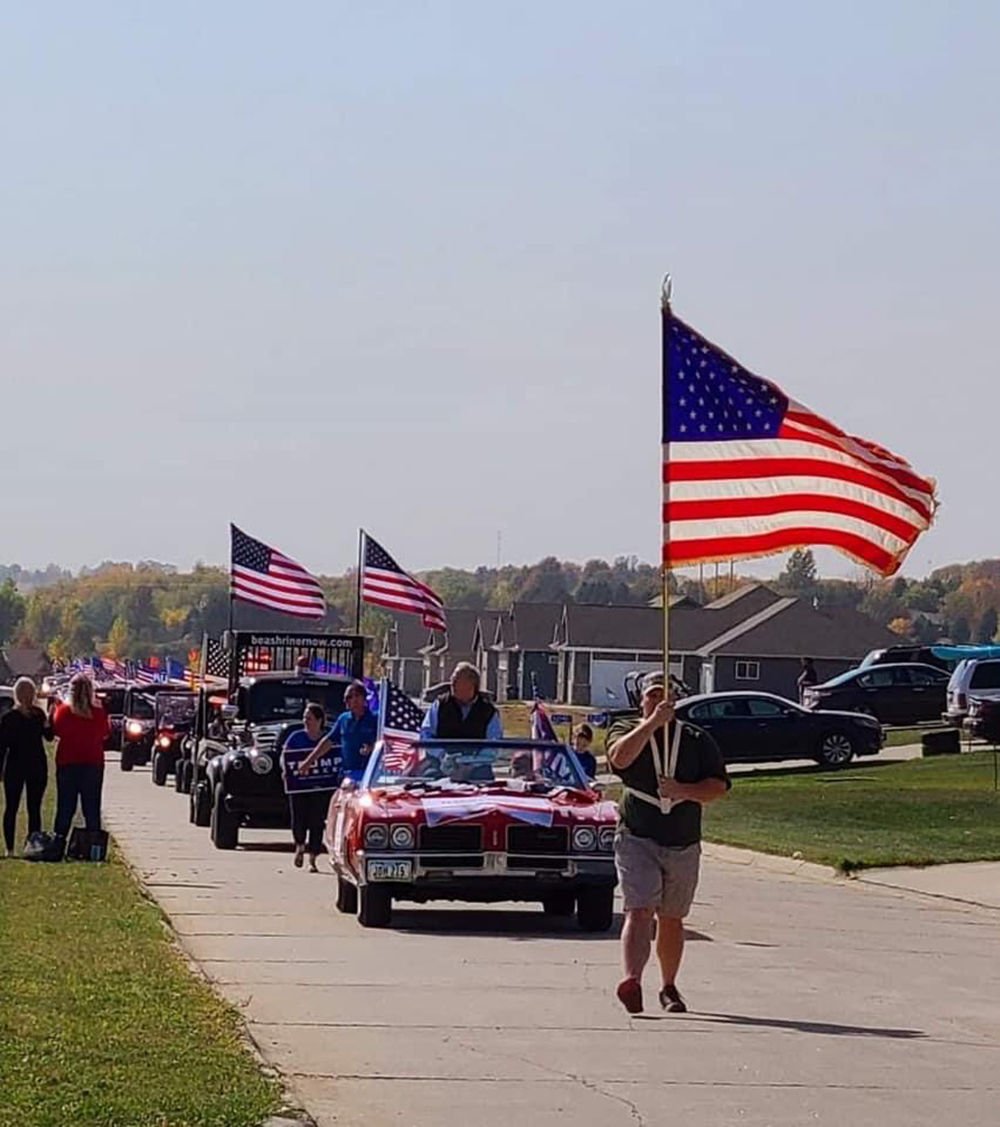 Former Rep. David Young, who is running to regain the 3rd Congressional District seat in the U.S. House of Representatives against Rep. Cindy Axne, looks on from a vehicle during a Mills County Republican Party Make America Great Again parade and rally Saturday in the Lake Ohana area.

Cars, trucks and utility-terrain vehicles lineup for a parade and rally held by the Mills County Republican Party.

Lake Ohana is a suburb of Glenwood. Saturday decorated classic cars and other vehicles, tractors, ATVs, bikes, strollers and walkers carrying the American flag began showing up for the Mills County Republican Party M.A.G.A. parade and rally. Including those participating in the parade — 65 entries — there were approximately 250 participants over all. Some of those were lining the market area and street in support of President Donald Trump and Republicans running on the 2020 ticket.

It was an amazing day! Not only did Mills County participants show up, but also people from Omaha to Page County, Iowa, and even someone from Illinois joined the parade. The whole idea started with just having a neighborhood parade and food, with David Young as the honored guest, and grew with leaps and bounds from there!

The grand marshal for the parade, which began at 11 a.m. at the Lake Ohana Market, was Young, who is running for Congress in the 3rd Congressional District of Iowa.

The parade began and ran through the Lake Ohana neighborhood on 229th Street. At the end of the long street it did a turn-around back to the market, where speakers took the stage sharing thoughts on what America needs to do in order to make sure our freedoms don’t go aground.

Gary McNutt of the Mills County Republican Party gave the invocation. The speakers included: Sandi Winton and Jeni Kirsch, the event organizers, Tamara Scott, Iowa National Committee spokeswoman, state Sen. Mark Costello and Sean Herrick and Brittany Rockwell, local Trump campaign spokespersons. All speakers encouraged those in attendance to come together and unite in order to bring America back to where we need to be. They also shared positive thoughts on how our president is running the country, and how they want to help him do even more for us.

Young gave the final speech encouraging unity, and not the type of chaos that has resulted in so many businesses being destroyed by radicals, and innocent lives being taken. The words of encouragement he and the other speakers shared brought many cheers and joy to the hearts of the listeners. Following the speakers there was live band entertainment, and food provided by Lake Ohana’s Market Backroom Lounge.

Not only was it an amazing day for all participants, but it was a beautiful day, both weather wise and reflection wise, as we look forward to having President Trump for four more years!

Murphy column: What’s next for the Republican Party after Trump?

For many Republicans, Donald Trump’s divorce — or separation, at least — from the GOP has begun.

Positively Speaking: Reach across the aisle in the spirit of Lincoln

I don’t think I’ll find many that will disagree that our nation is in turmoil. From an election that a large minority of our friends and neigh…

Virginia Heffernan: What the world needs now is a little Hallmark Channel

Some years ago, my partner's father, a man then in his 70s and a lifelong Republican, told me he'd given up Fox News. In the past, Fox had struck him as a useful conservative alternative to CNN. Now it was the opposite of conservative. He couldn't vote for Trump, and he wouldn't watch Fox for the same reason: too decadent, illogical, tawdry. Had he gone back to CNN? I asked. No, he said. The ...

Richard Kyte: Truth is only reliable foundation for justice

Opinion: For decades we have told our youth to “stay true to yourself” and “stick up for what you believe,” as if there were some virtue in stubborn persistence alone.

Commentary: Vice President Pence can preside but not decide

Since the presidential election on Nov. 3, the rule of law has held. That is one of the most noteworthy, and inspiring, developments in the entire history of U.S. law. Whether they were appointed by Presidents Donald Trump or Barack Obama, by Presidents Bill Clinton or George W. Bush, federal judges have shown fidelity to the law by rejecting frivolous and evidence-free efforts by Trump to ...

National Views: Trump was rightly impeached. Now the Senate must do its job and convict

In voting Wednesday to impeach President Donald Trump — for a second time — the House responded in the only responsible way it could to Trump’s outrageous encouragement of the domestic terrorists who invaded the Capitol last week. Ideally, the Senate would reconvene on an emergency basis and try and convict Trump before he makes the exit from the White House next week — an exit that he tried ...

Among the amazing scenes in our Capitol during the failed insurrection of Jan. 6, few were more remarkable than a brief speech by Sen. Kelly Loeffler, of Georgia, shortly after Congress reconvened. Loeffler, addressing Vice President Mike Pence, said, in part: “Mr. President, when I arrived in Washington this morning, I fully intended to object to the certification of the electoral votes. ...

Positively Speaking: Will you choose to be a Victor or Victim in 2021?

Last week we spoke of the choice to make 2021 a better year and not remain stuck in our past. To act as if you have no power to change the cou…

The Ethical Life podcast: Unity or accountability, which is more important after an insurrection?

Episode 5: We also discuss whether the Republican Party would be in a stronger place today had Hillary Clinton defeated Donald Trump in 2016.

Commentary: Bankruptcy is the solution to the student loan crisis

To understand why we have a student loan crisis — and with $1.6 trillion in outstanding student debt, it surely is a crisis — just look at the U.S. bankruptcy code. In 1965, Congress passed the Higher Education Act, part of President Lyndon Johnson’s Great Society. On the one hand, the new law established federal grants and loan programs to ease the monetary burden of attending college, ...

Former Rep. David Young, who is running to regain the 3rd Congressional District seat in the U.S. House of Representatives against Rep. Cindy Axne, looks on from a vehicle during a Mills County Republican Party Make America Great Again parade and rally Saturday in the Lake Ohana area.

Cars, trucks and utility-terrain vehicles lineup for a parade and rally held by the Mills County Republican Party.