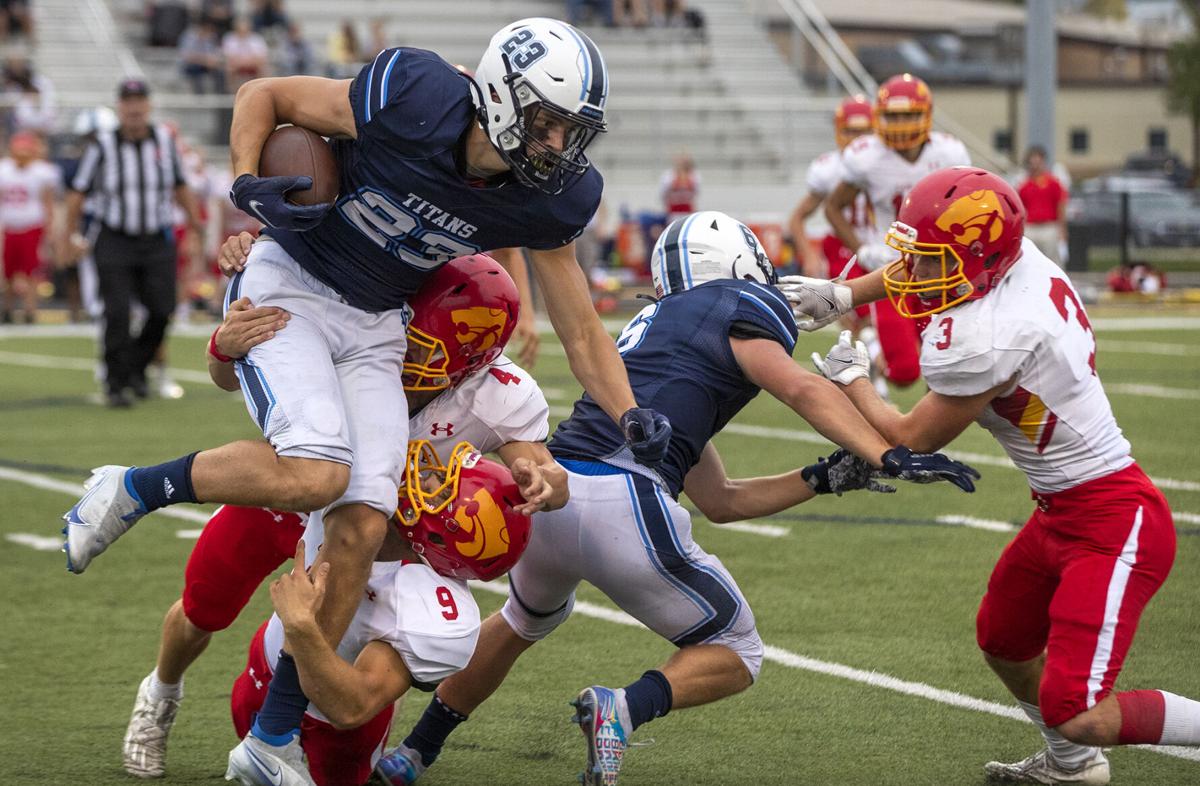 Lewis Central’s Brayden Loftin (23) tries to barrel over Carlisle’s Carter Prenosil (4) and Liam Smith (9) during the first quarter on Friday. 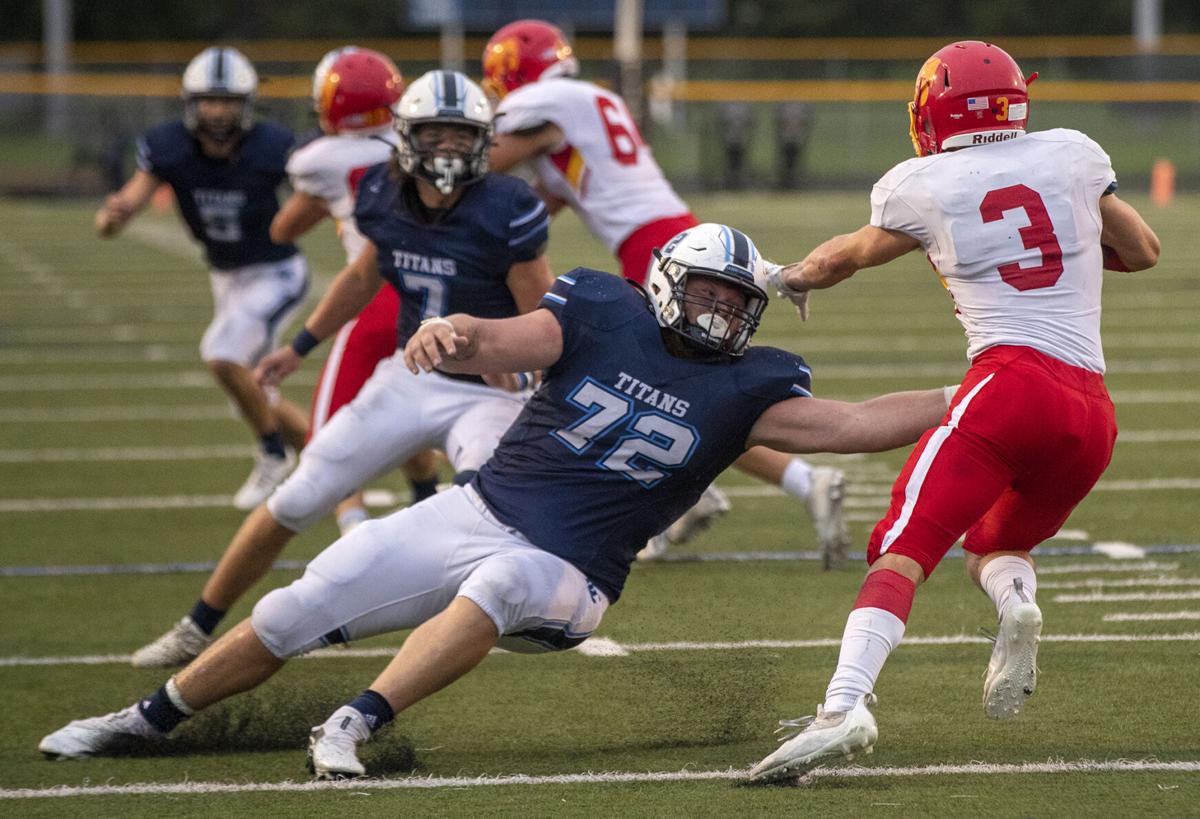 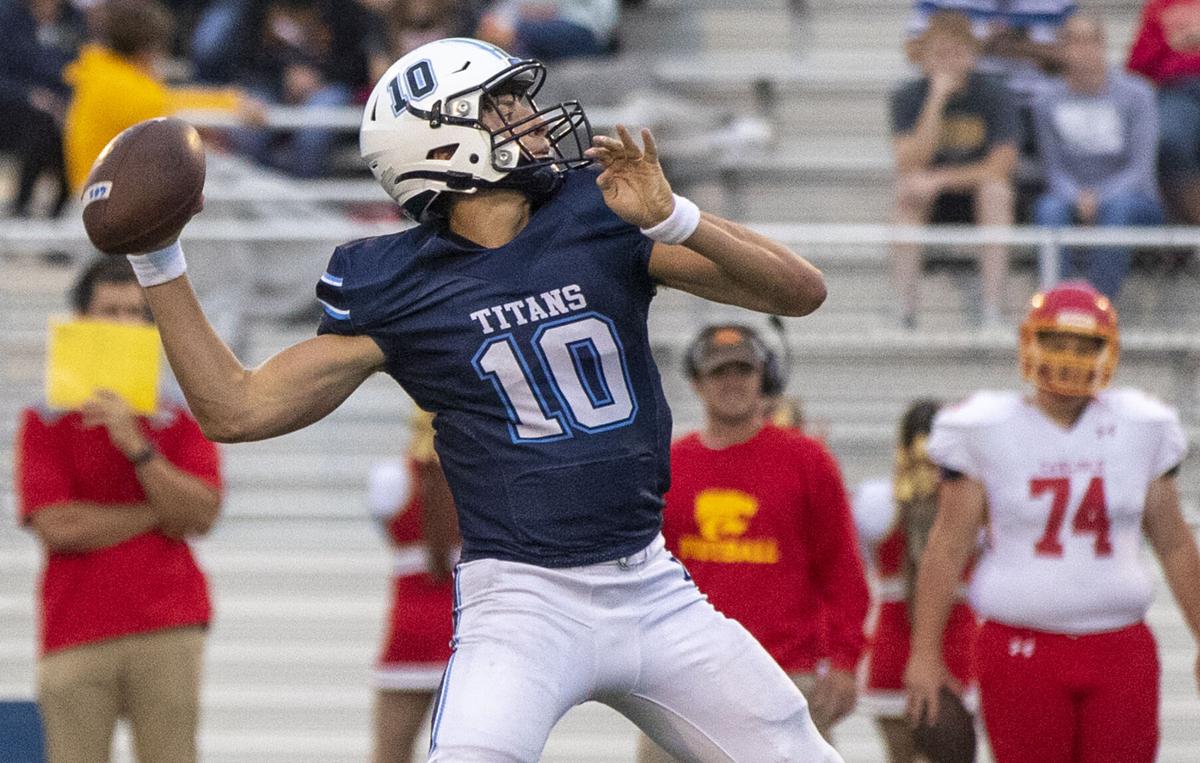 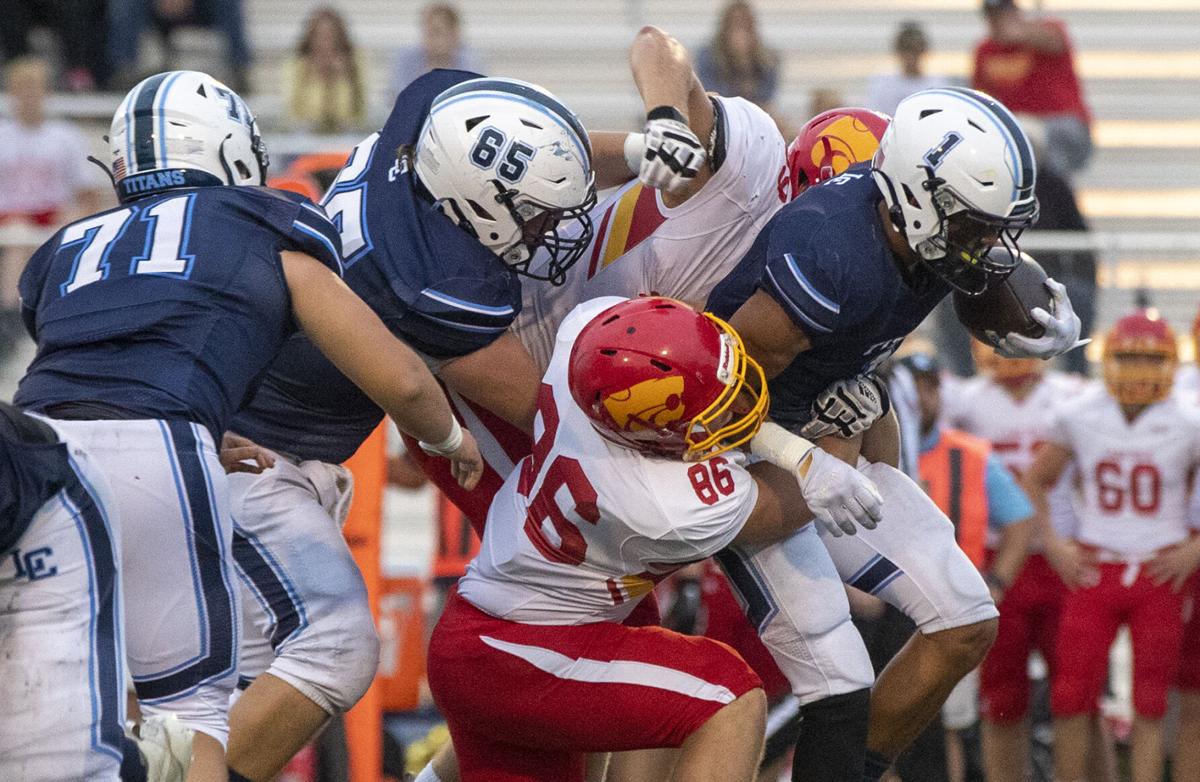 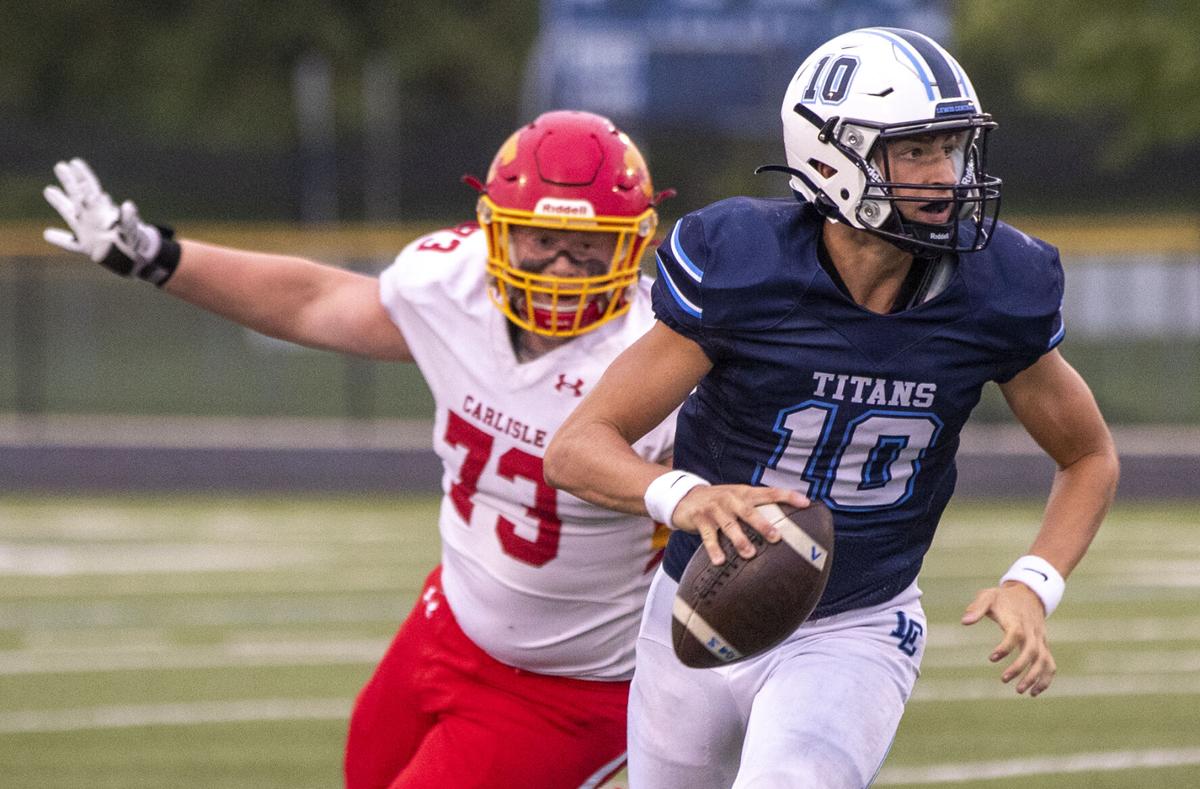 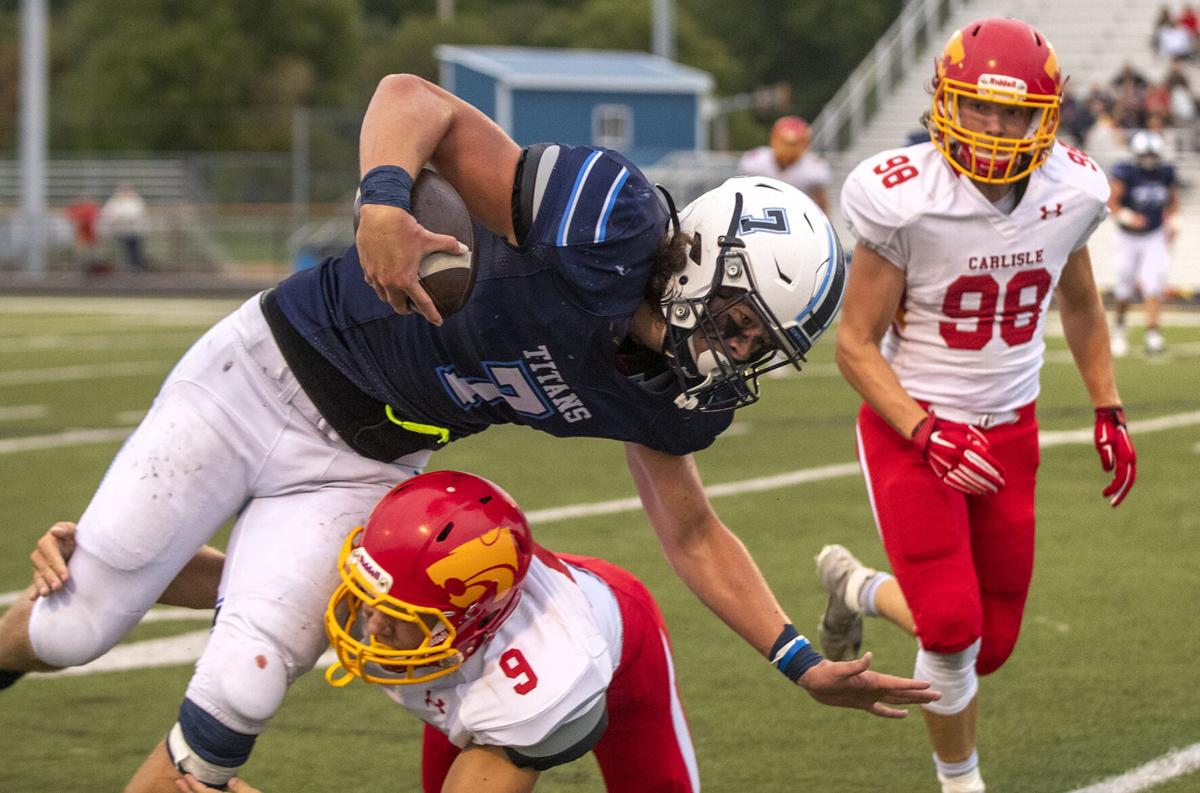 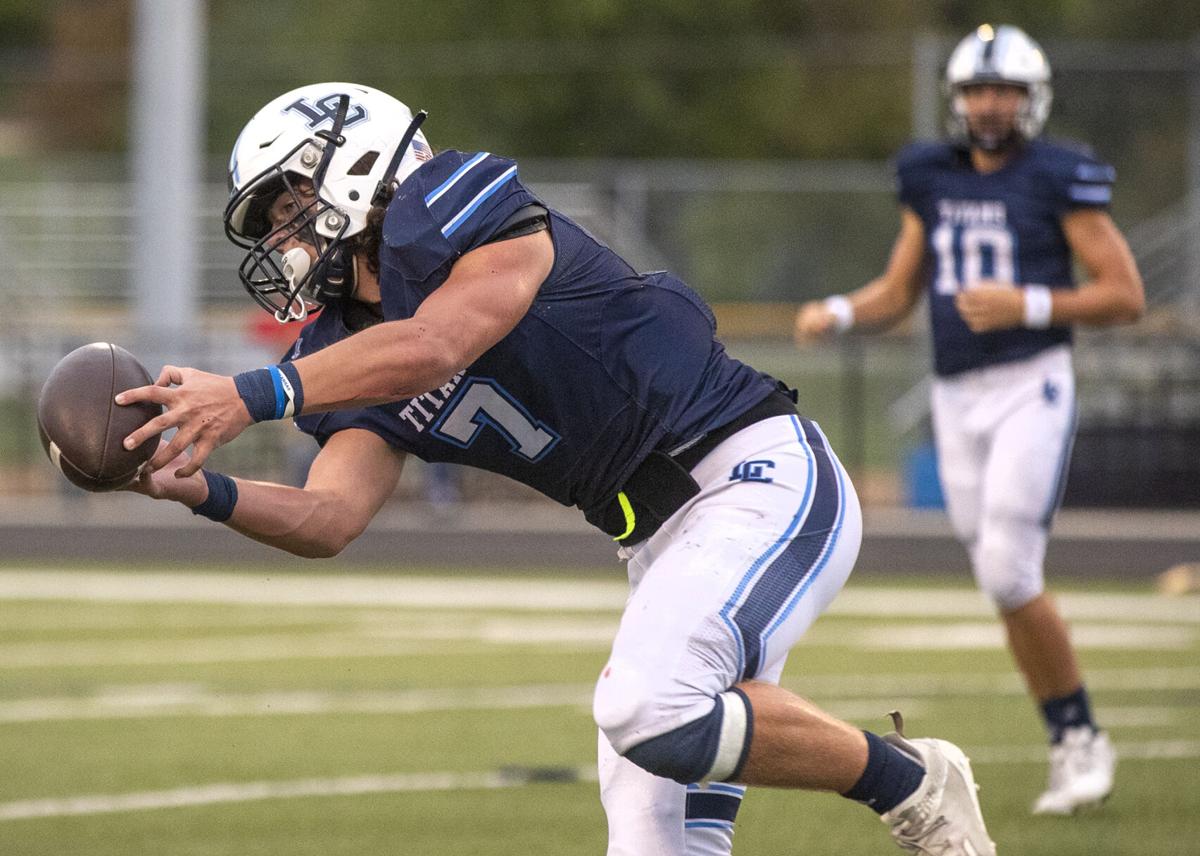 Lewis Central’s Wyatt Hatcher (7) stretches out to make a catch during the first quarter on Friday, Sept. 3, 2021.

Lewis Central football gave up the opening touchdown in its home opener on Friday, but ran away the rest of the way, scoring on every one of its offensive possessions to win 70-22 over Carlisle.

The win was the first of the season for the Titans, who bounced back after losing to Harlan in week one.

“Obviously, anytime you have the game that you had last week, there was a lot that needed to be fixed,” head coach Justin Kammrad said. “The guys were challenged all week in many different aspects. They responded.”

Carlisle ran the opening kickoff back to the 13-yard line and scored four plays later on a 10yard run by senior Archer Ogbourne. The Wildcats converted the two-point try to take an eight-point lead less than two minutes into the game.

Junior Jonathan Humpal exploded on the second play of the drive for a 61-yard rushing touchdown. The touchdown cut the Wildcats lead to one.

“We gave up the kickoff right away and gave up eight points right away and I think that was a wake up call,” Kammrad said. “For whatever reason that’s the game of football and that’s how it goes. Our guys played well all around. We did a lot of good things and we’ll continue to get better.”

After a 12-yard run on the first play, the Titans’ defense stepped up, forcing a punt which led to Humpal’s second touchdown on the game four plays later.

Lewis Central forced a three and out on the next possession.

Junior quarterback Braylon Kammrad surgically dissected the defense on the following drive completing four passes for 44 yards, including a 6-yard touchdown pass to senior Wyatt Hatcher to give the Titans a 21-8 lead, with just over a minute left in the first quarter.

Lewis Central forced the punt, giving the Titans the ball at the 15-yard line with just under 10 minutes to go in the half.

The Wildcats started their next possession at the 16-yard line, but it ended in disaster three plays later when junior Chase Wallace scooped up a fumble and ran into the end zone to give the Titans a 35-8 lead with 7:30 left in the first half.

The Titans forced the second three and out of the half, setting up their offense at their 42-yard line. Lewis Central drove down the field on a nine-play, four-minute drive that was capped with a four-yard run by Humpal, his third touchdown on the evening.

Humpal finished the game with 113 yards on 21 carries and two touchdowns.

“He’s a phenomenal athlete,” Justin Kammrad said. “When you’re able to get him in space, he’s able to make people miss and that’s his goal. He has to speed to take off and go. If we’re able to get him out there in space and get him going it’s really good.

“You have to give a lot of credit to those guys up front, the offensive line. It takes a special person to put their hand down in the dirt and play offensive line. Those guys embrace it and they love it.”

Humpal gave his offensive credit to the offensive line.

“I have to give it to me O-line,” he said. “They made the holes for me to be able to go down and score for us.”

An offensive pass interference call backed up the Titans to the 35-yard line, but Kammrad found his way to the end zone on a scramble to give Lewis Central a 41-point lead, which would hold through the rest of the half.

Kammrad finished the game with 305 passing yards on 19 completions and two rushing touchdowns.

Lewis Central’s defense finished with 36.5 tackles, including six for a loss, and held the Wildcats to just 23 yards passing.

“It’s a great feeling right now, but we have to come back and get stronger next week,” senior Hunter Deyo said. “… We knew they wanted to run the ball so we loaded the box.”

Lewis Central picked up right it left off in the second half, going 58 yards in seven plays on a five-minute drive. Senior quarterback Ethen Fishell scored the touchdown on a 36-yard run.

Carlisle found some success in the next drive, going 80 yards in nine plays over five and half minutes to cut the lead to 56-15.

Fishell connected with junior Boston Hensley on a 67-yard touchdown five plays into the next drive to take a 63-15 lead with 10:21 left in the game. Carlise responded on the next possession on a four-play, 80-yard drive to make the score 63-22.

Lewis Central finished the game off with a 66-yard touchdown run from senior Eli Sunderman and time expired on Carlisle’s next possession.

Justin Kammrad said he was happy with how the offense performed together as a unit.

Lewis Central is in action next at 7 p.m. on Friday at home against Norwalk.

WINTERSET — The battle for the Class 4A district six football title went right down to the wire as a lot thought it would.

Abraham Lincoln volleyball looked to be an underdog on paper in Thursday’s Class 5A — Region 2 semifinal at Class 5A No. 8 West Des Moines Valley.

Underwood soars on to second round

UNDERWOOD — Class 1A No. 2 Underwood football scored 49 points in the first half in the first round of the playoffs at home on Friday against …

Area runners dominate in Class 1A

The Class 1A state qualifying meet will be filled with plenty of local runners after multiple teams, and runners clinched their spot on Thursd…

Lewis Central volleyball and Class 4A No. 10 Glenwood have played in multiple classics this season and Thursday's Class 4A - Region 1 semifina…

Underwood senior Bryce Patten said he felt he could have run faster in Thursday’s Class 2A State Qualifying meet in Gowire, but his ninth-plac…

Abraham Lincoln volleyball battled to win set four 33-31 against Class 5A No. 8 West Des Moines Valley to force a fifth set during Thursday's …

Lewis Central’s Brayden Loftin (23) tries to barrel over Carlisle’s Carter Prenosil (4) and Liam Smith (9) during the first quarter on Friday.

Lewis Central’s Wyatt Hatcher (7) stretches out to make a catch during the first quarter on Friday, Sept. 3, 2021.