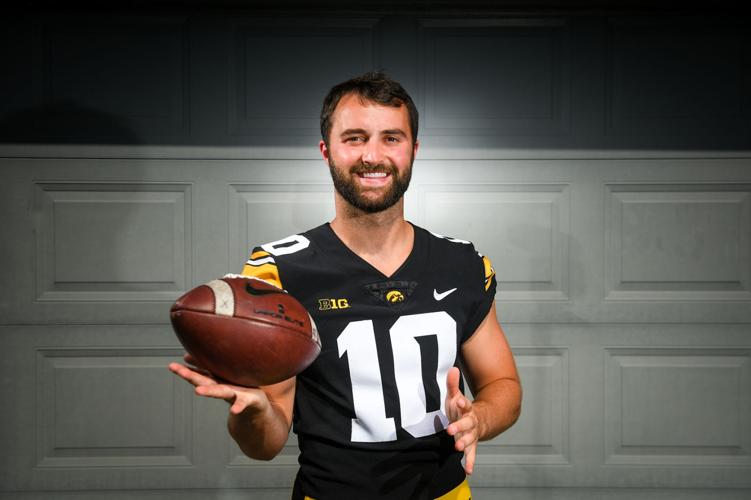 Iowa placekicker Caleb Shudak (10) poses for a photo during the Iowa Hawkeye football media day on Friday, Aug. 13, 2021 in Iowa City. Shudak and the Hawkeyes play Penn State in a top-five matchup on Saturday. 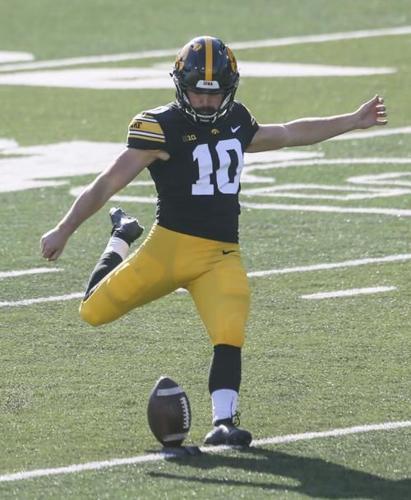 Iowa’s Caleb Shudak kicks off during the Hawkeyes’ game against Northwestern at Kinnick Stadium last season. 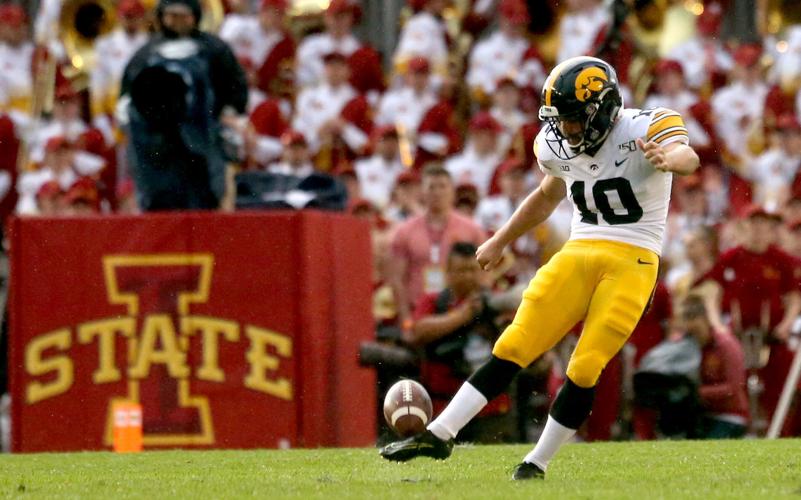 Iowa’s Caleb Shudak kicks off to Iowa State during the first half of the Hawkeyes’ 18-17 win at Jack Trice Stadium in 2019.

When No. 4 Penn State and No. 3 Iowa square off on Saturday at Kinnick, it will be the first time the Big Ten has had a top 5 game without Ohio State or Michigan included since 1962.

Lewis Central graduate and Iowa senior kicker Caleb Shudak has been a key part of the Hawkeyes’ success and will get to partake in this historic game. Despite the magnitude of the game, the moment doesn’t seem to be affecting Shudak or his teammates.

“I don’t think it’s really hit a whole lot of us,” he said. “We talked about how it’s a big game. We’re excited to play a really good Penn State team. I think so many guys are focused on getting better.

“We have a pretty young team. Seeing those young guys improve every week, it just gets up more excited realizing we have better football in front of us. I think it’s hard to grasp that, because we’re still a young team. Realizing that we’re not quite to our full potential is one of the things I’m excited for. I really haven’t thought much about it being a top-five match up. It’s going to be a fun opportunity to play one of those once in a lifetime games that I’m definitely not going to look past.”

Individually, Shudak has also had a successful season. He’s 8 of 9 on field goals, with a season-long of 59 yards. His lone miss was on a 50-yard try. He’s a perfect 20-for-20 on extra points as well.

“It’s been extremely fun and really rewarding so far,” Shudak said about his senior season. “We have a lot of season left, but being able to see some of those six years of work come to fruition.

“It gives me a lot of confidence and it’s fun doing it with a lot of my best friends and some guys that I hang out with 24/7 outside of football. Being able to go out there and play really good football for them and help the team win is just an awesome feeling.”

Penn State currently holds a 17-13 lead in the all-time series rivalry, but the Hawkeyes won the last meeting, a 41-21 victory at State College, Pennsylvania.

The teams have looked impressive to start the season. Both the Hawkeyes and Nittany Lions are 5-0 overall and 2-0 in Big Ten play.

Last Saturday, Penn State shut out Indiana in a 24-0 win.

Iowa handled business at home with a 30-7 win over Kent State and powered through adversity with a 24-14 win against Colorado State.

Last Friday night, Iowa trounced Maryland 51-14, in a game that many labeled as a trap game.

“I don’t want to speak for anybody, but I think we’re all extremely happy. We’ve been working really hard all year, since January, for these kind of results. To see it pay off on the field is extremely rewarding. It’s kind of nice to see the fruits of your labor come through,” Shudak said. “”We haven’t quite played our best ball yet. I think we’re all ever more excited that we’re still improving out there.”

Coming into the season, Iowa was ranked No. 18 in both the AP and Coaches polls. But, the success hasn’t been a surprise to Shudak and his teammates thus far. Coming into 2021, Shudak said the team set high goals, and those haven’t changed yet.

“We establish goals at the beginning of the season. One of our goals is to practice at a championship level, is how we say. That means to have our best practice every day. I think we’ve done a very good job so far, coming in to compete every day.”

Shudak and the Hawkeyes will kickoff against Penn State at 3 p.m. on Saturday. The game will be broadcasted on Fox Network.

History made by all at inaugural state tourney, Riverside's Allen a state champion

In the inaugural IGHSAU-sanctioned state championships, a Titan and Bulldog reached Friday’s finals representing their schools as history was …

Treynor outscored St. Albert 23-7 in the first quarter and never let of the gas as they powered by the Falcons 66-32 in Council Bluffs on Satu…

Iowa placekicker Caleb Shudak (10) poses for a photo during the Iowa Hawkeye football media day on Friday, Aug. 13, 2021 in Iowa City. Shudak and the Hawkeyes play Penn State in a top-five matchup on Saturday.

Iowa’s Caleb Shudak kicks off during the Hawkeyes’ game against Northwestern at Kinnick Stadium last season.

Iowa’s Caleb Shudak kicks off to Iowa State during the first half of the Hawkeyes’ 18-17 win at Jack Trice Stadium in 2019.