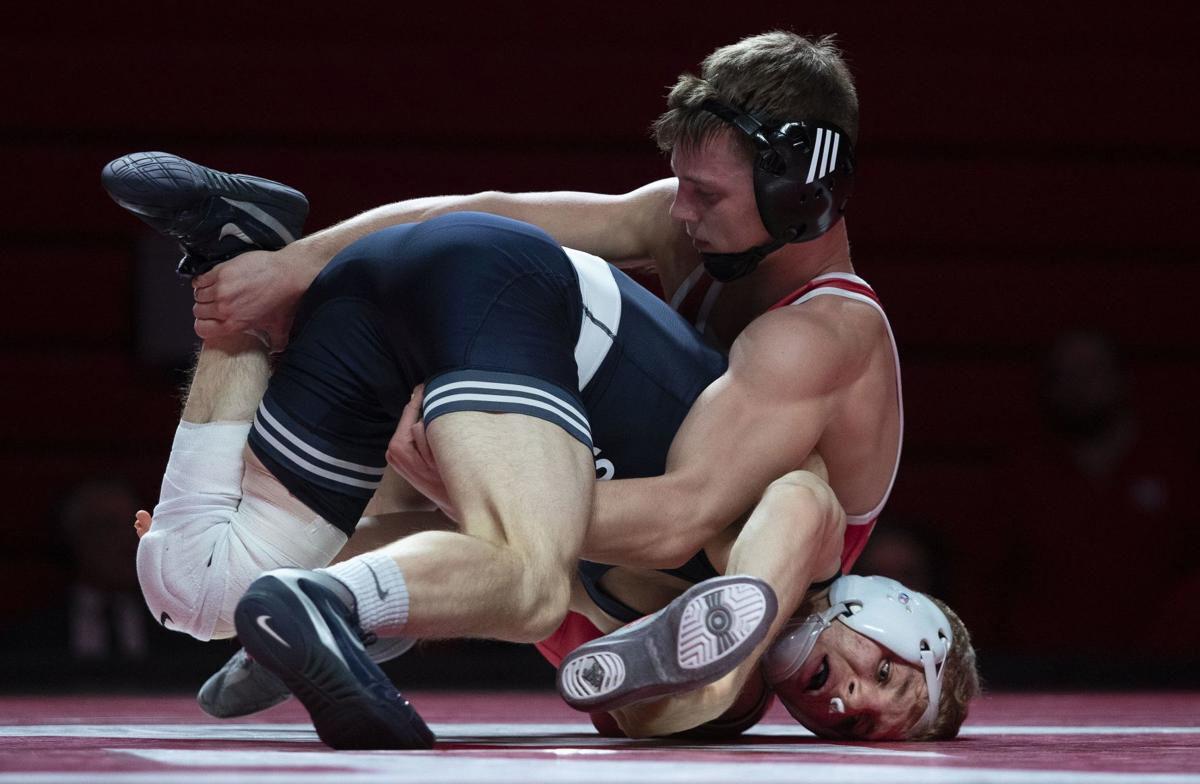 Nebraska’s Alex Thomsen, a former Underwood star, gains contol over Penn State’s Brandon Meredith during their match on January 24, 2020 at the Devaney Center in Lincoln, Nebraska. Thomsen won his 60-kg Greco-Roman weight class during the first day of Senior Nationals in Coralville. 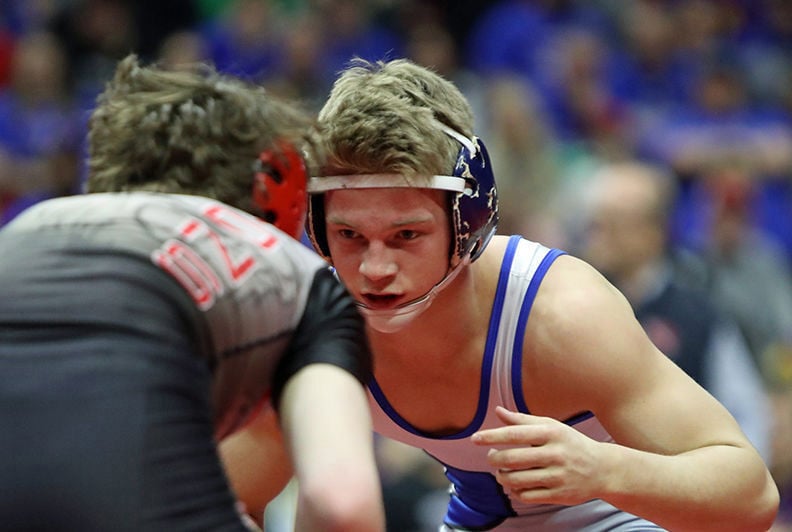 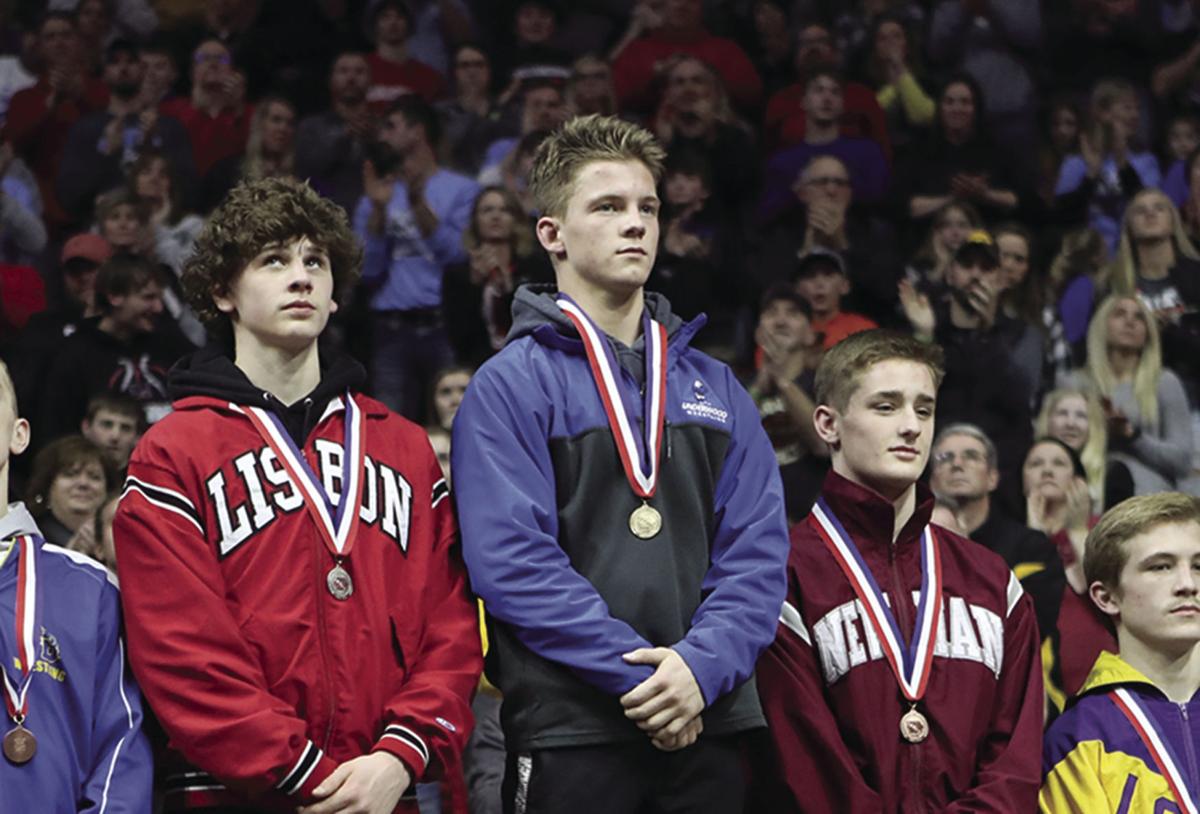 Thomsen, who was seeded ninth for the Friday event, earned a 5-3 decision over Mosha Schwartz in the final. He went 4-0 on the day, which also included a 10-4 win over top-seeded Taylor LaMont in the quarterfinals.

“All of the support that’s been shown the past couple days has been unbelievable and I can’t thank y’all enough!” Thomsen tweeted on Saturday. “60 kg Senior Greco-Roman National Champion!”

“This was another opportunity for me to show another side of my wrestling,” Thomsen told the Des Moines Register after the win. “I have the hips, the power, the explosiveness, and the mat awareness. That final match, it was all mat awareness. I had to be smart, keep my butt in the center. I love greco. When I committed to Nebraska, my goal was to be the best I could possibly be, no matter the style, and our coaches are allowing us to follow our dreams, and that’s been really cool.”

Thomsen went 190-1 while at Underwood and was a four-time state champion. He won at 113 pounds in Class 1-A as a freshman in 2015 and topped the 126-pound field the next three seasons.

Jaydin Eierman, a graduate transfer preparing for his senior season with Iowa, earned a fifth-place finish at 65 kilograms Sunday and endeared himself to Iowa fans in attendance at the Xtream Arena with the aggressive way he attacked throughout the weekend.

After losing 10-0 by technical fall to three-time Stanford and Ohio State all-American and top-seeded Joey McKenna in the consolation semifinals, Eierman pinned former Rutgers all-American Matt Kolodzik in his final match of the tournament.

After giving up a step out point early in his fifth-place match, Eierman was able to put Kolodzik on his back and recorded the fall in 1 minute, 9 seconds.

He finished the tournament with a 5-2 record that included two technical falls, a pair of pins and an appreciation of where he’s at.

“It was a good situation. There was some good, some bad, some work to do,’’ Eierman said. “That’s OK, that’s what this time of year is about. The experience, it was good. Every match, I could feel the energy from the Hawkeye fans. They’re into it.’’

For nearly the entire field, the Senior Nationals marked a return to competition after a long layoff because of concerns over COVID-19.

That was the case for former Iowa State wrestler Kyven Gadson, who finished second at 97 kilograms.

After advancing past 2016 Olympic champion Kyle Snyder in the semifinals, Gadson dropped a 12-5 decision to Kollin Moore in the championship match.

The runner-up to Iowa’s Spencer Lee for the 2020 Dan Hodge Trophy presented to the top collegiate wrestler, the four-time Ohio State all-American was impressed with how sharp Gadson looked as he won his first three matches of the weekend.

Moore felt a quick start was imperative and he grabbed an 8-4 lead by the break in Sunday’s final against the former Cyclone NCAA champion, a match Moore wanted in part because he wasn’t able to compete as a top seed at the canceled 2020 NCAA Championships.

“This definitely proved to me that I’ve been doing the right things. I didn’t let it distract me, get me down or lead me down the wrong path,’’ Moore said. “It’s good to see that I stayed on the right path and stuck it out. I finally got a big win here.’’

Moore was one of two Big Ten wrestlers to win titles.

Michigan’s Mason Parris beat Arizona State’s Tanner Hall by technical fall in the finals at 125 kilos and he said the depth of heavyweight competition in the Big Ten prepared him well for the national stage.

“That taught me how compete hard and compete with the best guys,’’ Parris said.

Vitali Aruaju at 57 kilograms and Logan Massa at 74 kilograms were the only top seeds to earn titles at the Senior Nationals.

Andrew Alirez, a ninth-seeded wrestler from Northern Colorado who won the title at 65 kilograms was named the outstanding wrestler of the tournament, while second-seeded Gabe Dean won at 86 kilograms.

Facing Ryan Deakin of Northwestern, Carr trailed 3-0 at the break and dropped a 5-2 decision in the fifth-place match after falling 9-5 to North Carolina State wrestler Hayden Hidlay in the consolation semifinals.

Foster reached the third-place match with a 12-2 win over former Virginia Tech wrestler David McFadden in the consolation semifinals and led Trent Hidlay of North Carolina State 4-1 in the second period before dropping a 7-4 decision.

Lujan finished the tournament with an 8-4 victory over former Central Michigan wrestler CJ Brucki to claim seventh after missing an opportunity to compete for a spot in the top six when he dropped a consolation quarterfinal to McFadden 10-8.

Lujan trailed 4-0 at the break and 8-4 into the final minute of the second period but tied the bout with a four-point move with :42 remaining before McFadden scored on a two-point move in the final seconds to advance.

Schultz finished seven places higher than his seed, placing fifth at 97 kg, while Lance was seventh at 125 kg. TJ Dudley, who was a three-time All-American at Nebraska, placed fourth at 97 kg.

— The Daily Nonpareil and Omaha World-Herald contributed to this report.

"This was the win I really needed to get my confidence back," Husker wrestler Alex Thomsen said.

Nebraska’s Alex Thomsen, a former Underwood star, gains contol over Penn State’s Brandon Meredith during their match on January 24, 2020 at the Devaney Center in Lincoln, Nebraska. Thomsen won his 60-kg Greco-Roman weight class during the first day of Senior Nationals in Coralville.