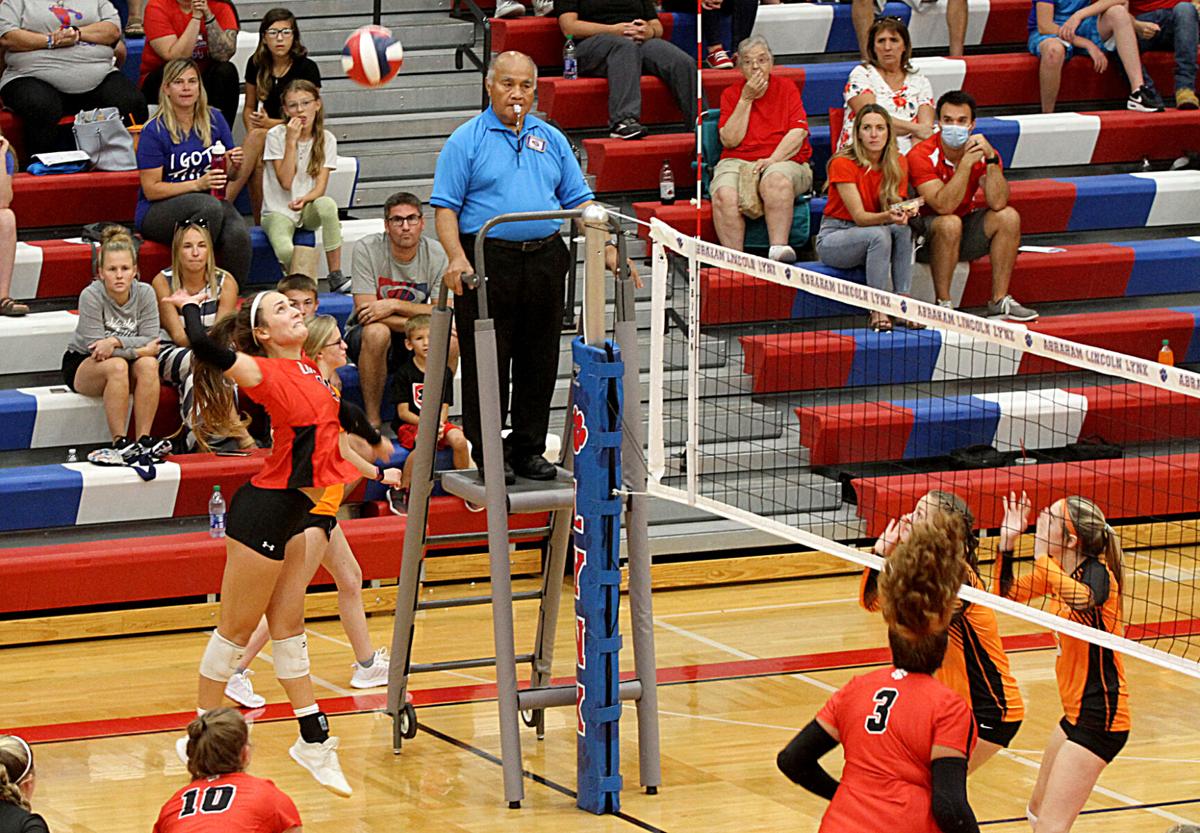 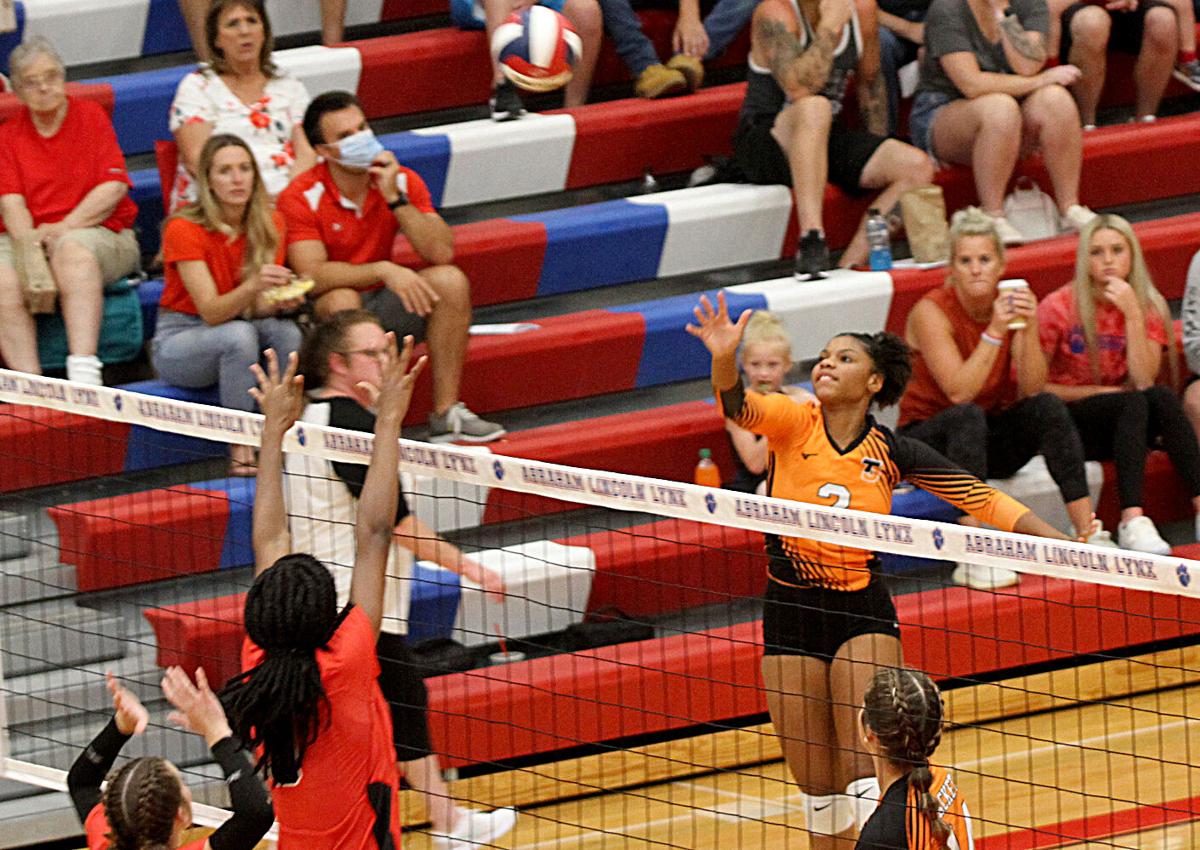 Thomas Jefferson senior Jazlynn Sanders goes up for the kill on Thursday in a match against Abraham Lincoln. 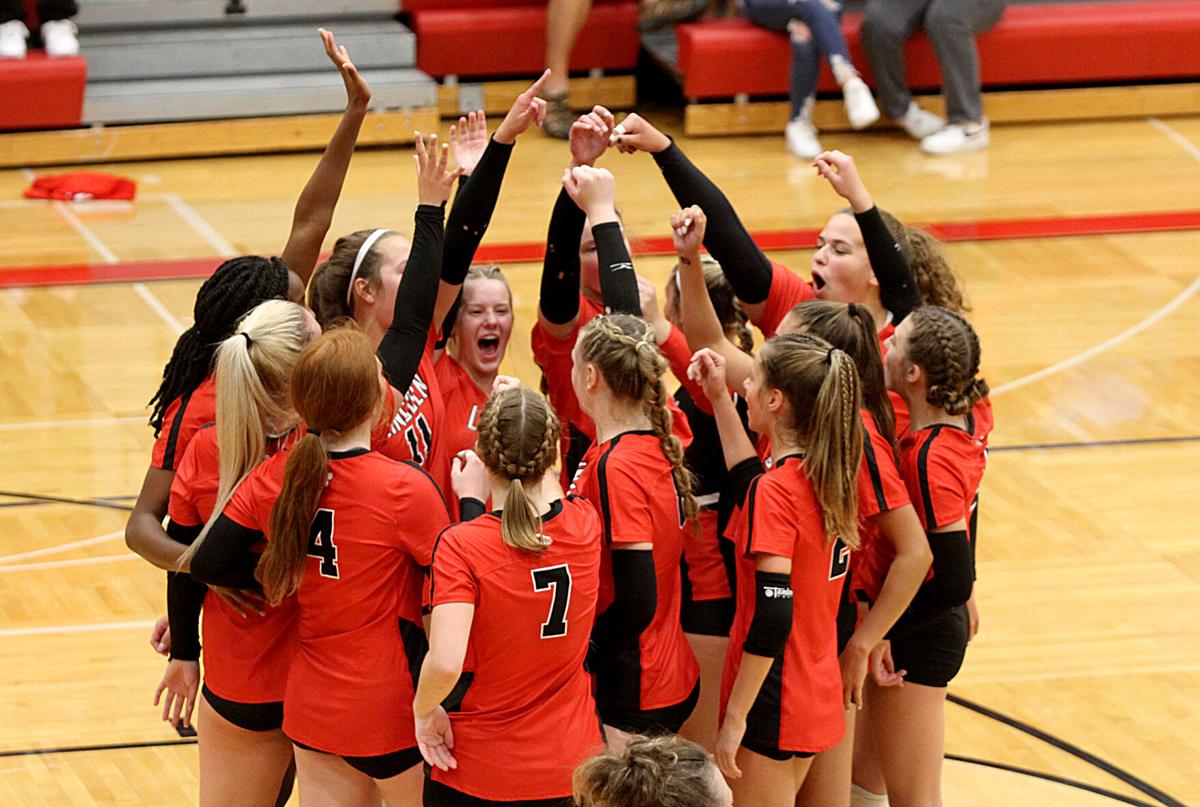 The Abraham Lincoln volleyball team huddles before a match earlier this year.

Abraham Lincoln volleyball had to battle in the final two sets but pulled out a 3-0 sweep over Thomas Jefferson at home on Thursday night, winning 25-15, 25-22, 25-21.

Senior Baylie Girres played a big role in the victory, finishing with 13 kills and 13 digs.

“It always feels really good when you beat a city rival team,” Girres said. “It was really good.”

“I thought we came out pretty hungry in that first set,” she said. ‘We dipped a little, but then we fought back and got things done. I think we kind of opened a little tight in the next two because we were worried about getting the win instead of worrying about that ball.

“The whole team adjusted well. We always know it’s a dog fight with T.J. They’re going to give us everything they have and I’m just glad we got the win.”

“We’re starting to get it figured out,” he said. “We’re playing good ball. We played the No. 1 team in the state last week and almost upset them in the first set. We played a really good A.L. team, that’s also starting to figure its stuff out as the season progress.

“We had them on their heels there for a minute, we just couldn’t put it away, because their big weapons really showed up at the end and took care of business.”

Abraham Lincoln led 4-3 in the first set before going on a 5-0 run due to kills from Girres and sophomore Kelsi Nelson, forcing Thomas Jefferson to take a timeout.

Things didn’t get any easier after the timeout as the Lynx continued to pull away, and back-to-back Girres to put A.L. up 21-13 forced another T.J. timeout.

Thomas Jefferson scored the first two points out of the timeout on a service error and a kill by freshman Rylee Perrine, but Abraham Lincoln closed the set out on a 4-0 run to win 25-15, after a block from Girres and junior Jeena Carle and a kill from Girres.

Girres had five kills in set one.

The Yellow Jackets led 15-11 after a kill from junior Samara Alcarez, an ace from senior Aaliyah Neve and two kills from freshman Izlea Macklem.

Abraham Lincoln turned up the pressure after the timeout, going on a 4-1 run with an ace from Nelson, a block from freshman Lydia Dix and Carle, and a kill from Girres, forcing T.J. to take a timeout.

The two teams traded points back and forth, but A.L. took a 22-21 lead on a kill from Girres, causing Thomas Jefferson to take a timeout.

T.J. battled hard out of the timeout and scored one more point, but two kills from Girres and Romano won the set 25-22 for Abraham Lincoln.

The third set was back and forth, with neither team able to go on a long run. Abraham Lincoln found momentum going on a 4-1 run with an ace from Nelson and three T.J. errors to take a 19-17 lead, leading to a Thomas Jefferson timeout.

Girres spiked down another kill and junior Josi Clark served an ace out of the timeout, making Thomas Jefferson call another quick timeout down 21-17.

Girres scored on another kill out of the timeout, but three straight A.L. errors and a kill by senior Jazlynn Sanders drew the Jackets within 22-21.

Abraham Lincoln took advantage of an attacking error and won the match after two aces from Girres, giving A.L. the match-deciding set by a score of 25-21.

“We kind of got into a little slump in both of those sets,” Girres said about sets two and three. “We switched up our serve receive a little bit and picked up and fought back, and I thought we did pretty good on that.”

“Molly is obviously why I get all those kills, because of her great sets and then our passers,” Girres said. “I thought our passers did a good job tonight. We had a lot of subsitions and people stepping up.”

Romano finished the game with 23 assists and four kills.

“Jazlynn Sanders played really well,” White said. “She struggled in the first set, but second set when we moved her around, she really took charge and honed in our team. Another player that stood out incredibly well was Izlea Macklem. She’s a freshman and she had four kills and really did a good job on defense as well.”

Darrington was impressed with Girres performance, as well as others on Abraham Lincoln.

“Bailey Girres is our four-year starter. She’s our big power. When she decides to take over a game, she certainly can do it. ... I really feel like Azaria (Green had a good game). When her and Molly connected well she hit the ball hard. Jeena Carle had an amazing game. She came out on fire and just did really.”

“It’s always a huge confidence builder,” Darrington said. “We go to Southeast Polk this weekend, so it’s always nice to have that big win.”

Graves hopes for success in year one at TJ

Thomas Jefferson girls basketball will have a new leader this year with first-year head coach Shelby Graves taking over.

Lynx hope to find mix between youth and expereince

St. Albert senior Lauren Williams has had a lot of role models between players and coaches during her volleyball career.

Eagles hope to bounce back in 2021

Three overtimes, a long delay caused by the stadium lights going out and a goal line stand made a memorable night for Lewis Central football o…

Lewis Central bowling faced a rollercoaster of a year last season with COVID complications affecting large portions of the season.

Thomas Jefferson senior Jazlynn Sanders goes up for the kill on Thursday in a match against Abraham Lincoln.

The Abraham Lincoln volleyball team huddles before a match earlier this year.