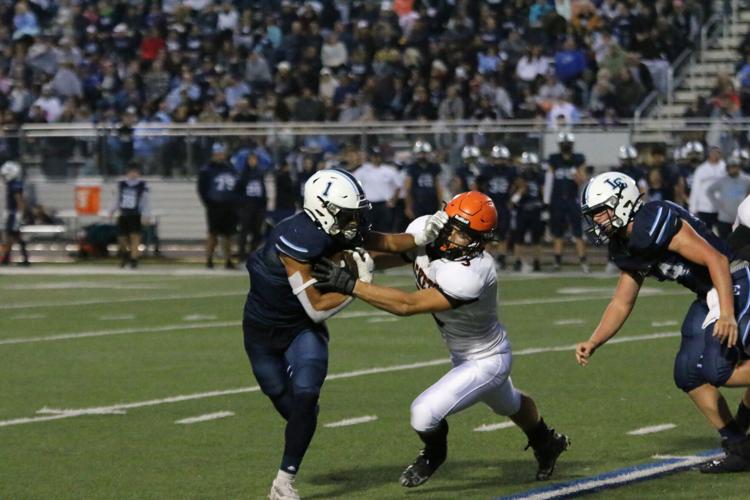 Lewis Central senior Jonathan Humpal puts on the stiff arm during a 62-0 win for L.C. on Friday night at home against Thomas Jefferson 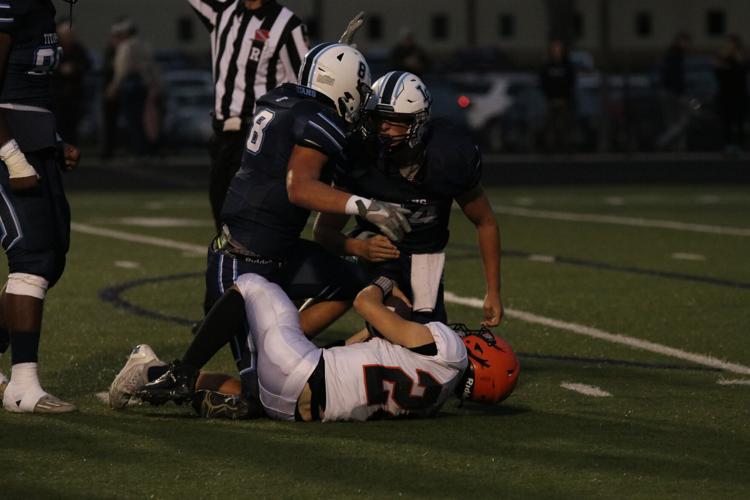 Lewis Central junior Owen Thomas celebrates with a teammate after making a tackle. 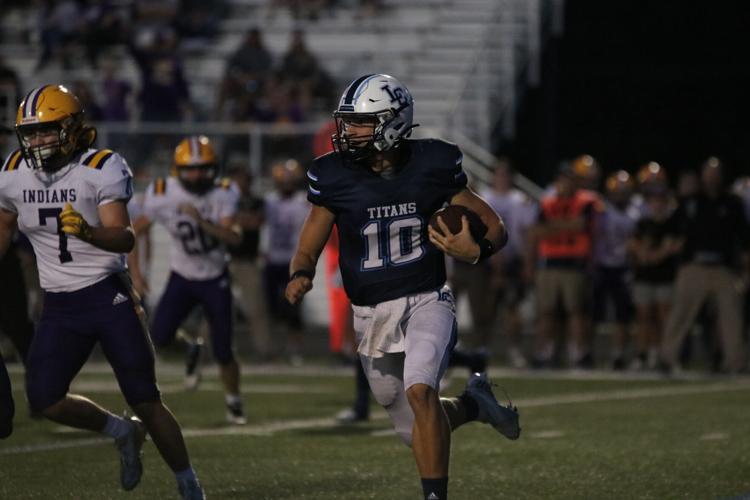 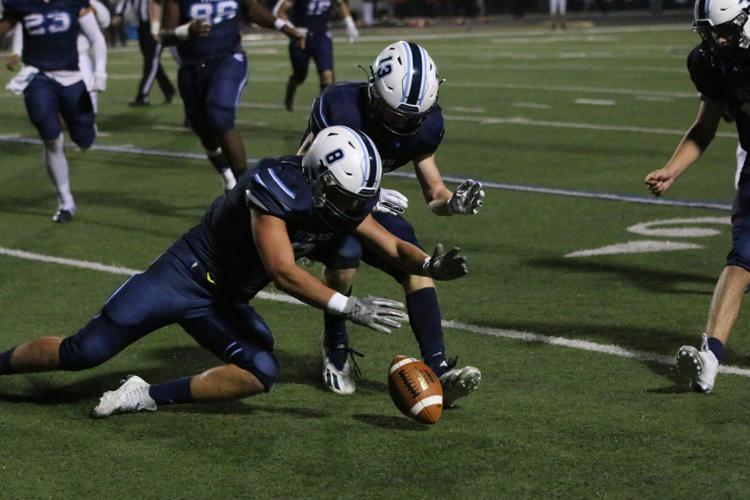 Class 4A No. 1 Lewis Central jumped out to an early lead and never looked back in a 62-0 win over Thomas Jefferson on Friday night to earn the homecoming victory.

“I’m extremely proud of just their attention to detail and their willingness to stay focused with all the homecoming activates and everything that’s going on,” L.C. head coach Justin Kammrad said. “To not lose sight of what the goal was, we set out and the biggest thing was district opener. We wanted to be 1-0 after that and that’s exactly what we did. We’re taking it step by step each week and just trying to get better.”

Thomas Jefferson’s defense did what it could on the first drive, forcing a tackle for a loss on the second play, but Lewis Central senior quarterback Braylon Kammrad completed two straight passes and senior running back Jonathan Humpal broke a 35-yard touchdown run to give the Titans a 7-0 lead.

Thomas Jefferson senior running back Deven Bovee broke a 55-yard run on the first play of the following possession but the next snap sailed over the quarterback’s head. Thomas Jefferson saw its field goal fall short three plays later.

It didn’t take long for the Titans to extend their lead as Kammrad completed three passes for 69 yards and Humpal scored from three yards out to give his team a 14-0 lead.

Lewis Central continued to roll on its next drive when Kammrad connected with Parker Heller on a 33-yard pass to extend the lead to 21 points. Thomas Jefferson did force a turnover on downs on L.C.’s next possession.

“It’s always good to get a win,” Braylon Kammrad said. “The backups deserved it, they worked their tails off and the scout team. Giving them the chance to go out there is good for them. … We have that 1-0 mentality each and every week and to start off strong is always good.”

Humpal scored with nine minutes left in the half from five yards away to give Lewis Central a 28-0 lead.

Lewis Central sophomore quarterback Brady Hetzel connected with senior Karsen Lea for 27 yards to give the Titans a 35-0 lead. Sophomore Chance Chappell scored a 7-yard touchdown with 2:35 left in the first half.

Junior A.J. Henderson scored an 8-yard score to open the second half. Hetzel scored on a 22-yard rush to give Lewis Central a 56-0 lead.

“We just have to continue to stay consistent in all aspects, offense, defense and special teams,” Justin Kammrad said. “We talk about growing and developing and that kind of stuff. We’re doing that. We’re coming along nicely. We’re getting some guys some opportunities, that’s what we’re looking for. If we’re going to reach all of our goals we have to continue to do that.

“… Friday night lights is what it’s all about. For all those young guys they put in just as much work as the older guys. We told our guys at the beginning of the week, we need to have the ability to get some of these other guys on film to see what they can do. They played well and did some awesome things. It’s a business approach for us during this game.”

Despite the loss, Thomas Jefferson head coach Kevin Culjat was pleased with his team’s fight.

“Obviously we were overmatched and we knew that,” he said. “We challenged our kids to just come out and play really hard and to be honest, I know the score didn’t indicate it, I thought we played one of the better first quarters. The coaches came out with a pretty good game plan with what we had and some kids did some nice things. I thought we played physical, we tackled. They just have better playmakers. We’re young on the backside and they have the best quarterback in the state. Those things are going to happen.”

St. Albert football struggled to hold on to the ball in a 38-0 loss at Earlham on Friday.

PREP FOOTBALL: No. 2 Maroons down Lynx

Class 5A No. 2 West Des Moines Valley proved to be too much for Abraham Lincoln in a 52-0 win in Council Bluffs on Friday night. The Lynx stru…

When Kate Jackson graduated from Lewis Central High School she didn’t expect a career in the sports media industry, but found herself working …

Treynor boys cross country finished with three runners in the top four of the Tri-Center invite on Thursday to take the team title with 47 points.

Lewis Central swimming finished sixth place out of nine at the Tiger Tankers at West Des Moines Valley on Saturday.

VOLLEYBALL: Local prep and college volleyball in action over weekend

Aaron Rodgers has his say on the NFL's greatest ever coach

Aaron Rodgers has his say on the NFL's greatest ever coach

Lewis Central senior Jonathan Humpal puts on the stiff arm during a 62-0 win for L.C. on Friday night at home against Thomas Jefferson

Lewis Central junior Owen Thomas celebrates with a teammate after making a tackle.