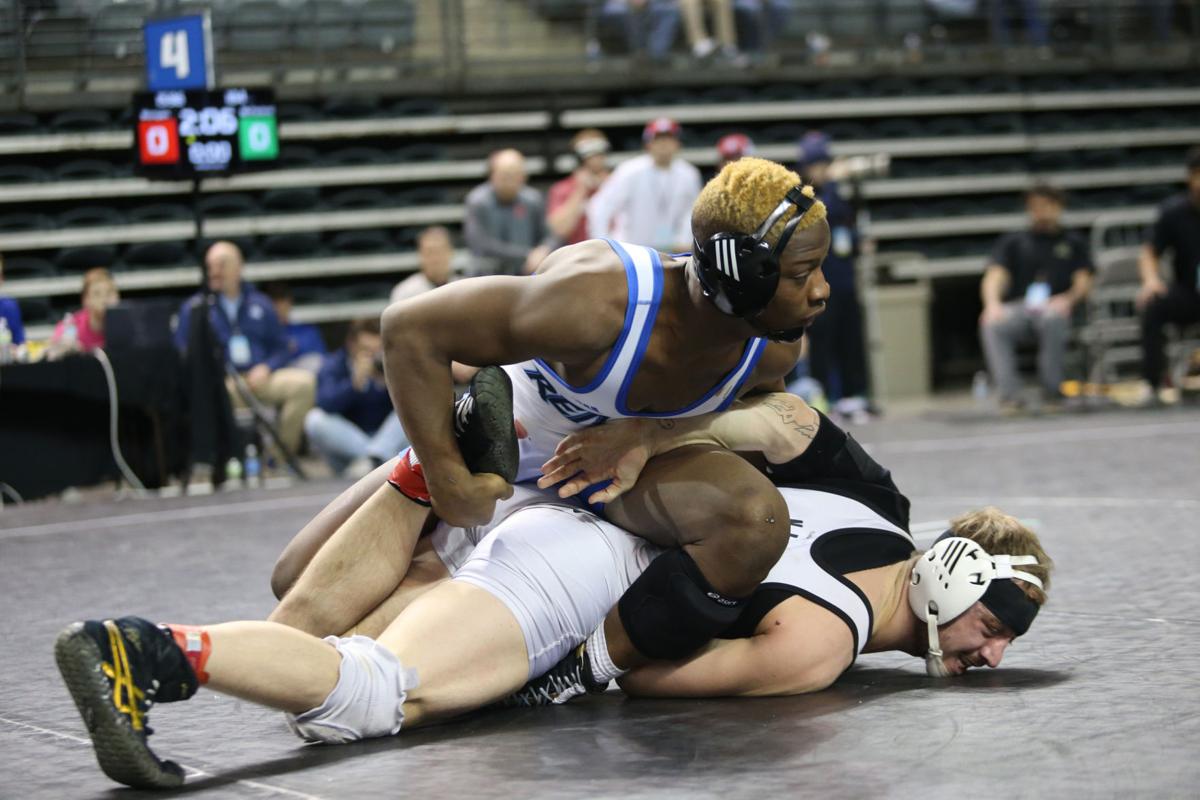 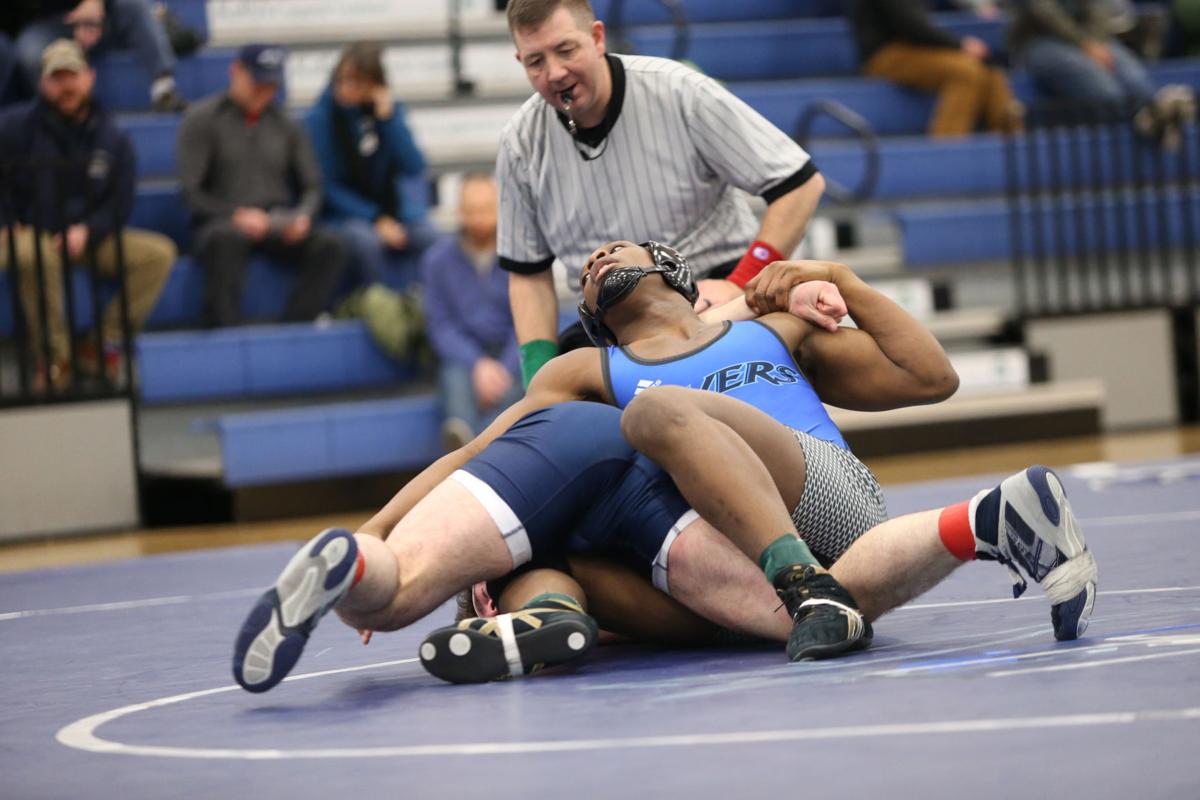 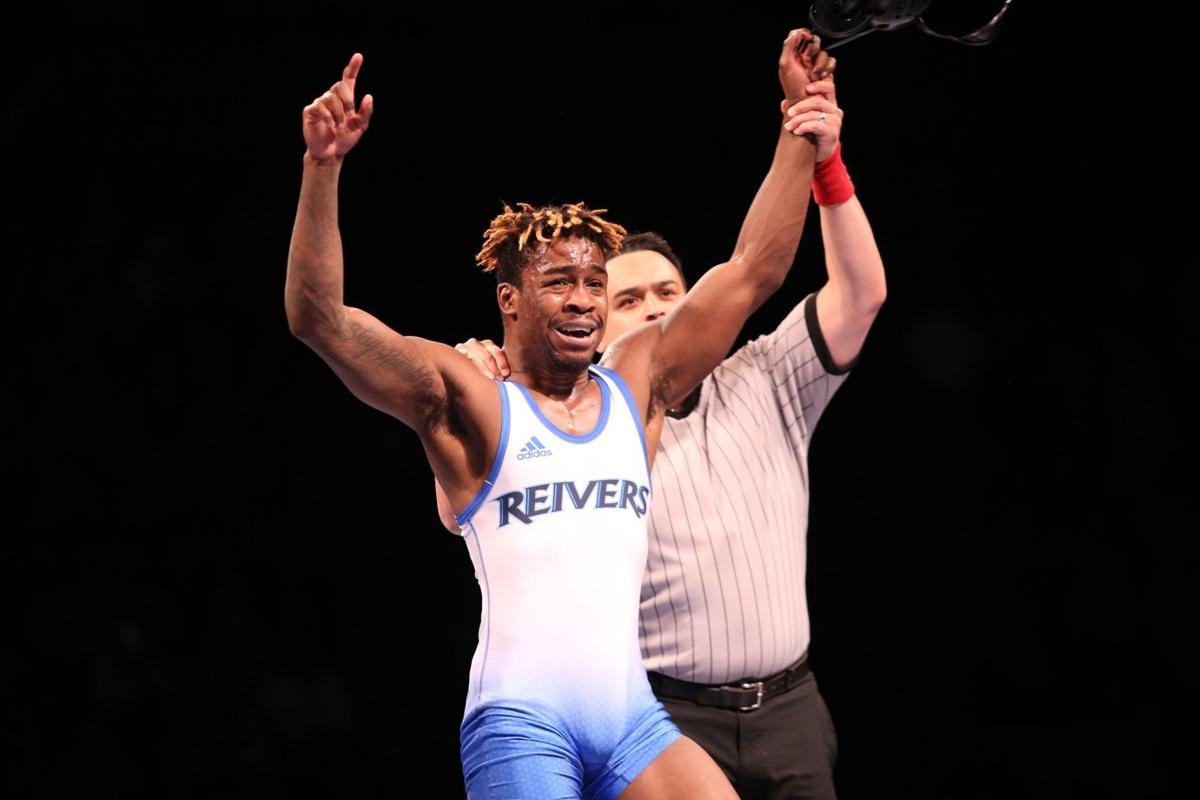 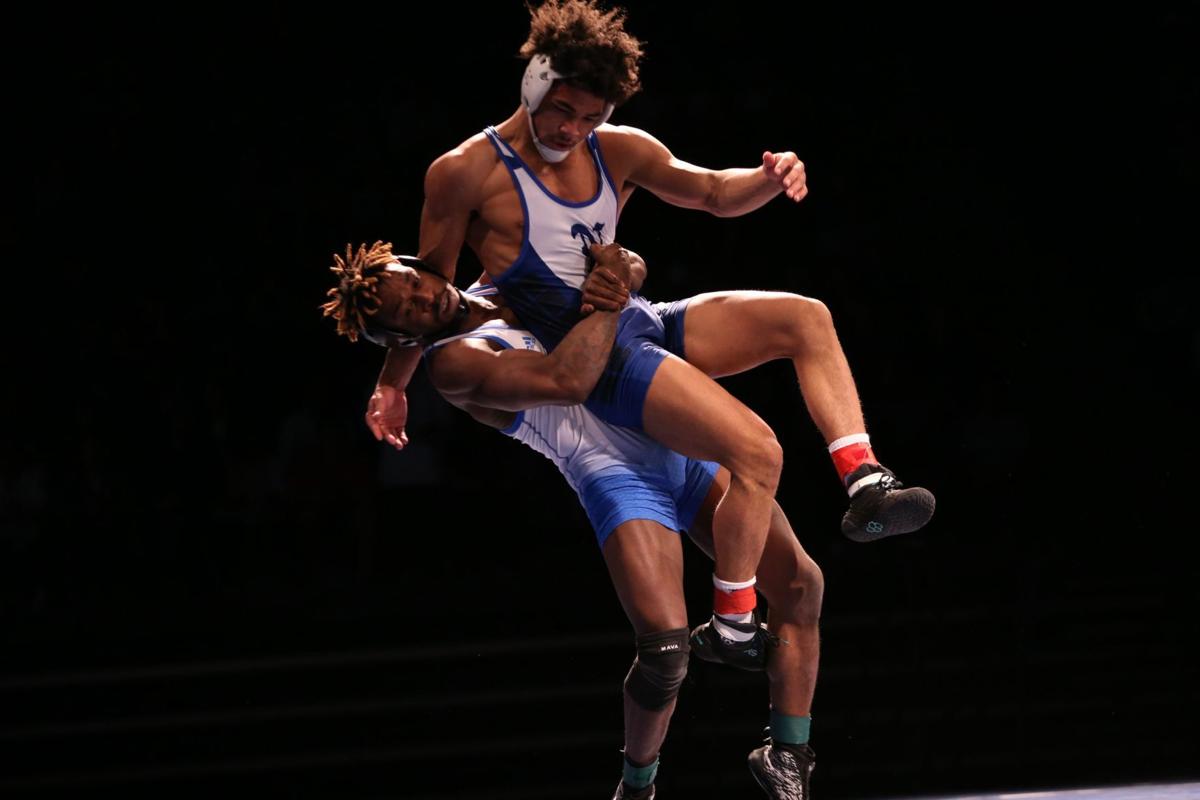 Iowa Western Community College 165-pounder Isaiah Crosby (left) takes down Christian Minto of NIACCC during the NJCAA tournament on March 7, 2020. Below at left, Crosby celebrats after winning a national title last season. Below at right, Josh McFarland of Iowa Western (top) battles Hayden Wempen of Northeastern at 184 pounds at the tournament.

Sports are finally returning at Iowa Western and athletes are more than eager to finally get out on the field, the court or, in this case, the mat to compete again.

Of all the Reiver athletics, wrestling may arguably have one of the most, if not the most, experienced squads this year.

The Reivers return one NJCAA national champion and four total all-Americans. Isaiah Crosby was the champion at 165 pounds, and is joined in returning to the squad by Chance Fry at 157, Josh McFarland at 184 and Dillyn Miller at heavyweight. Expectations will be high once again for this program.

“We’re probably going to be a sophomore dominated group for the first time in our 10 years,” coach Josh Watts said. “We’re always striving to bring home a national title, and that’s been the primary focus, especially for this sophomore group.”

“Before they leave I know they all really want to win a national title, but generally our focus is just to get better on a day-to-day basis and hope that it accumulates to something great in the end.”

The wrestling team officially began training and practices on Jan. 4. While COVID-19 precautions still add a bit of an abnormal feeling, having a sophomore heavy group is helping make practices move right along.

“It’s nice to get to some sort of normality,” Watts said. “Obviously the training and how we are going about the training is a bit different, but the guys are excited to get to compete, things fortunately have been pretty consistent through the first semester and up to now, so we’re looking forward to getting on the mat competition wise and see where we are at.”

The Reivers will have to wait a moment before they get to take on their first challenge, which will be at Iowa Lakes on Feb. 4. With a sophomore-heavy team Watts and the Reivers are looking to just pick up were they left off last season.

“Usually with freshmen, you have to re-lay your program’s foundation each year,” Watts said. “This year our foundation is pretty much laid out and now we can build off it and get into more advanced drills and techniques, stuff like that.”

“So far far it’s been a lot of fun advancing these guys, keeping them moving forward. I think with the experience that we have on our roster there’s more advanced things that we can do with this dedicated and hard working group.”

As of Wednesday, it is anticipated that fans and spectators will not be permitted to attend. However, Watts commented that the topic will potentially be reviewed and reassessed on Feb. 1.

IOWA CITY — With just under five minutes remaining in Monday’s game against Purdue, the Iowa women’s basketball team found itself in familiar …

Iowa Western Community College 165-pounder Isaiah Crosby (left) takes down Christian Minto of NIACCC during the NJCAA tournament on March 7, 2020. Below at left, Crosby celebrats after winning a national title last season. Below at right, Josh McFarland of Iowa Western (top) battles Hayden Wempen of Northeastern at 184 pounds at the tournament.