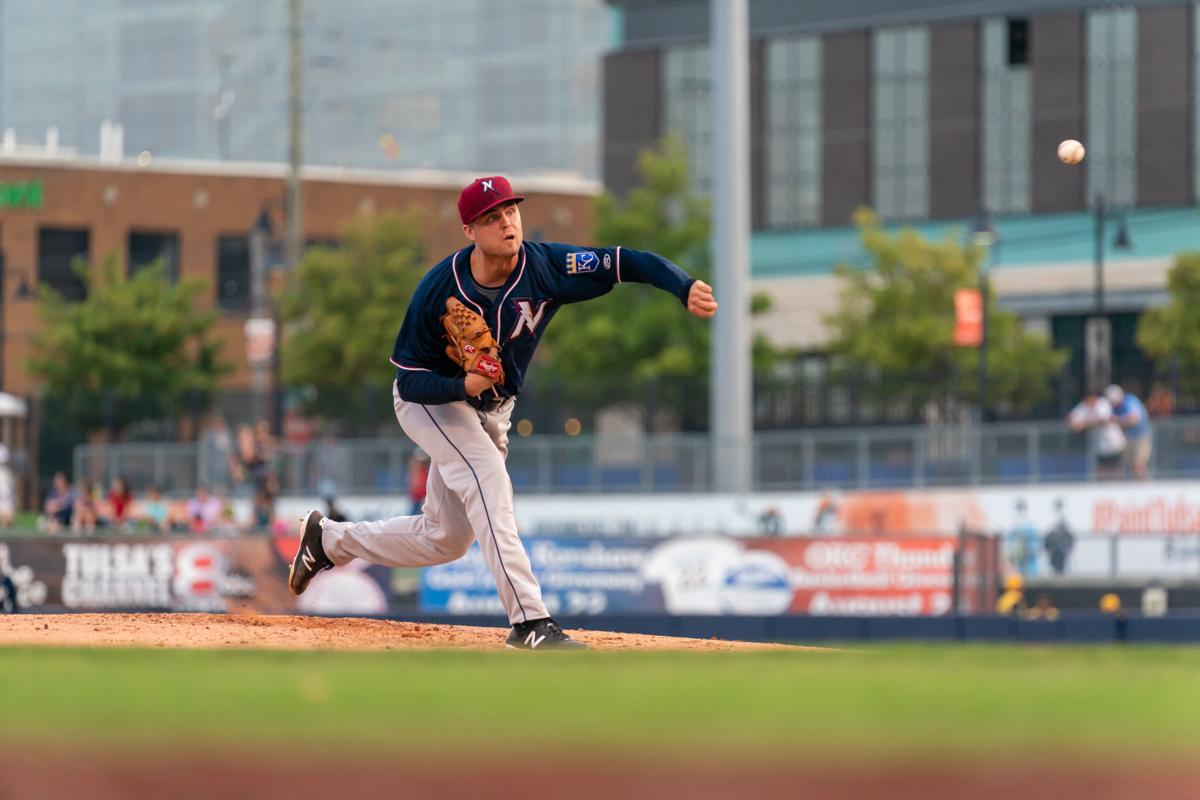 Northwest Arkansas Naturals pitcher Daniel Tillo pitches against the Tulsa Drillers on Aug. 1, 2019, in Tulsa, Oklahoma. The Sioux City native and former Iowa Western standout was a 2017 third-round draft pick by the Kansas City Royals. He hopes to continue moving up in the Royals’ farm system, but like many across the country is currently at home due to the COVID-19 pandemic. 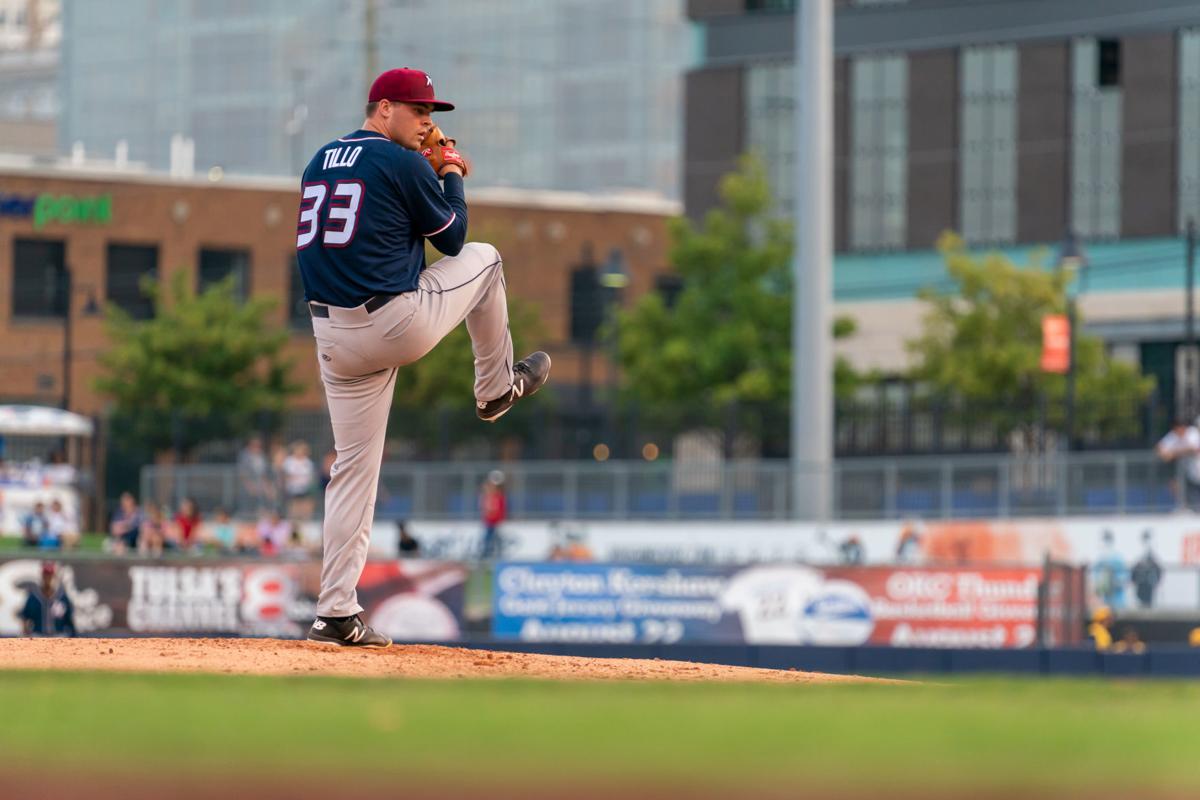 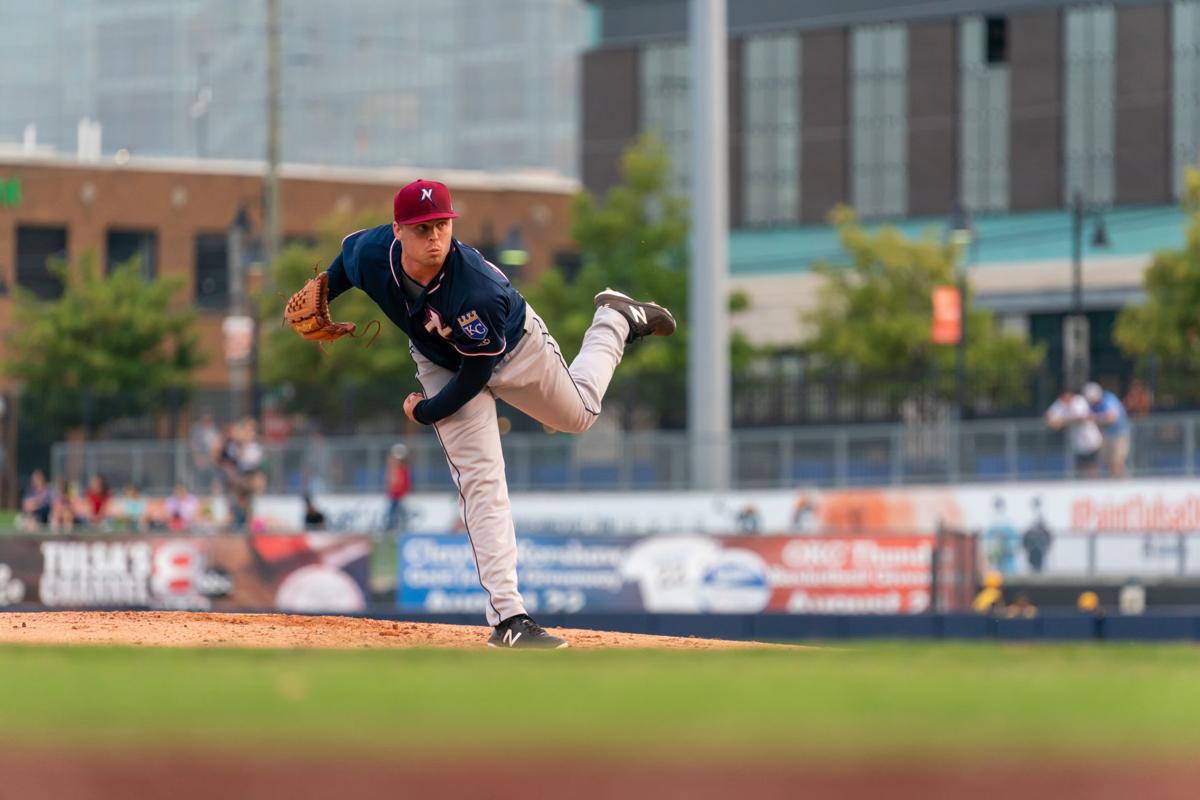 
In a way, things have come full circle for Daniel Tillo.

Just over a month ago the former Iowa Western pitcher and 2017 third-round draft pick of the Kansas City Royals was in big league camp in Surprise, Arizona. Now, because of the ongoing COVID-19 pandemic, the Sioux City native finds himself right back where it all started.

In high school at Sioux City North, the 6-foot-5 lefty was a three-sport star in football, baseball and basketball. Tillo was named Iowa’s Mr. Basketball as a senior following the 2014-15 season after averaging 24.5 points, 9.0 rebounds and 4.4 assists. Tillo opted to pursue baseball collegiately, first going to Kentucky before transferring to Iowa Western, where he was selected 90th overall in 2017.

“It was my 21st birthday the day I got drafted, so it was definitely one to remember,” Tillo said. “I had a lot of buddies and my brothers over. It was definitely an incredible feeling to get that text from my agent saying the Royals are picking you up. I heard it live on the broadcast. It was just a dream come true and I’ll never forget that moment.”

Since then, Tillo has worked his way through the Royals’ farm system, last year playing mostly for the high-A Wilmington Blue Rocks before a call-up to the double-A Northwest Arkansas Naturals. Between the two stops, Tillo pitched 130 2/3 innings, going 8-9 with a 3.72 ERA, striking out 85 while walking 54. Starting in fall rookie ball in 2017, each step up provides new challenges.

“The hitters are more experienced and their plate discipline is a lot better. The hitters don’t swing at bad pitches. As you go up, it kind of seems like the strike zone gets smaller,” Tillo said. “I just want to be more consistent in the strike zone. Obviously, I walk a good amount of people and I need to cut back on that. That’s something that could possibly hold me back from getting a big league call. I’ve got to get ahead in counts and tone it down with the walks.”

Three seasons of minor league baseball has shown Tillo what it takes to be a professional baseball player, both physically and mentally.

“It’s just a grind. Every single day you’re at the field five, six hours before the game. You’ve got to lift or run every single day, get a pregame catch in. You might have a 10-hour bus ride after a game and drive through the night. The buses aren’t the most comfortable at all. They’re rather uncomfortable if I’m being honest,” he said. “It’s a long season and you’ve got to be mentally strong. Having your mental game correct is a big part of it. I try to look at the positives and attack each day. If you ask my teammates they’d probably say I’m one of the louder guys in the locker room and I bring a lot of energy. It’s not as fun if you’re going to be quiet and dead in the locker room. You might as well bring a spark and get everyone fired up to play some baseball.”

The Royals front office thought highly enough of Tillo to make him a non-roster invitee to this year’s big league spring training camp in Arizona. One of the perks was listening to former Cardinals skipper and first-year Royals manager Mike Matheny address the team each day.

“It was good to hear Mike Matheny’s voice every single day in the morning during our team meeting. He has a presence in the room,” Tillo said. “It’s just awesome to be around veterans and guys that have been in the big leagues for over 10 years just to see what they do to prepare and be ready each and every day to play baseball. It’s just a lot of fun to be around. It’s also great to be around the teammates I’ve played with for a few years now. We’ve come up together and we’re trying to be the future in Kansas City. It was a great experience and it will show during the season.”

However, this year’s spring training was short-lived as Major League Baseball suspended operations and sent everyone home in mid-March because of COVID-19.

“I get phone calls almost every day from coaches in the Royals organization asking me how I’m doing and if I’m getting my work in, stuff like that. The communication has been really good, but there’s nothing set as far as coming back until (MLB Commissioner Rob Manfred) says something,” Tillo said.

When baseball does resume, Tillo isn’t sure where he’ll be, but thinks Northwest Arkansas or Triple-A Omaha are the two most likely scenarios. And while there have been some perks to being home, Tillo hopes to get back on the field soon.

“It has been cool. Last week when it snowed, maybe it wasn’t so cool being home,” Tillo said with a laugh. “You can’t get enough family time and it’s been fun seeing the nieces and nephews. It’s been good being home, but I am ready to play some baseball and get back on the mound and compete.”

DES MOINES (AP) — Two southeast Iowa teenagers charged with first-degree murder and conspiracy to commit murder in the death of their high school Spanish teacher asked a state court judge Tuesday to lower their bond so they could be released from jail, while prosecutors asked it be maintained at $1 million or even raised to $2 million.

DES MOINES, Iowa (AP) — Two southeast Iowa teenagers charged with first-degree murder and conspiracy to commit murder in the death of their high school Spanish teacher asked a state court judge Tuesday to lower their bond so they could be released from jail, while prosecutors asked it be maintained at $1 million or even raised to $2 million.

So much to be decided heading into this week's Thanksgiving college football feast.

'Avengers: Endgame' star Jeremy Renner has revealed why he has no plans to ever watch the movie for a second time.

Jeremy Renner hails Paul Rudd as the 'most tremendous man around'

Jeremy Renner has given his opinion on Paul Rudd being crowned the sexiest man alive by People magazine.

Northwest Arkansas Naturals pitcher Daniel Tillo pitches against the Tulsa Drillers on Aug. 1, 2019, in Tulsa, Oklahoma. The Sioux City native and former Iowa Western standout was a 2017 third-round draft pick by the Kansas City Royals. He hopes to continue moving up in the Royals’ farm system, but like many across the country is currently at home due to the COVID-19 pandemic.