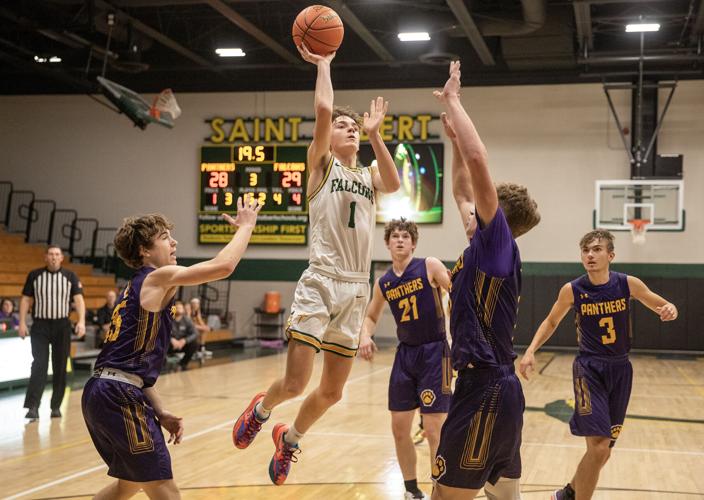 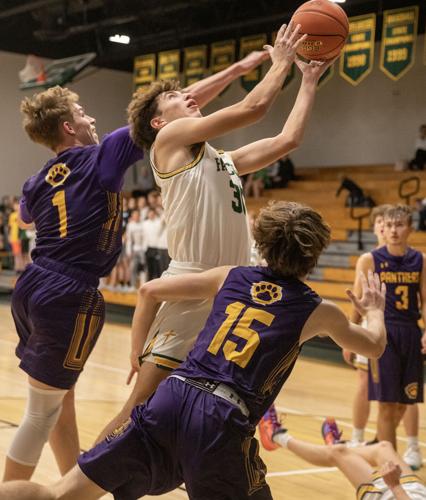 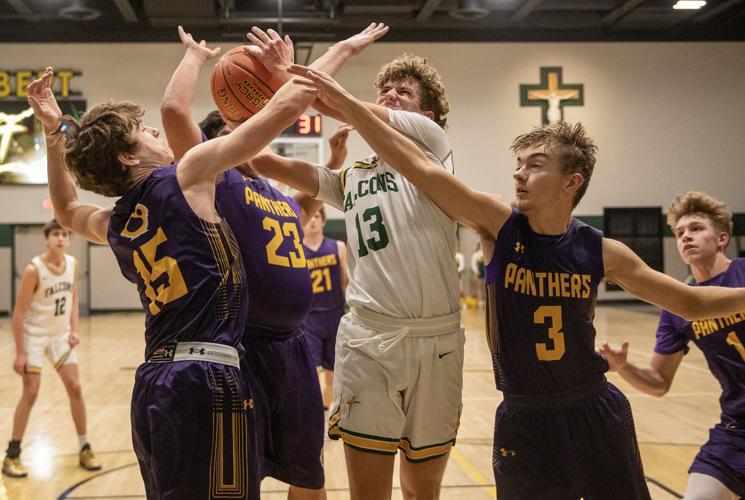 “It’s great to get the first win for sure,” Peterson said. “We’re not going to take this win for granted. We got some guys who just need some varsity minutes but will get better. We didn’t shoot the ball very well, but I mostly attribute that to some nerves and first-game jitters. Other than Colin (Lillie) we got a lot of guys who never and had very little experience at the varsity level play tonight.”

The Panthers and Falcons went neck and neck through the first quarter and finished a very low scoring first half at 15-11 in favor of the Falcons.

A 10-2 run to start the third quarter helped the Falcons create some brief separation, but the Panthers immediately responded with a 9-0 run to get back within three points 25-22 midway through the third quarter.

The Panthers would make it just a one-point ball game by the end of the third quarter but a late 9-2 run for the Falcons put the game away and earned St. Albert its first win of the season after an intense fourth quarter.

“We came out in the second half and made some good runs,” Peterson said. “I thought we handled their runs very well, but in the end, we held on and got the win. I’m really proud of how these guys hung in there and came out with this win.”

Three Falcons scored double digits in the win. Leading the way was junior Luke Wettengel with 13 points, following right behind him was freshman Nick Ballenger with 12 points, and senior Colin Lillie had 11 points.

St. Albert will play again on Friday to open Hawkeye 10 Conference play against Clarinda at 7:30 p.m.

The Abraham Lincoln Lynx used a big fourth-quarter run to hand Class B No. 2 Platteview its second defeat of the season in a thrilling game at…

Denison-Schleswig earned a Hawkeye 10 win over Lewis Central and their former coach Ricky Torres 70-58 on Tuesday night in Council Bluffs.

No. 17 Baylor beats No. 9 Kansas in matchup of last 2 champs

LJ Cryer had 22 points with five 3-pointers and 17th-ranked Baylor stretched its Big 12-best winning streak to five games with a 75-69 win over No. 9 Kansas. It was a matchup of the last two national champions.

Damian Dunn scored 16 points and made the go-ahead free throw as Kur Jongkuch blocked Houston’s go-ahead attempt in the final seconds as Temple held on and defeated the top-ranked Cougars 56-55 on Sunday.

Breanna Stewart is the biggest WNBA free agent on the market this offseason and the former MVP has a host of teams courting her, including the Seattle Storm where she's spent her entire career. She's one of five former league MVPs who are unrestricted free agents this year. Candace Parker, Nneka Ogwumike, Diana Taurasi and Tina Charles all could potentially change teams in the coming weeks. Brittney Griner, who was returned to the U.S. last month in a prisoner swap after her 10-month saga in Russia, has said that she'll remain in Phoenix.

Someone will win NBA Defensive Player of the Year this spring, even after a season where no one seems to be able to stop or even slow down anyone with the ball. It’s almost certain that more players will average 20 points per game than ever before.

It may be time to re-think NBA All-Star voting

Rookie Chet Holmgren got hurt last summer and will miss the entirety of this season. But evidently, his rehab has been going extremely well since four NBA players say he should start next month’s All-Star Game. It doesn't make much sense, but the voting by NBA players for their own All-Star Game rarely does.

Starting players around the NBA are sacrificing their minutes with the first team to better the backups.

Souley Boum scored 21 points, Colby Jones added 20 and No. 13 Xavier went on the road and held off No. 19 Connecticut 82-79, plus other Top 25 action from around college basketball on Wednesday.

IOC to allow Russian athletes to compete In 2024 Olympics

This Day in History: First Winter Olympics take place in the French Alps

This Day in History: First Winter Olympics take place in the French Alps