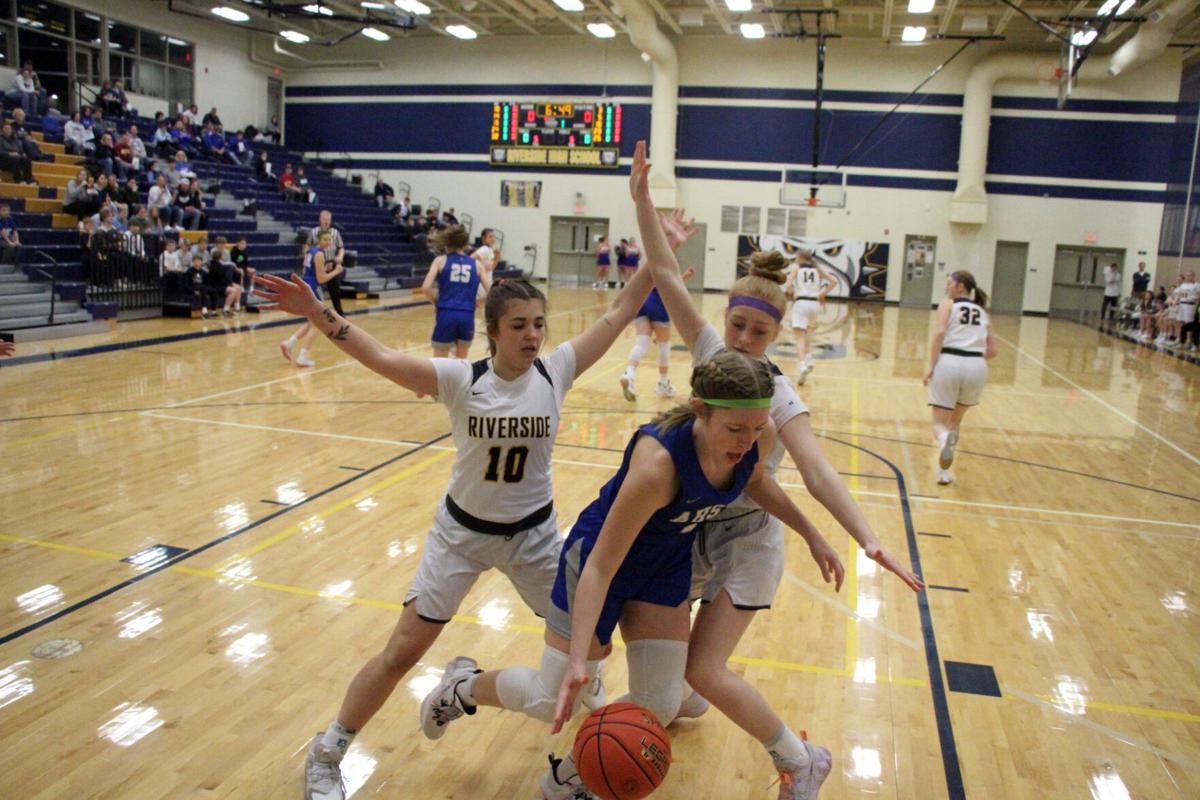 AHSTW sophomore Saydi Paulsen is double teamed by a pair of Bulldog defenders after a steal. 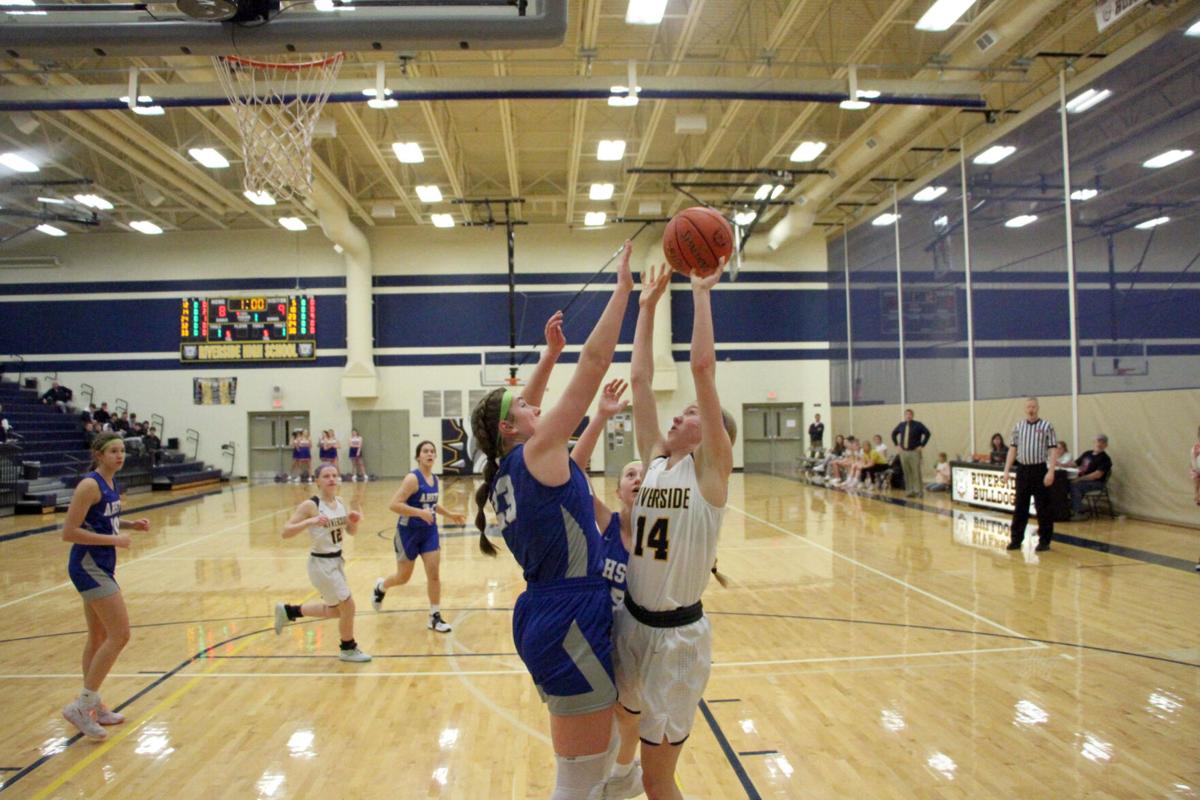 Riverside freshman Elly Henderson puts up a contested shot in the first quarter. Henderson had 13 points for the Bulldogs. 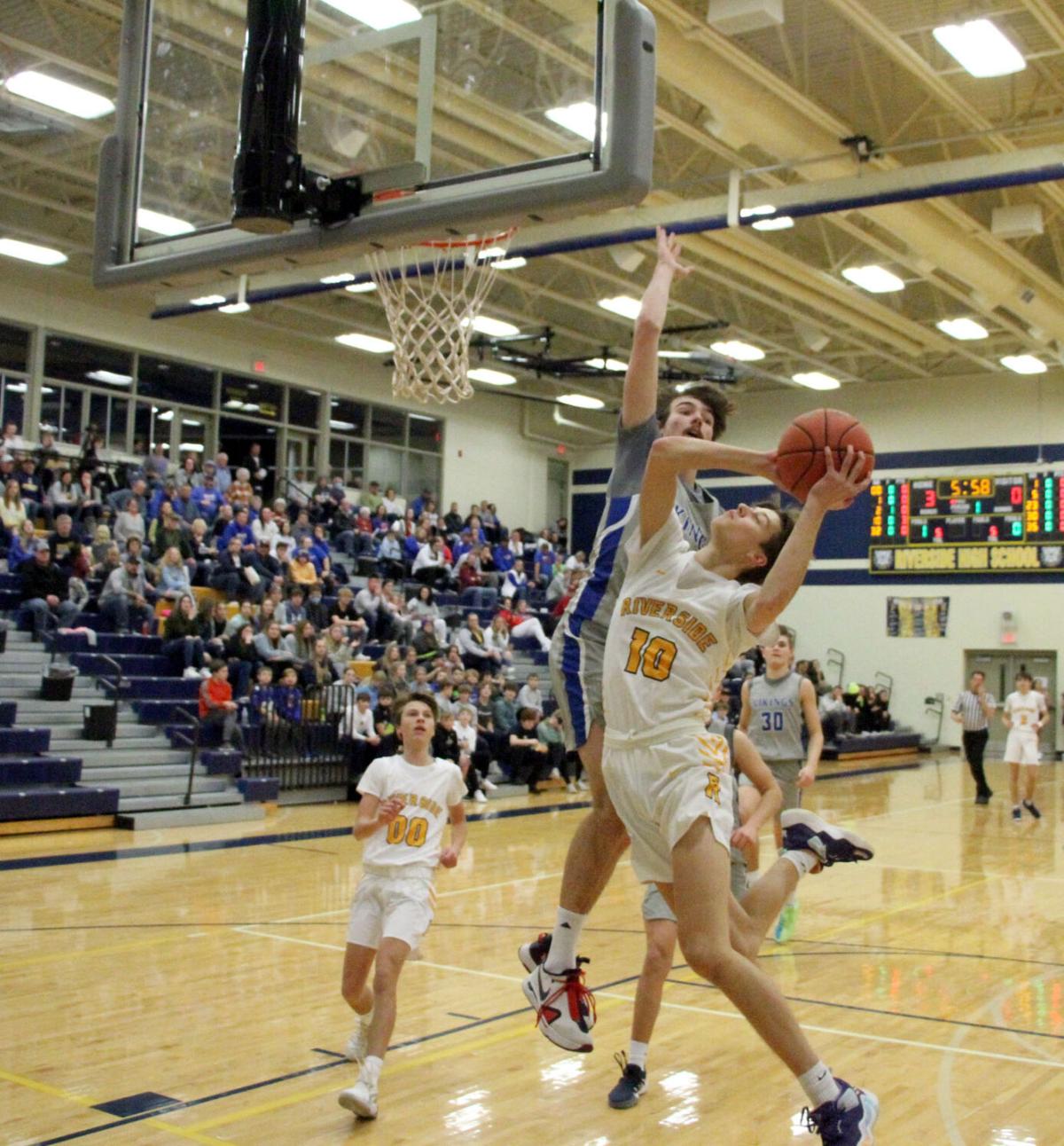 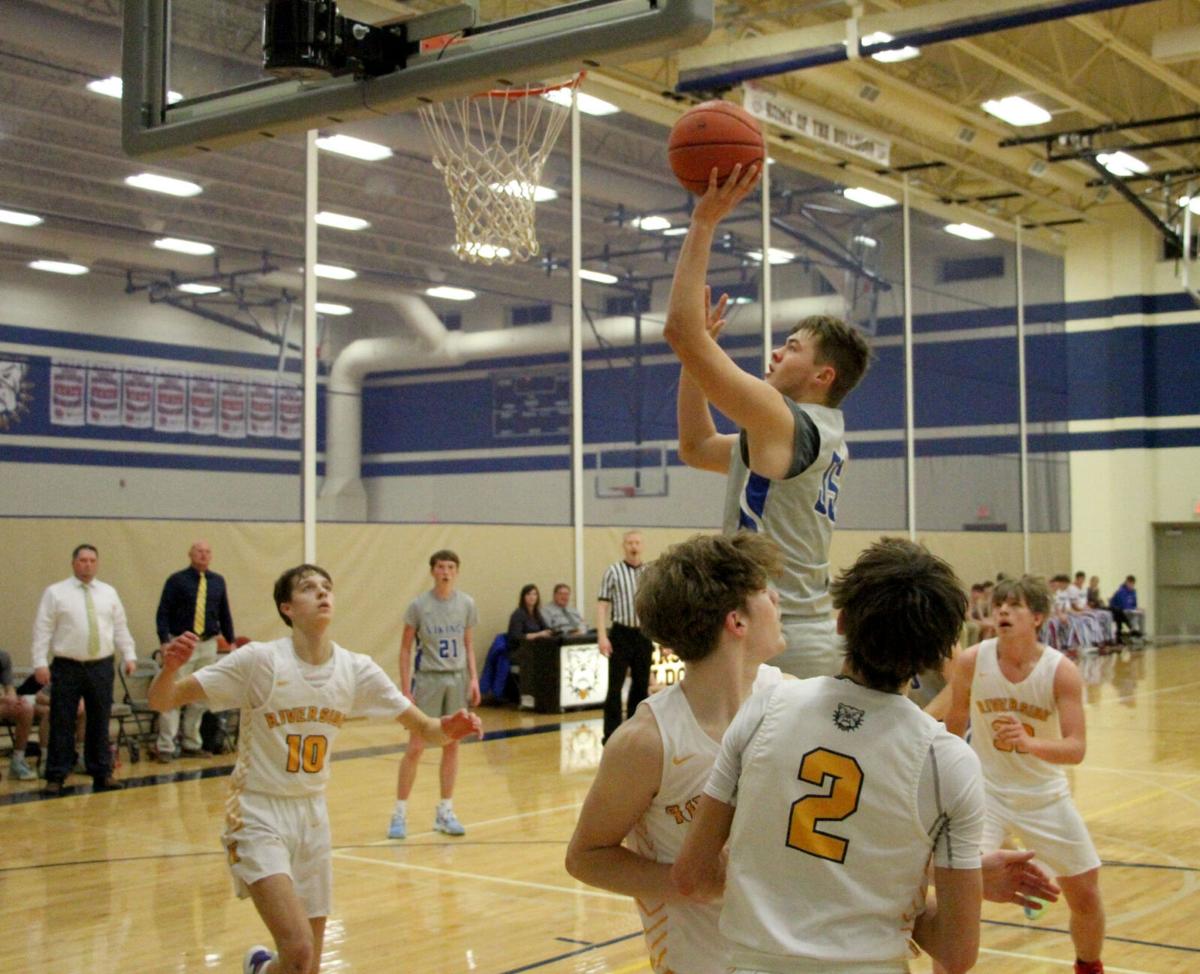 OAKLAND — AHSTW and Riverside boys and girls basketball split a pair of games on Tuesday night in the Western Iowa Conference, where the Riverside girls defeated AHSTW 36-29, and Class A No. 5 AHSTW boys pulled away late to beat Riverside 60-43.

“These girls have really been working hard lately,” Bulldogs coach Mitch Rice said. “I told the girls at halftime again, AHSTW was going to give us their best shot. When they do how are we going to respond, because in years past we’ve had trouble responding back, but tonight we took their best shot and countered it with a run of our own.”

The Lady Vikes weren’t going down quietly. AHSTW went on an 8-0 run to tie the game at 24-24 with a little over two minutes to go in the third. However, the Bulldogs answered by scoring the next five points to close the quarter, thus holding a 29-24 lead heading into the fourth quarter.

The Bulldogs would hang on through a scrappy fourth quarter to defeat AHSTW for the first time since February 2014.

“Once they made the game close again we just tried to push the tempo,” Bulldog freshman Elly Henderson said. “It helped us spark a run and then we slowed down again and just ran out the clock and it feels good to get another win.”

Vikings pull away from Bulldogs

Despite the Viking’s lowest-scoring first quarter of the season, AHSTW pulled away in the second half to beat Riverside 60-43 in Oakland on Tuesday night.

“This was a weird game with a very weird flow,” Vikings coach G.G. Harris said. “Big-time credit goes to Riverside. They played well, they took care of the ball really well and their 1-3-1 zone gets better every game and that defense made it hard for us to get into a flow. But this is a game of runs and once we got some consecutive stops and made some buckets, we felt more comfortable.”

The boy’s game started slow offensively. Riverside began with a 6-2 lead which held up until about three minutes to go in the quarter when the Vikings sank back to back threes. Riverside would answer to make it 8-8 by the end of the first quarter.

The Vikings would create as big as an eight-point lead eventually thanks to a 10-2 run midway through the second quarter, but the Bulldogs hit a late trey to bring it down to five, 25-20 at halftime in favor of AHSTW.

“Things were tough for a little bit offensively,” junior Brayden Lund said. “We started to pick things up a bit and moving around more and that created some better shots around the rim and I think that really helped open up the outside shooting and got us into our normal rhythm. ”

The Vikings went on a 10-1 run late in the third quarter and would lead by as much as 20 points in the fourth quarter to pull away from the upset-minded Bulldogs.

St. Albert boys basketball got off to a fast start on Saturday afternoon as five Falcons scored in double figures to create separation from We…

During the Tokyo Olympics, when Damian Lillard's abdominal injury flared up, Jrue Holiday suggested it was time for surgery.

DALLAS (AP) — Devin Booker scored 28 points, Chris Paul had 20 points and 11 assists with no turnovers, and the Phoenix Suns rallied late to beat the Dallas Mavericks 109-101 on Thursday night.

Innovative insulation unveiled for Team USA ahead of Winter Olympics

Brawl breaks out between Cowboys, 49ers fans outside AT&T Stadium

Brawl breaks out between Cowboys, 49ers fans outside AT&T Stadium

These rare photos show Tom Brady from his baseball days

These rare photos show Tom Brady from his baseball days

AHSTW sophomore Saydi Paulsen is double teamed by a pair of Bulldog defenders after a steal.

Riverside freshman Elly Henderson puts up a contested shot in the first quarter. Henderson had 13 points for the Bulldogs.