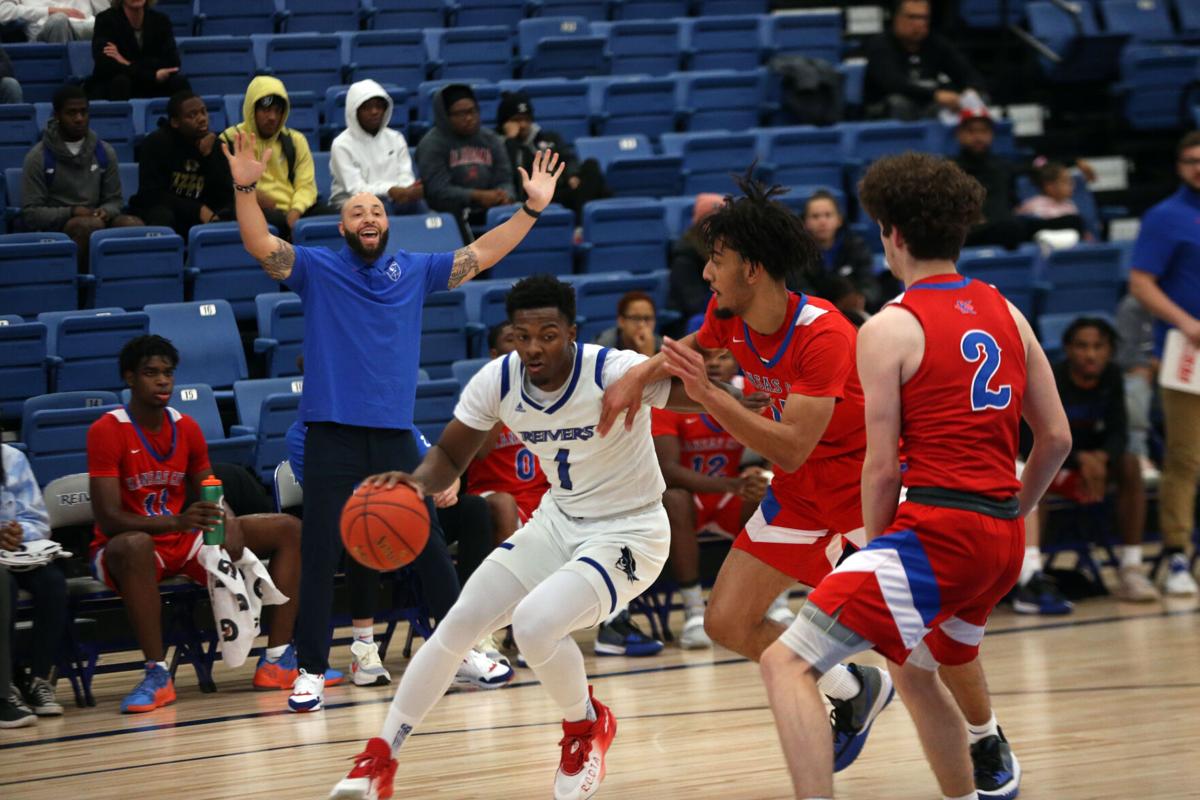 Roland McCoy (No. 1) drives to the basket for IWCC. 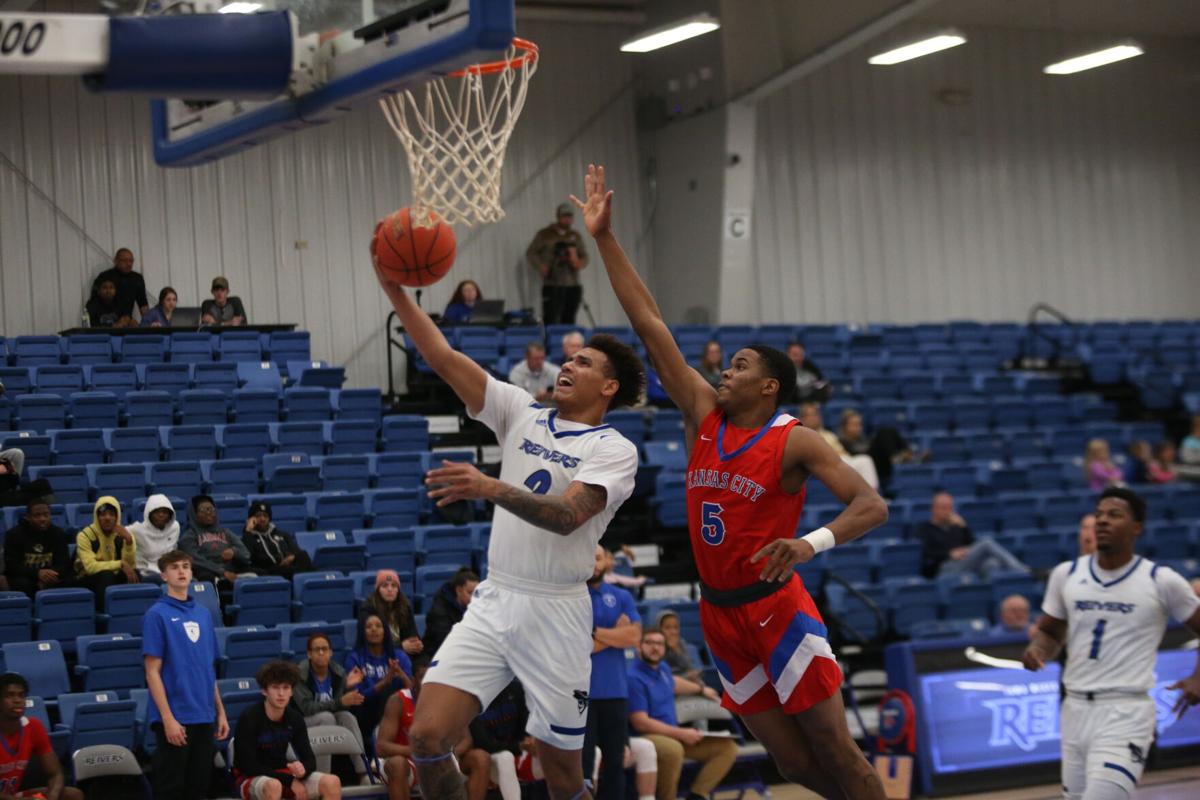 Malik Brooks (No. 2) of IWCC scores on Caleb Jones of KCKCC. 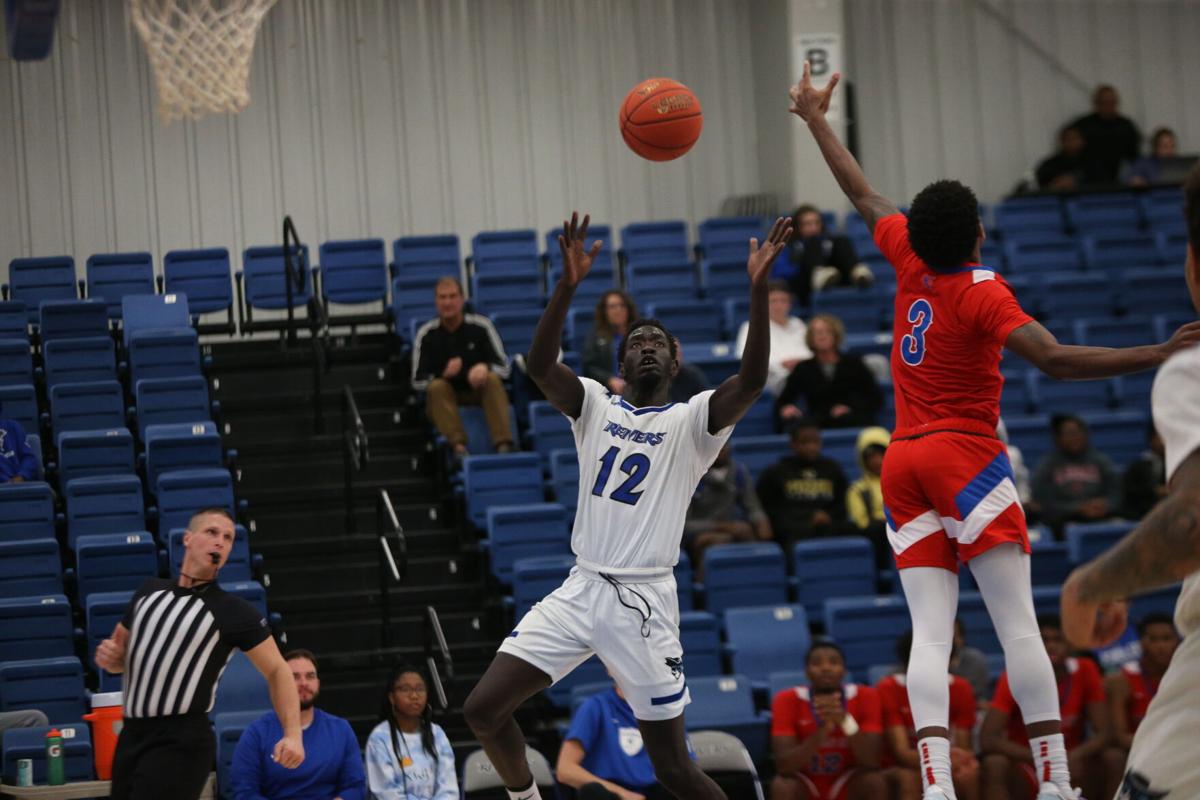 Odier Olange (No. 12) of IWCC goes high for a loose ball. 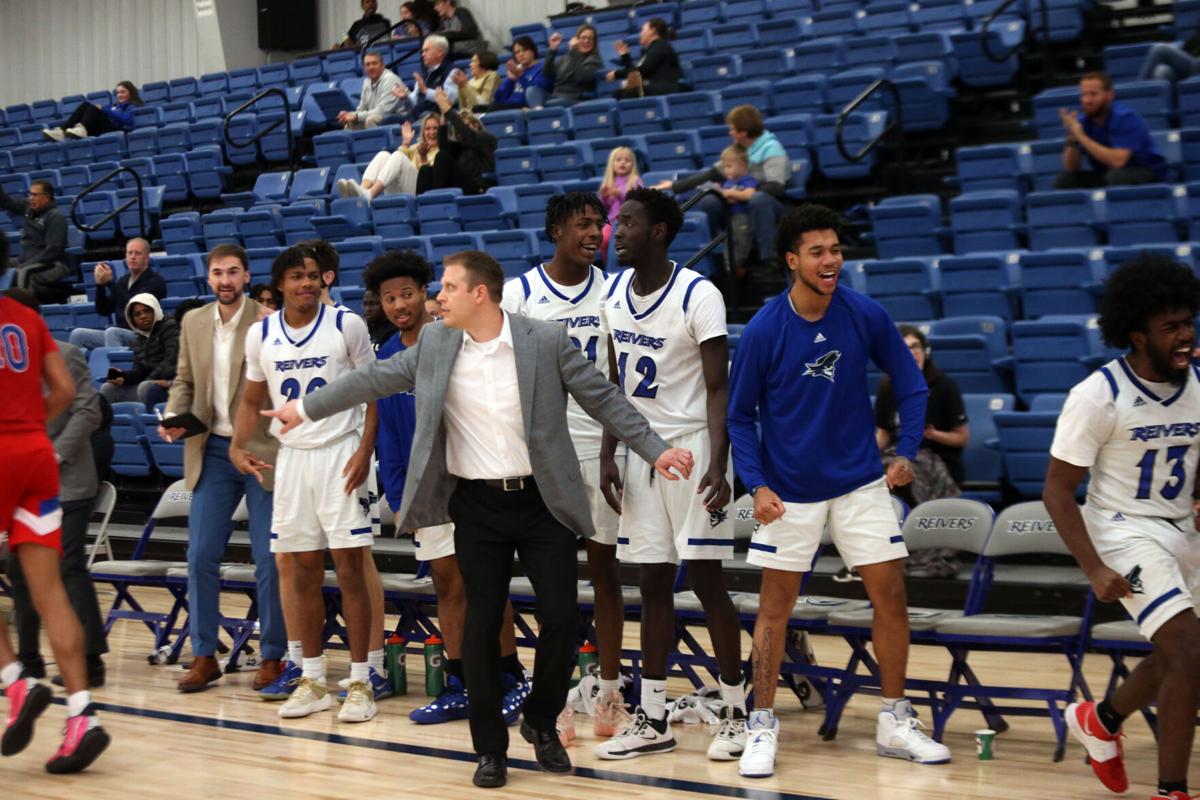 In a rematch of two teams that met just 11 days earlier, No. 8 Iowa Western took the court against Kansas City Kansas College on Tuesday night.

Once again these two teams stayed neck and neck the whole way, but once again it was the Reivers coming out with the win, 81-72 in overtime.

“When you play a team for the second time you have to make adjustments,” Van Riessen said. “Each team has a better understanding of what the other team is trying to do and I think it just comes down to adjustments and counters and who executes those better. The deeper we got in this game the more comfortable I think the guys got with those adjustments.”

The Blue devils took an early 18-10 lead at the halfway point of the first half 9-3 run midway through the first half to cut it down to 21-19 with about six minutes remaining until the break. However, the Blue Devils answered by scoring 11 of the next 15 points to build a 32-23 lead.

“In the first half I thought we were very stagnant on offense,” Van Riessen said. “We just weren’t attacking the way we’re capable of doing. It seemed like we were overthinking or were just kind of numb with our flow. But in the second half, we started to move the ball better and we got some stops early which always helps spark our offense since we like to push in transition.”

Both teams came out shooting well. However, the Reivers stayed hot longer, and thanks to an early 15-4 run the Reivers took the lead 47-45, with 10 minutes left in regulation, and the two teams stayed neck and neck in a defensive slugfest for the next 26 scored points.

“We knew we had to pick it up in the second half,” Jaden Flournoy said. “We were missing some open shots, but in the second half we just regained our poise and got to the rim and the free-throw line and that’s got us going, we started making those open shots and did just enough.”

Flournoy scored 15 points and had two steals for this game.

With 20 seconds to spare the Blue Devils retook the lead 65-63 and were looking to close the game with a defensive stop, but instead, Malik Brooks drove to the basket down the left baseline for a layup to tie the game 65-65 with just 4.9 seconds to spare to force overtime.

“It was just one of our inbound plays,” Brooks said. “I got by the press and I was wide open for the pass and it turned into an easy layup. They looked a bit confused right before the play so they just got me the ball and I got the easy layup.”

Brooks finished the night with the game-high 22 points.

The Reivers came out like a team on a mission as they stopped the Blue Devils on their first four overtime possessions and Roland McCoy, who had just six points in regulation, scored the first eight points of the overtime with two three-pointers and a step-back jumper in the Reivers first three possessions to put the Reivers in command.

“I came out slow tonight, starting zero-for-five, so ya it was a slow start,” McCoy said. “It’s just a mentality thing though. I know what I’m capable of doing, I know I can make those shots and there’s no point in dwelling on my misses because you got to think about that next play and I finally got going.”

McCoy ended the night with 14 points.

The Blue Devils couldn’t find the hoop until the final two minutes of the overtime, which helped the Reivers put the Blue Devils away for the second time in two weeks.

The Reivers will return to the court on Saturday when they host Metropolitan College at 4 p.m.

The AL girls basketball team defeated the Fillies in Shenandoah to open their season 1-0. Class 2A No. 10 Treynor held TJ to just 10 points for the first half on the way to victory. And LC fell at home against Sergeant-Bluff Luton, while AHSTW lost on the road at CAM.

With just one returning starter from last season, the Lewis Central girls basketball team rolls into the season with lots of new names and fac…

No. 8 Iowa Western men’s basketball lost its first game of the season after shooting just from the floor in a 64-53 loss to Metropolitan College.

No. 10 Iowa Western women’s basketball held off the McCook Indians despite a fourth-quarter rally to bounce back into the win column with a 70…

Iowa School for the Deaf girls basketball faced a lot of adversity last year and will encounter some uphill battles this season. But head coac…

Roland McCoy (No. 1) drives to the basket for IWCC.

Malik Brooks (No. 2) of IWCC scores on Caleb Jones of KCKCC.

Odier Olange (No. 12) of IWCC goes high for a loose ball.